Is it finally summer? Dan Alexander is on the final live blog before he inevitably tops up his sun burn out in the lanes tomorrow 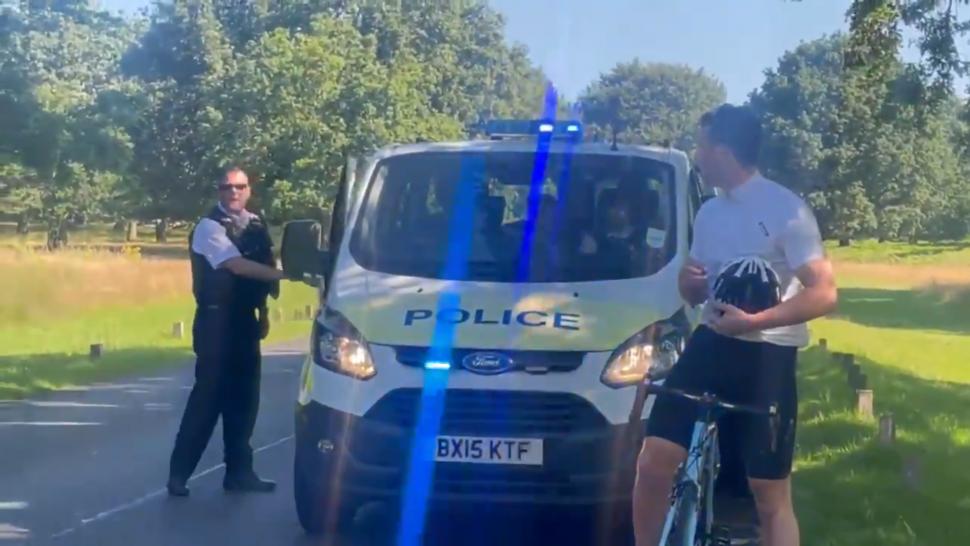 He was doing 24 mph. Please can I book that officer to sit outside my kids school where 24 mph would be my dream.

Loads of reaction for the round-up from the Richmond Park story...Labour councillor Jo Rigby hoped the officer would take his speeding senses outside her kids' school.

Over on Facebook, Sean Fullerton wrote: "I live adjacent to the Park and have ridden there since I got my first bike 50 years ago. I'm regularly overtaken by speeding motorists and also by trade vehicles yet I never heard of either of these offenders being fined. The Park should be closed to through traffic, end of!"

I'd be embarrassed to be one of the officers sitting in that van. What a waste of time.

Thought we’d get the band back together 🤣 #TDF2021 pic.twitter.com/COzAtR32XU

Just one day after reports from France that Bahrain Victorious' hotel and team bus were raided by police, Matej Mohoric tried to silence the critics with his second stage of the Tour de France.

He had a message for the doubters too..."I was feeling like a criminal, with all the police that came to our hotel. From one point of view it's a good thing, it means there is still control over the peloton, and they are checking all the teams. Of course they didn't find anything, because we have nothing to hide. But from another point of view, I'm disappointed in the system because it's not a nice thing when police walk into your room and search all your belongings.

Thomas De Gendt believes this is probably his final Tour de France and says he is looking forward to taking a break. The Belgian breakaway expert has struggled to make a mark at this year's race and explained that his best power numbers are only enough to get him dropped.

De Gendt told Sporza he'll be looking to do something different in 2022: "I don't have much to look for here, someone else can do it for me next year. The last ascent in this Tour and perhaps my last mountain ever in the Tour. There is a very good chance that this was my last Tour. But Luz Ardiden is a nice climb to finish with.

"Next year someone else can try it in my place in the Tour. I haven't been able to show anything this year and not last year either. I have very little to do here for myself, only as a servant. Then I can cope better."

The Lotto-Soudal rider said he didn't take enough rest during lockdown and has paid the price for riding four Grand Tours since last August. After the Tour of Norway in late August, De Gendt doesn't see himself racing regularly again until next spring.

"It may not be bad to get off the bike for a few months and only start again in, for example, Paris-Nice. Most likely I will only ride the Tour of Norway this year and a few Belgian one-day races, if they are short of someone," he continued.

The veteran's Lotto-Soudal team-mate Brent Van Moer, who has been dubbed De Gendt's protégé due to his breakaway expertise, is once again chasing a stage win and is in the front group of 18 riders who will compete for the day. They have 36km to go...

16 July 2021, 13:42
Here's what has changed for ad-free users...Plus some temporary fixes if you're having problems with the site 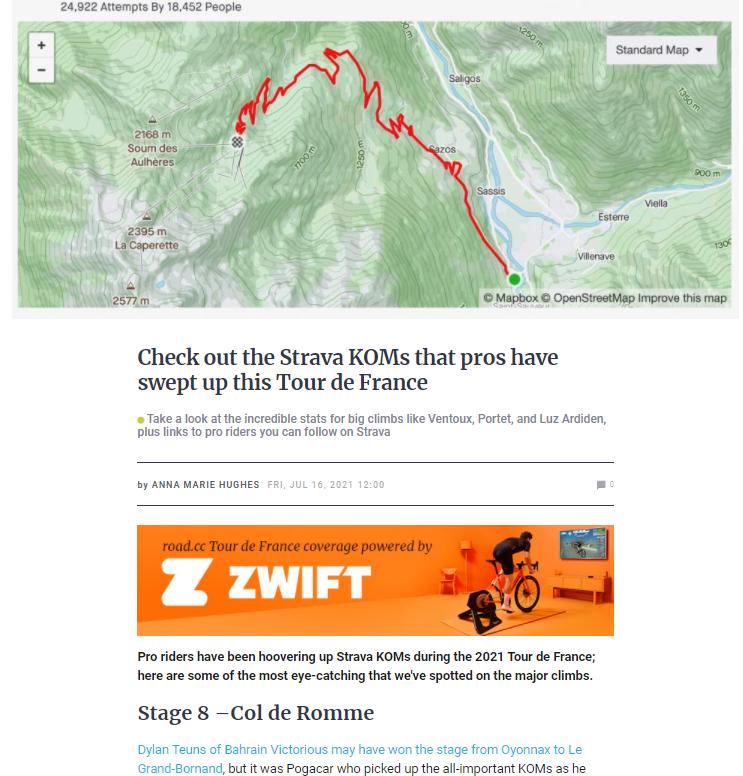 There have been some changes here at road.cc this week...We've got a new layout for ad-free users, which is good...Unfortunately, we've also had a few problems with the site - especially for logged in users.

We're working hard to get things sorted as soon as possible, but in the meantime we've got a full page here with some temporary fixes...

John Crozier was given a community order after admitting causing the death of Robert Eaves
33
16 July 2021, 13:26
When you've got too many jerseys

I for one would love to see the garish nightmare of the yellow jersey riding a polka dot bike. I've also just realised that the final podium picture will be Pog (barring disaster) with his yellow, white and polka dots next to one other (let's say green jersey wearer to avoid tempting fate)... 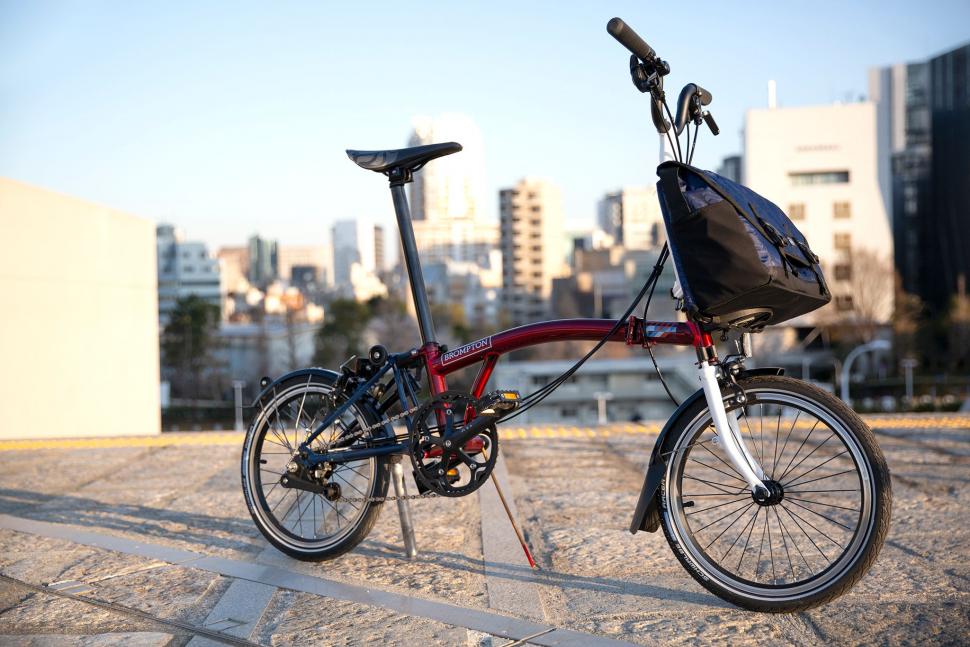 Since the 2012 Olympics in London, Brompton has been providing GB athletes with their folding bike transport for getting around the various training centres and Olympic villages. Now, with the help of Brooks England, Team GB bikes and saddles are available to the public for purchase.

The Brooks Team GB C17 All Weather Saddle is available online for £140 and both bike and saddle are in store at the Brompton Junction shop in London.

Today's stage 19 route is one of those Grand Tour stages that should be a sprint, but at this point in the race with everybody physically and mentally exhausted - the breakaway has a good chance. Six riders went up the road early on - Matej Mohoric and Simon Clarke amongst them.

Now, a 14-man second group has blown up any hopes of a quiet roll to Libourne...Mads Pedersen, Jasper Stuyven, Davide Ballerini, Nils Politt and Mike Teunissen are just five of the names involved. Another move with Alejandro Valverde and Greg Van Avermaet has just been caught.

16 July 2021, 12:07
Get ready for one hot weekend out on the bike
Too Hot Inbetweeners GIF from Toohot GIFs

I only went out for a half-hour spin but have come back feeling like a boozy Brit who's fallen asleep on the beach in Lanzarote all afternoon. As much as anything this is to remind me not to get sunburnt tomorrow, but here are some of our best guides on hot weather riding...

Cycling sun protection: 5 easy ways to look after your skin

And if you feel the weather's finally worth picking out a fresh, new jersey — here are some of the best summer jerseys

Right, time for a cold shower and some water... 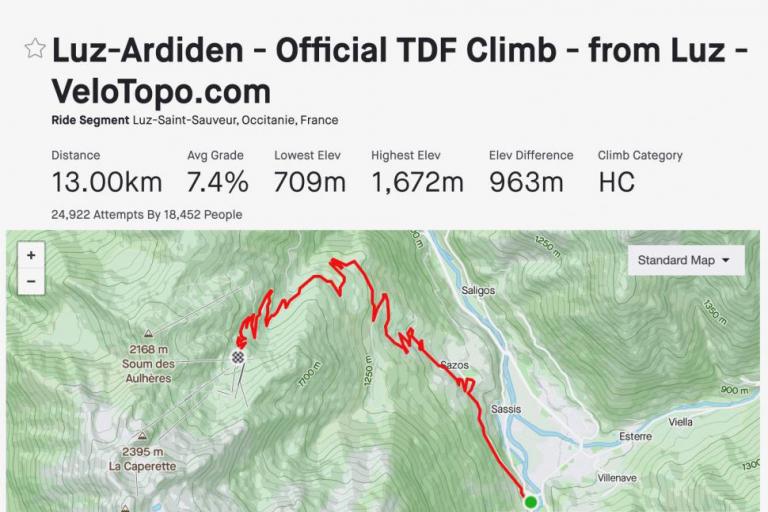 Take a look at the incredible stats for big climbs like Ventoux, Portet, and Luz Ardiden, plus links to pro riders you can follow on Strava
0
16 July 2021, 10:48
World's longest solar bike path opens in the Netherlands 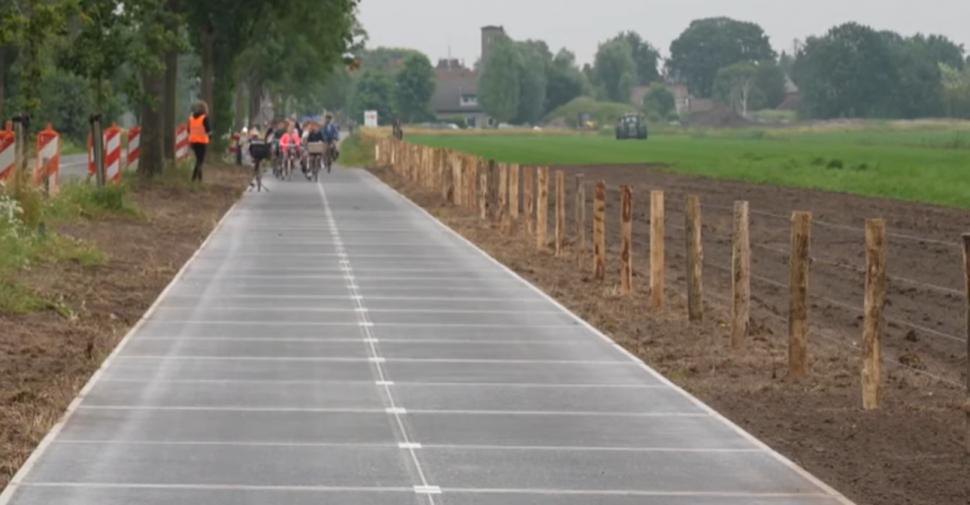 The central Dutch village of Maartensdijk is now home to the world's longest solar bicycle path. At 330m long it is made from blocks of concrete topped with a thin transparent layer that allows sunlight to strike solar cells housed in the blocks. The pilot project hopes to see if such dual-use roads can be used to create solar energy while also serving active travel.

"It's very important. We want to be climate-neutral in 2040, and then you have to dare to use innovation, and this is very innovative," Arne Scaddelee told Design and Development. "We have a very full province with not much room, and for that reason you have to try dual use. So if you can use roads to generate energy, you have a double advantage."

Solar bike paths are already used elsewhere in the Netherlands, but officials from Utrecht say this is the longest one yet.

🤩 From one legend to another. Respect!

Eddy M made a big prediction at the start today: Tadej Pogačar will win five more yellow jerseys. It's hard to argue with that...

The Met police driving like a madman to stop a cyclist for “speeding”(24mph) in Richmond Park…. pic.twitter.com/Kx03vJ2nn2

This police officer was keen to have a word about speeding with a cyclist in Richmond Park this morning, he even got the full blue light treatment...The speed limit in the park is 20mph (32km/h), something which is regularly broken by motorists. This rider was apparently riding at 24mph (38km/h) when he was stopped for a word...

"It's your safety," the officer can be heard explaining, before waving at the cyclist who stops to film. When asked if he told the rider to slow down, the officer walks off, says something inaudible, followed by, "but, yes".

The officer then drives off, ignoring the questions about stopping speeding motorists.

While speed limits on public roads only apply to those driving motor vehicles, the Royal Parks are able to apply the 20mph limit to all users, including those on bikes. Back in 2013, questions were asked after police fined a young cyclist for speeding in the park.

The discussion around road safety has continued since then, with many riders calling for through traffic to be banned. A recent 'code of conduct' for cyclists using the park was widely criticised, with one campaign group co-ordinator saying it cannot address the "real hazard" of motor traffic.

The Department of Parks & Recreation shared these videos from shortly after today's incident and accused the police officer of an "epic double standard"...

there is oil everywhere- dying plants, dangerous and filthy for kids walking to the school just next to this. Grim. pic.twitter.com/yblScrV3NS

This was the scene at an LTN in Tulse Hill, Lambeth this morning after vandals doused the planters with oil. It's the most recent incident of LTN vandalism in the area. Last month, vandals painted over 'no car' signs with white paint.

This is appalling behaviour. Who would do this? https://t.co/mq4AeHEJP6

On a more positive note...

On the flip side these planters in Maidstone Hill Greenwich have been lovingly looked after by local residents... pic.twitter.com/511uoYRcWO

The times are in...Pog, plus Richard Carapaz and Jonas Vingegaard for that matter, set the fastest times up Luz Ardiden since Lance Armstrong's infamous 2003 stage-winning attack. Yesterday's stage was considerably easier than the other most recent times on the list. It was 30km shorter and had less climbing than the Armstrong time and was 80km shorter than the Schleck time of 2011, which may account for the speedy ascending.

16 July 2021, 07:53
Jeremy Vine recruits another impatient driver to the Clown of the Day circus

Yesterday's Clown of the Day was, I think, showing off to his embarrassed passenger in the back seat. If you have a problem with my road positioning I'd be delighted to hear from you. #LondonCycling pic.twitter.com/cx8cre0n0b

This driver can do it all...encroach into a cycle lane, hoot a cyclist riding sensibly and safely, ignore potential hazards, get in an argument, lose the argument, resort to 'mind your business', speed off...and get stuck at the next set of lights. Jeremy suspected the driver's passenger was getting a bit embarrassed by the showing off...

You do have to wonder what the driver was hoping for? To get Jeremy out the way so he could race up to the red light for maximum waiting time? The presenter has recruited a few clowns to his circus recently, including one person driving down Kensington High Street on the phone...without hands on the wheel.

However, Jeremy will do well to outshine our favourite clown...There's never a bad day to rewatch 'Clown takes a pratfall'...Glorious.