It's Friday and Dan Alexander is here for the final live blog of the week... 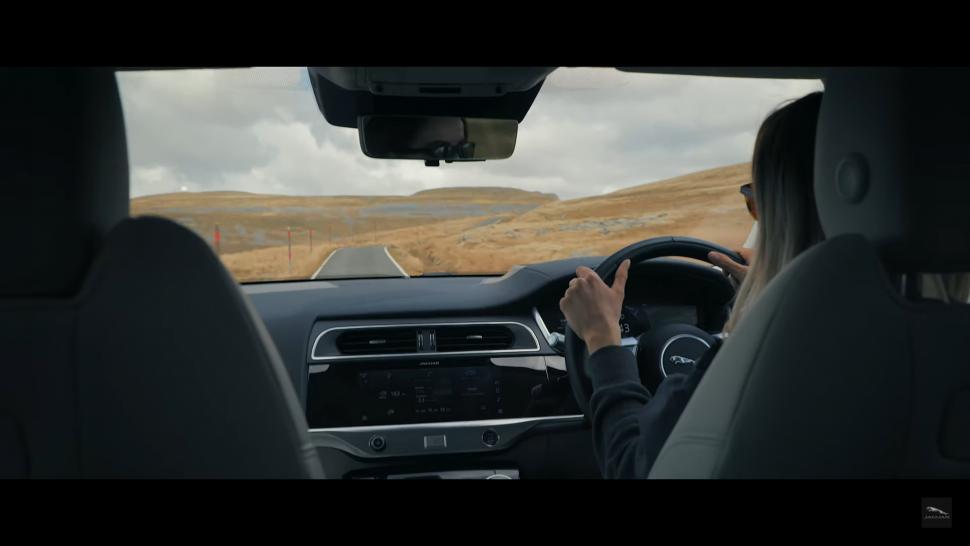 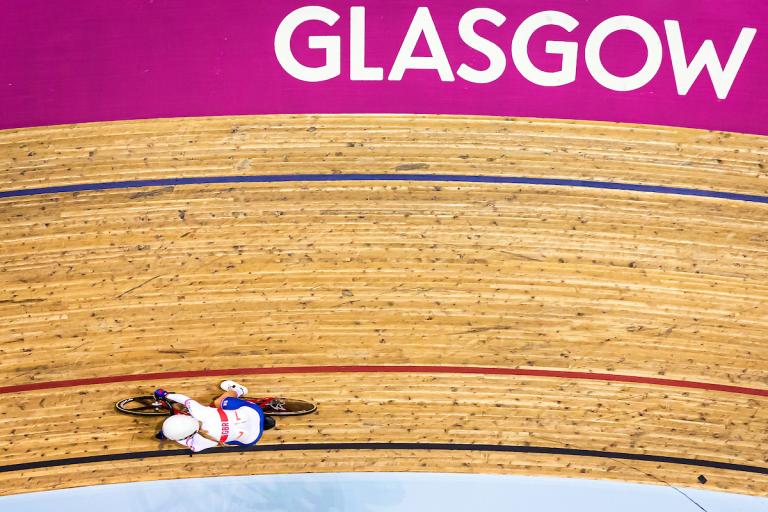 Governing body has taken event away from Turkmenistan – and yesterday dropped a strong hint they may be headed to Scotland
0
04 June 2021, 16:19
Elinor Barker everests Great Dun Fell...in a Jaguar electric car...we're not sure why either

This is a weird one...Elinor Barker Everesting Great Dun Fell would normally be right up our street. A GB Olympic champion on the track completing an epic cycling challenge on the UK's highest surfaced road? Class. Oh, she's doing it in a Jaguar electric car? Right. Why?

Promoting the manufacturer's I-PACE electric car, the 2016 Olympic team pursuit gold medallist climbs the 848m elevation road 16 times to show off the model's regenerative braking technology to complete the challenge on a single charge...I am glad that's been cleared it up...

Barker explained, possibly with some input from the brand, that: "Even as a professional rider, it’s a daunting feat of endurance, so I was happy to do it behind the wheel of the all-electric Jaguar I-PACE. When I found out that Jaguar Racing drivers typically need to regenerate 30 per cent of their I-TYPE's battery capacity in a Formula E race, as a competitor I naturally wanted to beat that figure! I’m delighted to have smashed that target – all while enjoying the comfort, silent power delivery and single-pedal driving of the I-PACE."

Earlier this week, Barker encouraged drivers to be patient after she was knocked off her bike by a hit-and-run motorist while training in Manchester.

After last Friday's silly steep climb featuring Chris Froome, this Friday it is Phil Gaimon taking on the leg-shredding gradients. The former pro and former Everesting world record holder goes for the KOM up an impossibly steep road to nowhere that I think we'd all just be glad to get up it...

04 June 2021, 14:20
Why we can't use cycle lanes: road.cc reader submits these photos of a Euston lane blocked by scaffolding firm's vehicles 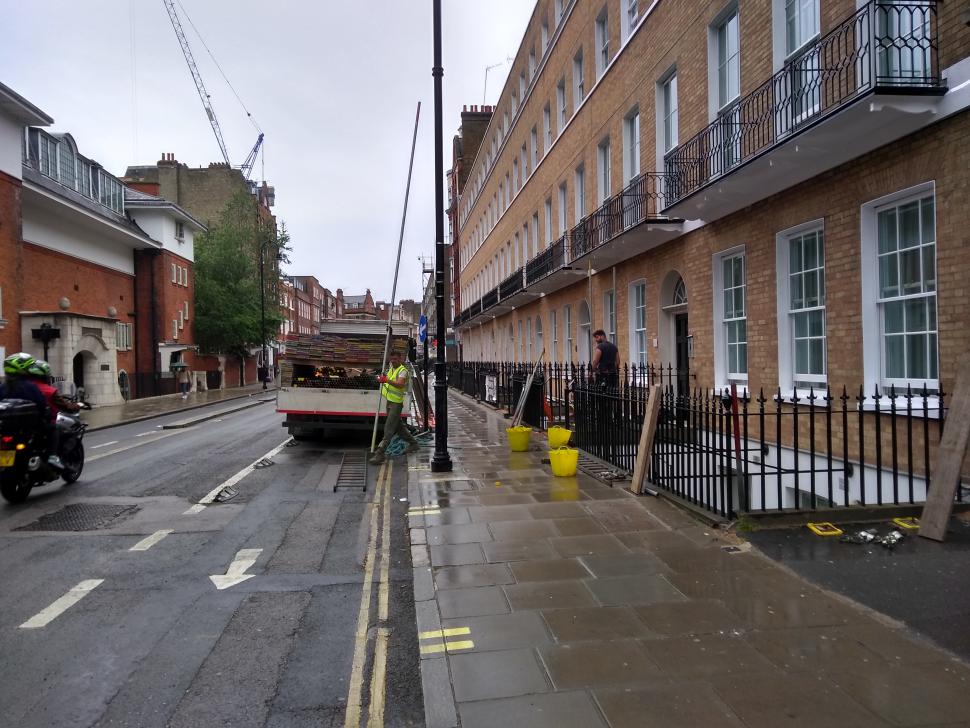 These photos were sent in by road.cc reader Max...anyone got any sympathy for the scaffolders in this instance? Could we soon see cargo bike scaffolding? Now that would be something... 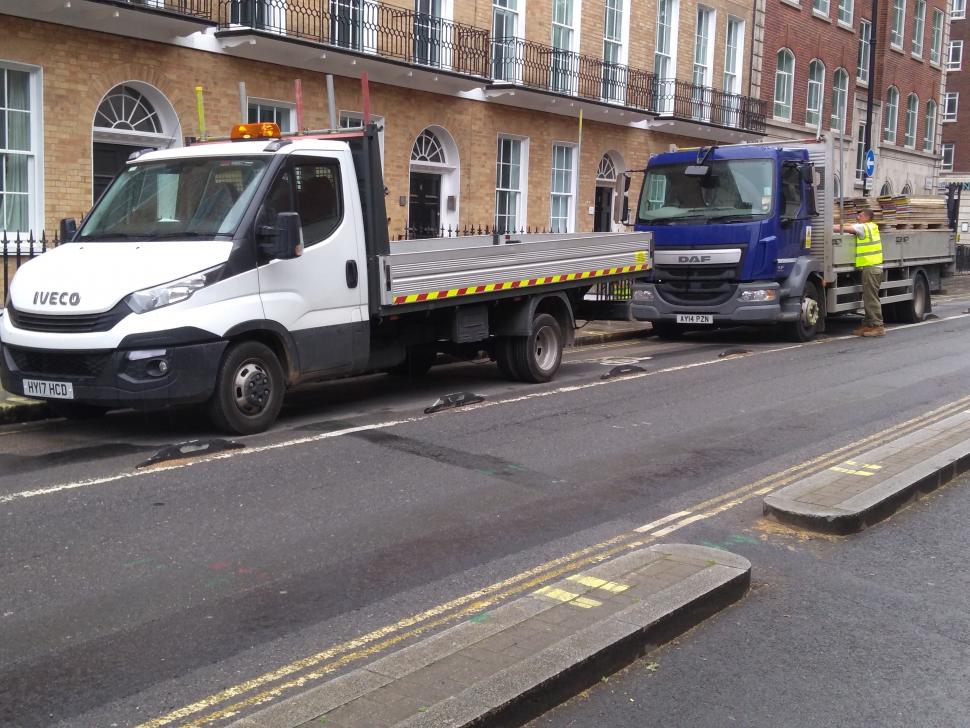 He absolutely smashed my time going 2 hours and 14 minutes quicker, so I can only respect and applaud such a strong performance.

Robbie Mitchell has set an incredible new record for the fastest ever ride around the famous NC500 route in the Scottish Highlands. Raising money for the Edinburgh Sutherland Association, Robbie completed the 516-mile route in 29 hours, five minutes and 42 seconds smashing Josh Quigley's previous record of 31 hours, 19 minutes and eight seconds by more than two hours.

Quigley set that time last September having recovered from life-threatening injuries sustained when he was hit by a car while riding around the world. Quigley took the time to congratulate his successor...but I wonder if he will be tempted to have another crack?

🏁 Sprint between the favourites and victory for 🇪🇸@alejanvalverde. 💪
⏪ Relive the last kilometre of stage 6. pic.twitter.com/G2FLygftjk

At 41, Alejandro Valverde has the 129th win of his career and first at a WorldTour race since the 2019 Vuelta a España. Valverde tracked the early sprint of Tao Geoghegan Hart, toying with the Brit, before powering past in the final metres to take an impressive win. Bora-Hansgrohe's Patrick Konrad was third.

Alexey Lutsenko finished in the select front group and will take the yellow jersey from Lukas Pöstlberger ahead of the penultimate stage tomorrow. Stage seven will take the riders above 2,000m to the summit finish at La Plagne before another relentless Alpine mountain stage concludes the week on Sunday. 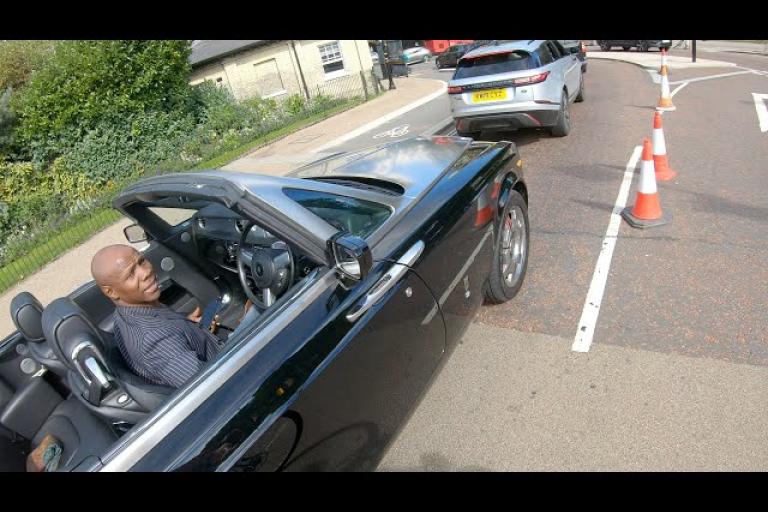 A post shared by Parrots Of Primrose 🇬🇧 (@parrotsofprimrose)

Parrots must be the new must-have pet...I saw a man walking a pair to Sainsbury's last night...no, really. I've got no idea if they let him in...

The late Michele Scarponi also famously used to be joined on training rides by a parrot called Frankie who would fly after the cyclist as he rode through Filottrano.

04 June 2021, 12:44
UCI Track World Championships to be moved from Turkmenistan to Glasgow 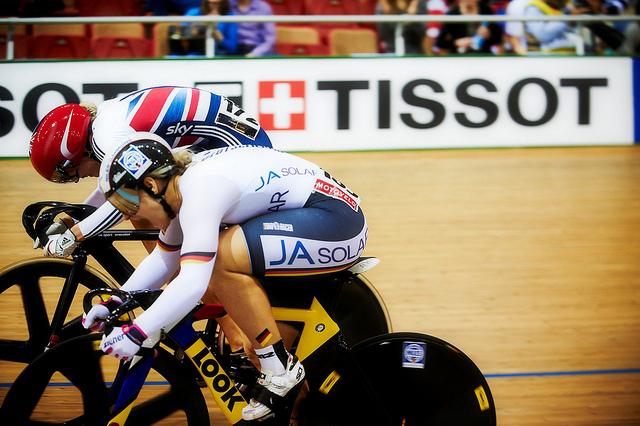 The event was originally scheduled to take place in Turkmenistan in October but was cancelled at the request of the organisers due to health constraints and Covid-19 restrictions. One man likely to be displeased at the news is President Gurbanguly Berdymukhamedov, the dictator who was recently pictured going for a spin in front of crowds of thousands of adoring citizens...

The UCI had been criticised for giving the event to a country with an authoritarian rule and woeful human rights record. It is the second major track event to be relocated following concerns about the host country. Last week, Belarus was stripped of hosting next month's European Track Championships following the Ryanair flight incident. 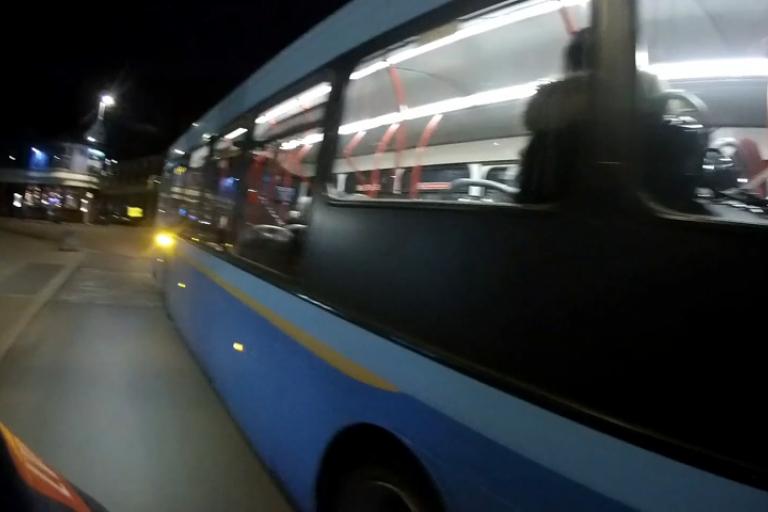 Near Miss of the Day 590: Bus driver left-hooks cyclist, forcing him onto pavement 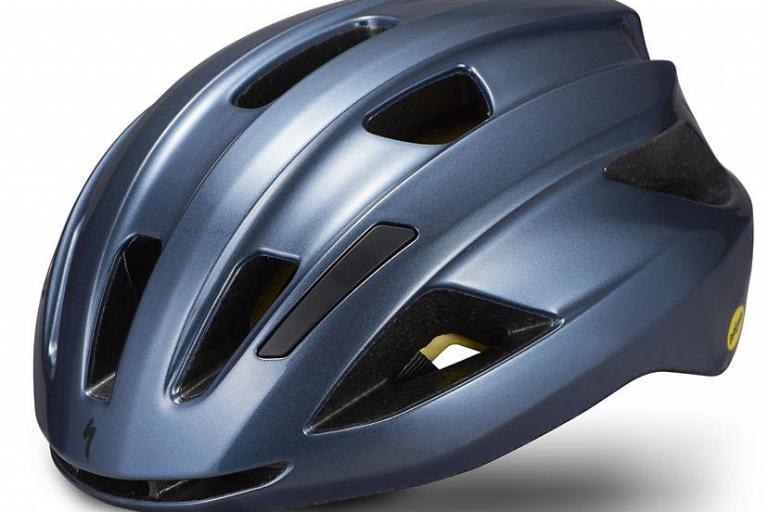 All of the recommended helmets feature technology designed for protection against rotational forces, one costing just £45
66
04 June 2021, 10:18
"Hi, please don't be a dick when passing cyclists..."

This is going on a bloke’s windscreen in the village tonight. pic.twitter.com/v8k3uMFBBA

This reminded us of those homemade parking tickets one cyclist, fed-up with drivers parking where they please, handed out in Glasgow before Christmas. The motorist's charming reaction? "I own my own law firm, now f*** off." I guess you can't please everybody... 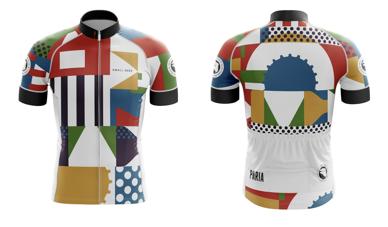 Small Beer Brew Co. has released this funky cycling jersey...it's been made using 100 per cent sustainable recycled fibres and 100 per cent of the profits will go to mental health charity Mind, so it is for a good cause too. Paria has provided the cycling kit expertise and if you send in an old jersey to be upcycled then you'll get a handy discount on this bright, new one...

Priced at £75, the low percentage beer specialists think these are your perfect summer colours...

04 June 2021, 09:11
"Cars are the menace—ban them": Reaction and solutions aplenty to yet more beauty spot traffic jam footage

Imagine if we made cycling THE feature of Richmond Park.
Implement a free bike borrowing scheme like in De Hoge Veluwe park in the Netherlands where there are 1,800 free bikes for people to use while visiting the park. https://t.co/OCdQr0BG4j pic.twitter.com/kgzjAOv5hS

We asked, and you delivered...the footage of a child cycling in Richmond Park while being passed by a steady stream of drivers, coupled with the bank holiday queues in the Lake District got us thinking. What can be done to encourage people to leave their cars at home when visiting beauty spots?

Just going to point out Snowden has a massive park and ride car park…. It’s laziness and entitlement.

Over on Facebook, Felix Rayner made the case for a more hard-line approach: "Cars are the menace...Not bikes, not people, not wildlife. Ban them. Big external car parks with buses. Think of how quiet and peaceful the park will be."

Moved house yesterday with @pedalmeapp and they were just the best, if you need something moving in London hit them uuup. Special shout-out to Chris for being an absolute legend. 🙌🙌🙌 pic.twitter.com/InZBcrMjLk

Fair play to Chris from Pedal Me for putting in a proper shift as a cargo bike removal man...I hope someone bought that man a beer...

04 June 2021, 07:47
MotoGP rider forced out of home grand prix after crashing...bicycle while riding the track

Much like Jay Cartwright in The Inbetweeners, MotoGP rider Alex Rins found out the hard way that skill on one type of bike doesn't necessarily carry over to another. Luckily, Rins did not crash his mate's 18th birthday present into the garage it was bought from...but the Suzuki rider will miss this weekend's Catalan Grand Prix in Barcelona after crashing his bicycle as he rode the track, breaking his right arm.

According to a statement released by his team, Rins was taken to Dexeus Hospital and will undergo surgery later today to stabilise the break...

The Spaniard fell during a training lap and as a result he suffered damage to his right arm, with a large contused area and a lot of pain.

He was quickly taken to Barcelona’s Universitari Dexeus Hospital for further examinations and the medical checks revealed a fracture in the radius bone.

The fracture was immobilised and tomorrow morning Alex will undergo surgery to fix it.

Rins told his fans about the news on Instagram: "Shit happens...but you know what they say: When you are going through hell...keep going! Better times will come."

Just last month, triple Superbike world champion Troy Bayliss fractured a vertebrae and suffered spinal damage in a cycling crash with another rider near his Gold Coast home. Bayliss had no recollection of the incident when he was taken to hospital, however reports suggest he collided with another bike rider who moved out from between two parked cars.