Subscribe
Back to news
news
Riding
Community
Art and design 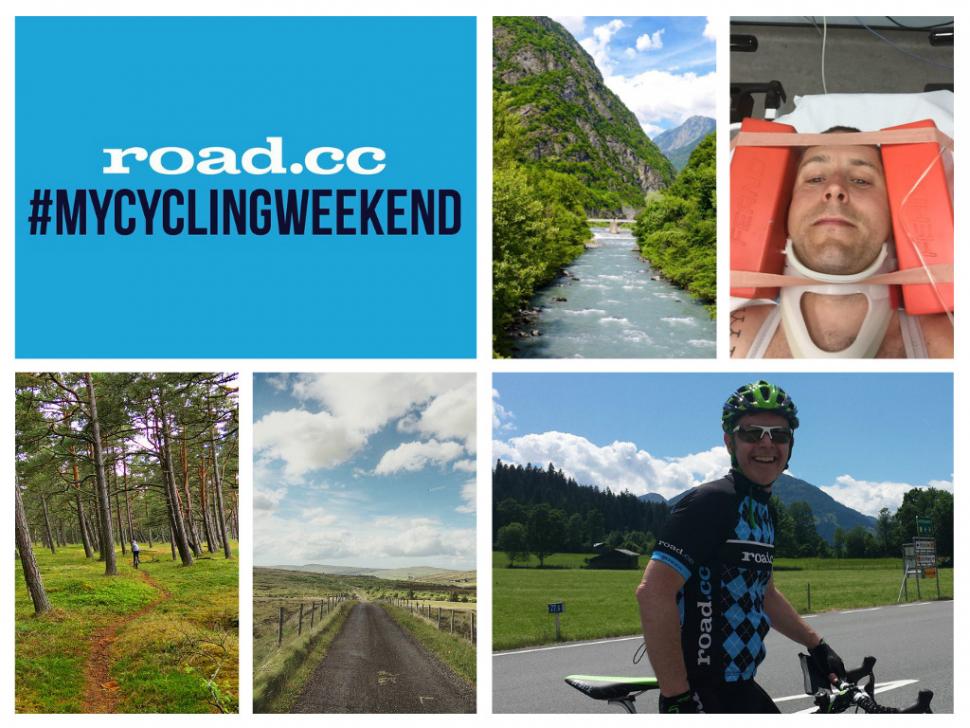 You guys went big this #mycyclingweekend, and so did we! Check out the stunning scenery, mountains, and a new Cannondale
by Elliot Johnston

This #mycyclingweekend had to be a big one if we were going to compete with that rabble running around Somerset fields listening to Kanye West and Paul Weller. Fortunately, you lot made it monumental.

You sent us some of the most beautiful snapshots of your cycling life that we’ve ever received through #mycyclingweekend - here are five just to whet your appetite:

A photo posted by Victory Chimp (@victorychimps) on

A photo posted by holly morris (@hollymoz) on

A photo posted by Petersons (@ptsns) on

You weren't the only ones cycling through mountainous beauty this weekend. Our editor "Ton" Farrelly had a great time with the new Cannondale SuperSix Evo - which he talks about in great detail here - despite a somewhat impersonal typo from the American bike manufacturers.

Elsewhere, you guys were enjoying events, group rides, family days out, and all sorts of other cycling-related bits and bobs.

You'll remember in our pre-#mycyclingweekend piece we gave you a couple of ideas of alternative cycling-themed days out to take your minds off of not being at Glastonbury.

It appears at least one of you heeded our advice. Depending on your tastes you'll think it either fo that we're not about to pepper your retinas with images from Bristol's Naked Bike Ride, rather we've got Marc Walker's shots from his day out at the British Cycling National Road Championships in Lincoln. Peter Kennaugh and Lizzie Armitstead walked away with the men's and women's titles, if you're interested.

Over in the Netherlands hundreds of cyclists, including Instagram user Mike Fortgens, took part in Toerversie Utrecht. Celebrating the imminent Grand Depart from the Dutch province Utrecht, the 150km sportive took a scenic ride around the city and the surrounding countryside; as you can see below:

Cycling is so much more than a sport for the hardy, it's a lifestyle. It's a family activity; an opportunity for father-son bonding. Twitter user ShoestringCycle and his son did just that this weekend, and it looks like they had a great time.

#mycyclingweekend riding to loe bar in #Cornwall with my son pic.twitter.com/HqYRcGKjIH

Some of you out there didn't have quite such a good weekend in the saddle. Cycling is an inherrently safe activity, but as well are all aware, when you mix cyclists and larger, faster, and heavier vehicles controlled by fallible human beings, collisions are inevitable - and usually there's only one loser in an impact between car and cyclist.

Karl Smith was unlucky to be on the bad end of a 25mph collision with a car. A broken sternum and a broken vertebra later, here he is, recovering.

We hope you have a speedy recovery Karl.

There were plenty of other road.cc team memebers out and about on the roads this #mycyclingweekend. Two of our bike testers, Caven O'Hara and Stu Kerton were wheeling about.

Caven found himself up an Alp, and Stu was out relishing a ride around the Derbyshire lanes on a Mason Definition, a bike which he treasures after buying a frame - which he built and blogged about - after he reviewed one, here.

#mycyclingweekend has been spent in the French Alps. This Is the top of the Col de la Colmbiere 18km long #stunning pic.twitter.com/395NaNfZS6

Riding the Derbyshire lanes on the Definition #mycyclingweekend @road.cc @mason_cycles

A photo posted by @stuart_kerton on

Inexcusably, I didn't make it out on my bike this weekend. I chickened out of the heat after having a less-than pleasant experience overexerting myself in close-to 40°C. I'll work on my heat management, and get back to you guys.

In the meantime, keep your eyes peeled for some #mycyclingweekend embelishing features popping up on the site over the next week. Both our DealCatcher and RideCatcher features have the potential to make your weekends significantly more cycling-centric.

Before then carry on tweeting, Instagramming and Facebooking your #mycyclingweekend photos to us by including the hashtag in a post on your social-media-platform-of-choice.