Ridley Bikes, now distributed in the UK by Sportline (who also look after Genesis Bikes, Saracen and Ridgeback) showed their latest range of bikes last week at a trade show in Milton Keynes, including the the brand new X-Night Disc cyclo-cross bike, an interesting CX Allroad with mudguards and fast tyres, and a very very special limited edition Helium SL with Campagnolo’s 80th anniversary groupset. We think this new X-Bow 20 Disc Allroad is the first time Ridley have offered a bike with mudguards. What they’ve done is basically taken their regular X-Bow cyclo-cross racer and assembled it with colour matched mudguards, some snazzy coordinated bar tape and saddle, and fast rolling slightly treaded tyres. Less cyclo-cross and more road, so ideal for winter training, cycling to work or just riding for fun.  Looks spot on for British cycling. We’re always banging on about how great cyclo-cross bikes are for British riding what with their rugged capability and versatility making them ideal for all sorts of riding, from commuting to training and off-roading. This bike is a good demonstration of that versatility. And it costs £999 which seems fairly reasonable, with a Shimano Sora groupset and 4ZA finishing kit. They’ve fitted Continental Cyclocross Speed tyres, but you could equally install a wide slick on there. Ridley revealed their new X-Night Disc cyclo-cross bike about 12 months ago, but this is the first time we’ve had a proper good close look at it. Well, apart from a very brief look at Eurobike last September. Ridley are highly respected in the cyclo-cross world and now that disc brakes, with the advent of proper hydraulic options from Shimano and SRAM (once they’ve been reissued after their recall) disc brakes are really starting to filter up into the top ranks of the sport. Ridley really needed a disc bike for when the pendulum swings towards disc brakes being the favoured choice for world cup racers, and here it is. They’ve used X-Night as the starting platform, itself a fairly new bike which Ridley only launched a short while ago, and it their lightest cyclo-cross carbon frame to date. This isn’t their first cyclo-cross bike with disc brakes though, they had the X-Ride Disc previously. This bike though is based on the X-Night, the super light cyclo-cross frameset they developed and launched last year. The frame is constructed from high-modulus carbon fibre with a press-fit 30 bottom bracket, a tapered head tube and all hoses and cables are internally routed. The routing through the fork and chainstay, and how the entry and exit ports are dealt with, is very tidy. Notice also that there is no external battery on this bike, they’re using Shimano’s new internal battery. This model is built with 4ZA (Ridley’s inhouse componentry label) Cirrus Pro CX Disc Carbon Tubular wheelset, a brand new wheel they’ve developed specifically with disc brakes in mind. They have 24 spokes in both wheels and the rim is 25mm wide and weigh a claimed 1,504g. They’re hand built in Belgium. If disc brakes aren’t your thing, you can just buy the regular X-Night, and here is SRAM Red 22 canti version. We know a lot of people don’t like black stealth bikes, but this one looks pretty swift we reckon. It’s finished with Zipp 303 wheels and 4ZA carbon handlebars and an alloy stem. Braking systems aside, both frames share a lot in common, and in essence they are the same. Obviously the disc version is going to be a smidgen heavier with a revised carbon layup in the stays and fork to deal with the disc forces, but they’ve cleaned up the frame and removed the canti stubs, so that’ll help offset the weight of the post mounts for the disc calipers. Both frames have a 27.2mm seatpost, inline with modern thinking for road frames - the skinnier post is better at deflecting impacts from riding over rough roads. Other changes include increasing clearance between the rear wheel and the stays, with a new wishbone seatstay design, to prevent mud building up in this area. The layup of the carbon fibre in the bottom bracket and head tube junction has also been developed further to increase the stiffness in these areas. The Helium SL with Campagnolo’s 80th anniversary groupset. Don’t bother asking how much it is unless you have exceptionally deep pockets. Okay, if you really want to know, it costs €8,999. See, we warned you it wasn’t cheap. Oh, and just Just 80 bikes will be built. 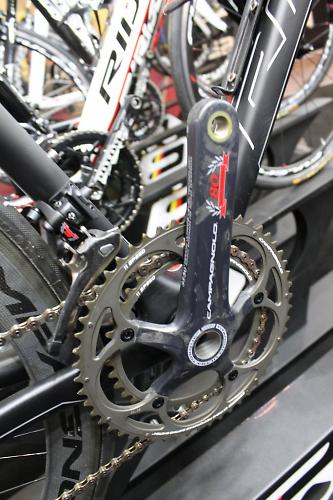 It’s the same Helium SL frameset that Ridley launched a few years ago, their lightest yet with a claimed sub-800g weight, but just built up with Campagnolo's 80th anniversary Super Record groupset. The Italian company celebrated its 80th birthday last year, and marked the occasion with a very special version of it’s high-end Super Record groupset.