We've had a go on the new Hydraulic Di2 system from Shimano. What's it like? Read on...
by dave atkinson

So we're here in Sicily trying out Shimano's hydraulic road disc brakes for the first time. They've been a long time coming, but they've landed. And first impressions are good.

Discs are only a part of the wider redevelopment of the Ultegra groupset, which has moved to 11-speed and is available with either mechanical or electronic Di2 shifting. We've covered the launch of this equipment in detail before on road.cc, so we won't go it in great detail now. Suffice to say that the mechanical incarnation of the the groupset borrows heavily from Dura Ace, and the electronic shifting is realised through derailleurs that are, to all intents and purposes, the same. Okay Dura Ace is a bit lighter, but in terms of form and function there's very little between them.

In contrast to SRAM's tall levers that accommodate the master hydraulic cylinder and the mechanical workings, Shimano's discs use Di2 levers that are, to all intents and purposes,  empty thanks to the switch to switches. That means that Shimano are able to run hydraulic discs from a lever that's the same size as the non-disc Ultegra unit. The brake levers pivot differently, leaving the shiny master cylinder static up top.

One thing that we've been hearing on a more or less constant basis is that the switch to discs is market driven, and not something that's particularly interesting the pro cyclists. That being the case it was certainly interesting to hear Andy Schleck, who's been present at the launch, talk about the limitations of braking on a current professional bike, with carbon rims and callipers. He for one seems to be in favour of a switch to discs.

From Andy's point of view the possible switch to discs isn't so much a boon in terms of overall braking power as consistency in poor conditions. "If you're descending in the wet then there's often water on the braking surface of the rim", he told us. "You need to brake in time to clear that water, you're often dragging the brakes into a corner with no guarantee of what's going to happen". Similarly on a hot alpine descent Andy tells us that the difference in braking feel and power is very different from the top to the bottom, as the brakes heat up the rim surface. 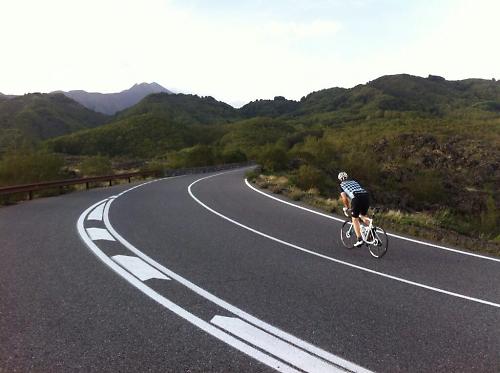 So is disc braking the beautiful future that puts all these issues to rest? Well, we've only had one go on the new Shimano hydraulics thus far: a 1h45 grind up Mt Etna where they weren't required at all, followed by a 16-minute descent back down where they most assuredly were. Here's what we found.

Form: the lever feels the same as a Di2 lever, and by extension a Dura Ace lever; all have the same basic shape. The pivot for the disc lever is different (the cylinder doesn't pivot, of course) but the the feel of the lever is very similar. The Di2 buttons Work flawlessly and the whole thing feels polished. The aesthetic criticisms levelled at SRAM's tall hydraulic levers aren't applicable here, though the taller profile of the Red disc lever does suit some riders.

Function: there's a lot of power available through the hydraulic setup. It's noticably more the you'd expect from a rim brake and consequently you adapt your braking to pull later in the run-up to a corner. It's not really a conscious decision: you just automatically adjust.

Modulation of the power is excellent and it was a very rare occasion that I locked up the back wheel into a hairpin; this even on a descent I don't know at all.

It's possible to fade the brakes by dragging them down steeper sections. It's a predictable fade, and only really achievable by single-wheel braking. Once you're using both brakes it ceases to be an issue, and it's not an issue at all if you're prepared to attack the straights and brake fairly late into the corners.

We had a fairly significant amount of noise from the brakes on our test bikes on the descent from Etna, more so as the system heated up. Since the pads and rotors were new it's fair to asssume that this is due to the components bedding in, but we'll see how they perform for tomorrow and Wednesday.

Overall the first impressions were very positve: easy modulated, and consistent, power in braking coupled with the simplicity of Di2 shifting.

This isn't meant to be a full review of the system, just a heads up on our first findings. We'll continue to report on how the discs work over the next couple of days, and we're also looking forward to receiving a set for longer-term testing. Stay tuned for that.