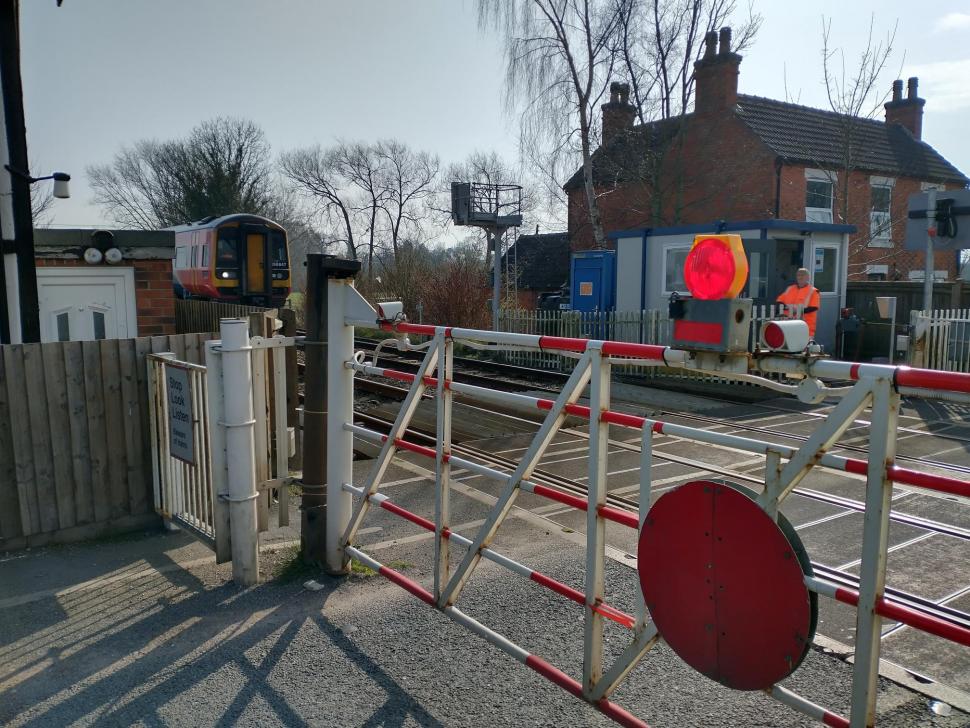 Police in Derbyshire are seeking a cyclist who repeatedly tried to force his way through a closed level crossing, even after Network Rail staff told him he could be arrested for attempting to jump the barrier.

A level crossing in Hilton, about ten miles outside Derby, was closed on Monday morning for three hours due to a technical issue.

Staff working at the crossing said that most road users politely heeded the closure, with one Network Rail worker explaining the reasons behind the problem to those who asked.

However, others weren’t so accepting of the delay to their morning commute, and vented their frustration towards staff.

One cyclist allegedly approached the closed pedestrian gate at the crossing to demand access across the tracks. When a member of Network Rail’s safety team informed him that he couldn’t cross, the cyclist apparently attempted to lift his bike over the barrier.

According to Mercia Police’s Safer Neighbourhood team (SNT), who responded to the incident, the cyclist was warned that he could be arrested if he continued to attempt to jump the crossing, prompting him to shout: “Arrested? I’m willing to take that chance.”

After the safety team member refused to let him through, the cyclist eventually conceded and rode away.

In a separate incident at the same crossing, a spokesperson for Mercia Police SNT said that another male cyclist directed a “vigorous hand gesture” towards one of their officers from the other side of the barrier, before “hurtling off” in the opposite direction.

An investigation is currently underway to identify the cyclist who attempted to jump the barrier and officers have asked anyone with information to contact Derbyshire Constabulary by calling 101 and quoting incident 189 of 21/03/22.

Mercia Police SNT also called on all motorists and cyclists to “adhere to road and rail closures. If you do not, you could endanger your life and the lives of others”.

British Transport Police regularly publishes videos showing people, including cyclists, misusing level crossings, an offence which, notwithstanding risk of serious injury or even death, can lead to prosecution.

In 2018 George Caraska was fined £130 after pleading guilty to one count of disobeying a safety notice or sign and one of obstructing an engine using the railway by an unlawful act, after he was filmed forcing his way with his bike through a level crossing in southwest London.

The footage was shared widely online, including by the broadcaster Jeremy Vine, with Caraska telling one bystander at North Sheen station, who urged him not to cross the railway line, “I don’t fucking care, mate.”

Speaking after Caraska was sentenced, Assistant Chief Constable Robin Smith of British Transport Police said: “This has to rank as one of the most stupid, arrogant and dangerous things I’ve seen in my entire police service.

“Fortunately, Caraska was caught on camera and widely shared on social media by members of the public who were as horrified by his actions as we were.”

In 2020 Network Rail was forced to warn cyclists and other people to use level crossings properly after a man on a bike was almost hit by a high-speed train near Canterbury.

Footage released by the rail network owner showed the train driver sounding the horn and applying the emergency brake when he saw the cyclist riding across the tracks, with the train coming to a halt beyond the crossing.