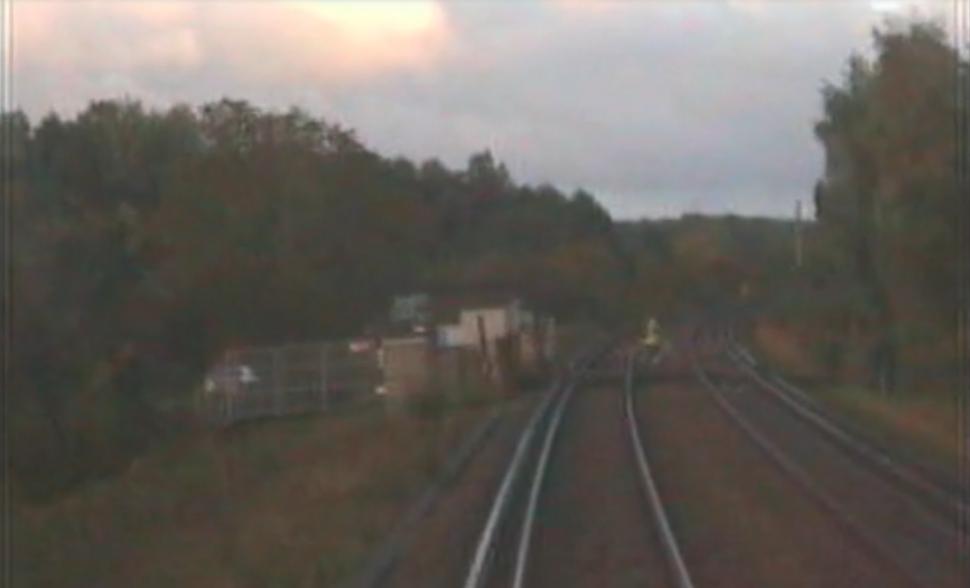 Cyclist on level crossing near Canterbury (via Network Rail).PNG

Network Rail says there has been a "small but concerning rise in such incidents in recent months"...
by Simon_MacMichael

Network Rail have warned cyclists and other people using level crossings to get across railway lines to use them properly after a bike rider was almost hit by a high speed train near Canterbury this morning.

The rail network owner and infrastructure manager has issued footage of the incident, which happened at the Dog Kennel foot crossing on Ashford Road in Chartham at around 7.50am, shot from the train’s cab.

The Southeastern service from Margate to St Pancras was travelling at around 80mph as it approached the crossing.

After the driver spotted the cyclist riding across, the driver sounded the train’s horn and applied the emergency brake, the train coming to a halt beyond the crossing.

Fiona Taylor, Network Rail's Route Director for Kent, said: "This shocking incident near Canterbury is part of a small but concerning rise in such incidents in recent months and the impact had the train hit this cyclist could have been devastating to all involved.

“We all want to enjoy the outdoors but I'd ask people to be vigilant when they are anywhere near the railway and always to Stop, Look and Listen before they cross."

Jim Maxwell, Head of Drivers for Southeastern, commented: “Our drivers don’t deserve the extra stress that these types of incidents cause.

“Reckless trespass incidents can have a profound effect on our drivers’ mental health, and are further compounded if the driver has been unfortunate enough to have been previously involved in a fatality, with the potential to cause flashbacks.

“It often means that the drivers have to take time off whilst they recover, and are supported through their ordeal.

“I fully support our colleagues at Network Rail and the British Transport Police in trying to identify and pursue the culprits.”

According to Network Rail, there were two similar incidents in Kent in August, both involving walkers near Sevenoaks. Across the country, there were 323 non-vehicle near misses last year and two fatalities.

In recent years, Network Rail has been adding safety features such as warning lights or train horn noises to increasing numbers of level crossings, but it says that many still need people to “Stop, Look and Listen” to ensure a train is not approaching.

In 2014, a coroner’s inquest heard that 42 year old Adrian Smith was killed at the Cattishall level crossing in Great Barton, Suffolk, when he was hit by a train travelling at 60mph.

> Cyclist killed by train on level crossing had headphones and was looking wrong way, inquest told

Coroner Dr Peter Green said: “The driver sounded the horn while approaching the crossing before noticing a white male was moving his bike across the crossing.

“The driver said he was not in a hurry, he was ambling across, he felt totally helpless because there was nothing he could do.”

British Transport Police regularly publishes videos showing people, including cyclists, misusing level crossings, which besides the risk of serious injury or even death can lead to prosecution.

In 2018, George Caraska was fined £130 after pleading guilty to one count of disobeying a safety notice or sign and one of obstructing an engine using the railway by an unlawful act after he was filmed forcing his way with his bike through a level crossing in south west London.

The footage was shared widely online, including by the broadcaster Jeremy Vine, with Caraska telling one bystander at North Sheen station who urged him not to try and cross the railway line, “I don’t fucking care, mate.”

Speaking after Caraska was sentenced, Assistant Chief Constable Robin Smith of British Transport Police said: “This has to rank as one of the most stupid, arrogant and dangerous things I’ve seen in my entire police service.

“Fortunately, Caraska was caught on camera and widely shared on social media by members of the public who were as horrified by his actions as we were.”