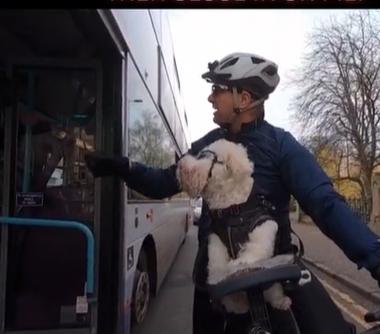 MotorbikeMilly as she's known on social media has gained internet fame with videos like this one of the four-year-old Bichon Frise strapped to her owner's bike. In the latest adventure, Milly and her owner Paul are on a pedal cycle rather than a motorbike, and stand up to the driver of a bus when they're repeatedly close passed. Presumably the bleeped out swearing is from Paul, and not the pet pup... 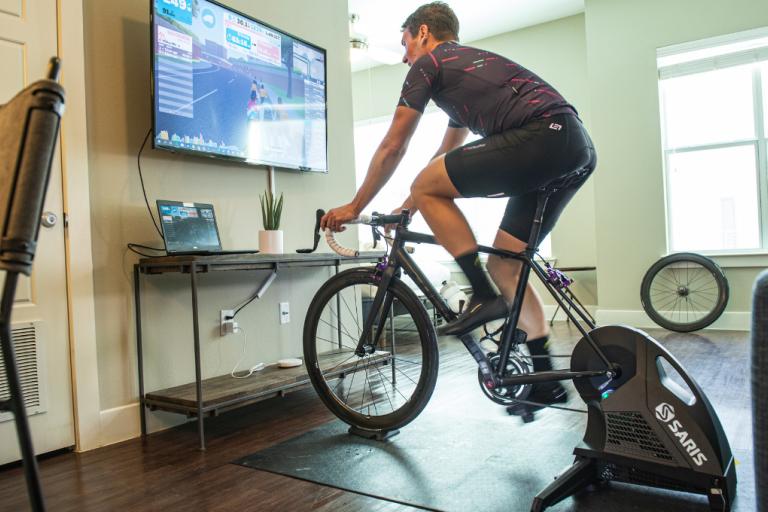 Join the Saris x Strava Winter Miles Challenge for the chance to win a mega training bundle worth £1,800!

SPONSORED
Starting on Monday, simply ride for four hours in the one week interactive challenge to be entered into a stonking prize draw
0
13 November 2020, 15:36
Belfast Council consider introducing pollution-busting bikes 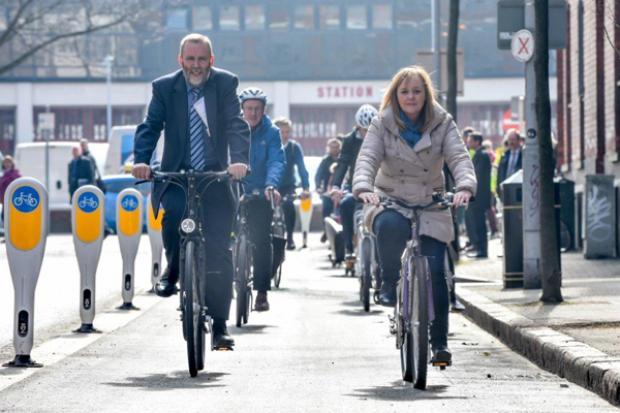 A new pollution-busting bicycle could soon be part of Belfast Council's fleet of city bikes. BelfastLive reported that the motion was forwarded at a committee this week to introduce the bikes, which purify air via washable filters housed in the wheel. The bike was designed by Kristen Tapping who is a student at London South Bank University.

Tapping claims the ROLLOE bike will be ready to use within the next two years. Air enters the wheel through a cyclindrical opening, is pushed through by centrafugal force and filtered before being released.

Dr Peter Gammons (@Gammons4London) is UKIP's candidate for London Mayor, taking our fight to the Khanage left behind by Labour.

Dr Peter Gammons (whose name is quite apt according to some on social media), has wasted no time in forming a revolutionary cycling plan for the capital. His ingenious masterstroke "to get London moving again" is to send cyclists underground...by converting a network of "over 2 million miles of unused tunnels, streets, and chambers beneath London".

It's just as well nobody has thought of an underground public transport system in London before now...Gammons' own website claims he is: "One of the world’s most famous and in-demand Inspirational and motivational speakers. It is historically documented that he has spoken to larger crowds that any other person in history, with crowds of up to 4 million people in a single rally."

Gammons also wants to reverse what he has called a "war on motorists", which he claims is being waged by the current London mayor Sadiq Khan - you can digest the full announcement here. 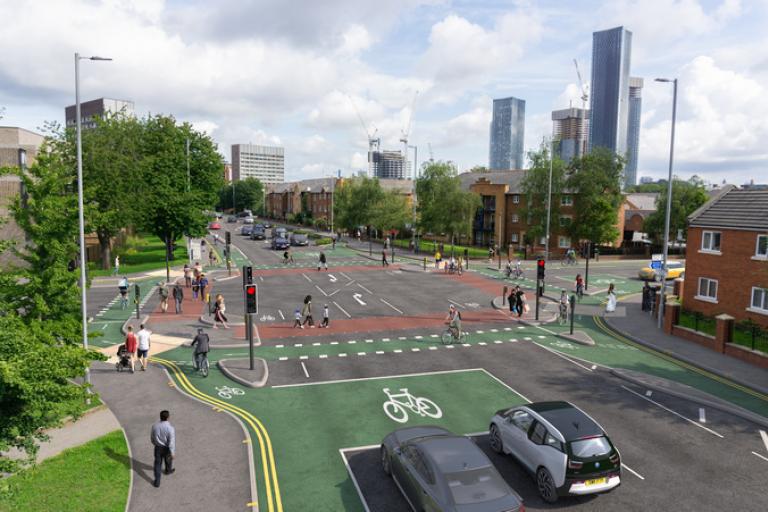 “If you asked people 10 years ago, ‘Is it okay if we put 30% more traffic down your road?’ there’d be incandescent rage – but that consultation never took place”
16
13 November 2020, 14:17
More medal success for Team GB at European Track Championships

A European night to remember for @BritishCycling.

Report and reaction from Plovdiv 👇 📸 @swpixtweets 📸

Team GB added wongold medals and one bronze on the second day of competition at the UEC European Track Championships in Bulgaria yesterday. The women's team pursuit squad of Katie Archibald, Neah Evans, Laura Kenny and Josie Knight took gold, beating the Italian team by three seconds. Elinor Barker joined the team on the podium having missed the final to compete in the elimination race - where she also won gold.

Speaking on the team pursuit performance, Laura Kenny said: "That’s the fastest time we’ve done since Rio, so that shows the form that we were in going into an Olympic year.

"It’s good to know we are still moving forward, Josie (Knight) is here for her first European competition and that shows the way British Cycling moves forward too. I personally think we’ve got a lot more to come, we’ve got people sat at home itching to get into this team and that can only help us move forward." “It’s just super special to have something to remember the race by”, the Giro d'Italia winner admits
2
13 November 2020, 12:00
Rapha Black Friday Challenge 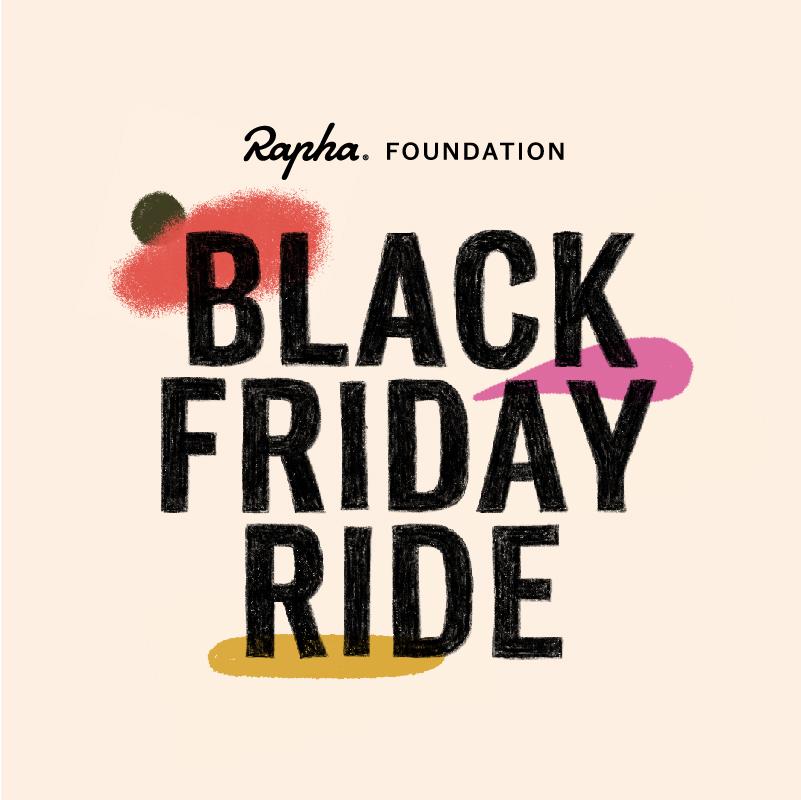 There's not going to be any Black Friday deals to be had at Rapha this year... instead they've set the challenge for cyclists worldwide to ride one million kilometres on November 27th to help raise money for World Bicycle Relief. If the target for the Strava challenge is reached, then Rapha will donate £120,000 to World Bicycle Relief, which which will be enough to distribute 1000 bikes for those who need them most. Ahead of his next crack at the Hour Record next month, Dowsett will also be hosting Zwift group workouts for Zwifters to train with him during the run-up to the attempt. The eight workouts have all been designed by Dowsett himself, and he will be leading one per week with the first starting at 7pm on 18th November.

He said: “I'll be massively appreciative of the support knowing that there will be others suffering alongside me, hopefully all working towards the glory of setting a new UCI Hour Record.

“In very rare circumstances do athletes share their training before an event, so I’m hoping many Zwifters will seize the chance to join me on my journey so they can feel a part of the attempt on December 12th."

Outside of Watopia, it's been announced Dowsett will continue riding for Israel Start-Up Nation until at least 2022 after signing a new two-year deal with the team. Dowsett earned the WorldTour newcomers their first Grand Tour stage win at the Giro d'Italia last month and will attempt to reclaim the Hour Record on December 12 at Manchester velodrome. Israel Start-Up Nation have strengthened their squad ahead of 2021 with the signing of Chris Froome as well as established pros Alessandro De Marchi and Patrick Bevin.

If you fancy joining in for the group workouts on Zwift, all the details are here.

British Cycling's squad of nine who will compete at the UCI eSports World Championship on Zwift next month includes Dame Sarah Storey, Ed Clancy and Elinor Barker. The trio have won 13 Olympic and Paralympic golds between them and are joined by Megan Barker, Dani Christmas, Jenny Holl, Max Stedman, Andy Tennant and Robert Scott.

The inaugural eSports World Championship will be held on Wednesday December 9 with riders racing on Zwift. Both the men and women's events will use the same 50km course, the Watopia Figure 8 Reverse with Hilly KOM Finish.

Stephen Park, Performance Director for the Great Britain Cycling Team said: “I’m really looking forward to the inaugural UCI Cycling Esports World Championships, and I’d like to commend the UCI and Zwift on this exciting collaboration.

“Amongst the talented Great Britain Cycling Team line-up, we have reigning Olympic and Paralympic champions, including Elinor Barker, Ed Clancy and Dame Sarah Storey, all vying to add another rainbow jersey to their collection." 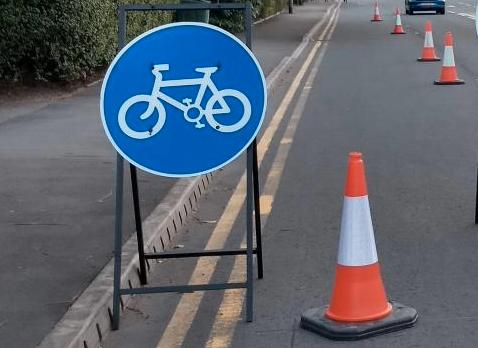 The government's announcement that there would be no new funding for the Active Travel Fund, only the release of already committed funds, should have gone down well with anti-cycling groups... Somehow the decision to release £175 million, which was already committed to the Active Travel Fund in May, has caused a storm for some motorists who can't understand why they get stuck in traffic (despite the queue of cars bumper-to-bumper).

Transport Secretary Grant Shapps also announced today that councils wishing to use the fund would have to comply with more comprehensive consultation periods. So you'd expect motorists to be quite pleased with the day's events....or not.

Mail Online reported the news as "another £175MILLION to fund new cycle lanes and road closures during pandemic despite congestion chaos clogging cities"...

Others decided the best way to deal with the news was to demand wearing a helmet and Hi-Vis compulsory when riding a bike...

Make it compulsory to wear a high visibility jacket when cycling and motor cycling. I believe this will reduce accidents in one stroke. It can be difficult to see these people, there is even one cyclist who lives near me that wears a camouflage jacket!

They already are. All cycle helmets sold in the UK must conform to BS EN 1708.

If this was the response to no new funding I wonder how they'd have taken the news if the government had invested more money into active travel... 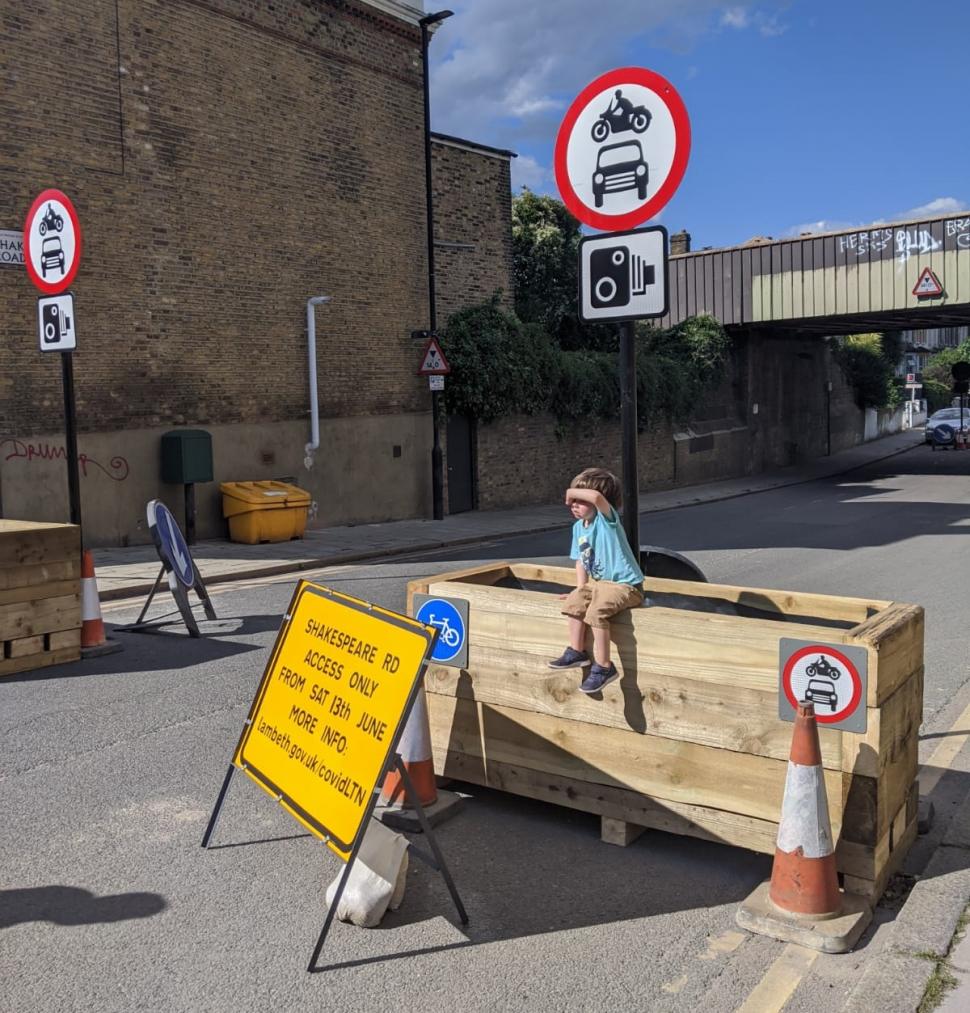 A Hackney Police sergeant has asked people to ignore "scaremongering" online about LTNs and stressed that they don't prevent emergency service vehicles from attending incidents. The inconvenience that LTNs cause for emergency service vehicles is one of the most common arguments wheeled out by anti-LTN groups, but sergeant James Higgins asked the public to: "Please don't believe any scaremongering online."

LTNs have been the subject of heated debate in the past months. Anti-LTN group OneWandsworth blamed a segregated bike lane on the A24 in Tooting for preventing an ambulance to attend to an injured motorcyclist, despite the road being blocked by cars.

In August, this LTN in Ealing was vandalised with oil poured on the road and planters vandalised.

🌿🚸 This week, we launched a new School Street and traffic filter outside Harrington Hill School.

⬇️ Watch @MPSSpringfield police sergeant James Higgins explain why he supports the School Street and how the filter doesn’t affect his ability to respond to emergencies ⬇️ pic.twitter.com/W5Hy29iK6s

The Department for Transport have dropped the word 'emergency' from the second-round of the 'Active Travel Fund'. Despite the hope that this may suggest a long-term commitment to cycling infrastructure beyond the pandemic, the second-round announcement did not include any new funding. Instead the 'Active Travel Fund' will release £175 million of the £250 million initially pledged back in May.

On the second-round of funding Transport Secretary Grant Shapps said: "It has been great to see so many people build cycling and walking into their daily travel habits. To support them, we know it’s vital to have the right infrastructure in place so everyone – cyclists, pedestrians and motorists – can use our roads.

“Whether you’re walking, cycling, driving or using public transport, people must have the space they need to get around safely.”