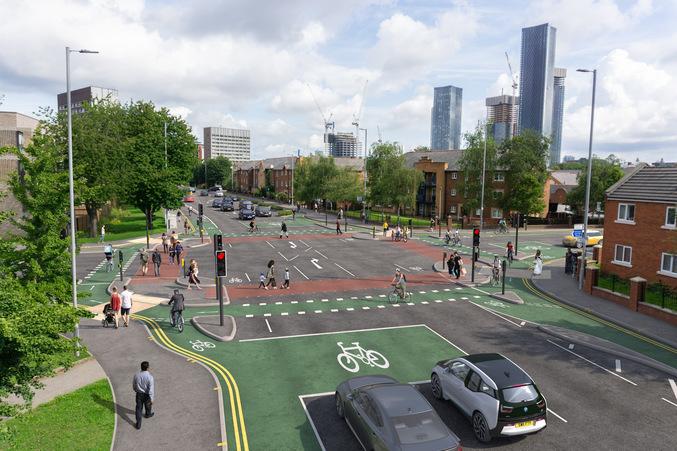 “If you asked people 10 years ago, ‘Is it okay if we put 30% more traffic down your road?’ there’d be incandescent rage – but that consultation never took place”
by Alex Bowden

The government yesterday released another £175m from the £250m Active Travel Fund, allocating it to local authorities in England to make streets safer for cyclists and pedestrians.

Transport Secretary Grant Shapps recently criticised the quality of some of the pop-up bike lanes created with the first tranche of funding and so new guidance emphasises the need for public consultation before constructing such schemes.

I’ve also set tough new conditions to ensure schemes are properly consulted on & evidence of this is shown BEFORE schemes are rolled out. PLUS monitoring reports are submitted after schemes open to clearly show how they have been modified based on local feedback 🔊

The new guidance says that councils must:

Boardman, who will shape how £16m is spent in the Greater Manchester area, welcomed the move.

Highlighting how unwelcome the current road traffic situation is, he said: “Nobody asked for the amount of traffic that we’ve got on our residential streets right now.

“If you asked people 10 years ago, ‘Is it okay if we put 30 per cent more traffic down your road?’ there’d be incandescent rage – but that consultation never took place.

“But that’s what happened. We now have 20 billion more miles driven past people’s homes than we did just 10 years ago.

“So people actually want the change. But those changes have to be done properly and they have to be in consultation – not done to people.

“So I absolutely welcome more consultation because we know that this is something people want.”

Local authorities will be required to engage closely with the Department for Transport (DfT) throughout the process – while Active Travel England – once it is set up – will further assess plans to ensure they are of sufficiently high quality.

Boardman said this was an equally important element.

“It’s the insistence on standards as well as consultation to make sure that what we get actually gives people in cars a genuine motivation to get out – so they can look out of the window and say, ‘Do you know what? I might try that.’”

Expanding on that, he added: “I think in its crudest terms, you have to be able to look out of the car window and see something that looks easy and safe – because if it doesn’t, then why would you get out of the car?”