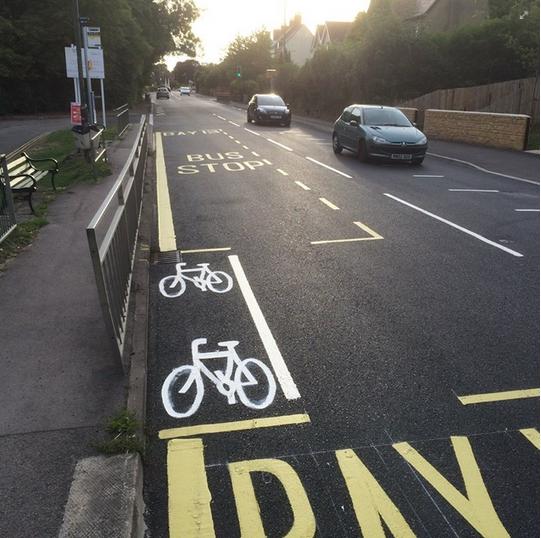 Is this the UK's shortest cycle lane?

Stroud's new cycle lane, painted between two school bus stops, might be Britain's shortest. Have you seen any smaller ones?...
by Laura Laker

Is this the UK's smallest bike lane?

An eight foot long cycle lane recently painted in Stroud, Gloucester, has been claimed to be the UK's shortest.

Daubed between two school bus stops this is, of course, the latest in a long tradition of short, and apparently random cycle lanes bedecking the UK roads thanks to quirks of UK legislation.

Stroud has finally got a resurfaced Cainscross Road and look, we've now also got Britain's shortest cycle route. It's...

Caminada feels it will do little to encourage people to cycle.

"Stroud has finally got a resurfaced Cainscross Road and look, we've now also got Britain's shortest cycle route. It's just what we need to tempt and encourage those Stroud High and Marling kids to start cycling..." he said in a post on Facebook.

The council says the tiny bike lane is part of a longer route, which continues notionally through the bus stop, but thanks to UK regulations the bus stop markings take priority over the bike lane markings.

Jason Humm, area highways manager for Gloucestershire County Council, told Stroud Life: "We appreciate the markings could be mistaken for a smaller cycle lane but they are in fact part of a longer, advisory cycle lane.

"We are keen to promote cycling around the county and this lane is part of that commitment.

"When we put cycle lanes in we consult with cycling groups on what they require. Feedback we've had shows that some form of road marking, highlighting the presence of cyclists, is better than none at all.

"Legislation prevents us from painting over bus lanes, and so the advisory cycle lane conditions continue underneath. That said, we'll be working with our contractors to bear this in mind when painting further cycle lanes in the county."

The Cainscross lane has proved such a winner you can now buy a photo of it, complete with two cyclists who have managed to simultaneously ride on it, courtesy of Caminada.

The Independent believes this minuscule bike lane takes the wooden spoon for Britain's shortest cycle lane from the previous title-holder in Plympton, Plymouth.

We're pretty sure there are shorter ones, however. Do share your suggestions in the comments section below (with measurements, if you have them).