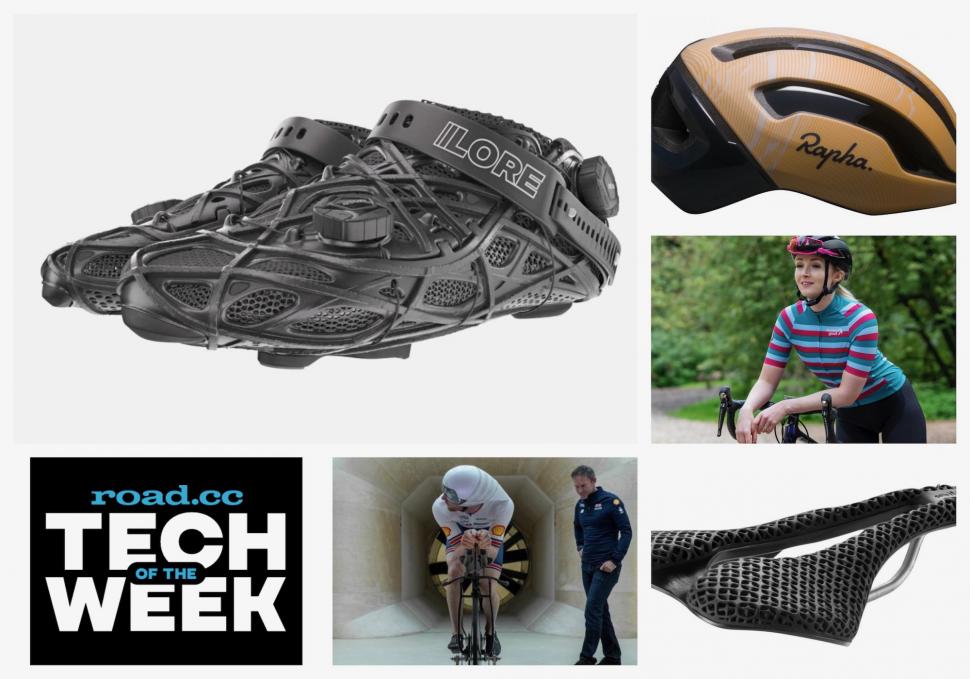 Will you be saving up for “the world's fastest cycling shoes”? Plus more tech news from Pinarello, Rapha, POC, Selle Italia, Gore, Stolen Goat and more

Find out about all of the week's top tech news, including the wind tunnel that Halfords sold for a quid
by Mat Brett

It has been a mega-busy week in the bike tech world with new products dropping like prime ministers, and we have new stuff from big brands like Rapha, Gore, Selle Italia, and MAAP. We’re starting, though, with news of LoreOne shoes that are said to be the world’s fastest. They’re certainly among the most expensive too.

The LoreOne, billed as the “world’s fastest cycling shoes”, are going into production after two and a half years of development, but you're going to need to dig deep if you want a pair. 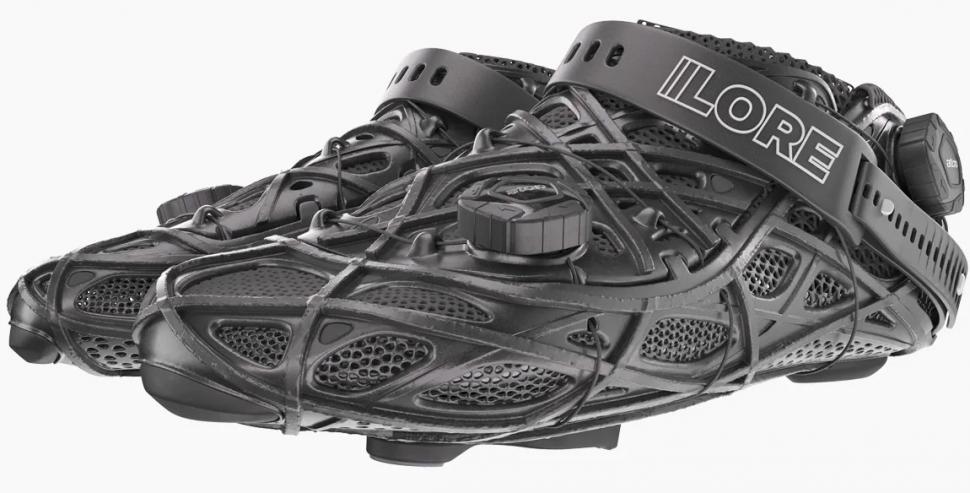 You might remember that we first told you about the radical-looking LoreOne shoe last year.

Lore says that it is the first to develop scan-to-print footwear technology which allows it to cater for any foot shape and size. It 3D prints “with continuous carbon fibre to produce a lightweight, stiff monocoque frame [comprising] complex organic shapes without the use of a mould. 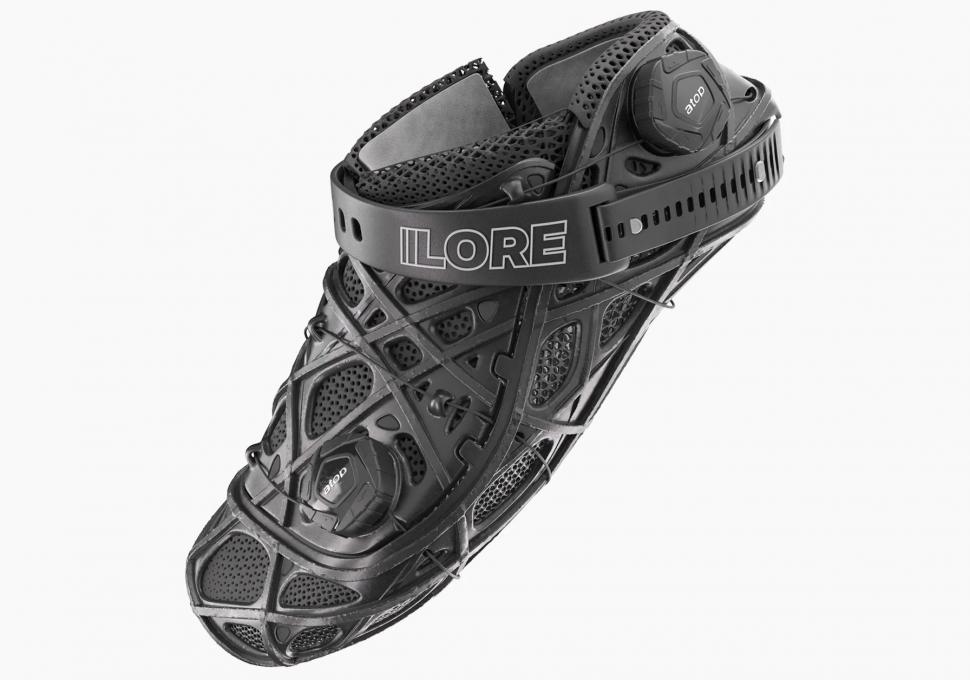 The LoreOne also features a “dorsal orthotic”. The idea is that this “aligns the foot from the topside, eliminating the need for supportive footbeds or orthotics”.

Lore claims that its shoe minimises dead spots at the top and bottom of your pedal stroke to increase your overall power output.

“With traditional cycling shoe designs, the soft upper bleeds energy on the dorsal (topside) of the foot,” it says. “LoreOne’s patent-pending custom CarbonAirFrame is designed to capture dorsal rotational energy to activate power through-put in the dead zones.” 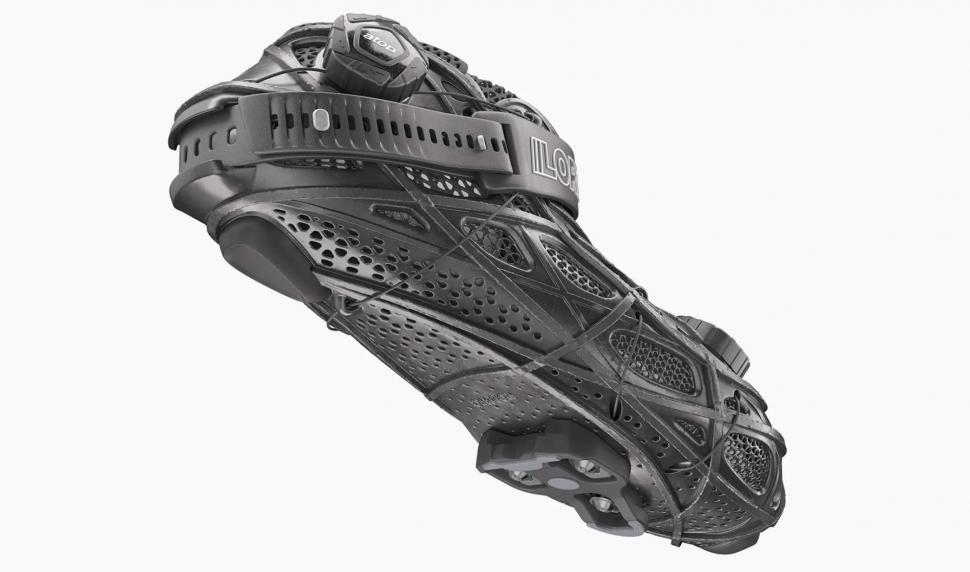 Lore also says that its manufacturing process improves sustainability on the basis that the final product precisely uses the materials needed and nothing more. The shoes are printed in California and are said to employ carbon-neutral shipping to your door.

The price? Ah! Well, that could be the sticking point. You’re looking at $1,969 – which is around £1,750… so, yeah, there’s that. If you do have anything left over when you’ve paid your heating bill, they’re available from next month.

You’ll know that Filippo Ganna set a spectacular new UCI Hour Record a fortnight ago that’s unlikely to be beaten for an age (unless Ganna himself decides to have another crack), and Pinarello has put together a video giving a behind-the-scenes look at the development of his Bolide F HR 3D (mainly), the athlete’s preparation (a bit) and the ride itself (not much).

If you’d like your own Bolide F HR 3D built up with the same components as Ganna’s you’re looking at approximately €75,000 (£65,800). You could ride it in your LoreOne shoes.

The Great Britain Cycling Team has officially opened the new state-of-the-art wind tunnel that it bought from Halfords for just £1. That’s a helluva lot cheaper than Ganna’s bike or those LoreOne shoes, although the bad news is that you can’t nip down to your local store and pick up a wind tunnel for a quid yourself. 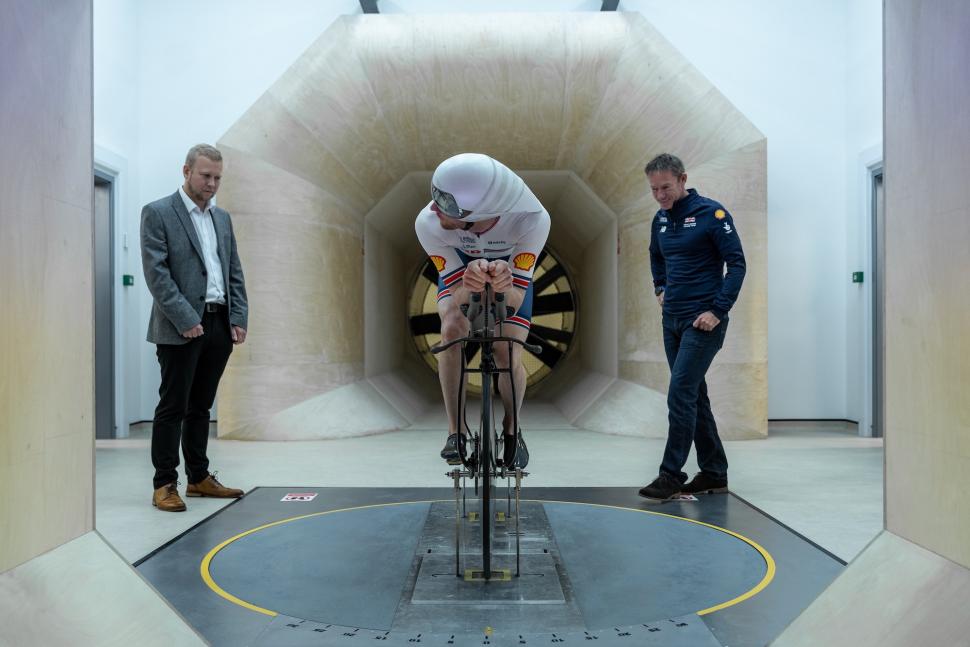 The tunnel, originally based at the Halfords-backed Boardman Performance Centre in Worcestershire, uses a finely tuned data capture system which feeds video imagery and information back to the rider in real-time. Aerodynamicists can continually tune wind speed and direction to mimic the conditions of any event or environment.

When the Boardman Performance Centre closed, Halfords sold the tunnel fan and control units to British Cycling for a token payment of £1. With the support of UK Sport and Manchester City Council, the tunnel has been rebuilt and upgraded to support riders as they push towards the Paris 2024 and LA 2028 Olympic and Paralympic Games.

The facility is based at the Manchester Institute of Health and Performance on the Etihad Campus in East Manchester, adjacent to the National Cycling Centre, and opens as the Great Britain Cycling Team’s track riders return to Manchester after spending the majority of 2022 training in Derby. 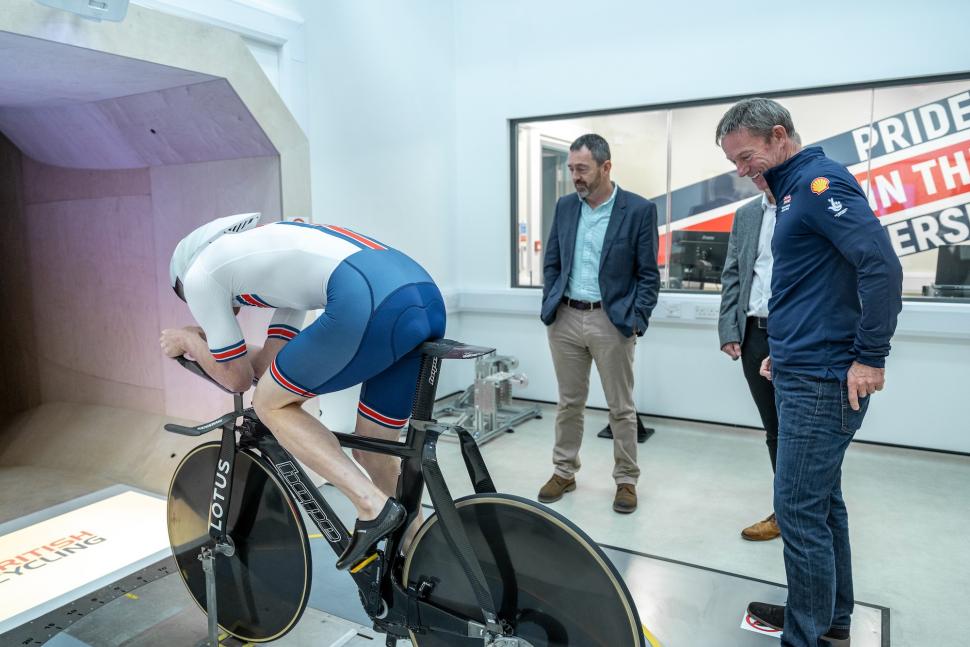 In addition to unearthing new performance gains for the next Olympic and Paralympic Games, British Cycling is already looking at how research teams will be able to benefit from access to the tunnel through cycling education programmes, equipment development and events.

Rapha has unveiled its second collaboration with Swedish brand POC (which, fact fans, stands for ‘Piece Of Cake’). There are two limited edition styles available. 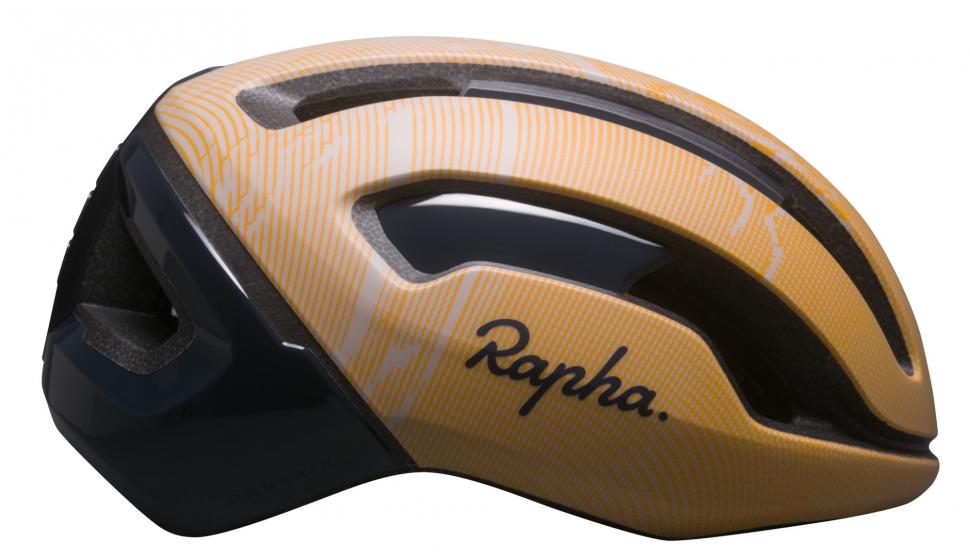 The Rapha + POC Omne Air Mips is for multipurpose road and gravel use. It features MIPS Integra which is designed to protect your brain in the event of rotational impacts.

>Find out everything you need to know about Mips here

The Rapha + POC Ventral Lite is a lightweight helmet, coming in at under 200g for a size M… and that really is feathery. This is the lid that the EF Education-EasyPost riders use mostly (although it doesn’t contain any kind of Mips safety system). 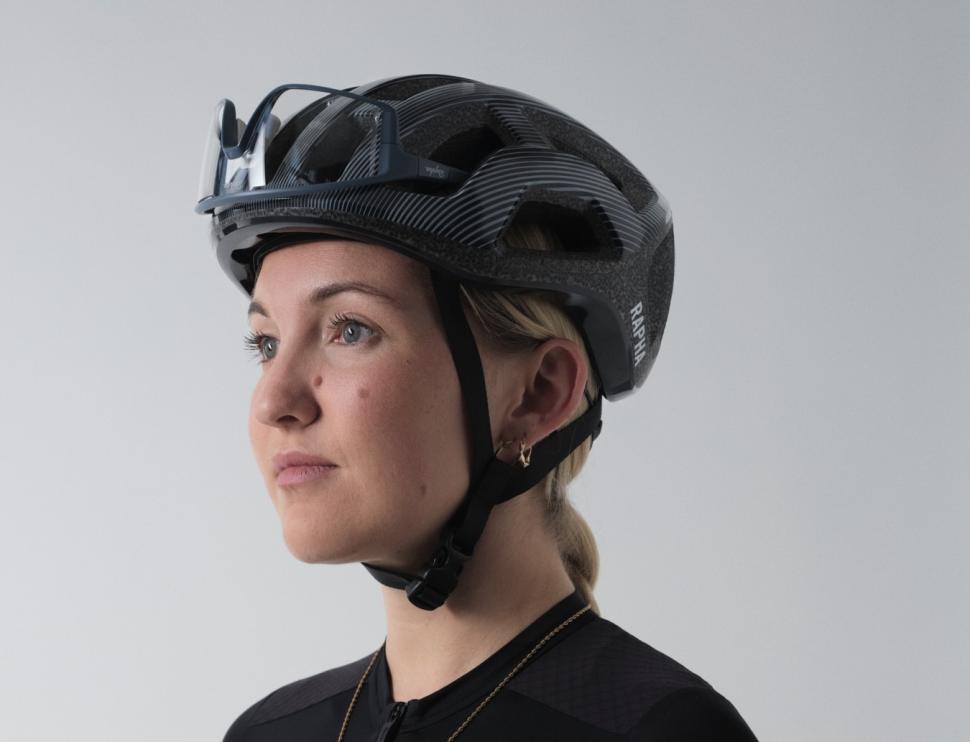 It features a scaled-back shell, a lightweight liner and webbed straps to cut the grams. You’re looking at £240 for this one.

MAAP has extended its Transit collection for urban riding with new clothing designed to be worn both on and off the bike. 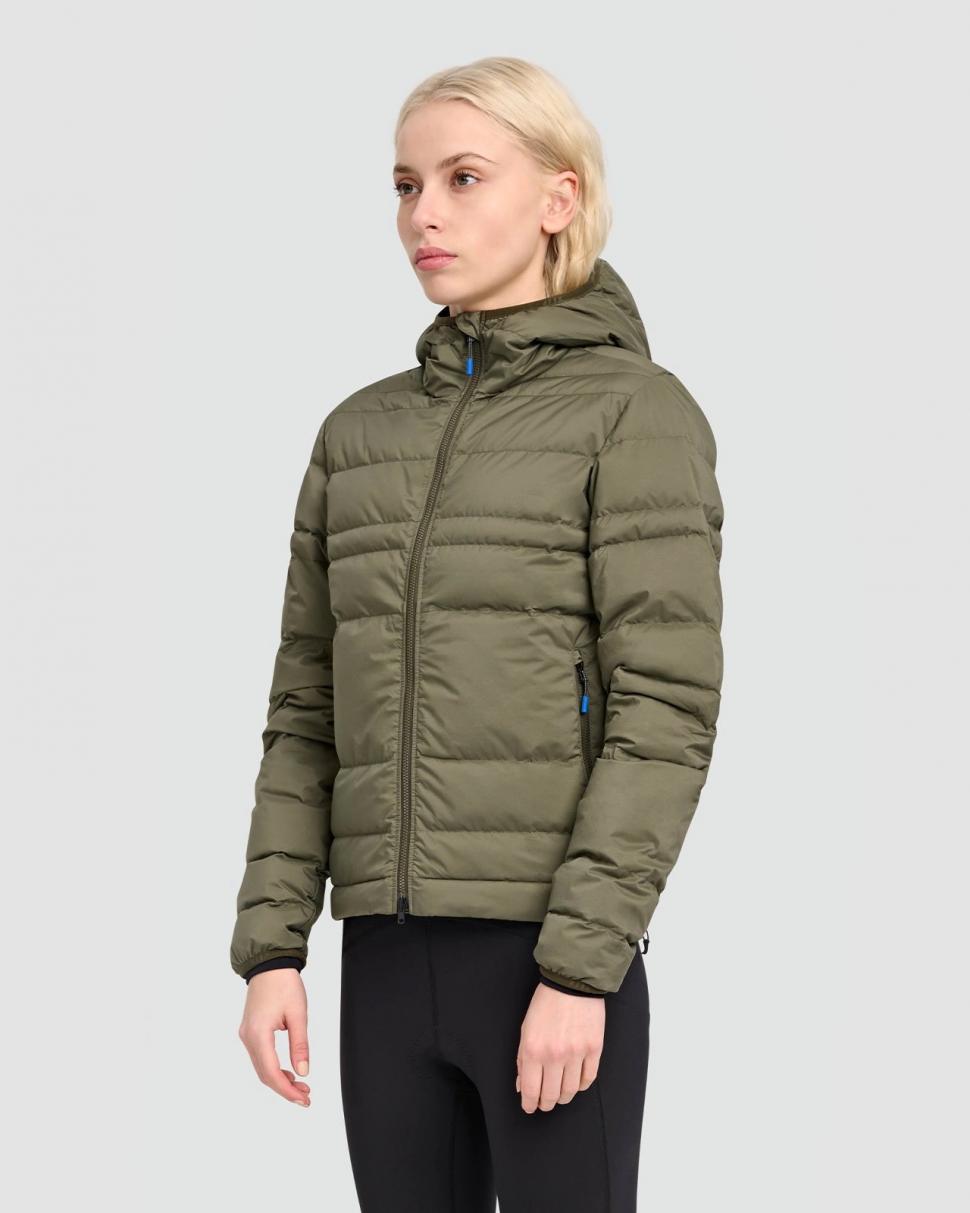 One of the key new items is the Transit Packable Puffer (£305, men’s and women’s versions are available), a down jacket that’s designed to be warm and stowable. The Pertex shell is water-resistant and treated with an additional durable water-repellant coating. 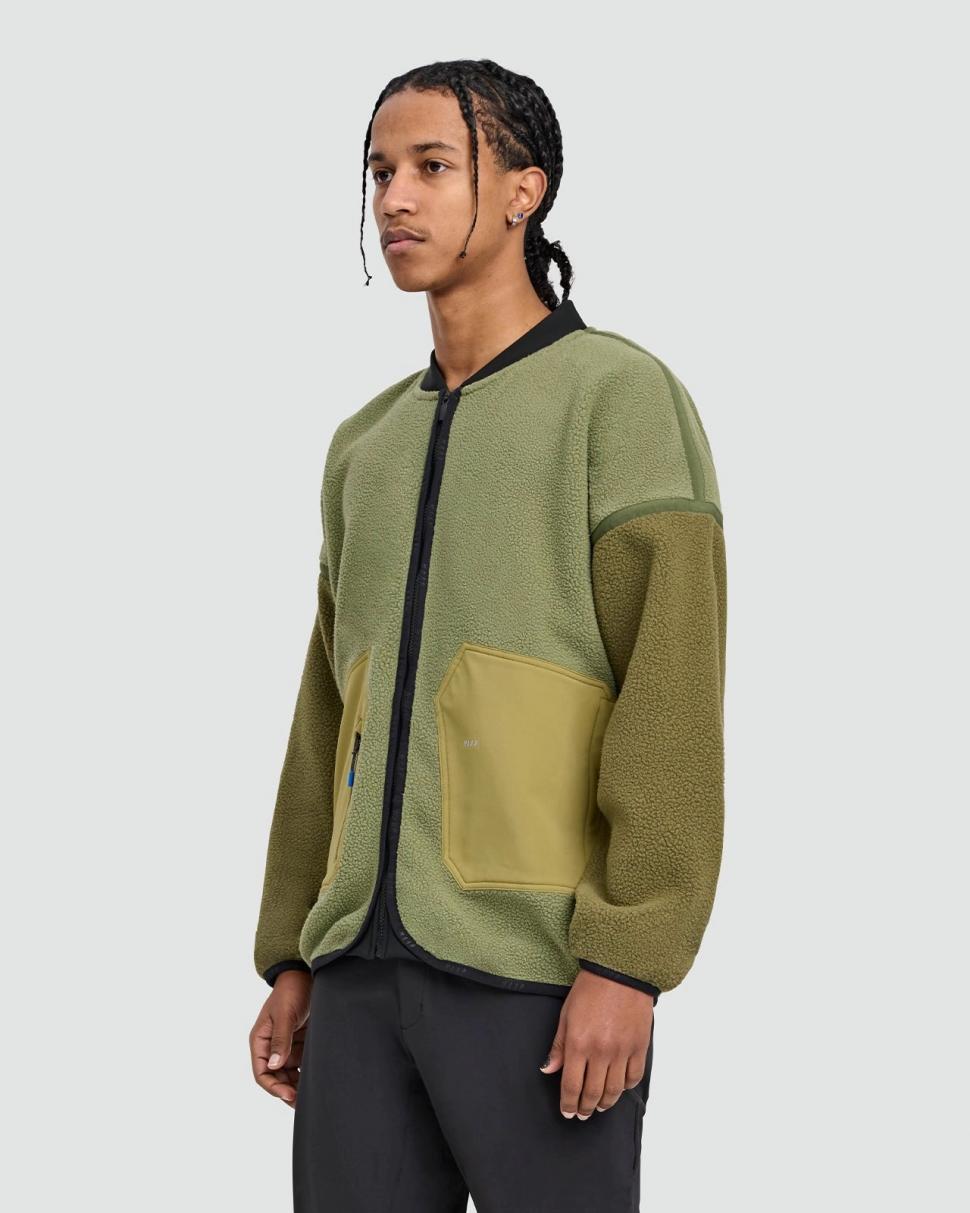 The Thermal Pro Fleece Jacket (£180) is made in a generous fit from a Polartec fleece and features two front pockets alongside additional stash pockets front and rear, all with YKK zips.

We told you back in July that Selle Italia would be introducing a 3D-printed version of its SLR Boost saddle and now it has been properly launched. It’s on Selle Italia’s website and everything. 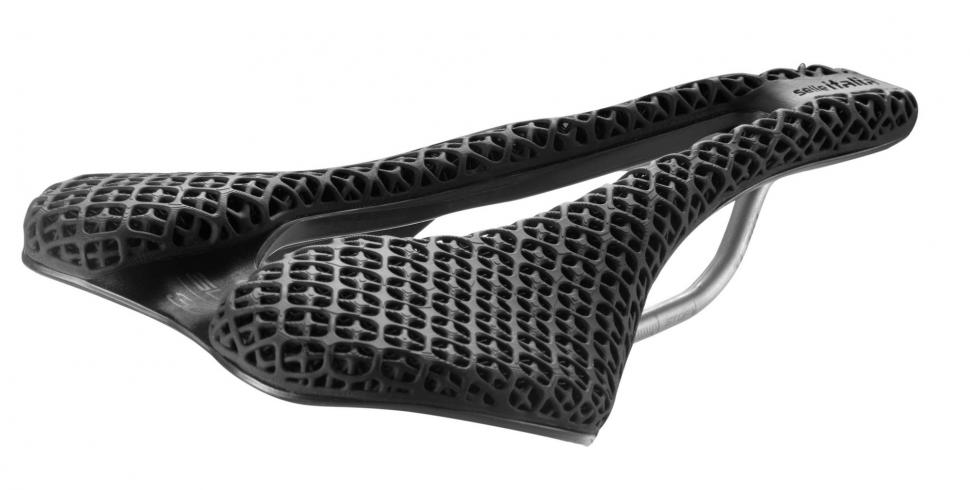 Carbon is a US company that already works with Fizik, Specialized and Selle San Marco on 3D-printed saddles.

“The cover has differentiated areas which create progressive cushioning over the entire surface,” says Selle Italia. “It also features the Superflow hole, designed to reduce pressure on the pelvic area.”

Stolen Goat has announced the launch of a range of cycling jerseys and jackets available to buy only through its network of stockists, not directly from Stolen Goat, the idea being to encourage more people to support their local bike shop and head in-store to see what's new. 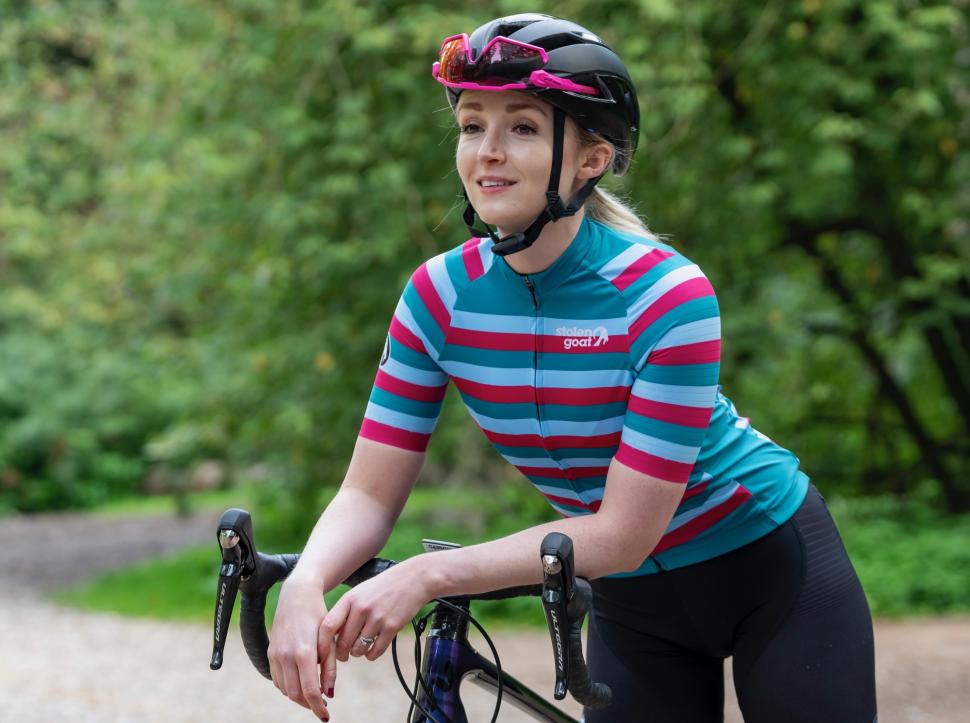 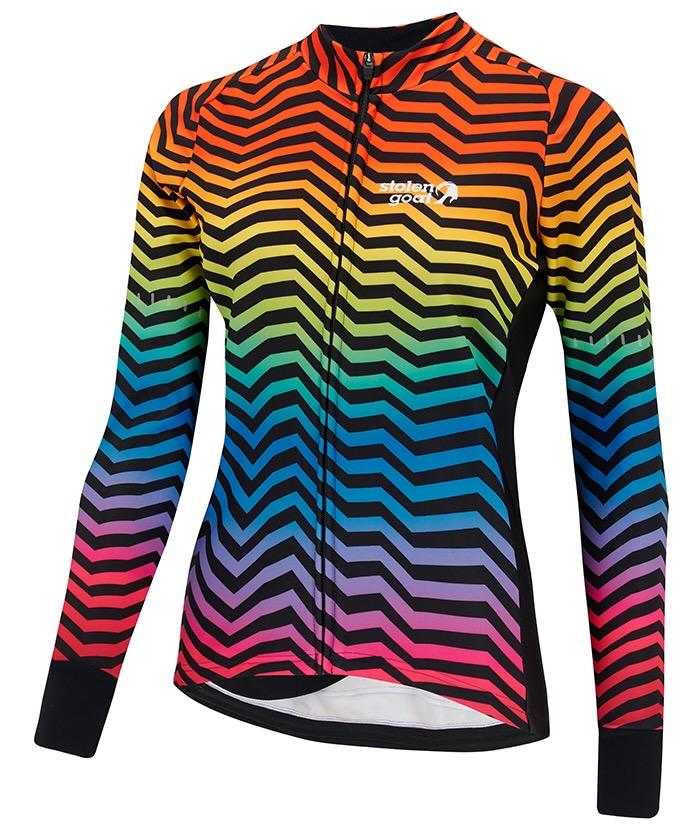 You can find your closest Stolen Goat stockist here.

Gore is offering its best-selling Endure jacket (£229.99, in men’s and women’s versions)  – designed for trails, bikepacking, and commuting – in a new ‘grid fade’ print. 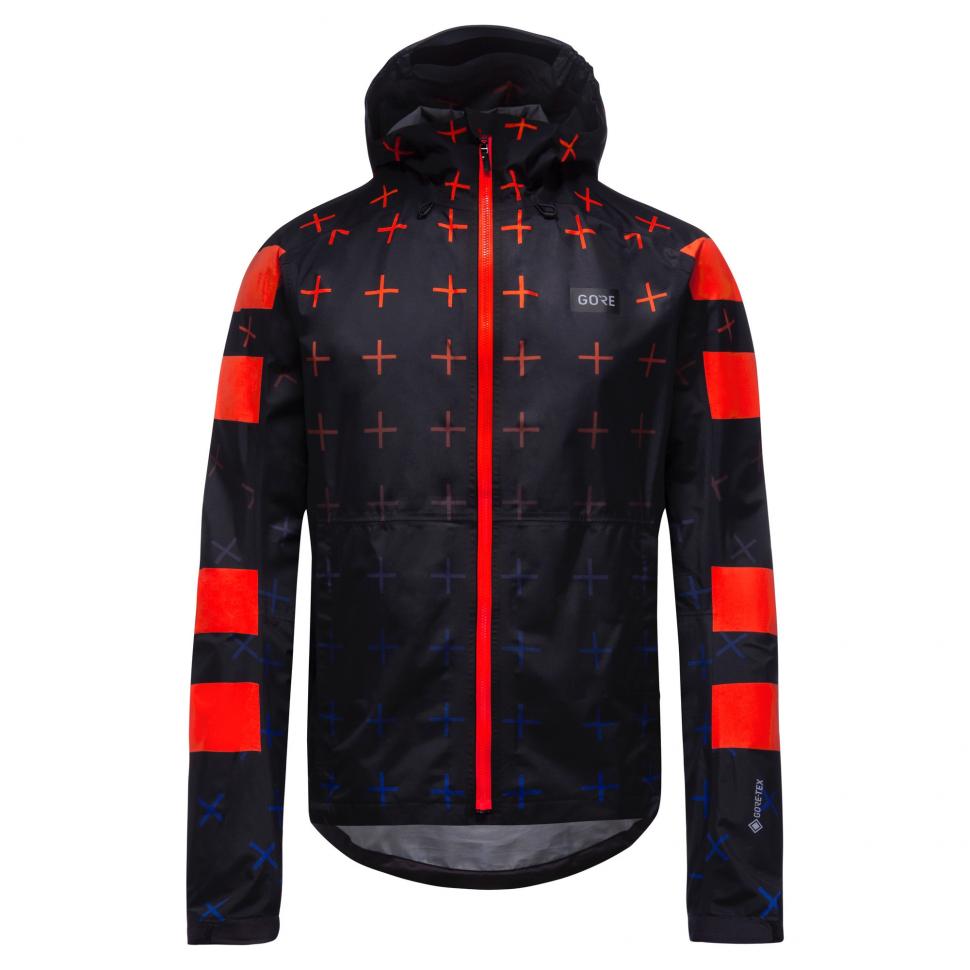 The Endure is lightweight, windproof and ultra-packable. The two-layer unlined Gore-Tex Paclite Plus construction has a Gore-Tex membrane laminated to an abrasion-resistant outer fabric.

The pattern is printed onto each garment part rather than the entire roll of fabric, the idea being to use less ink and reduce waste.

Gore has also added Sleet Insulated Overshoes (£99.99) to its range for the coldest weather and, again, these use Gore-Tex Paclite Plus fabric. 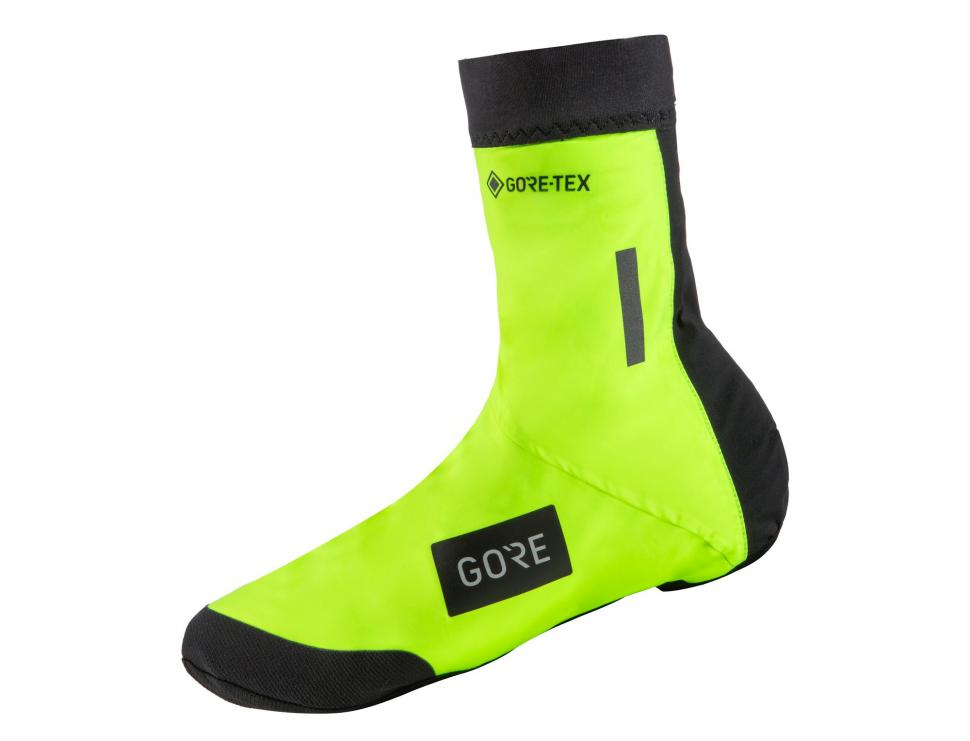 Cordura is designed to provide durability in the midsole and toe cap areas.