The Ravemen CL06 is a big, eye-catching 50-lumen rear light that's impressively well made. Run times, charging times and water resistance levels are all great, but while the car headlight detection feature works, the brake light sensor is a little sensitive.

The CL06 shares many similarities with Ravemen's CL05 – the clamp is identical and the weight is the same, but its flaws are much the same too. However, the CL06 is a useful 20 lumens more powerful for just £6 more.

You notice the construction of this lamp straight away. The plastics feel rugged, the build is very neat and the strong (IPX6) waterproof rating is easy to credit; the two buttons sit beneath silicone shields, and the USB-C charging port (small cable supplied) is chunkily plugged. 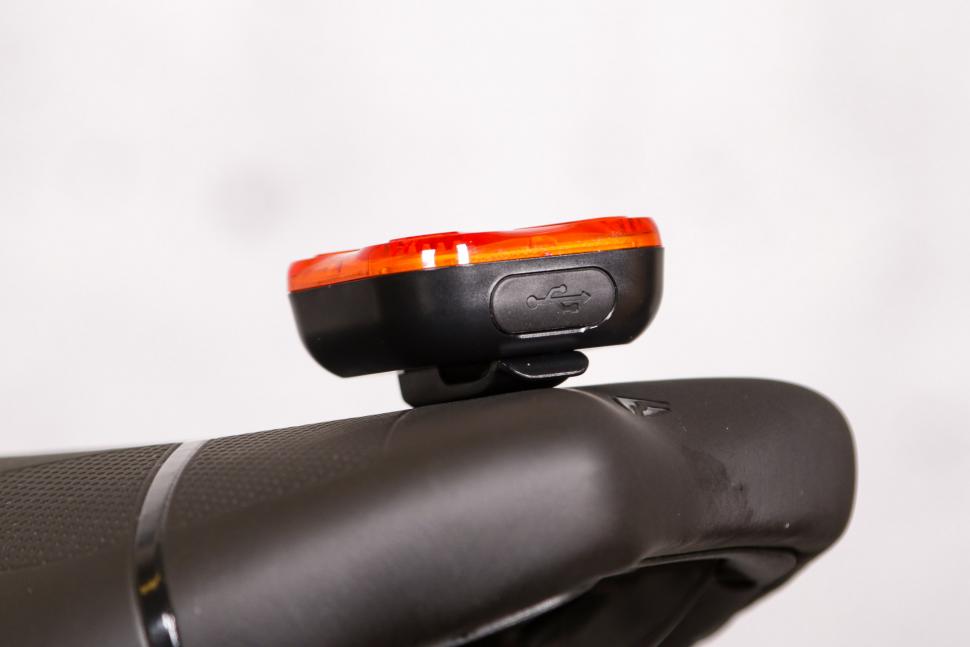 The clamp is similarly impressive. The silicone strap is long and adjustable enough for any diameter seatpost, while the deep V-section silicone backing smooshes effectively against both round and aero posts. Once on it's secure and vibration-free, and the bracket adjusts for angle. 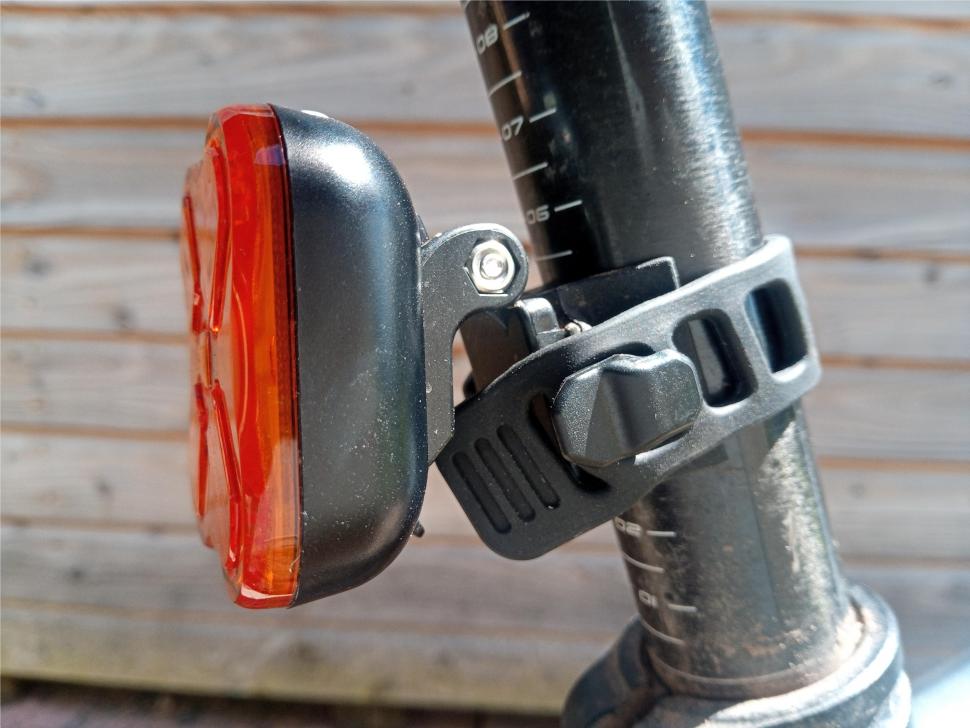 You can also just clip the light directly to a strap with the hook on the back.

Just about everybody says their flashing modes are 'eye-catching,' but the CL06's are really disco. The big, flat lens really pumps it out, and there's a useful wraparound for side vision at junctions. 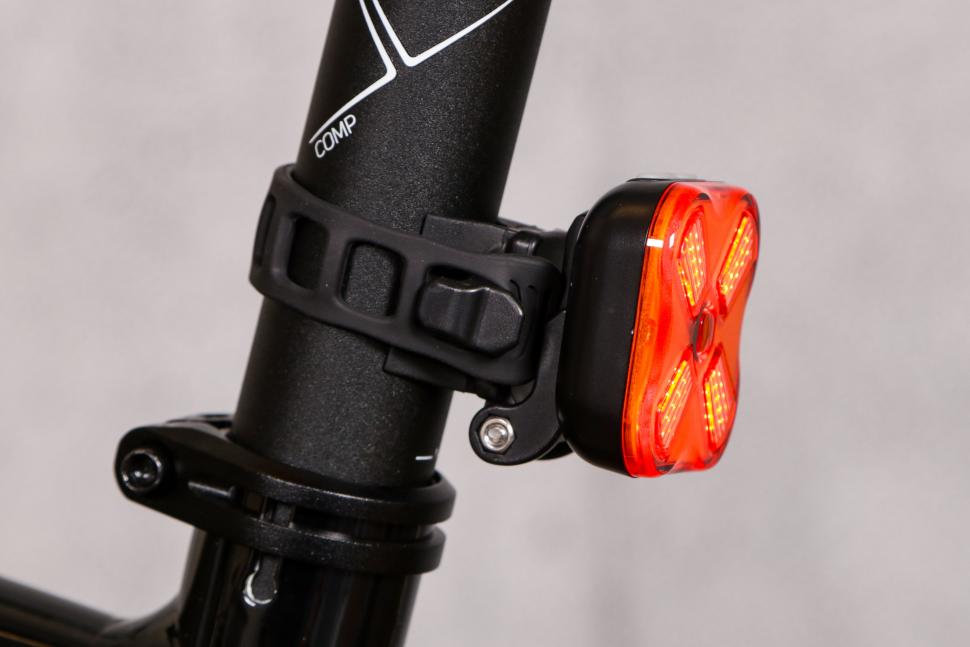 It has four patterns to choose from, plus low or high solid modes. Oddly, the most frugal mode here is the least frugal one for the smaller CL05 – for this light, 'rapid flashing' lasts a claimed 30hrs. It can't be the battery making the difference as they're both single-cell lipos, but at 500mAh the CL06's battery has more than twice the capacity.

That's another reason to go the extra £6 over the smaller one – the CL06 lasts ages, even on full power solid mode, though I didn't quite get the claimed run times. On full power (with no sensors) this lasts around 45 minutes short of the claimed 8 hours, though that's still usefully long. At around 7 hours 15 minutes it swaps to a flashing mode that manages just under an hour, before totally giving out.

That 500mAh capacity gives the CL06 enough juice to include a brake light function alongside the brighten-under-headlights sensor. Switch either on (you can activate them separately) and, when the unit detects either deceleration or car lights, it starts flashing at the full 50 lumens.

Usefully, the light remembers the brake light status along with the mode when you power off and on.

It takes a bright light to set off the headlight sensor (50 lux, says Ravemen), but the braking sensor – as in many similar lights – is rather sensitive and prone to accidental triggering. It's presumably just an accelerometer in there, and testing shows that accelerating the unit in any direction at all (quite gently too) triggers the flash.

Both of these sensors reduce the run times by completely unpredictable amounts, which can be awkward, though that big battery will still last at least one big ride. Plus the emergency flash mode saves you from a sudden plunge towards invisibility.

The CL06 just about avoids the irritating 'identical blank buttons' look of its little brother, but only by having one (the on/off) slightly longer than the other. Their markings remain near-invisible, as does (at least in daylight) the blue lamp indicating the headlight function status.

At £31.99 it's reasonably priced for its quality and features, though it's literally outshone by many cheaper lights. The Gemini Juno 100 is twice as bright for £29.99, for instance, though the run times aren't all they could be and there's no sensor.

The Magicshine Seemee 100 is also twice as powerful and matches the CL06 with an oversensitive braking function for £25.99, while £31.99 gets you the full 180-lumen version instead. All these will be better for daytime use.

Despite a few niggles, the Ravemen CL06 is still a good light that's easy to like. The quality is obvious, the design is generally good – especially of the clamp – and it's very noticeable for everything but the brightest of sunny days.

Ravemen says: "CL06 is a lightweight and easy-to-use rear light. Featuring four COB LED rings and built-in light sensor, it provides a maximum of 50 LED lumens on warning flashing mode, great for busy night street commuting or city riding. With the flexible rubber strap mount and mounting clip, the light could be mounted to round and aero seatpost or clipped to some compatible saddle bags or backpacks directly."

Mount Size: Compatible with 24-36mm round seatpost and aero seatpost

The two buttons are hard to distinguish, and the blue glow of the sensor button is invisible in daylight so you might not realise it's on.

Very well, though the buttons could be easier to distinguish.

At £31.99 it's reasonably priced for its quality and features, though it's literally outshone by many cheaper lights. The Gemini Juno 100 is twice as bright for £29.99, for instance, though the run-times aren't all they could be and it has no sensor.

The Magicshine Seemee 100 is also twice as powerful and matches the CL06 with an oversensitive braking function for £25.99, while £31.99 gets you the full 180-lumen version instead.

In general this is a very well made, very well designed light with very usable run times. If the buttons were more easily distinguished and it were a chunk more powerful it would be better, but even as it is it's a quality unit and a 7.