7
10
Powerful, solidly made light with practical run-times but its braking feature is too sensitive
Bright
Simple to use
Frugal in flashing modes
Nice mount
Braking mode eats into run-times
Weight:
50g
Contact:
magicshineuk.com
How we test

On paper, the Magicshine Seemee 100 rear light is less powerful and feature laden than its 180 and 200-lumen siblings. However, in the real world I reckon it hits the sweet spot when balancing power and economy.

While less powerful than its siblings, there are common similarities. The 100 also features 'braking' technology and a sensor that can regulate light according to conditions. Sensibly, these can be overridden to maximise the lithium ion battery's run-time, and the unit will automatically kick down to the 18-lumen low when reserves dip to 5%.

It uses transparent optical filters to spread the beam 260 degrees, and its IPX6 rating for weatherproofing is reassuring.

Three constant and four flashing modes plus the smart sensor complete the line-up. The latter allows the unit to decide what output to deliver, according to lighting conditions.

The headline 100 lumens refers to the brake light function; in real terms, output is 72, 36 and 18 lumens, which should be sufficient for most riding contexts, even the darkest of country roads.

Lastly, there is the ambient light 'smart' setting which will automatically dial the power up/down to suit conditions. It's not essential but useful enough. For example, if finishing an afternoon's ride and dusk is in hot pursuit, it will automatically switch to a higher mode.

The switch is a pronounced rubberised affair with integral battery/charge life indicator. A sustained two-second press turns the light on/off. A definite double press will switch between constant and flashing modes. Subsequent single presses will scroll through them.

Switching the brake light function on/off is a question of pressing the switch and holding for five seconds.

This consists of a Garmin-type head, which the light clicks into securely. The watch-type strap is designed to tether to seatposts, tubing and helmets. 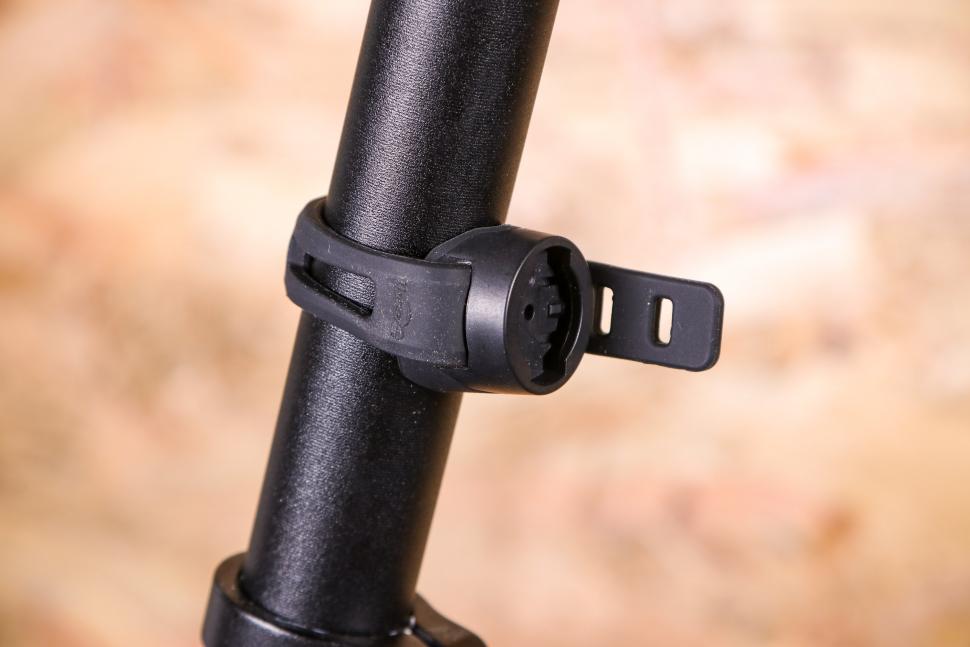 I had no issues attaching it to aero or standard diameter posts, or even relatively slender seatstays, and was pleasantly surprised to discover the Seemee straps have sufficient elasticity to weave through helmet vents and tether very securely.

There is also saddle rail clip for those wanting a really sleek bike-mounted option.

While I really like the 200 and 180 counterparts, objectively I'm inclined to say the 100 gets my vote for road-biased riding.

I started by defaulting to the smart setting and letting this decide the light's output. In the daylight setting this ranges from 5-70 lumens.

I was a little sceptical of Magicshine's claim that it's visible up to a mile and a half. Friends reckoned they could spot me from 400 metres or so, which is still impressive.

The auto sensor meant it seemed to track at 18 lumens in better lit areas (so you're not burning retinas, or reserves when in congested traffic) and switched to 70 along the dark lanes.

On very dark nights, some have suggested they clocked me at 600 metres, maybe more on a clear night, in the highest flashing mode. It was much the same story in the others, it's just the tempos and run-times that differ.

The lens's translucency means there's a good spread of peripheral light – I've not experienced any stealth moments, even turning right at concealed crossroads.

Using the smart light, Magicshine cites 12 hours from daylight running; I returned around 8 hours. Curiously, at night run-times came within a few minutes of the 3 hours cited, the light seemingly alternating between the 18 and 72-lumen modes with greater accuracy.

Manually, I've defaulted to Flash for its mix of punch and economy: 9hrs 55mins from a full charge. Breathe and Comet are both eye-catching but run-times take a hit: official figures are 2hrs 30mins and 3hrs respectively (ours came within 3 and 4 minutes of these). Not really conducive to longer night rides.

In terms of constant options, 18 lumens is bright and will deter blatant wheel sucking, but agreeable enough and visible at 100m through town, 125-150m along semi-rural stretches. Mid (32 lumens) has the edge along really dark lanes. Anecdotally, friends reckoned they could pick it out at around 220 metres. The 72-lumen high is good for 300m but you'll be out of juice within 90 minutes.

The brake light function is a common feature within the Seemee family and not without some merits. It really ramps up the light's intensity, which is particularly useful when in slow-moving traffic or when scrubbing some speed off, like on a long descent.

My main gripe with the current design is that it is too sensitive, triggered by minor lumps and imperfections to the point it really hammers the battery life. Just 90 minutes from a full charge has been all I've managed, even in the flashing modes. Admittedly, that's with a few long climbs into the bargain, but you get the idea. Thankfully, and in common with its siblings, this function is easily disengaged by depressing the switch for five seconds.

Charging is very straightforward and takes 2 hours zero to hero (tack on another 15 minutes if you are refuelling from a laptop/similar).

Visually, the charging light will slip from red to green when fully juiced. The switch works as a battery life indicator too, if a little crude: green means between 100 and 21%; red denotes 20-6% remaining, and flashing red means only 5% of battery is left, inducing the auto kickdown.

At £26, the Seemee 100 represents decent value for money. It's a few quid more than than the Xeccon Mars 30 at £21.99, but also more powerful and better thought out. The Mars also has a braking function, but that and the bracket need refining.

> Buyer's Guide: 18 of the best rear lights for cycling

Blackburn's Dayblazer R65 is £27.99 and is a very good light but doesn't have a memory or braking function.

Lezyne's KTV Pro Alert Drive also has a braking function and costs £30, with a maximum output of 75 lumens. Its brighter Zecto Alert Drive (80 lumens max) and Strip Alert Drive (150) siblings are both £40.

Having used (and generally liked) its bigger siblings, I'm inclined to say the Seemee 100 is the most practical choice for long rides along really dark roads. It also has some very appropriate settings for town and group riding. Thankfully, the braking function can be switched off, since it's too sensitive and only practical on shorter rides.

Memory function: Saves the last mode used when the the light was turned off

Feels solid throughout; conforming to IPX6 for weatherproofing adds confidence in foul weather.

Intuitive to use but get familiar with the instructions rather than 'winging it' (so you can switch the 'braking' function on/off as required) before setting out.

Very impressive for the most part and in some respects a more practical choice than its 180 and 200-lumen siblings.

At present there are no obvious weak spots; charging and run-times remain consistently faithful to those cited.

It's hardly hefty at 50g, but these days there are units around the 27-30g mark.

Despite my reservations regarding the braking function, there is no doubting its intensity, which is particularly helpful on foggy/overcast days. Nonetheless, the other modes are more than a match for most riding contexts and generally offer a good balance between presence and run-times.

A great balance of performance and economy, generally sensible modes and quick charging.

Braking function is too sensitive and consequently puts a major dent in run-times.

At £25.99, the Seemee 100 is good value for money. It's more powerful and better thought out than the Xeccon Mars 30, which comes in at £21.99, has a braking function, but it only produces a maximum of 30 lumens and is somewhat scuppered by a silly bracket.

Blackburn's Dayblazer R65 is £27.99 and is a very good light but doesn't have a memory or braking function.

Lezyne's KTV Pro Alert Drive also has a braking function and costs £30, with a maximum output of 75 lumens. Its brighter Zecto Alert Drive (80 lumens max) and Strip Alert Drive (150) siblings are both £40.

A great light with usable modes and generally decent run-times, but the braking function is too sensitive and consumes battery reserves unnervingly quickly.