The Magicshine Seemee 180 is a high power rear light with impressive output and – when the braking function is tamed – reasonable run-times, especially in the flashing modes.

There's quite a bit of technology crammed into the Seemee series, with the lens employing vertical and horizontal diodes, which are apparently designed to project light most effectively, and using Chip on Cord (COC) technology. It's all fed by a lithium ion battery reckoned good for 500 charge cycles (which should be at least two relatively heavy years' use), sealed within a sturdy composite shell.

The 260-degree peripheral claim looks a bit dubious until you scrutinise the shroud, which is translucent, allowing the light to bleed through.

It's rated to IPX6 waterproofing, which means it will resist jets of pressurised water, so should take even Britain's most inclement weather in its stride. The micro USB port plug is a superior fit to most, too, without being fiddly. 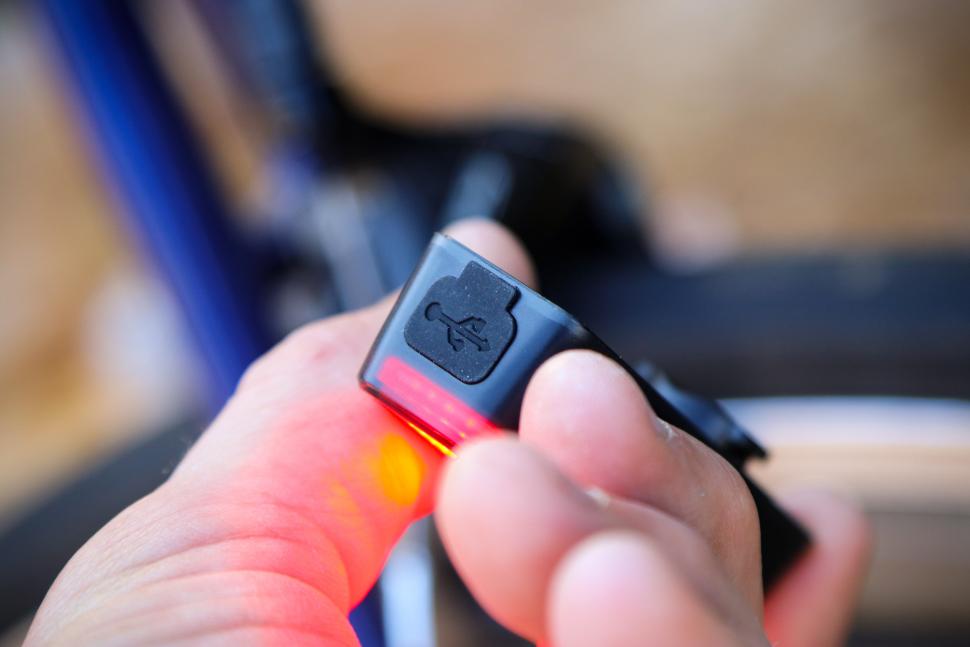 There are seven modes – technically eight, if we're counting the smart function that automatically switches between day and night modes, which is rather neat.

As for the smart day and night modes, these range from 3-125 lumens and 9-125 lumens respectively, as chosen by the light's ambient sensor.

The brake light function can be switched on and off by depressing the switch for five seconds when powering up.

Thoughtfully, the system has an auto kickdown, which engages once reserves tumble to 5% and theoretically buys you 20 minutes before the unit powers down completely and needs charging.

Charging takes two hours through the mains, longer through laptop ports and other devices. It registers green when fully juiced, defaults to red when you're at 20%, and flashes red furiously when you're at the critical phase. I would have preferred an amber for more insightful feedback, but there we are.

This is a mini Garmin type head and is designed to accommodate both aero and standard diameters. I've had no issues with seatposts between 26.6 and 31.8mm or seatstays. 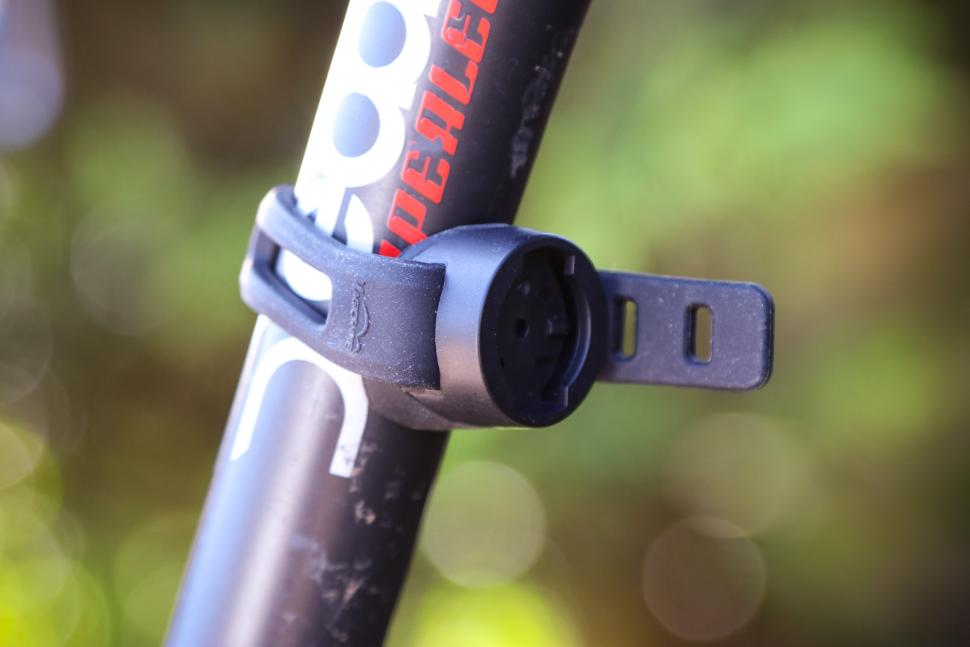 I tend to remove lights and brackets when locking bikes in the street, but the head unit releases and refits easily with a half turn. This family of lights also has a saddle rail bracket, although these weren't included with our samples.

As the numbers suggest, this is a very bright light. The daylight mode is very obvious, much like its Seemee 200 sibling, and visible from a very similar distance from behind – half a mile or so. Ours seemed faithful to the cited 3-18hrs in certain contexts, but expect it to vary, given the system's self-regulating tendencies and autumn/winter's variable light.

Its peripheral punch doesn't match that of some, but I've had no 'stealth' issues from the side.

As regards the braking function, as you might expect this is designed to emit a more intense beam when you are slowing – including on a long climb – and it can be very thirsty. For example, I've had a mere 80 minutes from a full charge using the Comet flash (cited run-time is 3hrs 30mins without the brake light on).

Comet itself is incredibly bright – friends reckoned they could spot me from 400 metres on very murky mornings – but I'd say Flash is the most extrovert setting; anecdotally, following riders and drivers suggested they'd picked me out from 400 or 500 metres on pitch black roads.

Frugality is another definite draw of Flash – cited as being 10 hours. Real world (once I'd disengaged the braking function) it seems within a few minutes of that – 9hrs 54mins is the closest I've got. It's too aggressive for town, where I've tended to dip to the 'smart' mode, handing control to the light's sensors, or gone for the low steady, which is 27 lumens. It should go without saying that this is probably the best option for group rides, unless you're doing a turn at the back.

Using the smart sensor also eats into run-times – I've come close to the night setting's 3 hours, which may well be enough for a long commute or training ride, but you'll need to be disciplined on the charging front.

Interactive is another great choice for longer training runs, or endurance rides, although ours seemed to manage 5hrs 40mins and then slipped into the 27-lumen kickdown flash, buying a final 20 minutes. Even that is bright – and perfectly adequate along pitch black roads when seatstay or helmet mounted.

In common with its siblings, at £31.99 the 180 offers a fair amount for moderate money.

Fabric's £29.99 FLR30 rear light is cheaper but less powerful (although I'd generally agree that 30 lumens is adequate for most situations) – crucially, though, Fabric seems to have got the braking function sussed.

Lezyne's KTV Pro Alert Drive (full review to come) also has a braking function, for £30, but its maximum output is 75 lumens. Its brighter Zecto Alert Drive and Strip Alert Drive siblings are both £40, and neither matches the Seemee 180 for output.

I'm really liking the Seemee range and the 180 is no exception. I'm not overly taken with the braking function, which seems too sensitive and ruinous to run-times – especially if you are living in hilly regions, or tackling lumpy lanes – but its tuneability means it's a practical option for endurance rides along unlit roads.

Powerful rear light with generally sensible modes, but the brake light function is thirsty and over-sensitive

Magicshine says, 'The Seemee 180 is a powerful bike tail light for road, urban, and mountain bikers, with wide-angle visibility, low power flash mode, and a brake sensor, on brake the flash output is 180 lumens.'

Memory function: Saves the last mode used when the light was turned off

Well made and feels solid.

Broadly intuitive, once you have become acquainted with how to switch the braking function on/off.

Very well sealed. Ours hasn't missed a bit through some very heavy rain and being doused in dodgy water along back roads.

All told, quick to charge and run-times have been in line with those cited.

Output is very impressive, run-times are very reasonable too. However, the braking function is way too sensitive, triggered by washboard tarmac and long climbs.

Unit feels solid and no obvious weak spots to date.

Its 50g wouldn't faze me, especially given the output, but it's heavier than some strip-light designs.

Compares well with similar. A high spec and good performing package for the money.

Overall performance has been impressive, especially (but not exclusively) along long sections of unlit roads, with sufficient tuneability for town and group riding. I can see the advantage of a more intense 'braking' function, especially attached to a trailer/tagalong, but the present system is too sensitive and, in its present guise, only suitable for shorter distance rides.

Braking function too sensitive, ultimately draining the battery too quickly.

In common with its siblings, the 180 is good value. Fabric's FLR30 is £29.99 and less powerful, but seems to have the braking function sussed. Lezyne's KTV Pro Alert Drive also has a braking function, for £30, but a max 75 lumens, while its higher output siblings, the Zecto Alert and Strip Alert Drive, are both £40 (and neither as bright as the Seemee 180).

Would you recommend the light to a friend? Yes, with certain provisos.

Braking function needs revising, but otherwise this is a very capable rear light at a good price.