The Giant Recon TL 100 is a compact, lightweight, good value rear light that offers plenty of performance despite its bijou size and 100-lumen output.

Even though it's Giant's lowest-priced rear light, the Recon TL 100 is powerful enough to use as a daytime running light as well as a night-time light. With its low weight, neat proportions (it's a 3cm cube), good run-times and intuitive functionality, it will appeal especially to riders who want to keep their bikes light but who also want to stay visible.

Giant's description is the same for the Recon TL as for the HL – high-powered visibility at an accessible price – but whereas the companion HL front light is limited to daytime or streetlit riding only, 100 lumens at the back is enough to make the TL the only rear light you need.

I've used it for school runs on the tandem and also during a solo night ride with a friend to check whether the HL might be bright enough to work as a 'seeing' light (it isn't – full review to come). However, the verdict on the TL was that it was very bright, almost blinding to ride behind on full constant mode at night. Fortunately, it has five modes including a lower constant which is great for group riding. For solo riding there are three flash modes, including a daytime-specific one to match the front, whereby on every fourth low-power flash it emits a full power one. This one is good for waking drivers up on the morning commute, and it seems to remind them to pass us with enough space on the road.

Run-times are good for a light with its diminutive size: 3 hours on constant full power and 18 hours on low flash. LEDs behind the switch change from green to red to indicate battery life, and the light will automatically switch itself to low flash mode before expiring. 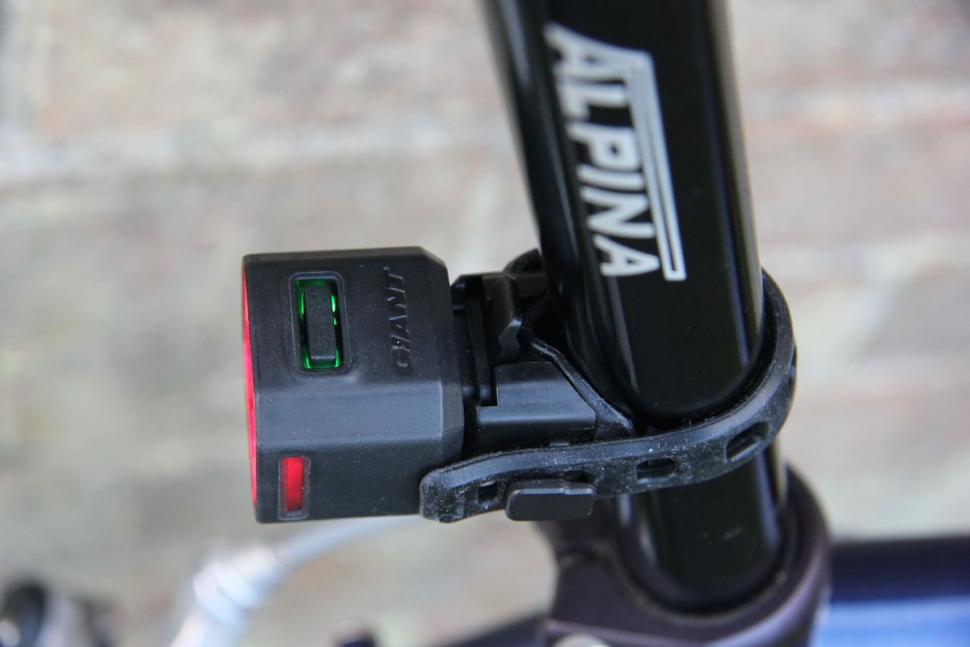 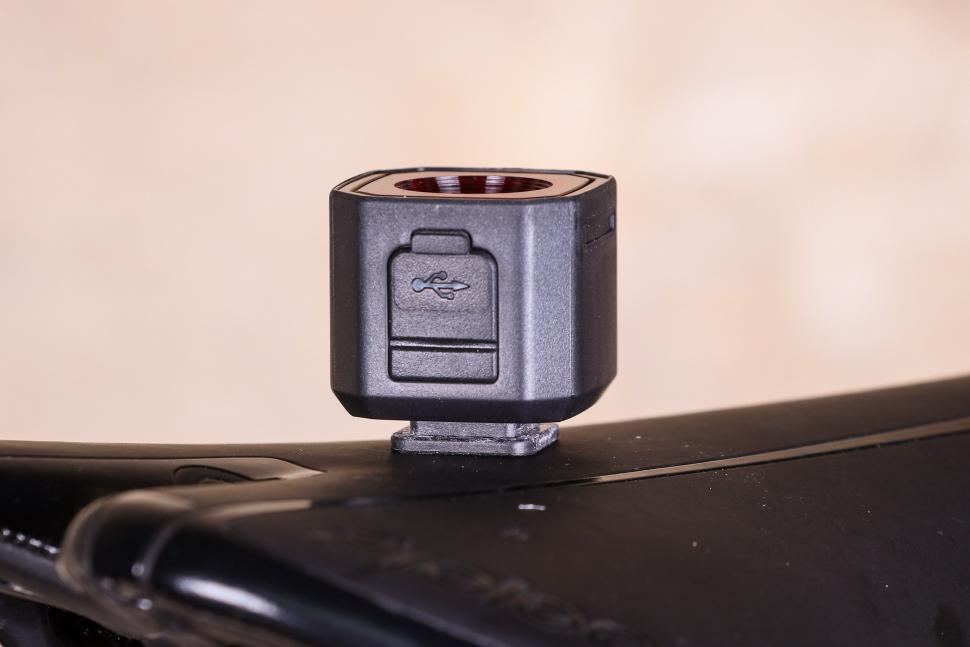 Although Giant claims 180 degrees of visibility, both this one and the HL front have opaque slots at the sides that don't quite let enough light through to fully justify this. For night-time town riding, especially for passing T-junctions, this could be better.

In the box you get the basic rubber band and hook clamp with a rubber wedge insert to ensure it's pointing directly backwards from a 73-degree seatpost but it's easier to take the whole thing off rather than fiddle the light out of the clamp – into which it fits very tightly – and leave the clamp on the seatpost. It uses the same clamp as the twin-LED Recon HL 200, which can be positioned horizontally or vertically. However, as the Recon 100 lights are cubes with single bulbs it doesn't make any difference which way you put them into the clamp – but if you put it in without paying attention to which face the switch is, you can end up trying to press a side visibility slot instead, because – probably for the sake of aesthetics – they look similar.

The switch is easy to operate with thick gloves despite sitting flush with the casing. Modes are changed by short presses on the switch – generally, everything is intuitive. Waterproofing is great, too: I have left it on the tandem outside in the rain overnight many times in the last month and it still works and charges perfectly.

The ETC Mira is smaller and cheaper at £16 but Shaun's test concluded that it's only bright enough to be a backup light. The Infini Olley is slightly cheaper at £21.99 but again offers only 20 lumens. The Giant is a penny less than the 75-lumen Lezyne KTV Pro Drive. To conclude, it's good value. After that, you're jumping up to something like the Lezyne Strip Drive 150, which costs £35.

Giant says: "The Recon TL100 is easy-to-use, ultra-portable and lightweight. With an integrated power indicator and IPX7 waterproof certification, the Recon TL100 provides high-powered visibility at an accessible price."

I love the look – a minimalist cube that's like a cool kid's toy. But I did find it a bit tricky to identify the switch at first and kept trying to press one of the similar-looking side-visibility slots to switch it on and off.

The clamp holds the light to the bar very well and is easy to attach and detach, but the light itself sits very firmly in the clamp and pulls out of the clamp in the same direction as your thumb holding down the release button, making it a bit awkward. It's easier to take the whole clamp and light off the bar each time.

Full marks. It's still singing in the rain.

Impressive run-times for such a small, lightweight light, and two hours to recharge it is good too.

It's still looking as good as new after a month of commuting in all weathers.

This light is great news for safety-conscious weight weenies.

The ETC Mira is smaller and cheaper at £16 but we think it's only bright enough to be a backup light. The Infini Olley is slightly cheaper at £21.99 but again offers only 20 lumens. The Giant is a penny less than the 75-lumen Lezyne KTV Pro Drive. To conclude, it's good value.

It performed perfectly as a daytime running light and for night-time riding.

Nothing serious – the side visibility could be brighter and maybe the clip easier to use, but otherwise it's an excellent product.

The Recon 100 TL is very small and light but impressively bright, charges in two hours, run-times are good and the price is low. It doesn't really supply the claimed 180-degree visibility because the side slots are too dim to be useful, but overall it is excellent.