Despite its compact design, the ETC Mira 20 Lumen COB rear light is more intense than figures would suggest. It's arguably perfect for extended playtimes on the best bike and general riding, though I'd pair it with a larger, dome type rear light if regularly riding along unlit roads.

That intense light is courtesy of the COB technology, meaning more diodes can be pressed into a given space. The Mira has 15 within its 41x33x23mm cube – dimensions that should please the most clutterphobic of riders.

A positive centre-mounted switch promises to be more durable than the lens-as-switch type, while remaining user-friendly when wearing winter weight gloves. It's easily located yet not too readily engaged. Powering up requires a sustained two-second press; once engaged, double presses switch between constant, flashing and pulsing, and a single press (regardless of mode) cycles through high, medium and low.

Theoretically, the lens delivers a 180-degree beam, while the connection between back and mount angles the light at a slant. 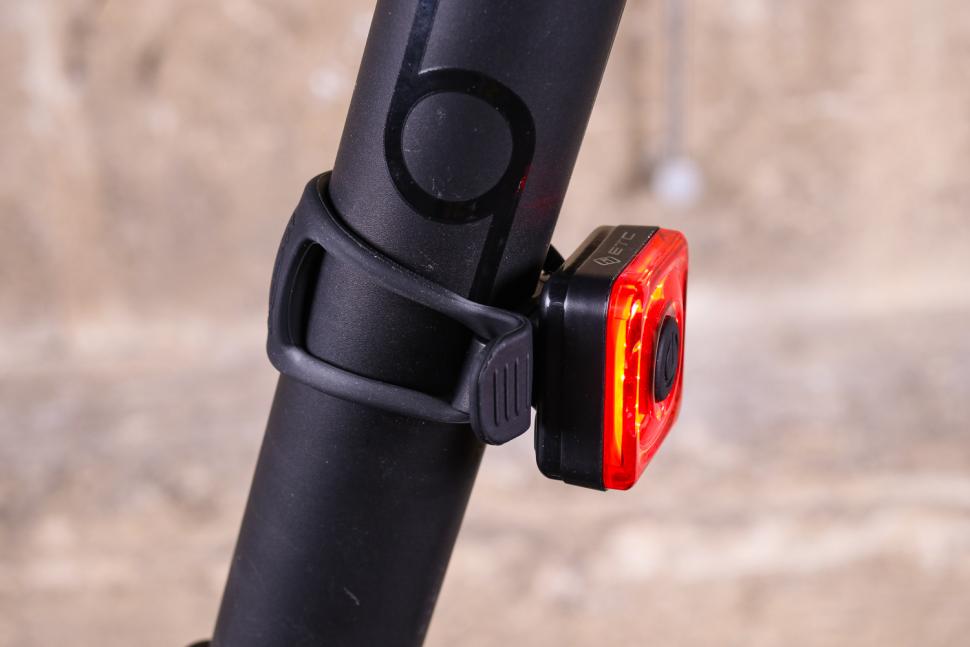 The simple yet very effective 'ladder' type mount is designed to accommodate seatposts between 31.8 and 25.4mm. Pencil-thin seatstays are non-starters. I've also managed to achieve leech-like tenure to some helmets and luggage. However, you'll need to mount it to lids upside down, otherwise the beam will be projected skywards.

A moot point thus far, but other ladder patterns also seem compatible should you lose the original.

There are nine settings to choose from: high, medium and low, with three modes for each – constant, flashing and pulsing.

The brightest 20-lumen mode isn't quite a daylight mode on bright, sunny rides, but when it's been overcast, friends reckoned they could pick the light out from 30-40 metres (pulsing and flashing).

At dusk, and along semi-rural and rural roads, we're talking 70 metres – closer to 100 on a clear to moderate night.

Around 10 or possibly 15 lumens is as bright as suburban stretches generally call for. In my experience, distinctive patterns are more significant than firepower per se. Medium seems the sweet spot through the suburbs and semi-rural contexts.

Again, friends driving cars reckoned I appeared on their radar at 40 metres, although consensus suggests the relatively flat profile is peripherally poor compared with dome-shaped lenses, despite the 180-degree beam projection. Used as my only source of rear light, this was quite apparent, particularly when tackling roundabouts.

Otherwise, medium is assertive rather than aggressive, so shouldn't prove retina-tickling at close quarters or in slow-moving traffic.

However, it is a bit overkill for town centres. Low is a better bet, striking a good balance of power and economy, and holds its own despite competing illuminations. It's also bang on for group rides, where there's safety in numbers and anything too bright risks chastisement/ostracism.

Run solo, flashing is where it's at, although I've found pulsing quite useful when combined with a steady, dynamo-powered light on longer night rides. Low flashing combined with a steady 15 or 20-lumen main light proved a good contrast, conserving more juice while still keeping me suitably conspicuous. Even when the Mira was seatstay-mounted, the combination was obvious at around 35 metres, further on very clear nights.

Riding at rush hour, I've switched the Mira to my helmet. Running it on medium flash and leaving the larger, bike-mounted counterpart in steady proved very effective, particularly when tackling roundabouts or joining the flow of traffic.

The lowest pulsing mode also sips reserves, which is great for touring and endurance events, and when paired with a dynamo – particularly those with a charge port. Talking of which...

Charging is via the ubiquitous micro-USB cable. From the mains, it'll go from flat to full in the 1.5 hours cited – add another 15-20 minutes if fuelling from 5V accessory ports/laptops and so on. Either way, charging is refreshingly swift. 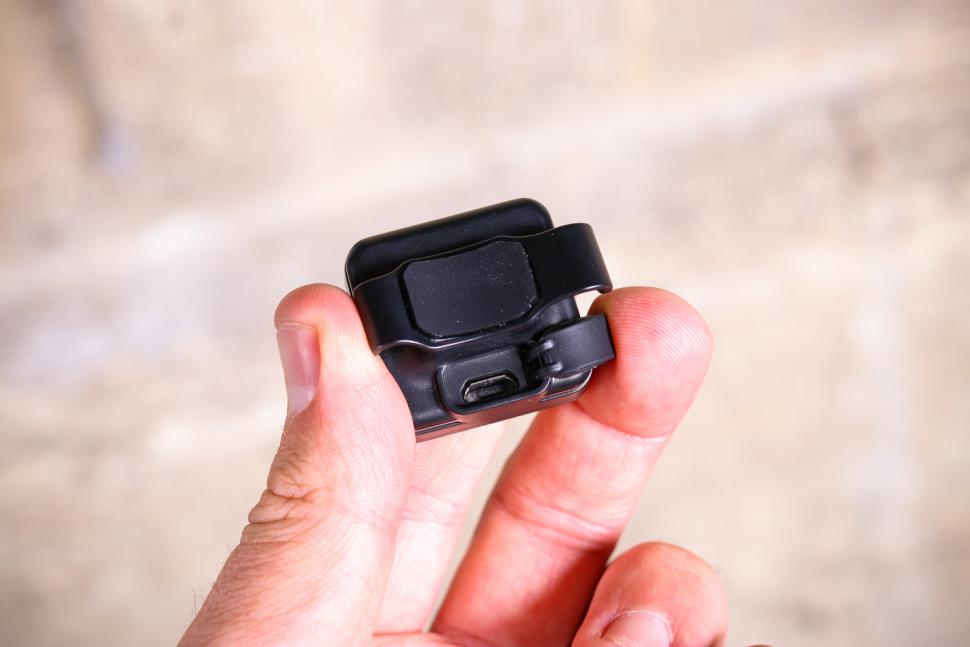 Fully juiced, the 3.7V 500mA lithium-ion cell is reckoned to offer between 1.4 and 21.7 hours. These days, most seem pretty faithful to manufacturer cited times, allowing for battery degeneration, extremes of temperature and so on. Ours has returned 1hr 12mins (3 minutes shy of the cited time) in the highest steady mode; medium flashing has returned just under 8 hours from a full charge, and low gave over 21 hours. That's pretty frugal, and practical enough for most commuting/general riding needs – especially given the quick charging times.

My one minor gripe in this respect is that the ETC doesn't give any visual clues, such as an intermittent flash, when reserves drop to a certain point. It will simply switch off.

Gnerally, build quality is above average.

In terms of weather resistance we're talking IPX5: 'Survive small water jets projected by a 6.3mm nozzle at any angle. The testing lasts for 15min and the volume of water is 12.5 l/min.' Essentially, fine for road riding, especially with mudguards.

Ours has survived torrential downpours and close-range ticklings from the garden hose without missing a beat. That said, its charge port cover wasn't the most precise fit, so I treated it to a precautionary lick of silicone grease.

Prices have been falling and performance rising in recent years, and competition is stiff. Oxford's Ultratorch Slimline R50 Rear Led boasts a maximum of 50 lumens for £17.99. I've used the Oxford for extended periods and would rate it above the Mira if you needed a single rear light that covered most bases.

I've also had good longterm experiences with Moon's Gemini rear light. Admittedly, it's a little dearer at £18.99, but I've found the peripheral bite better than the Mira around town.

Moon's Alcor rear light comes in at £15.99 and looks as if it will give the Mira a good run for your hard earned.

The ETC Mira is a good compact contingency light for when dusk can suddenly strike, or as a companion to a dynamo/dome type blinkie. It lacks the dome type's peripheral punch, though, so wouldn't be my sole rear light.

Powerful enough and frugal rear light, but best as a contingency/secondary unit

ETC is very matter of fact, going straight to the specification. In my view, it's a very bright, compact rear light. However, peripheral punch is less potent, so wouldn't be my only source of rear lighting for regular night riding.

Fairly solid. The charge port cover wasn't the most precise fit, so benefited from a lick of silicone grease. Otherwise, no problems with the elements to date.

Simple centre-mounted switch just the right side of positive. Easily operated wearing full finger gloves but hasn't powered up in a pocket, or wedge pack.

Simple ladder type design with enough scope to cater for seatposts between 25.4 and 31.8mm. It will also entertain some seatstays and other patterns of strap, too.

It's rated IPX5 and had no problems with very wet, silty roads and heavy rain. Left in situ while rinsing bikes down, there's been no obvious sign of ingress. That said, the charge port cover wasn't the most precise fit, so I gave it a quick lick of silicone grease.

Very quick charging and run-times are reasonably favourable, relative to the output.

17g shouldn't ruffle too many feathers.

Certainly above average but there's a lot of choice these days.

As a package, its performance is good: output is strong and from a good distance; modes cater for most contexts; and run and charge times are also favourable. However, peripheral prowess was less impressive; I'd say it's better as a companion to a bigger light if you're doing a lot of night riding.

Bright, relative to size and from behind. Quick charging and favourable run-times.

Peripheral light was underwhelming, a memory function would be useful, and there's not much warning when reserves dwindle.

By no means expensive, relative to the specification, but there's a lot of choice – especially if you were seeking a single rear light. Oxford's Ultratorch Slimline R50 boasts a maximum of 50 lumens for £17.99; Moon's Gemini is a little pricier at £18.99 and its Alcor rear light comes in at £15.99.

Would you consider buying the light? Yes, but as a contingency light on the best bike or backing singer to larger, dome lens design.

Would you recommend the light to a friend? Yes, in the above contexts.

An inexpensive and relatively bright compact light with a lot going for it. However, peripheral prowess isn't good enough that I would want to rely on it as my main rear light. It's much better as a backing singer to a dynamo or LED with larger surface area. 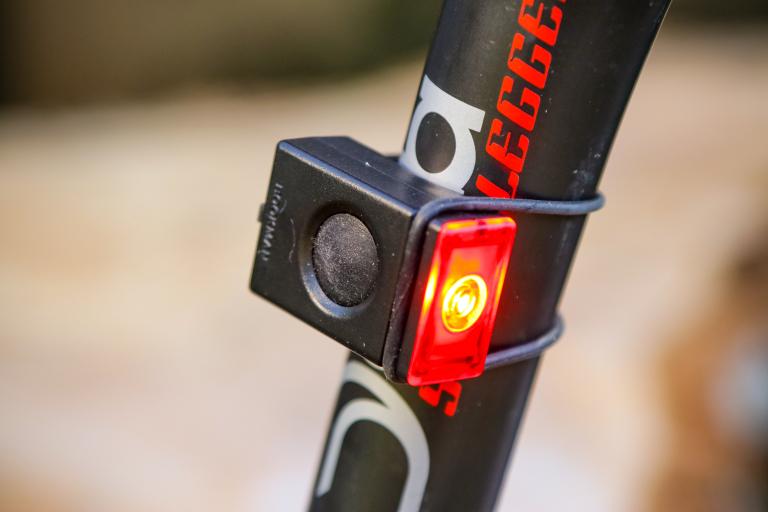 Good side visibility, but not as sleek or as bright as some