7
10
Plenty of brightness and eye-catching modes for day and night use, for a decent price
Weight:
61g
Contact:
www.upgradebikes.co.uk
How we test

Redesigned for 2019/20, the Lezyne Strip Drive 150 Rear covers every eventuality with a huge array of modes and outputs that are bright enough for use on a sunny day as well as the dark depths of winter. It's certainly eye-catching, though sometimes it's better to have a little less choice.

The modes are split into three 'sections', constant, flash and day flash.

There are three constant modes: Blast (45lm/2hr15), Enduro (15lm/7hr), and Economy (3lm/30hr). Blast gives you plenty of visibility in the dark out in the back lanes and in an urban environment too, when battling against the sea of light from other vehicles and streetlamps.

Enduro does a decent job if you want a solid-state light with decent battery life, but Economy could be culled as, at 3 lumens, it is just a glow.

The six flash modes use the LEDs in various flashing patterns so they do grab more attention than their lumen output would have you think, which is just as well. For night usage I like something like the Exposure Blaze with its 80-lumen max output.

Flash 1 on the Lezyne is the brightest, offering 25 lumens and a run-time of 8hrs which it achieved easily as I got between 8:05 and 8:15 consistently. Rather than having various LEDs flashing in sequence to get you noticed, Flash 1 uses all five together in a more traditional on/off flash which is less distracting for drivers when on dark roads. That 25-lumen setting puts out plenty of light for you to be seen by, plus there is a decent pool of illumination on the road behind you.

The next brightest is Flash 4 at 20 lumens (10hrs), which puts out quite a distinctive light pattern. Other than those two, and the 5-lumen Flash 5, which will get you home in an emergency with its 29-hour burn time, I didn't really find that I used the others much at all, with their outputs putting them at bright enough without really standing out.

The two day flash modes, though, are very noticeable. Day Flash 1 delivers 150 lumens (6hrs 30mins) and Day Flash 2 offers 100 lumens for 7 hours, both with attention-grabbing flashes and a super-bright pulse every third or fourth flash.

They are too bright to use in the dark as they'd be too distracting to following drivers, especially out in the sticks, but you should be seen from a fair distance even on a sunny day.

When it comes to charging, the Strip Drive is definitely a light designed for commuter use. Remove the rubber cover at the bottom and you'll find a USB that'll plug directly into your PC or USB-equipped socket/plug and the light will go from flat to full in just two hours. 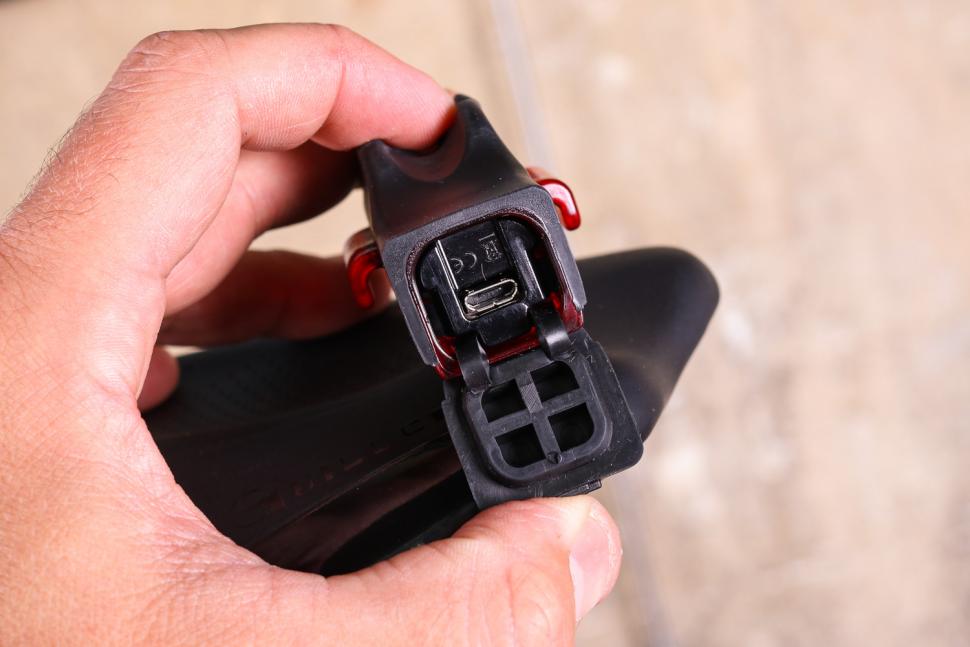 That rubber cover fits snug as well, which keeps the rain out. Riding without mudguards sees a lot of spray chucked up over the light, but prolonged rides in heavy downpours saw no issues with water getting in or around the USB point.

With a lot of road bikes coming with aero seatposts these days, it's good to see Lezyne has incorporated a mount with flexible rubber that moulds around any seatpost to deal with all options. In fact I would say that it works better on aero posts than it does on large diameter round ones as it can slip round slightly when the road is rough. You just need to glance back occasionally and give it a nudge if needs be.

At £35 it's not a bad price, especially when you compare it to something like the Knog Cobber Mid Rear Light.

The outputs are about the same – the Knog is 170 lumens – and the burn times are pretty similar, but the Knog will cost you £59.99. It does have some cool flashing modes, though.

The Niterider Omega 300 rear light has double the output for an extra 20 quid, which looks great on paper but I did have some issues with keeping the water out.

Overall, the Strip Drive 150 is a good light for the money. I'd cull some of the low power modes to make things quicker to scroll through, and the mount isn't the best for keeping the light straight on round posts, but when it comes to performance there is little to fault.

Plenty of brightness and eye-catching modes for day and night use, for a decent price

Lezyne says, "Redesigned for our Year 13 collection, the Strip Drive Rear features our new Wide Angle Optics lens that provides up to 270° of visibility. It also features an increase of 27 hours in runtime for a maximum of 57 hours. Its co-molded construction is more compact, but still boasts five LEDs for up to 150 lumens of output. With 11 output modes, including a Daytime Flash mode, it's got options for any time day or night. A versatile mounting system attaches to aero or round posts and it's micro-USB rechargeable."

A decent light that balances output versus battery life.

Simple to turn on and scroll through the modes.

It can spin round on round seatposts.

The rubber cover keeps the rain and road spray out.

For me it works best as a daytime flashing light.

Stands up well against the elements.

Too many similarly powered modes.

It is priced pretty competitively, with brands like Knog offering similar outputs and run-times for an extra £20 or so.

A few little niggles like the mount and the sheer number of modes, but it performs well and stands up to the weather.