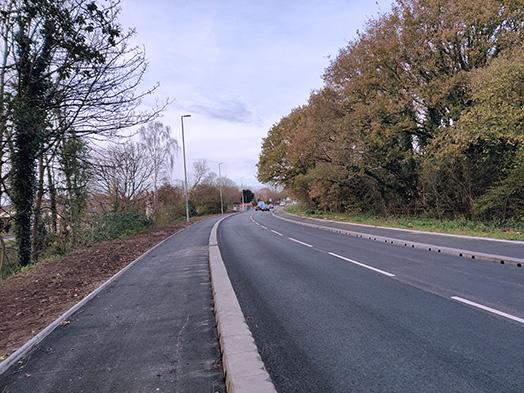 Website’s coverage of rider cycling next to unfinished cycleway also incorrectly suggested it cost £150 million – when in fact it was £1.12 million
by Simon_MacMichael

MailOnline and its readers have had a collective meltdown after footage shot by a car passenger showed a cyclist riding on the main carriageway of a road in Bournemouth, as he is entitled to do by law, next to a cycleway that is still under construction.

The newspaper also originally claimed – wrongly – that the facility, on the A347 Whitelegg Way, is a “£150m cycle lane scheme” when in fact it is just one aspect of a £102 million initiative aimed at encouraging sustainable travel, including by public transport.

The headline to its article yesterday said, “Motorists' fury as cyclists IGNORE £150m cycle lane scheme in Bournemouth and pedal along the road – forcing drivers into oncoming traffic.”

That figure has now been quietly corrected to £1.12 million... still, what’s £148.8 million between friends?

Meanwhile, Bournemouth, Christchurch and Poole (BCP) Council has said that the cycleway may have been blocked by barriers that had been blown over by the wind, and that parts of it are still being construction and permanent signage is not yet in place.

The car passenger, quoted in the MailOnline article, said: “I just couldn't believe it – the situation definitely had me swearing a bit. It’s infuriating.

“The road is already narrow with no room for drivers to let emergency vehicles pass and you have this cyclist ignoring the designated lane.

“There were four to five cars in front of me and they were having to avoid the cyclist as well as oncoming traffic.

“Some people have said that parts of the cycle way is still unfinished but it was definitely open and safe to use.

“My frustration is with the local council for the money spent on these cycle lanes when the whole infrastructure of the town needs urgent attention.

“The whole of Bournemouth is turning into cycle lanes and there's no room for cars anymore. I hardly ever see cyclists in the bike lane.

“It's hard enough for the emergency services as it is without the roads being like this,” she added. “The council just doesn't seem to listen to the public.”

That claim is incorrect. In fact, BCP Council held a public consultation on the proposals, which were viewed by 27,000 people with 2,500 completing surveys.

As far as Whitelegg Way is concerned, 56 per cent of respondents backed the proposals, with 44 per cent opposed, according to a report published by the council.

One potential reason for the cyclist taking to the main carriageway – perfectly legally, since there is no obligation for bike riders to use cycle lanes where they are provided – can clearly be seen in the video, with the path partially blocked by barriers.

A spokesperson for BCP Council told MailOnline: “We don't know why the cyclist chose to ride on the road rather than use the cycleway along Whitelegg Way.

“Road work barriers blew over during the Christmas period obstructing sections of the cycleway so this may have been the reason; they have now been cleared.

“The sustainable travel improvements along Whitelegg Way are still under construction and permanent cycle route signage has not yet been installed.

“Cyclists may not be aware that the cycle lane is now open. We will review the temporary signage in place to ensure it is clear that the lane is operational.”

The spokesperson continued: “One of the biggest concerns stopping people from cycling is their safety when using busy roads. Evidence shows that people will use bike infrastructure once it is built.

“A study found that in cities where bike infrastructure was added, cycling increased up to 48 per cent more than in cities that did not add bike lanes.

“Whilst there is no legal obligation for people to use cycle lanes, they are separated from traffic and therefore much safer for people cycling rather than using the same lane as traffic.

“We encourage people to use cycle lanes wherever possible and follow the Highway Code rules for cyclists. We will be carrying out campaigns around road user and cycle lane etiquette in due course, once the works along the route are complete.

“The Transforming Cities Fund investment in infrastructure on Whitelegg Way should not be viewed in isolation – it is the first section of a 13km walking, cycling and public transport route that will link north Poole with Christchurch, providing residents with more choice on how to travel to work, education and local amenities, as well as easing road congestion and improving air quality.

“Once the entire route is constructed then the benefits of the Whitelegg Way section will be fully realised.”

Regarding claims that the new road layout impeded the emergency services, they said: “The carriageway on Whitelegg Way is between 6.4m and 6.6m wide, adhering to current national standards set by the Department for Transport.

“It is able to be used safely by all vehicles, including emergency services vehicles, and has undergone, and will continue to undergo, a number of independent road safety audits.

“The Transforming Cities Fund programme team are working with the emergency vehicle operators and have not received any objections about Whitelegg Way.

BCP Council and Dorset Council were awarded £79 million in March 2020 from the Department for Transport’s Transforming Cities Fund for the South East Dorset City Region, with additional funding from other sources bringing the total to £102 million.

The money from central government was provided under Tranche 2 of the TCF, as part of the final allocation of funding to local authorities under the initiative.

While building a 78km network of six high-quality segregated cycling and walking routes does form an important part of the plan, that certainly does not account for all of the money.

Other aspects of the successful bid for the South Dorset City Region include improved network management (eg bus priority at key traffic signal locations, and an HGV traffic management system at Longham Bridge to help avoid bridge strikes), plus improvements to bus interchanges and bus infrastructure, as well as smart ticketing and improved facilities including cycle parking at local schools.