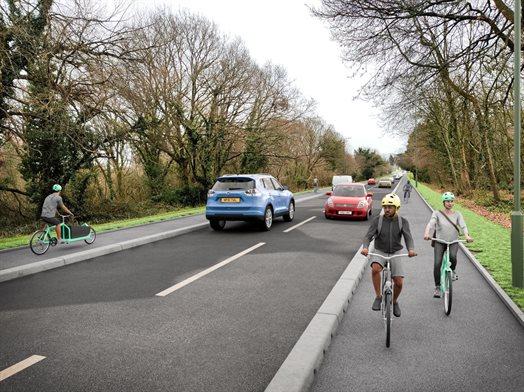 A Bournemouth-based active travel group has accused a local councillor of “stirring resentment” after he criticised the installation of new segregated cycle lanes in the coastal town.

An 850 metre protected cycle lane is currently being installed along both sides of Whitelegg Way between the Redhill and Northbourne roundabouts. The work, which also includes resurfacing of the carriageway and the installation of new walking paths, crossing points and bus stops, is due to be completed in March 2022 and forms part of a new 13km sustainable travel route between Merley, Poole and Christchurch.

Despite the broad public support for the proposals during the formal consultation process earlier this year, a handful of local residents have criticised the council’s decision to narrow the carriageway to allow for the cycle lanes, as well as the new six inch kerbs designed to segregate traffic and protect cyclists using the paths.

Last month, the Bournemouth Echo spoke to a firefighter who claimed that the segregated lanes slowed the progress of emergency vehicles on the road by minutes, while a local woman said that she felt “rather claustrophobic” and “hemmed in” by the kerbs.

Stephen Bartlett, an independent councillor for Redhill and Northbourne, told the Echo that “the new cycle lanes are a great example of how to waste millions of pounds of taxpayers' money.

“We now have problems that are entirely self-inflicted. I think it will hold up emergency vehicles and it could be a serious issue as the road is part of a main route to the hospital.”

However, a spokesperson for Bournemouth, Christchurch & Poole Council said that they work closely with emergency vehicle operators and have so far not received any complaints about Whitelegg Way, saying that “it is not necessary to mount the kerb and we would not advise any vehicle to do this.

“The carriageway on Whitelegg Way is between 6.4m and 6.6m wide, adhering to current national standards set by the DfT. It is able to be used safely by all vehicles, including emergency services vehicles, and has undergone, and will continue to undergo, a number of independent road safety audits.”

BH Active Travel, an independent community group, pointed out that new route was an important link for commuters to travel in and out of the town centre.

“The DfT approve and monitor all these schemes, built to current government standards”, a spokesperson for the group told road.cc.

“It’s concerning how ward councillors seem to know more about planning than the trained engineers that design and install them, helping to stir resentment in such an important period of transport shift rather than focus on facts.

“Emergency services are consulted prior to any builds and are encouraged to feed back – again, if a proposed bike lane will reduce road widths below new standards – they’re simply not built.

“Even from the [Echo] article pictures you can clearly see that if both sides of traffic move (as they are meant to) there is ample space for emergency services without mounting the kerb. Further to this, the kerb on the adjacent side is not at extra height, so drivers ‘could’ mount this easily if they felt they needed to.

“We do of course sympathise with car drivers who feel ‘rather claustrophobic’ in their one tonne sofa-carrying steel boxes. Luckily, for those who are able there’s now a very safe lane they can use to alleviate this.”

The row in Bournemouth – manufactured or otherwise – follows a similar dispute in nearby Poole last month, when drivers claimed (incorrectly) that because of the new bike lanes, cyclists now had more space on the road than they did.

On Monday Simon Brew, a Conservative councillor in Croydon who sat on the council’s Cycle Forum, also criticised the implementation of new segregated bike paths on the Brighton Road.

“The more space you allocate to one form of transport,” Brew argued, “the less is available to other forms, which means that cars, for example, can't veer into the cycle lane to avoid a crash, or a pedestrian in the road.”