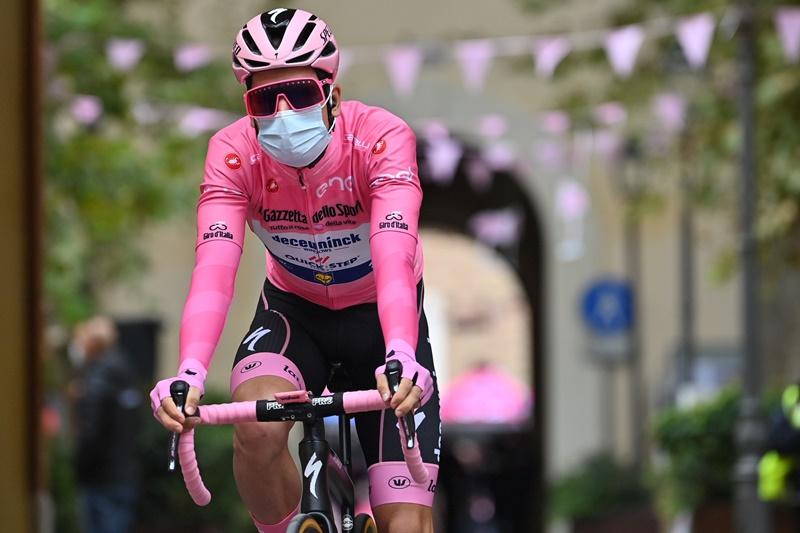 UCI president David Lappartient has said that, “cycling still has the situation under control,” amid growing concerns about the spread of Covid-19 at the Giro d’Italia. EF Pro Cycling boss Jonathan Vaughters said that the sport’s governing body didn’t take his team’s suggestion that the race be shortened to two weeks seriously in the wake of a series of positive tests.

His team, Mitchelton-Scott, subsequently pulled out of the race entirely after four members of staff returned positive results on the first rest day, while Jumbo-Visma also withdrew after a positive test for team leader, Steven Kruijswijk.

Yesterday it was reported that 17 police officers covering the e-bike event that runs alongside the Giro had tested positive for Covid-19.

A spokesperson for organisers RCS Sport said that the officers in question had been, “exclusively engaged in the escort at the Giro-E, an event with organisation, logistics, hotels, timetables and starting locations completely separate from those of the Giro d’Italia.”

That explanation didn’t wash with everyone with Lotto-Soudal’s Thomas de Gendt expressing his suspicion that, “the organisation is hiding things and giving it a twist.”

EF Pro Cycling was sufficiently concerned that it wrote to the UCI proposing that the Giro be called to a halt on Sunday, at the end of the second week, because of "a clearly compromised bubble."

Referring to an early finish and alluding to the earlier withdrawals of Mitchelton-Scott and Jumbo-Visma, the letter said that, “it would be better for the Giro and the UCI World Tour…(if) this be done in a systematic, holistic way versus a chaotic withdrawal on a team by team basis.”

The UCI denied the request and said there would be additional general screening of teams yesterday and today, on top of the testing due on the second rest day (Monday).

Regarding the continuation of the Giro – and start of the Vuelta on Tuesday – Lappartient told Het Nieuwsblad: "Cycling still has the situation under control: in the Tour there were four positive tests out of 2,800 tests carried out. At the Giro, there have been three riders who have tested positive for the coronavirus out of 176 starters.”

Seemingly overlooking the frequency of testing at the race, he continued: "These are percentages that are much lower than in the rest of society: in France there are regions where 17 per cent of the tests are now positive.

"The efforts that cycling has been taking have been paying off. But we must not let go; the danger is still there. If we want the Vuelta to take place, we'll have to make the protocols even stricter, as Spain has been hit even harder than Italy."

Vaughters told Cycling News he was unimpressed with the UCI response to his team’s suggestion that the race be shortened by a week.

Commenting on the testing results on the first rest day, he continued: “It was a total positive rate of around two per cent, which could – if not necessarily – mean the bubble has pierced.

“Our medical director said, ‘well, if there are 11 positives, there could be greater spread going on, so it would probably be a good idea to suggest we figure out an organised early departure from the race.’

"That doesn’t mean our team is just going to pull out unilaterally. It means we’re just asking all the other teams and RCS to come up with maybe an alternative race finish date to be able to finish up the race in an organised and honourable way, as opposed to something more chaotic – having two or three teams leaving and others staying.

"We’d rather have it as a more collaborative process. They may not take that suggestion, and that’s fine, but we felt it was our obligation to at least suggest it."