It's Thursday and Dan Alexander will be keeping you up-to-date with the best bits from the cycling world on the live blog... 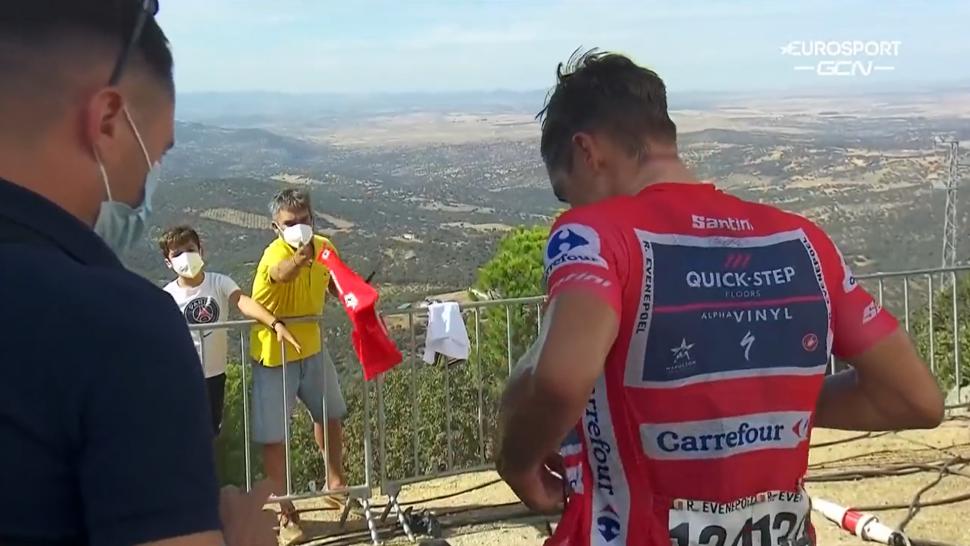 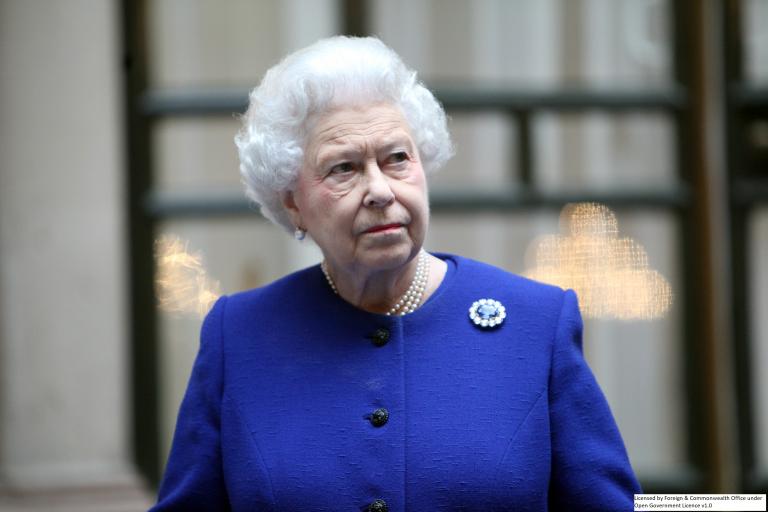 Heartbreak for Robert Gesink caught within sight of the line...

Enric Mas lit up the stage but had little left for the sprint although he does tighten his grip on second place. Carlos Rodríguez had a tough day on, or should I say off, the bike, losing plenty of skin before losing time and dropping to fifth behind Miguel Ángel López...

🇪🇸 Carlos Rodriguez was involved in a crash at the beginning of the stage. Doesn't look good, but he's still on the bike. Hopefully he'll be able to protect his 4th place in GC later on today...#DomestiqueLive pic.twitter.com/VVw6ycLpgW 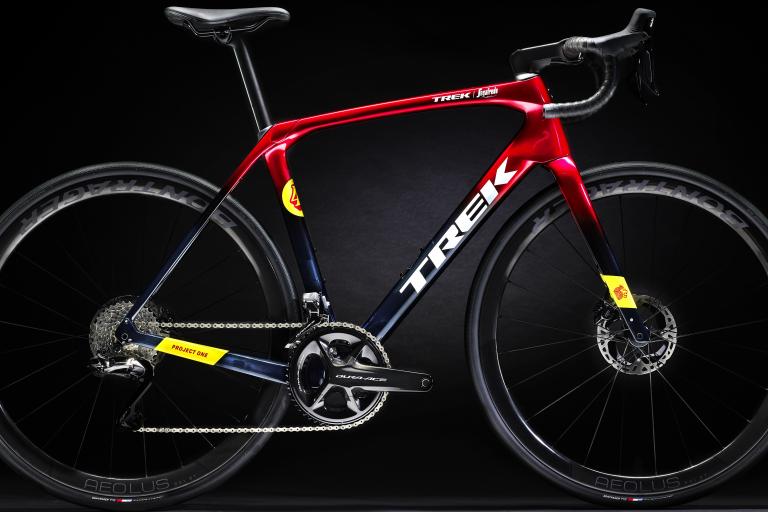 Trek claims the fourth generation Domane is faster and more capable than ever before, and the frameset is 300g lighter than the previous version
22
08 September 2022, 14:43
Jordi Meeus sprints to victory on Tour of Britain stage five

Winner of the bunch sprint in Sunderland, after the breakaway had crossed the line victorious, Jordi Meeus finally got his Tour of Britain stage win. Stanisław Aniołkowski sped up the inside to second while on the other side of fourth-placed Samuel Watson, Tom Pidcock threw his bike to third, taking some cheeky bonus seconds and moving closer to the race lead in the process.

The finish was somewhat overshadowed by a blunder which saw half the field on the wrong side of the barriers, unable to rejoin the sprint as they raced towards the line in Mansfield... 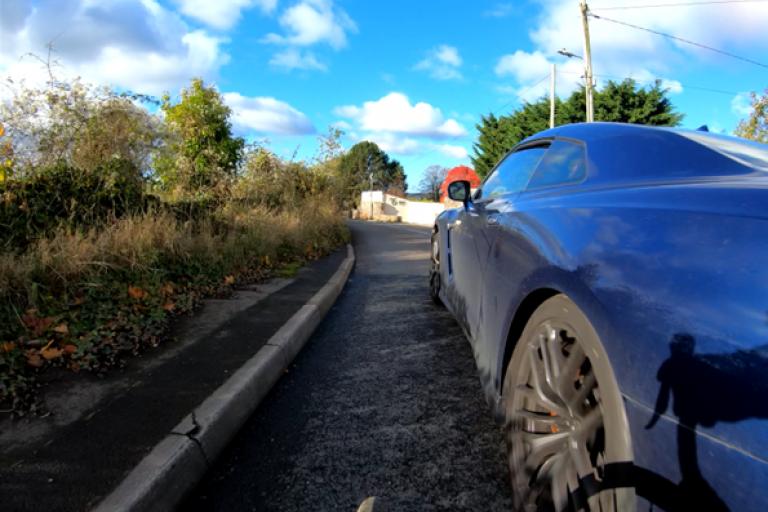 Near Miss of the Day 821: Close pass driver fined for careless driving – but should the charge have been dangerous driving?

Our regular series featuring close passes from around the country - today it's Avon & Somerset
21
08 September 2022, 13:52
Concerns for Queen's health

Well, there's something quite a bit bigger than cycling unfolding this afternoon. Fair enough if your live blog scrolling has gone elsewhere...

Concerns are being expressed across the country for HM The Queen following announcement by Buckingham Palace that she is under medical supervision at Balmoral where members of the royal family including the Prince of Wales have travelled today.

Best wishes from all at road.cc, of course.

08 September 2022, 13:26
"Whilst it would have been better to have scribbled on the jersey and posed for a selfie you have to draw the line somewhere": More reader Remco reaction

MattieKempy said: "Re. Remco. He has form which suggests he's a bit of a prima donna (the  incident at last year's Worlds where he apparently did his own thing despite the agreed team tactics and then sounded off about it later). It's all very well to suggest that he's entitled to warm down in peace and in some respects he is, but he and others also need to acknowledge that he wouldn't be riding a bike professionally if it weren't for the fans that were pestering him! The shirt-thrower was 5m away so it's hardly like he could have asked politely and handed the shirt courteously to Remco."

However, PRSboy commented: "Athletes need somewhere they can go for privacy and recovery, and it looks like this was a cool-down zone. Whilst it would have been better in the scheme of things from a PR point of view for him just to have scribbled on the jersey and posed for a selfie you have to draw the line somewhere.

"I can imagine after a Grand Tour stage you would be barely capable of coherent thought."

After a Grand Tour stage? I'm barely capable of coherent thought after 11am...

You heard it here first!

Nice to see @tompidcock getting into the spirit in Nottingham ahead of stage five at the #TourOfBritain pic.twitter.com/EhunnkOZei 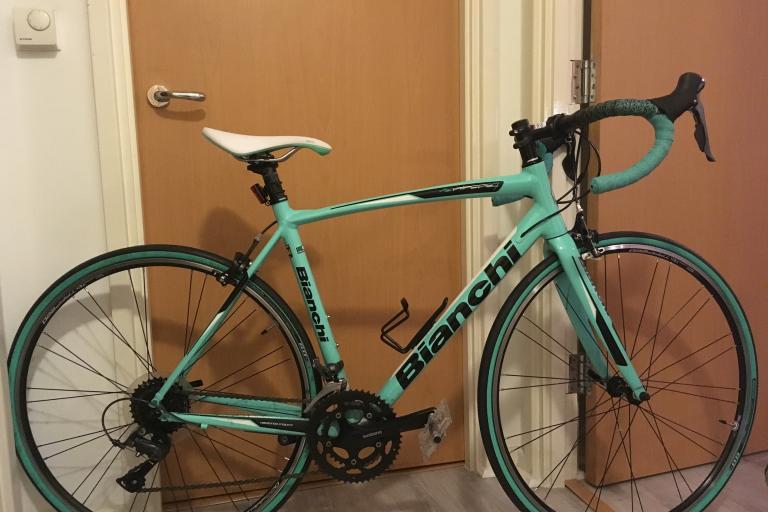 Cyclist who spotted her stolen bike outside police station gets Bianchi back... but has ANOTHER bike stolen 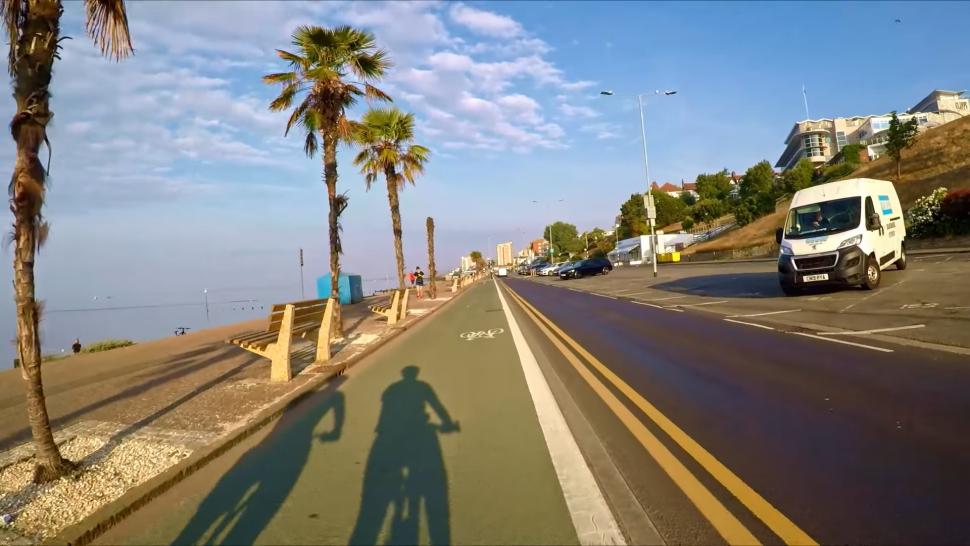 A group of community-spirited cyclists from Southend-on-Sea renovated their favourite bench, giving us a lovely dose of positivity for your Thursday lunchtime... 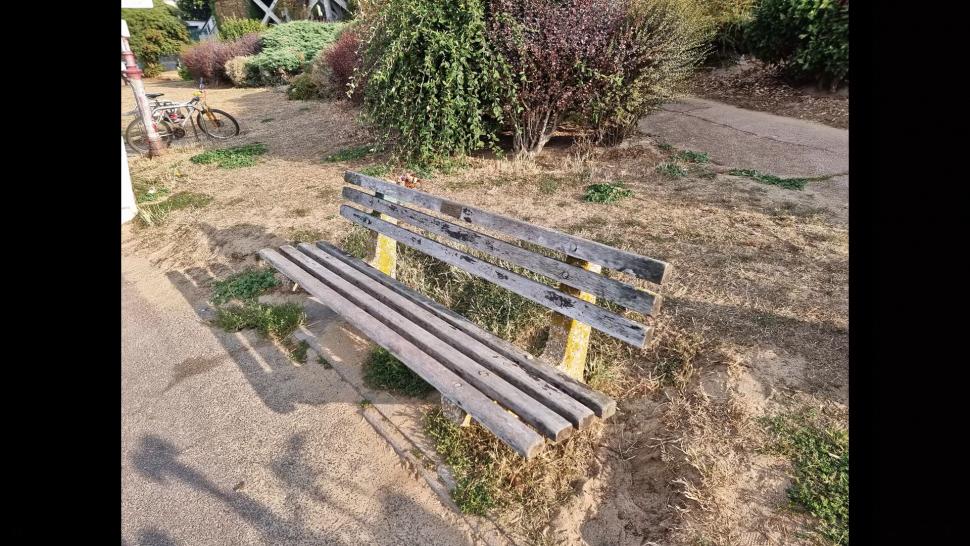 The full video is over on the Piękna strona Wielkiej Brytanii Facebook group, but as it's a closed page it can't be embedded into the blog, so screenshots will have to do... 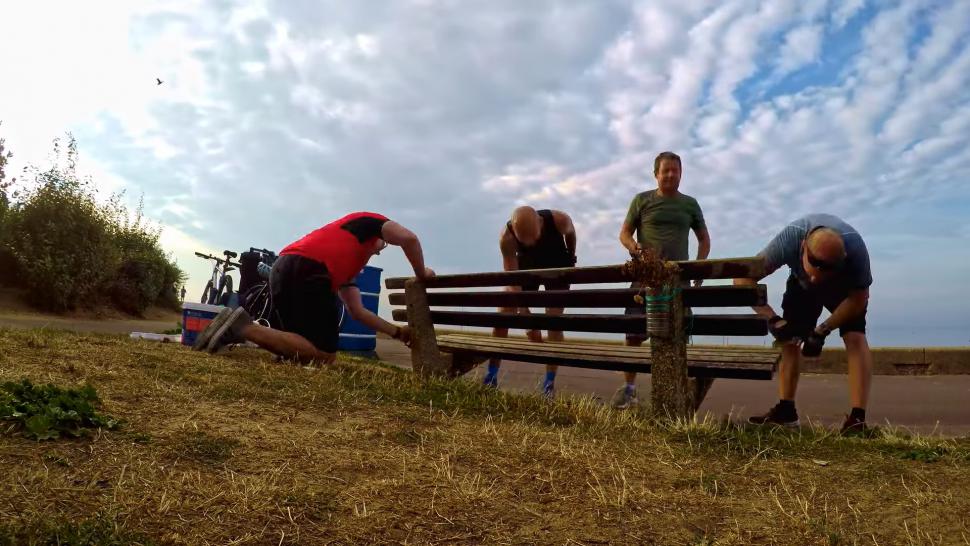 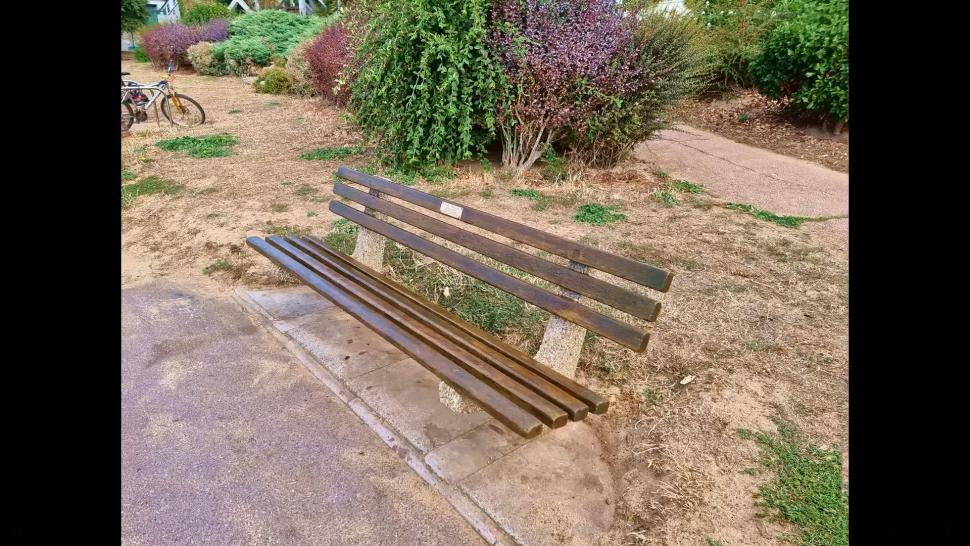 Tough break for the Aussie climber whose abandon means we could have a fight for points on today's double first-category climb stage... did I mention the breakaway's got 40 people in it? Nearly a third of the race...

One of the escapees, Richard Carapaz, is now the virtual leader in the mountains classification, and who'd bet against him making it win number three of the race in a few hours? 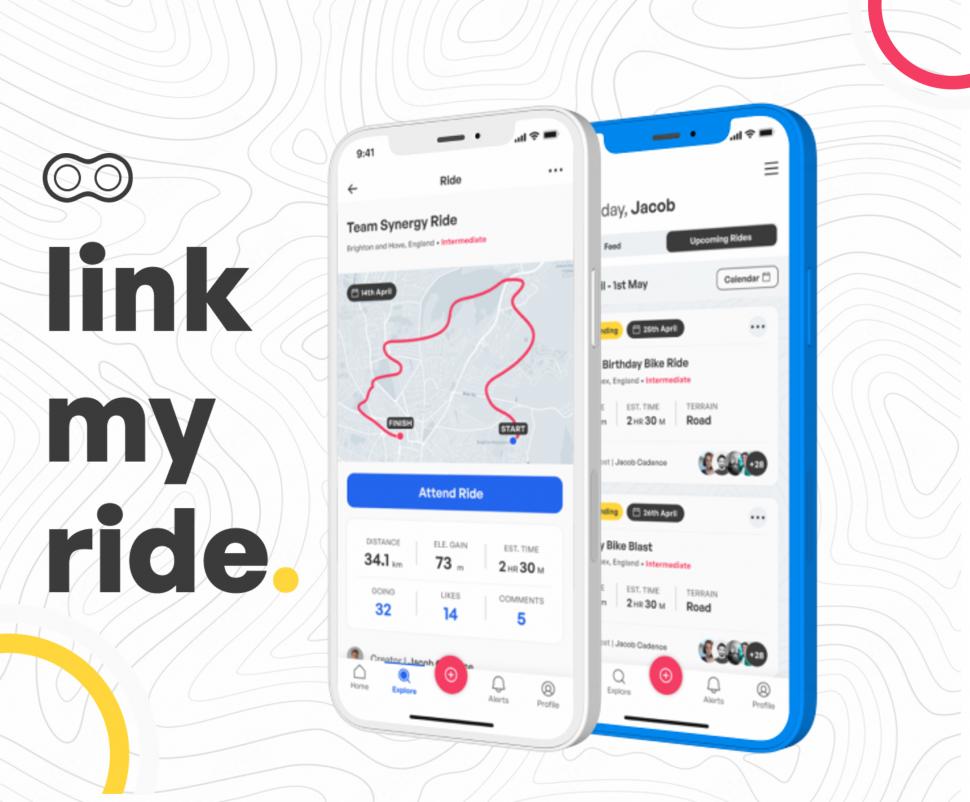 Link My Ride, the app founded by Tom Pidcock, has launched on the App Store and Google Play today. Billed as a pre-ride organisational platform allowing cyclists to plan and create group rides, Link My Ride is also free to use.

Co-creator Jacques Sauvagnargues explained the concept: "Organising group rides, finding local club rides to join or connecting with other individuals to ride with has never had a simple solution. We wanted to create a simple way for any rider to be able to explore, plan and create group rides and make connecting and socialising with other riders a more straightforward and enjoyable experience."

The app is free to use, but also has a tailored clubs portal designed to help clubs manage membership and club rides, which costs £240 per club per year.

"I've been joining club rides and chain gangs since I can remember but the organisation via other apps or social networks has always been lacking. We're really excited to finally bring the Link My Ride app to riders all around the world. We're on a mission to become the only tool cyclists need to connect with other riders, clubs and cycling hubs, at the touch of a button," Pidcock said.

It is incredible how quickly @hackneycouncil can find enforcement for a pedal cycle, but not pavements like this which have been reported many many times! https://t.co/SOh2unrE8h pic.twitter.com/iKgZdCzabi 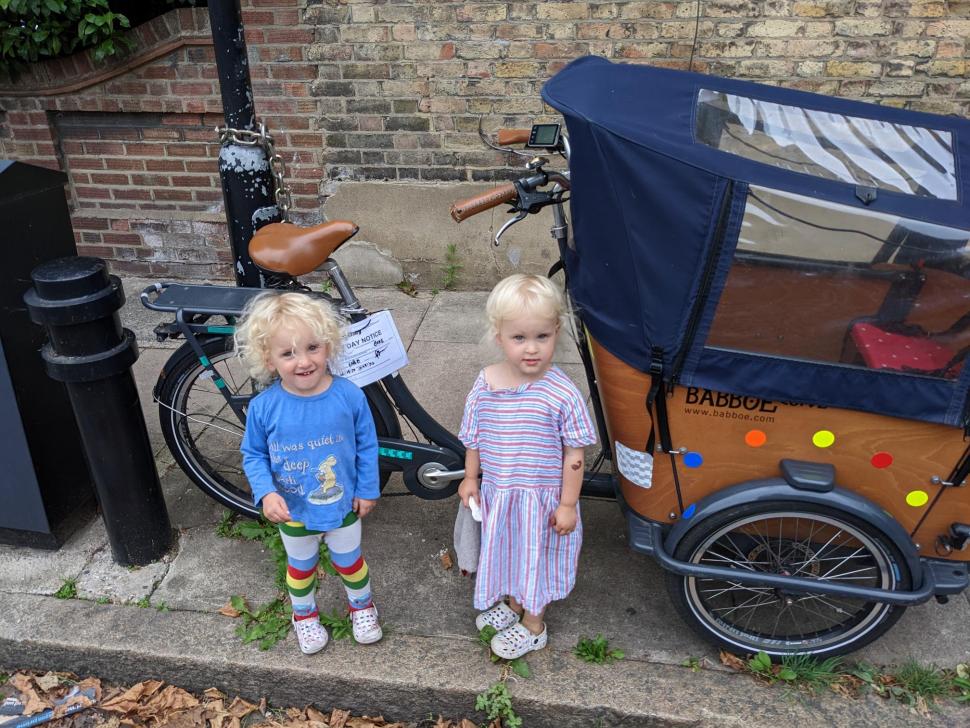 08 September 2022, 09:03
Remco Evenepoel splits opinion after refusing to sign kid's jersey thrown at him by dad

This one's split people down the middle...

Remco appears to shake his head at the kid holding up a red jersey to be signed by the race leader, ignores the man (presumably the boy's father), then looks disdainfully at his soigneur when the jersey is thrown to him, prompting a Quick-Step Alpha Vinyl photographer to hand it back rather more kindly than it was thrown...

One tired rider, one disappointed kid...who's the real victim here?

The Cronoescalada cycling page shared the clip, saying: "Good for Remco denying the photo to the father who harasses him. You have to respect the athlete."

Fans have a sense of entitlement.

I have seen this happen to Cavendish, to Brad Wiggins, in football and cricket and wherever.

There's a way, a time and a place to interact with Sports personalities.

They will do it kindly. But don't force them don't take the piss.

Completely agree here! Fans need to be more respectful. Kid just gave his all in a bike race don’t assume you deserve something from them.

However, not everyone backed the rider, with many pointing out how little effort scribbling a pen would have taken, especially when it will make a child's day and possibly inspire them into a lifelong love for a sport (and, more cynically, your photographer is stood five metres away)...

One fan commented: "The father is weird but the child deserves his signature even if you tell him to wait a moment to recover from the effort."

Another said: "He is a professional and part of his job is to attend to the fans (and more so to future generations). There was only one person and he did not even go to approach. That's why he had to throw the jersey."

Maybe Remco's dehydrated, fatigued and had it up to his Specialized helmet with interviews, doping control and podium ceremonies, maybe he should have just taken ten seconds and signed it in the first place?

What do you reckon?

08 September 2022, 09:56
"He is completely within his rights not to let fans disturb his warm down": Your thoughts on jerseygate

At least the kid wasn't holding up a god-awful cardboard sign...

Here are a couple of your early thoughts on the matter...

Rendel Harris commented: "Remco did seem a bit out of sorts yesterday, it was noticeable directly after the finish that he angrily waved away one of his own team who was trying to take a picture, presumably for their Twitter feed or whatever. However, he is completely within his rights not to let fans disturb his warm down, the dad should have asked once and seeing he got no response given up."

EnjoyTheRide added: "Fully behind Remco in refusing to sign the jersey — the father displayed discourtesy and disrespect in spades by throwing it across in this manner. It's also a terrible, self-entitled lesson to teach a young child. It wouldn't surprise me if the bloke just wanted to stick it on eBay." 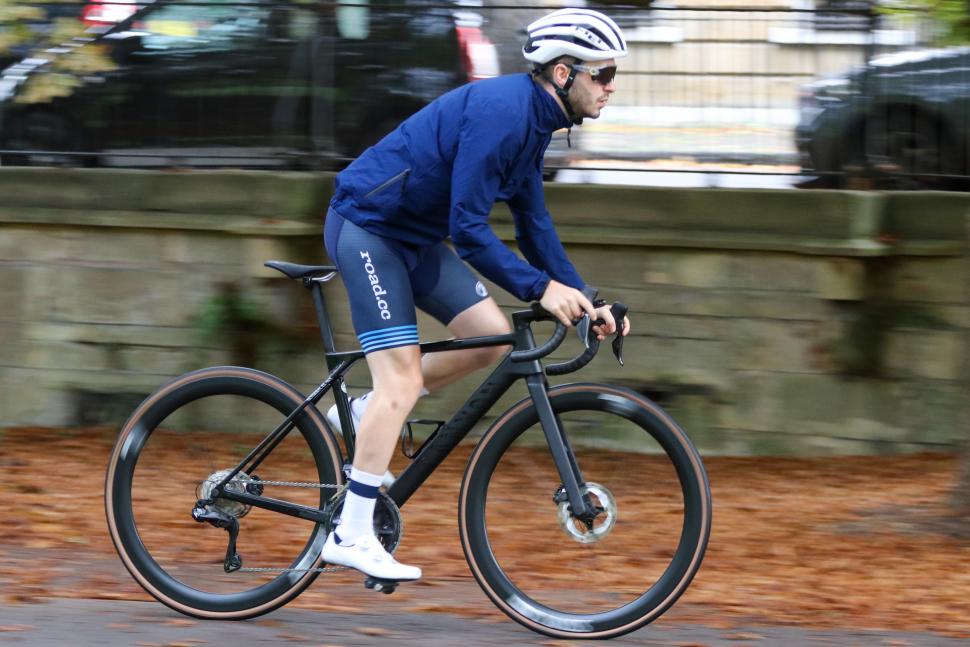 The all new Canyon Ultimate is here, but if we're being honest it's hardly a surprise considering it has been raced by the pros for pretty much all of 2022. Anyway, more important than what it looks like and who rides it are the numbers that have now been released with the official announcement...15 per cent increase in head tube stiffness and a 10 watt saving at 45kph, find out more here...

And for our review, Liam's been out giving it the once, twice, thrice and many more times over to find out exactly how it rides... it's a tough life, eh Liam... 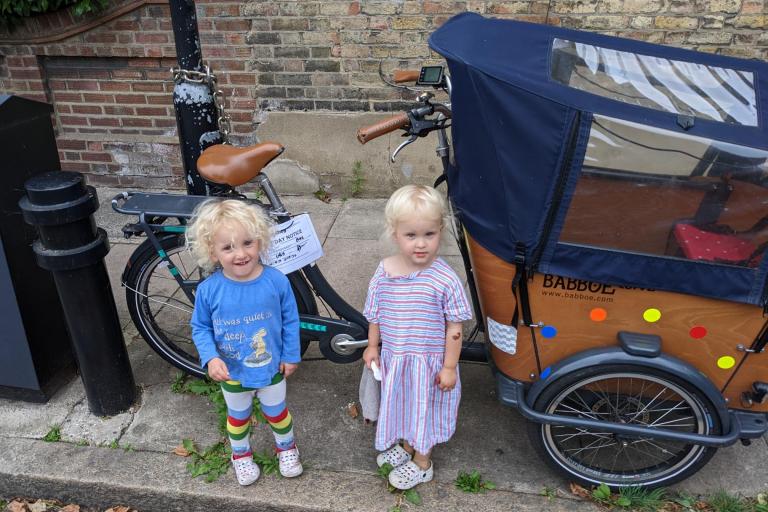 “This case shows the desperate need for cargo bike parking solutions in Hackney… and is another example of the hostile atmosphere towards cyclists,” says Will Prochaska, the bike’s owner
41
08 September 2022, 07:47
Wheelie impressive skills by Tour of Britain rider climbing 20% climb

At the top of Carlton Bank too...

Legs burning, cadence slowing, double-digit grinding and the Uno-X Pro Cycling Team rider still had the skills to pop a quick wheelie for the grateful masses. Amongst the throngs of supporters, was a dinosaur...not an actual dinosaur, of course...just a grown man dressed as one running alongside home hero Tom Pidcock...

The Beefeaters, more commonly spotted on the slopes of Alpe d'Huez, were there too and got a front-row seat for Johannessen's entertaining cameo...