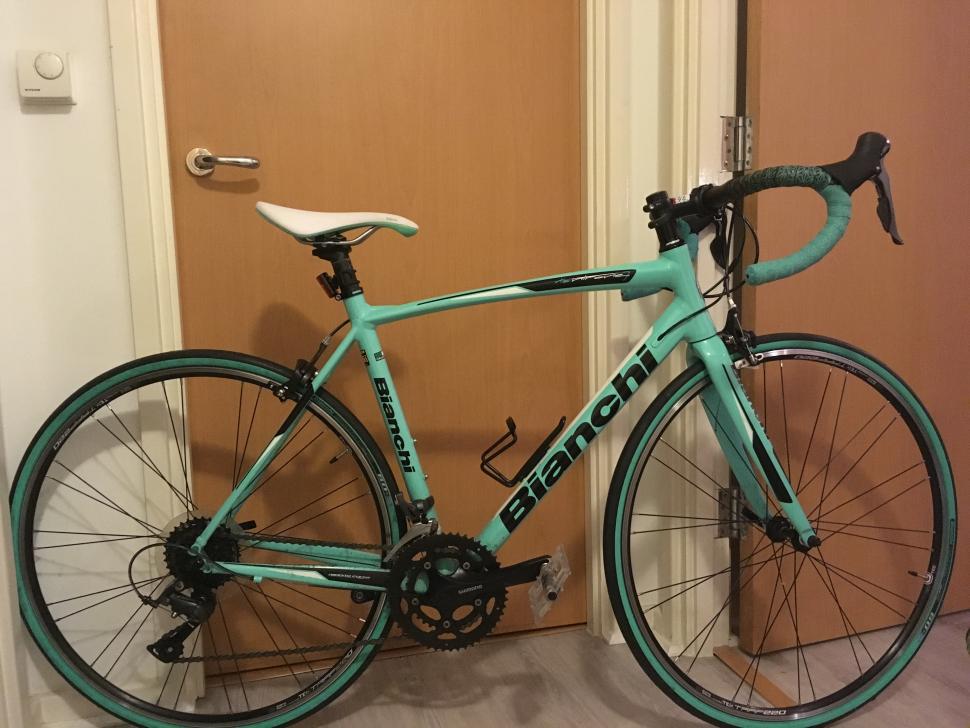 Cyclist who spotted her stolen bike outside police station gets Bianchi back... but has ANOTHER bike stolen

A Bristol woman who was assaulted by a man when she attempted to take her stolen bike from him has been reunited with it, after the owner of a scooter shop bought it suspecting it was one that had been flagged on media as stolen – then got in touch with her to reunite her with it.

> Cyclist spots thief with her stolen bike ... outside police station — then assaulted during confrontation

Two other bikes belonging to her were also taken during that burglary, and subsequently a fourth break-in in a matter of days at the supposedly secure bike storage facility in the building on Bristol’s Harbourside where she lives resulted in another of her bikes being stolen.

One of the three bikes belonging to her that was taken in the original break-in last Wednesday was a Bianchi Via Nirone 7, which she spotted being held by a man outside a police station that is currently closed for refurbishment.

But when she confronted him and tried to take it back, he clung on to the bike, pushed its owner and made off.

Posting to a local cycling page on Facebook, she said she has now got that bike back after it was sold for £120 to the owner of a scooter shop who, believing it was one of the bikes that had been stolen, got in touch with her.

The shop owner, who refused to accept a reward from the cyclist, has also passed CCTV footage showing the suspected thief and accomplices to police.

However, the victim’s attempts to have officers track him down, including by pointing out repeated sightings in the city centre of his associates, and at times with other bikes she believes to have been stolen, have so far proved fruitless.

So too have efforts to have the building’s owners address the security issues there despite four break-ins now in the space of a week in which besides her own four bikes being stolen, other residents too have had their bicycles taken.

The latest burglary of the bike storage unit happened between Monday night and Tuesday morning, according to her post to the Facebook group – with the bike stolen on this occasion being a Liv BeLiv gravel bike with a retro-style step-through frame.

Besides the Bianchi, the other two bikes stolen last week – the day after thieves had first broken into the unit and taken items that were not secured in including lights, pumps and wheels – were a  Whyte Victoria 2012 and a Boardman Comp Fi 2014.