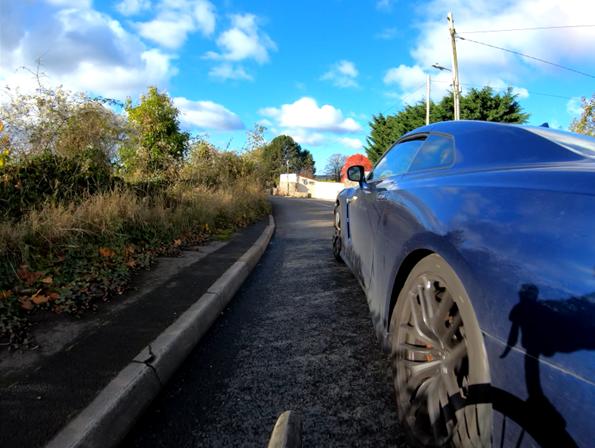 Near Miss of the Day 821: Close pass driver fined for careless driving – but should the charge have been dangerous driving?

Our regular series featuring close passes from around the country - today it's Avon & Somerset...
by Simon_MacMichael

A cyclist who got a close pass at speed from a driver says he is “happy” with the outcome after police investigated the incident, with the motorist having fined almost £400 after admitting driving without due care and attention – although some people commenting on social media have wondered why he was not charged with the more serious offence of dangerous driving.

The incident happened last November with road.cc reader Guy being the cyclist on the receiving end, and Avon & Somerset Police tweeted the outcome of the case, which saw the driver fined £384, ordered to pay £110 costs and a £34 victim surcharge, as well as having their driving licence endorsed with three penalty points after admitting driving without due care and attention.

One of mine I think, from last Autumn. If memory serves me correctly, there was also an element of “punishment” in there. I hope the driver’s punishment will deter this kind of driving in future pic.twitter.com/qn95JcAHuz

Guy told us: “I do remember as I cycled up to the roundabout the card driver beeped his horn at me, so I was half-expecting something. I didn’t expect such an exceptionally close pass though.”

He continued: “What’s interesting from the Twitter thread is the views that the driver should have been charged with dangerous rather than careless driving.”

The latter is defined by law as being committed when the standard of driving “falls below the minimum standard expected of a competent and careful driver, and includes driving without reasonable consideration for other road users.”

Dangerous driving, meanwhile, is defined as being committed when the standard of driving “falls far below the minimum standard expected of a competent and careful driver, and includes behaviour that could potentially endanger yourself or other drivers.”

The Crown Prosecution Service makes its decision on which offence someone suspected to have committed a crime should be charged with on whether there is a reasonable prospect of conviction.

That is one reason why, particularly in driving cases, the lesser offence of careless driving is chosen, rather than the more serious one of dangerous driving – although as one commenter on the thread pointed out, that is largely the result of a legal process that is in urgent need of reform.

The law has been developed in precedents set in earlier court cases that make proving 'danger', as defined in those precedents (and not as you and I would understand it to mean), hard to establish. Not fit for purpose.

Guy himself added: “I’m happy with the outcome, enforcement is the biggest deterrent and I think Avon and Somerset Police are a leading constabulary in the fight against road danger.”

Subscribe
Near Miss of the Day
NMotD Avon & Somerset