"I rode ten miles to the bike shop clenching it between my buttocks": Reader's collapsed saddle nightmare; Anti-LTN vandalism; "Bet you I can"; Pros injured by driver; National champs reaction; Merckx addresses Remco criticism + more on the live blog

Here we go again...Dan Alexander is the man behind the keyboard today, bringing you all your live blog action 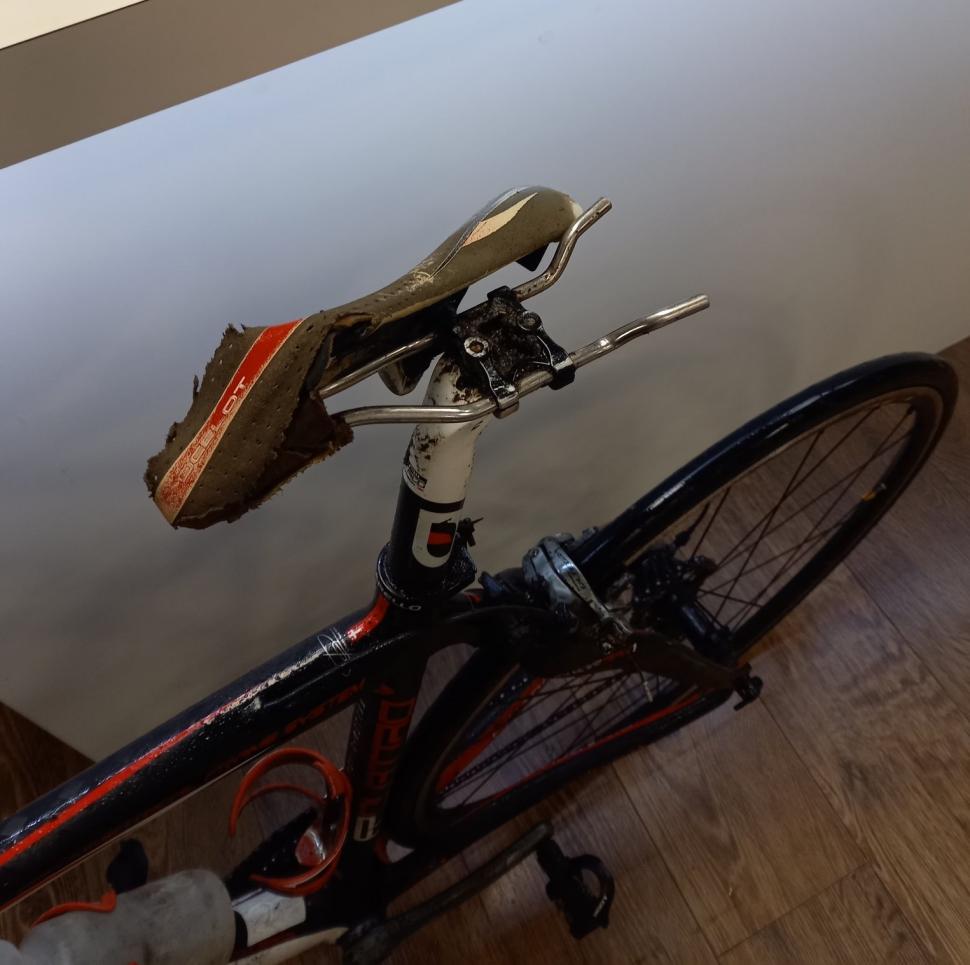 This was a good clue. pic.twitter.com/7AEm8j3tK8

Hope everyone has finished with their lunch...reader John Forbes has the definitive answer for 'when's a good time to get a new saddle?' When it's hanging off, leaving you perching precariously on the rails...

John was leading a ride back in June when this atrocity occurred. In his own words..."It had been looking worn for a while, but was a really comfortable saddle and matched the Pinarello bike. It has indeed done a considerable mileage. After it collapsed, I managed to ride it ten miles to the bike shop clenching it between my buttocks." I bet they got a laugh when he waddled through the door.

"The person on my wheel described it as like watching his wife do her maternity pelvic floor exercises." At least there was some saddle left and not just a very unforgiving seatpost...

We're having a bit of a component failure special today inspired by a post over on the forum. One of our readers has shared a pic of his snapped Shimano crank along with the tale of a weekend fall. What started as a mysterious creak ended with the rider hitting the deck and needing some new cranks..."So, sometimes a creaky noise isn't what you think it is," hawkinspeter concluded. I guess if you're putting out that many watts it's bound to happen eventually...

We've heard a few similar tales, especially involving Ultegra or Dura-Ace, so we'll have a look into it...(and be checking our cranks at the first opportunity)... 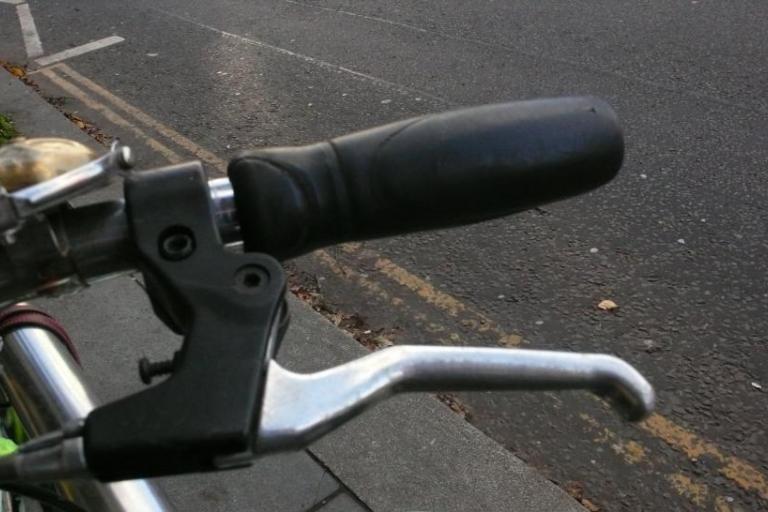 @Coldplay's out of this world performance of My Universe is using energy powered by 60 cyclists! 🚴‍♀️ 🎶 #EarthshotPrize

Ed Sheeran, Coldplay and KSI performed at the Earthshot Prize awards ceremony outside Alexandra Palace this weekend. The music was "powered" by 60 cyclists...no wonder NewsThump had a pop...

NEWS! Sixty cyclists who pedal-powered Coldplay gig yesterday were just trying to get away https://t.co/qyLBGKiOfB pic.twitter.com/L9QG1dFYyA

It rains 150 days a year in the Netherlands, we bike 365. #cycling #netherland
pic.twitter.com/GUbIdNWeRf 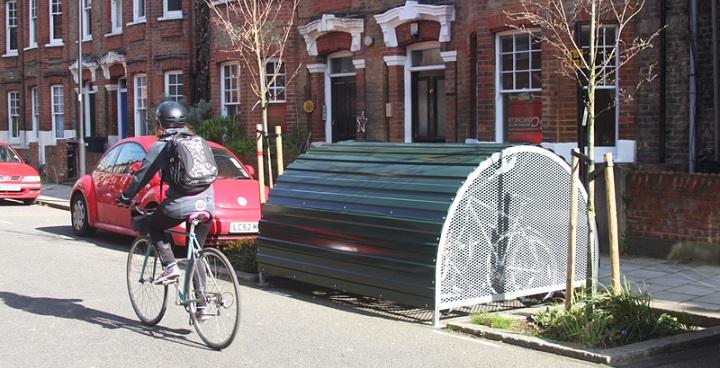 More than 50,000 people across the UK are on waiting lists for on-street bike hangars, according to new figures obtained by PA and reported by Wales Online. The numbers show there are just 20,000 hangar spaces but 51,000 people on the waiting lists.

Many of the facilities are in London and some boroughs have thousands of residents waiting. Hangars usually offer space for six bicycles and have proved popular amongst cyclists who want a safe place to keep their bike but don't have space in their accommodation.

Some of the other council areas to have hangars include Glasgow, Edinburgh, Bristol and Salford. There are hundreds of people of the waiting list of both Scottish cities. As of yet, no council areas of Birmingham, Cardiff, Liverpool or Newcastle have hangars. 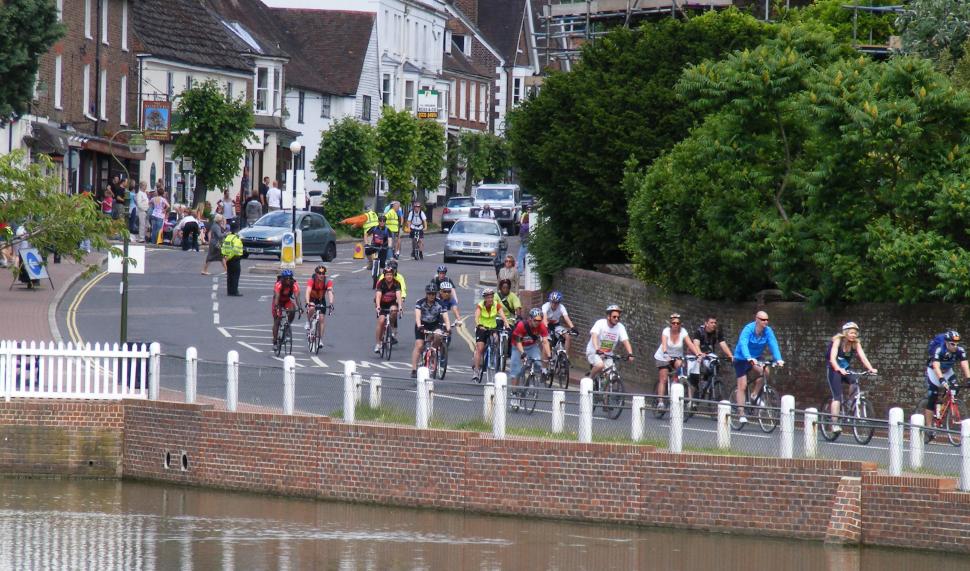 The British Heart Foundation's London to Brighton charity ride will return in 2022 after two years of absence because of the pandemic. The charity hopes around 16,000 cyclists will take on the 55-mile ride on June 19 with the aim of raising more than £2.8 million. There is expected to be record interest in the event and a ballot system has been set up to notify riders if they've been successful by December. 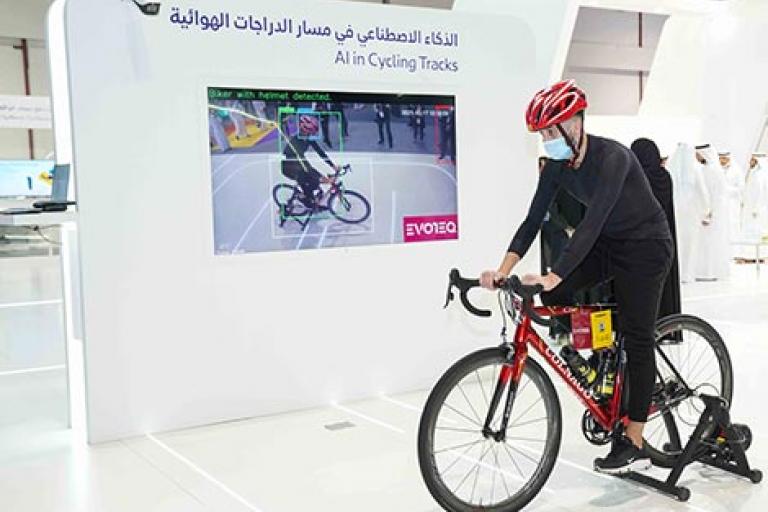 Technology will also be able to assess capacity of cycle tracks and speed of riders
12
18 October 2021, 11:59
Just in time for Christmas! Which non-cyclist relative will be getting you this?

What a rollercoaster Tour de France 2021 was. I wanted to live it all again and bring you all along for the history-making journey.
With @EburyPublishing & @PenguinUKBooks, we’ll be able to do just that on 25th November.

Cav is making hay while the sun shines...time for another book. 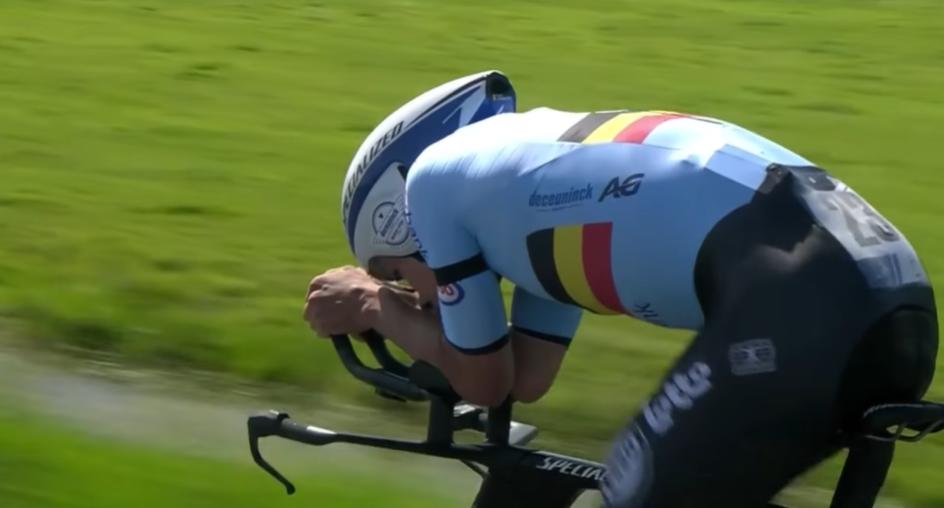 Eddy Merckx appears to be keen to put the rumours he dislikes Remco Evenepoel to bed, telling Belgian newspaper Het Laatste Nieuws he is a big fan and, "as far as I'm concerned there's no problem". Merckx made headlines for questioning Evenepoel's place in the Belgian World Championships team, arguing the 21-year-old is not a team player.

At the time Evenepoel said: "I have a lot of respect for Eddy and apparently that is not mutual." Merckx dismissed this in his latest comments published by the Belgian press. "As far as I'm concerned there's no problem. I’m a big fan of Remco — let that be clear," the five-time Tour de France winner said.

"Remco can race. There is a serious 'engine' in that body. Given the circumstances, Remco had an excellent year. Don't forget that he fell heavily [at Il Lombardia], it could have all turned out differently."

Merckx also emphasised he was not critical of Evenepoel at the World Championships, just the Belgian team..."Obviously he was fine! That's the sad thing. But that tactic…It all started with the team selection. Wout is your only leader, but why didn’t he get a teammate like Nathan Van Hooydonck for support. That makes no sense. And all those Quick-Step riders, was that necessary? I didn't like it. But the biggest mistake was Remco. If you take him, it can’t be as a domestique. That was, in fact, my message in that article."

18 October 2021, 10:10
Androni Giocattoli pros in hospital after collision with driver in Italy

Italian pros Simone Ravanelli and Luca Chirico were hit by a driver while training near Padua this weekend and were quickly rushed to hospital for x-rays and treatment. The pair were hit by the driver as the vehicle left a petrol station.

Euro Weekly News reports Chirico suffered a compound fracture to his right collarbone, while Ravanelli suffered a fracture to the talus of his right ankle. The team shared the news on Twitter: "Best wishes for a speedy recovery to our Simone Ravanelli and Luca Chirico who were hit by a car while training on the Padovan roads ahead of Sunday’s last race of the season."

The weekend of national champs racing began on Friday with the nighttime circuit races over the Lincoln cobbles. Ethan Hayter set himself up for a shot at the hat-trick, adding the crit crown to his TT title. Jo Tindley of the not-so easily said Pro-Noctis – Redchilli Bikes – Heidi Kjeldsen team took the women's race solo.

Yesterday, it was time for the main event of the week — the road races. First up, Pfeiffer Georgi backed up her eighth place at the Women's Tour by earning a sharp new jersey for next year. Josie Nelson took silver, while Hour Record breaker Joss Lowden was third.

On the men's side, Ineos Grenadiers made it a clean sweep of TT, circuit race and road race, but it wasn't Hayter this time...Ben Swift defended his title, powering away from Fred Wright and Harry Tanfield on the final ascent of Michaelgate. Tanfield was heartbreakingly caught by Hayter's late surge and ended up off the podium.

"Bet you a tenner you can't get this double wardrobe on your bike".. Safe to say our rider pocketed that 👍#BetterByBike #cargobike #SustainableTravel pic.twitter.com/ic4GP3SIOR

Turns out yes you can carry a double wardrobe on a bike... 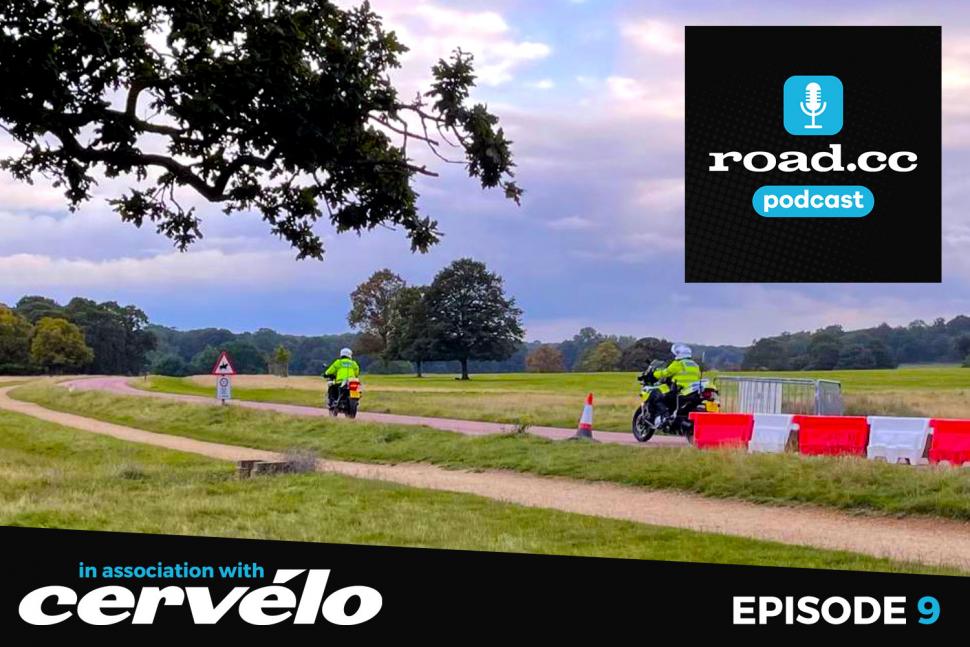 So, what did you miss while you were out enjoying a couple of days off?

On Saturday we had the story of the fan who proved his love for Cav by getting a great big tattoo of his face on his leg. We were talking tats on the Friday live blog, little did we know Paul James was about to blow the competition out the water. Check it out here...

At the end of last week we released the next episode of our podcast. This time we're talking about bike-jackings — what can be done to stop the worrying trend? We caught up with Alpecin-Fenix pro Alexandar Richardson, the most high-profile victim of one of the Richmond Park incidents, to hear about his frightening experience.

We also discuss our cycling pet peeves...get ready for red light jumping and those who don't say hello...

Elsewhere on the site, there's a buyer's guide for overshoes if you're looking for a solution to cold feet now that the weather has turned...and our bike at bedtime was Focus’ top-flight racey Izalco Max 9.9...

These were the scenes in Dulwich over the weekend as some, angry at local low traffic neighbourhoods, protested the schemes. The group had signs, one saying 'We want our roads back!' and vandalised one of the planters stopping drivers from using a shortcut.

The road closed sign had 'mind closed' scribbled over it, and a sign saying 'Cyclists against road closures' was stuck in the planter. Slightly more worrying was the news Labour councillor Margy Newens, a supporter of the road closures, had "a banner from the anti-LTN demonstration strategically placed on my garden wall".

Newens said: "Very shaken to be targeted for hate in my home again today of all days. Abusers just letting me know they know where I live? And letting everyone else know too? Feeling rather sick."

You want to own the road? Save up and buy it. pic.twitter.com/RIILlt59fG

Some questioned if our 'cyclists against road closures' sign maker even owns a bike, while others pointed out the irony their protest was conveniently unaffected by passing traffic, thanks to the planter...

LTNs, for whatever reason, seem to attract a passionate reaction from those who oppose them. Our archives have more than a few cases of LTN vandalism, and back in August two people were arrested in nearby Lambeth in connection with vandalism and removal of signs.

Elsewhere in the capital, one LTN in Hackney was vandalised within 24 hours of installation, while another scheme in Ealing had oil poured on the road. Vandalism has been reported in Manchester too, where a motorist filmed themself ramming a planter off the road.

The city's cycling and walking commissioner Chris Boardman responded to the  incident by insisting anti-LTN vandals "won't intimidate us".