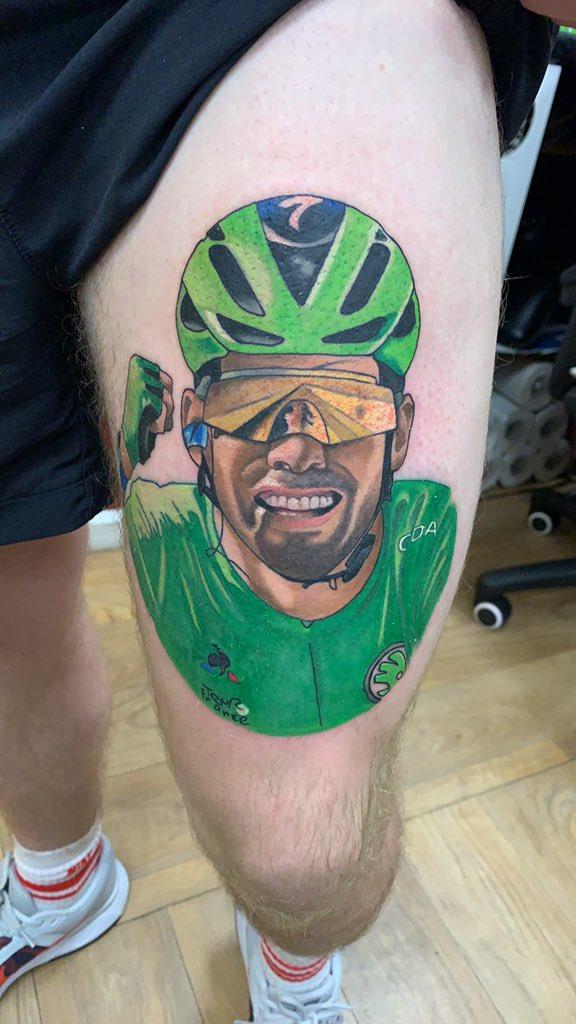 "[An] Ode to my idol Mark Cavendish who overcame adversity to prove he’s still the GOAT. Hopefully he likes this." ...
by Will Bolton

A dedicated fan has followed through on his promise to get a tattoo of Mark Cavendish if the Deceuninck–Quick-Step rider was able to take a single victory in 2021.

Obviously, Cavendish did win. In fact, he won 10 times. Including four stages of the Tour de France.

Paul James had been so excited by the idea of Cavendish returning to his former level that he had made a bet, on Twitter, that he would get a tattoo of the Manxman if he was able to take a victory.

When Cavendish did, true to his word, Paul, who works as a personal trainer, got an impressively large picture of the 36-year-old Deceuninck–Quick-Step rider on his left leg.

Ode to my idol @MarkCavendish who overcame adversity to prove he’s still the GOAT. @petatodd hopefully he likes this.

I said if Cav won another race this year I’d get a Tat of him..He won 10 🤣#MarkCavendish pic.twitter.com/O3AX9JHRJ6

Paul chose an iconic image of Cavendish wearing the Green Jersey at the Tour for his tattoo.

The response, on social media at least, appears to have been mostly positive so far.

And to be fair, it does at least look like Cav.

It is not yet clear if Cavendish is aware of the tattoo, but Paul said he hopes, if he does see it, he won't think Paul is too obsessed with him.