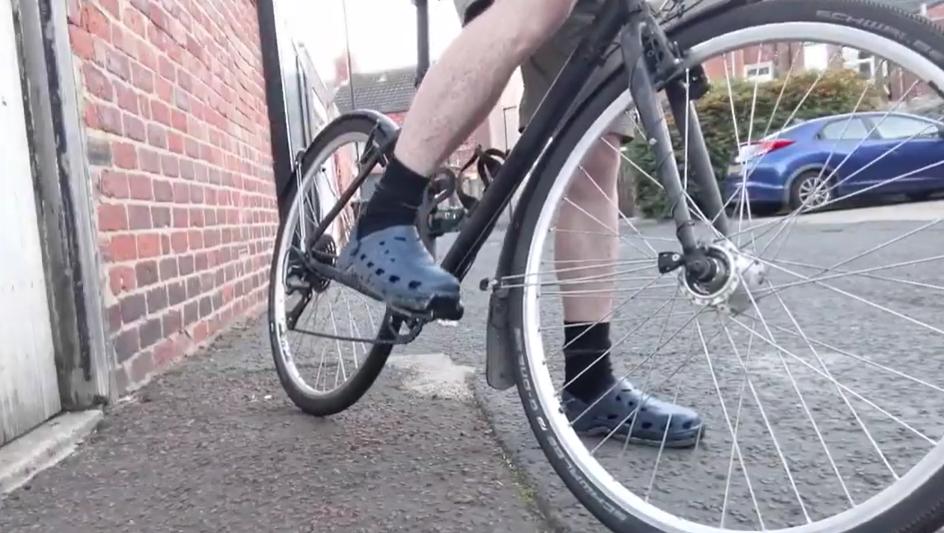 In the most important vote since a man with an orange tan was dragged kicking and screaming from a big white mansion, we can now reveal whether you think Crocs with cycling cleats built in are hot or not... and it's a fairly resounding 'no', with 59% of you objecting. Time to Croc off, good night!

16 February 2021, 21:58
An obstacle course, or a cycle lane? Bizarre bike lane bollards cause confusion in Dublin

South Dublin CoCo are now *intentionally* oncoming cycle traffic into each other.

*Intentionally* obstructing a footpath, making wheelchair access more difficult.
Pedestrians and cyclists FORCED to slow down for the crossing. Cars not.

This isnt safety. This is an absurdity. pic.twitter.com/ueFkf6gsQX

After yesterday's debacle from Dublin involving a crowdfunder that has raised tens of thousands of euros just to remove a one-way cycle lane, we bring you more bad cycling news from the Irish capital in the form if this utterly bizarre formation of bollards. Likened to a challenge from classic game show It's a Knockout, the Dublin Commuter Coalition have described it as "over-engineering" and "demeaning architecture."

It actually hurts my eyes. I’ve a rep in on it asking for all the unnecessary eye hurting parts to be removed. So most of it. I know others have too. Really have no idea how this happened. I have also asked to ensure it doesn’t again.

Local councillor Carly Bailey admitted that she had no idea how the eyesore came to be, adding: "I would like to think this was not the actual design intended, that it’s a one off and that something just went very wrong."

There is one person/organisation who likes what they see, however...

You want more bollards don’t you. We can tell. Give us a few days....#WorldBollardAssociation

Yes, I know. I’ve been waiting my whole life for this... pic.twitter.com/ExxKzeZYO4

Wout van Aert told FloBikes that he understands why the UCI has banned the super tuck descending position. He said: "We're not really arguing it because I understand why they made this rule, especially if kids are watching. Maybe it's good to show them how you ride a bike properly and not lying on it. For us as professionals it isn't going to make the races safer. I just follow what they say and let's see."

Yesterday, Van Aert said winning the rainbow jersey at a home World Champs in Leuven would mean more to him than winning the Classics, Tour de France points jersey or Olympic gold. 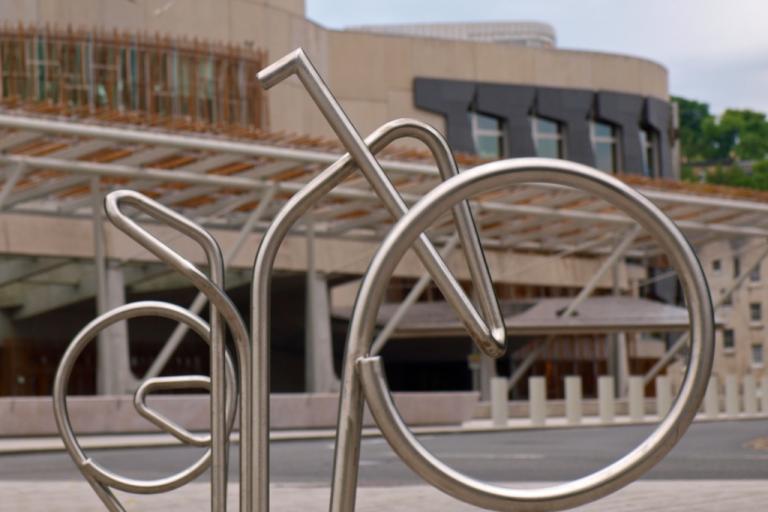 Currently only 2.5 per cent of central transport spending in Scotland goes on walking and cycling
1
16 February 2021, 14:49
Walkers and cyclists boost local economies in Scotland by £1.9 billion, according to new report 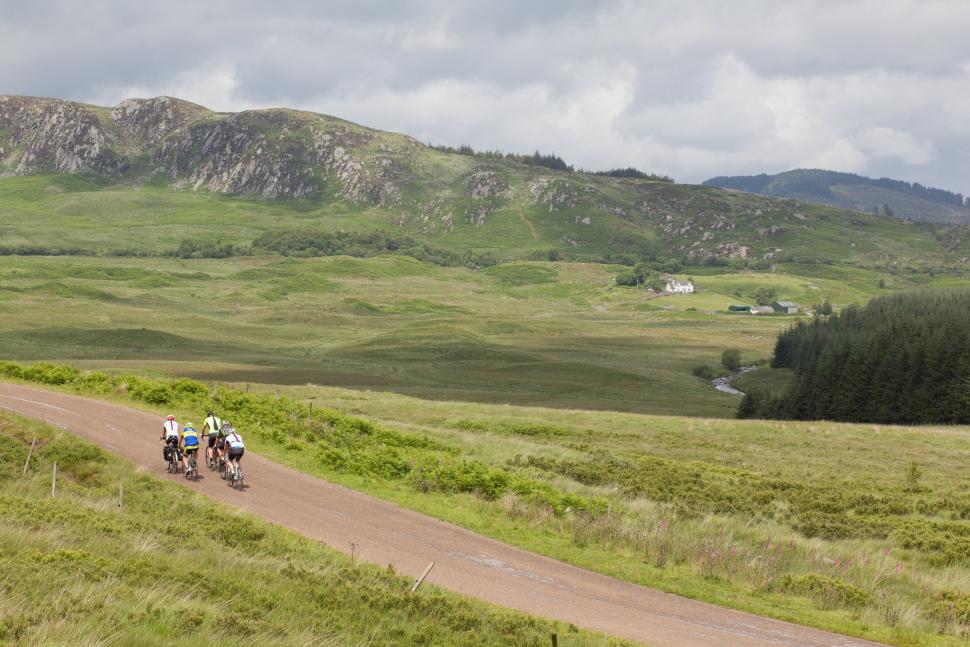 The Inverness Courier reports that Scotland's network of walking and cycling trails helped boost local economies by £1.9 billion. The figure was released as part of a new report into the impact of the national network of trails by NatureScot, Sustrans and Scottish Canals. Scotland's National Walking and Cycling Network (NWCN) includes the Great Glen Way, National Cycle Network and Scottish Canals.

The report found that walkers and cyclists made 145.1 million trips on the network in 2019, spending just under £2 billion and supporting around 27,500 jobs. On top of this, the reduction in car travel that resulted from these trips is estimated to have contributed a further £108 million, mainly through health improvements.

Another part of the report highlighted the mental health benefits of using the network of trails. 84 per cent of cyclists and hikers said it helped increase their physical activity, 75 per cent said it improved their wellbeing and 93 per cent said it boosted their overall life satisfaction.

"The rise in walking, wheeling and cycling over the past number of months has demonstrated huge public appetite to make happier and healthier journey choices across Scotland," said John Lauder of Sustrans. "Many people, regardless of age or ability, have discovered their local active travel routes for the first time. We now have a huge opportunity to maintain this momentum and deliver a fair, prosperous and green recovery for everyone in Scotland."

Ever wanted to know how to install some SPD cleats onto a pair of Crocs? Granted, you probably haven't...But on the off chance you have, KarlOnSea has just the video for you. Crocs for cycling didn't go down too well when Chain Reaction Cycles floated the idea on Twitter last summer. One reply from Chad McCullough summed up the mood: "No."

As for the Reddit user who detailed their Crocs-induced crash when they managed to jam their front brake with their stylish footwear as it slipped off the pedal after hitting a raised bit of pavement...

Never Wear Crocs on a Bike

But maybe that's just the point...Maybe having a safe and effective way to install SPD cleats is the solution to all Croc-related problems?...I'm sure I can guess which way this one's going to go... 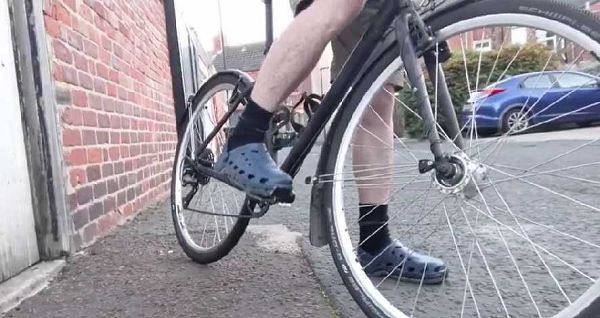 Sod the ice. That front wheel would be perfect for tackling those damned extending dog leads https://t.co/r9jtMREFGP

We knew you wouldn't disappoint... Martin King was initially told the bikes have to go, but his housing association has since told him that it will help him to find alternative storage
6
16 February 2021, 11:52
Chinese researchers develop riderless autonomous bicycle

If you ever get tired of riding your bike maybe you can take it for a walk like in this video...Chinese researchers have developed a riderless autonomous bicycle that can balance itself, avoid obstacles, detect and follow targets and respond to voice comands. Presumably you can ride it too...

16 February 2021, 11:41
Vuelta a España wilcards announced: No surprises as three Spanish teams get the nod for the final Grand Tour of the year

Burgos BH, Caja Rural–Seguros RGA and Euskaltel-Euskadi will join the big boys at the Vuelta a España after being granted three of the four non-World Tour wildcard spots for the race. Alpecin Fenix earned the fourth by being the highest ranked Pro Continetal outfit in 2020. No surprises that it's three Spanish teams invited, especially considering the success they've had at the race in recent years. In 2019, Burgos finished first and second on the satge five with Ángel Madrazo and Jetse Bol. In the same year, Jonathan Lastra finished second on stage 11 for Caja Rural.

This year's Women's Tour, originally scheduled for June, has been postponed owing to the COVID-19 pandemic.

We are working with @UCI_cycling and @BritishCycling as we look to reschedule the race for Monday 4 - Saturday 9 October 2021.#WomensTour #UCIWWT

The organisers of the Women's Tour have announced that the race, originally scheduled for the second week in June, has been postponed due to the pandemic. SweetSpot hopes they will be able to run the race in October and have requested alternate dates between Monday 4 and Saturday 9 October instead. The race, which is the only British women's race that is part of the UCI Women's WorldTour, is due to start in Bicester, Oxfordshire before finishing in Felixstowe in Suffolk six stages later. SweetSpot says they are working with British Cycling, the UCI and the race's regional stakeholders to accomodate the re-arranged race.

Eurosport and GCN have taken over the exclusive broadcast rights for both the Women's Tour and the Tour of Britain, which currently remains unaffected by today's news due to its September slot in the calendar.

Women's Tour race director Mick Bennett said: "We are obviously disappointed to be postponing the Women’s Tour from June but hope that by aiming to stage the race in October we can give the teams and public something to look forward to at the tail end of the summer."

Happy Pancake Day! 🥞 We think cycling is flippin' fantastic no matter what day it is. #ShroveTuesday pic.twitter.com/j9RUaOiCn9

Featuring Rebecca Charlton, who is currently lighting up the road.cc YouTube channel!

16 February 2021, 09:55
"And people think disc brakes are dangerous": Engineer replaces wheels with sawmill blades to cycle on a frozen lake

YouTube engineer, The Q, will have the UCI sweating with his latest piece of cycling silliness. He converted a bike, replacing the wheels with sawmill blades so he could cycle on a frozen lake. The Icycycle cut through the ice on its first outing but worked once he modified it, adding metal strips onto the blades. His video has now been viewed more than 15 million times...

It isn't the first time the YouTuber with almost 11 million subscribers has done wacky things with a humble bicycle. Last June, he made a fat bike using F1 tyres before in September building a homemade motorised bike using a 25kW motor.

Unsurprisingly, replacing your wheels with steel sawblades didn't make our winter survival guide for cyclists. Have a read for some more realistic cold weather considerations...

It seems Richard Carapaz is taking the news that he'll be riding the Tour de France for Ineos Grenadiers well...Two weeks ago he was filmed smashing down some watts on a ridiculously steep climb. He's taken his training to high altitude, climbing to 4,800m above sea level up the Cotopaxi Volcano in Ecuador. That's more than twice the height of the Col du Tourmalet...If only Richard's Strava wasn't private.

16 February 2021, 08:46
Fernando Alonso discharged from hospital after getting knocked off bike by driver

Thanks everyone for support . It was very heartfelt. 💙

In a statement, Alonso's Alpine F1 Team confirmed he had left hospital: "After a period of 48 hours observation at hospital in Switzerland, Fernando Alonso has now been discharged to continue his recovery at home. He will now have a short period of complete rest before progressively resuming training to undertake preparation for the start of the season."

The Spaniard was hit while riding near Lugano, in Switzerland's Italian-speaking Canton Ticino, and reports suggest that it was an oncoming motorist who was turning into a supermarket car park who collided him.