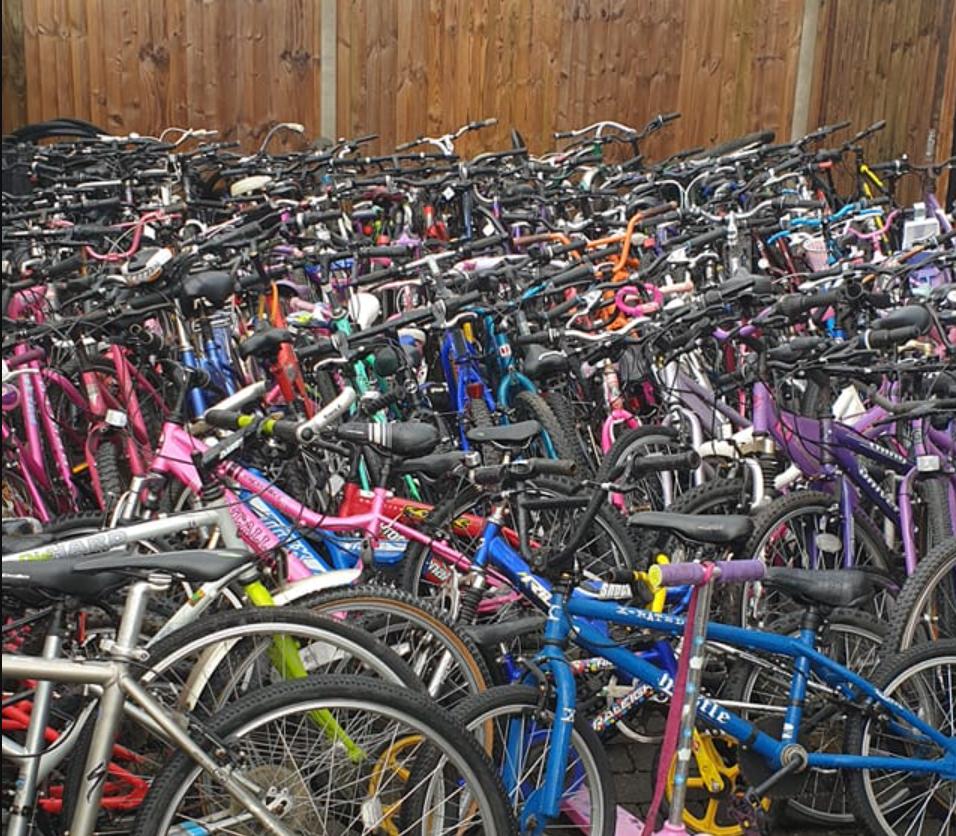 Martin King was initially told the bikes have to go, but his housing association has since told him that it will help him to find alternative storage
by Simon_MacMichael

A Hampshire man who has raised thousands of pounds for good causes by fixing old bikes may have to drastically scale back his good work, after being told by the housing association he rents his home from that he cannot store bikes on his driveway. The housing association has said that it looking to help him find alternative storage.

Martin King, who lives in Eastleigh, set up the Free Bikes Hampshire UK page on Facebook around a year ago, according to an article last month in the Daily Echo.

At that point he had raised more than £4,000 for organisations including the NHS, fire and ambulance services and Age UK, the charity he works for.

He came up with the idea of giving bikes a new lease of life when someone brought an old bike into the shop in Eastleigh where he works.

Because the bike was damaged it could not be sold at the shop, so after making a donation, he took it home and set about fixing it.

He began finding other bikes to fix, covering the costs of repairing the bikes as well as petrol to collect them himself.

He has now got more than 1,000 back on the road, giving them away via the Facebook group – some recipients making a donation – and occasionally raffling some to raise money for charity.

But now, Portsmouth-based Vivid Housing has told him that most of the bikes he keeps stored outside his property have to go.

He broke the news to the Facebook group’s 2,700 members yesterday, since when offers of help including trying to find temporary storage have flooded in on the page.

One member of the Facebook group, writing yesterday, said she had herself had received bikes Martin had repaired, which “since lockdown has help me personally keep my children sane. If it wasn't for him i wouldn't be able to go on a bike ride with my children.

“He has brought some very happy bonding days with me and my children so I for one would like to ask everyone that Martin has helped to post something about what he has done for you in support in helping him find some help in storage or some other avenue out there,” she added.

Martin told road.cc today: “I am looking into so much at the moment. People are offering storage, but it’s only short term.

“I am waiting to hear back from the council about free storage but that will take a while.

“There are other things people are looking into right now, I’ve got a couple of weeks to clear the bikes.

“The housing association say my driveway is completely full but it is not as I can still park my car on my driveway,” he continued.

“I think it’s the fact that they don’t like the way it looks with lots of bikes there, all stacked up. Someone is calling the CEO of Vivid today, so hopefully that might get it sorted but as ever that takes time.”

He added: “I love what i do helping people to get bikes. Kids love it when they get a bike and the parents get one so they can go out as a family, helping people get to work, and it has helped lots with their health to be able to get out on a bike.

“I will carry on whatever happens, I’ll just have to do less, but will carry on. I’ll still do raffles to make money for charity.”

In a statement, Derek Streek, head of neighbourhoods at Vivid Housing, told road.cc: “The work that Martin has been doing to support his local community is fantastic and we’re really keen to work with Martin to source alternative, longer-term storage for his bikes, to allow his great work to continue.

“We have a health and safety responsibility and a responsibility to local residents, to ensure that driveways and vehicle routes are kept clean and tidy and clear of obstruction, but we hope to find a solution for Martin soon.”

Last week, before Martin revealed the issue with the housing association, one of his supporters set up a Go Fund Me page to enable him to raise funds to help keep the bikes secure, with £100 raised to date.