It's the start of a new week on the live blog, Dan Alexander is here to round up all the weekend action... 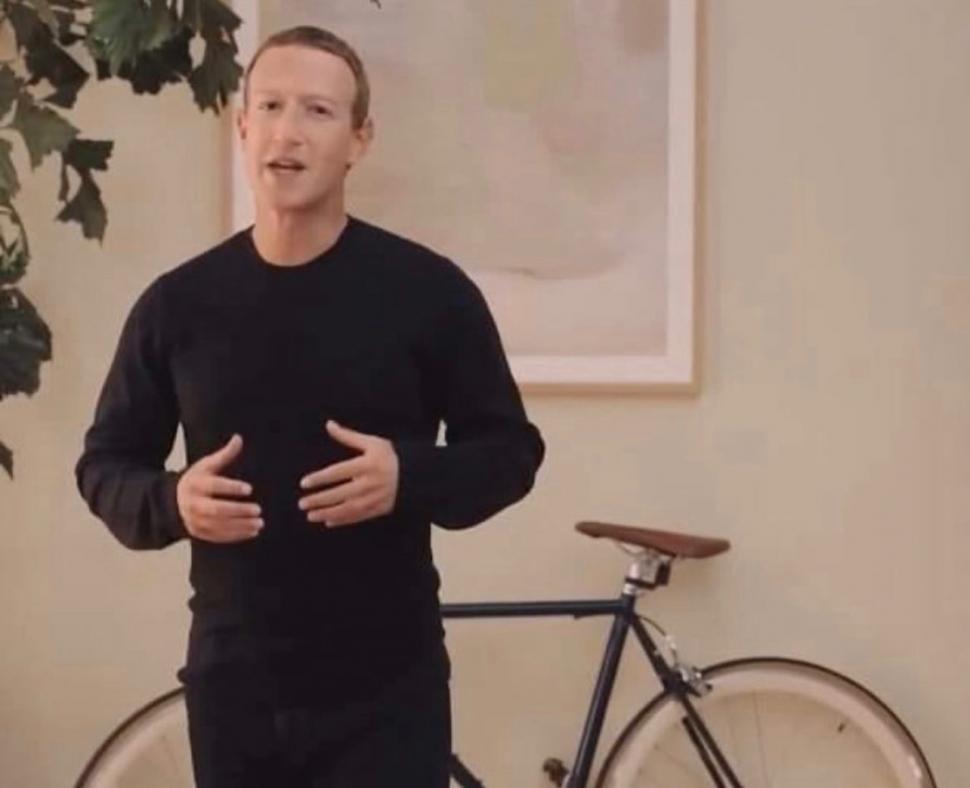 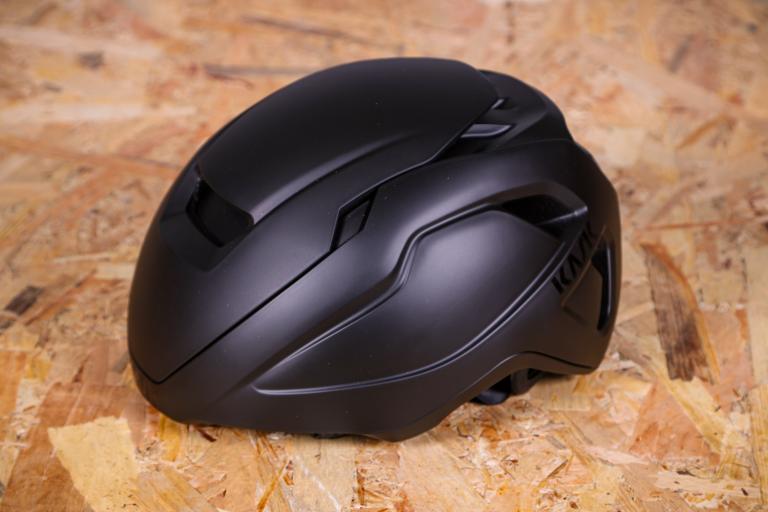 Amanda Coker has racked up another record to her impressive palmares by breaking the women's 24-hour distance record. The Twenty24Pro rider also became the first woman to break the 500-mile barrier in the process. Coker rode 512.52 miles, smashing the previous best of 439 miles.

Her team added a Zwift 24-hour record could soon be on the cards. I mean, if you can, you might as well just take all the records... Last seen in Sky kit four years ago, Elia Viviani will be back riding for Ineos Grenadiers next season. The Italian, a newly-crowned world champ on the track, is the fourth signing of Ineos Grenadiers' Peep Show-inspired recruitment day (see the earlier blog post if you're now very confused).

As most of the whispers in the replies suggested, Spanish champ Omar Fraile has also joined, along with German U23 champ Kim Heiduk and exciting British prospect Ben Turner.

The team has stressed Viviani's deal is three years long, and includes the 2024 Paris Games, an event he'll go to looking to win a third Olympic medal.

"From the moment I left the team, I had in my head that one day I would come back – and now that day has come and I couldn’t be happier," Viviani said.

"In my years away, I’ve never lost contact with the team – with Dave [Brailsford], Rod [Ellingworth], and with the Italian riders and coaches. I am really good friends with lots of the team members and especially Dave. I never missed an opportunity to speak with him at races about cycling, my team, my season, and this team. This feels like coming back to a family for me."

How to remove an *incredibly tight* tyre from rim:

2: roll tyre over & clamp the bejesus out of it as close to rim as possible

3: swing bottom of wheel out

Mark Zuckerberg is one of those figures who's never going to get a sympathetic reaction from the social media masses. Needless to say, his silly saddle scene has attracted some quite tremendous roasting from our readers...

There's been a murder...

Two things in that picture that have never been ridden.

On Facebook, David Kelly reckoned it probably explains his high-pitched voice...while Ross Thompson suggested it's all a ploy to try (but ultimately fail) to make him seem more human. Viktor Major added: "Either bike fits or testicles do not exist in the metaverse"...you see where this is going. But is the bike even real?

In the metaverse the bikes are just virtual. Saddle angles are just a render 🤷‍♂️

Under here, Brooksby summed the bloke up nicely..."Zuckerberg is one of those people who looks more like a CGI avatar than his actual CGI avatar..." That's a nice place to end.

01 November 2021, 15:02
Zwift Academy finalists announced ahead of finals in Mallorca The ten finalists of Zwift's Academy Road program have been announced and will now progress to the finals in Mallorca where they will compete for a pro contract with Alpecin-Fenix or CANYON//SRAM Racing.

More than 150,000 riders were wittled down to 10 who will now, for the first time, attend a joint camp and compete in tasks to try to impress their prospective teams. The finals will be broadcast by GCN with the winners being announced in the final of five films on 17 December 2021. 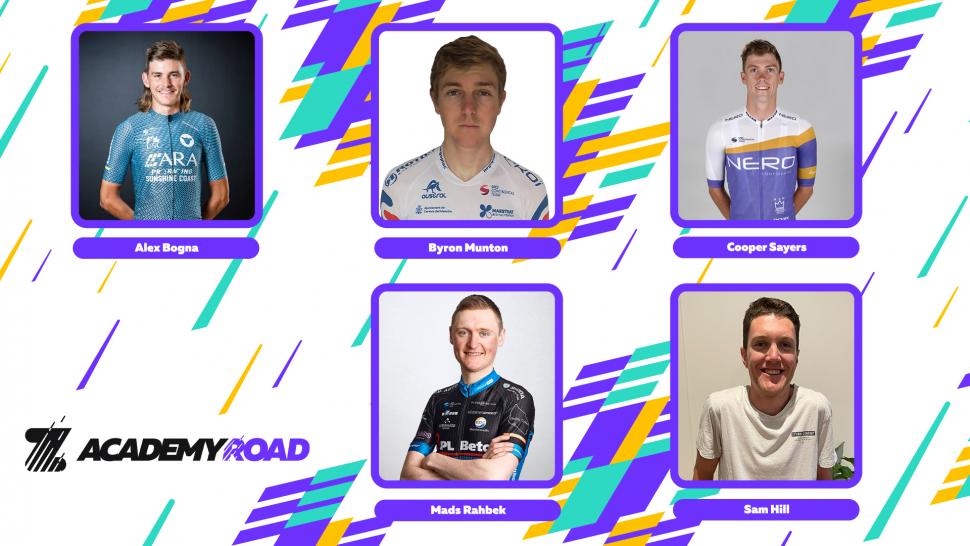 Anyone at hill climb champs will tell you it was a grim autumn day in the Peak District yesterday. Tom Bell took the men's crown from Andrew Feather, while Bithja Jones was crowned women's champ. More importantly, road.cc Liam was briefly the fastest man up Winnats...chapeau. In his own words, "Yours truly was first senior rider to break four-minute mark (3:55) shame 61 people decided to go faster." Despite his best Trump-inspired 'stop the count' protests, the event continued...

Bell's winning time of 3-01.6 was both a course record and just under seven seconds faster than second placed Feather. Seriously impressive stuff. Tomos Pattinson and Sannah Zaman are the junior champions.

There was a slight controversy on the day however...'don't bring flares to bike races' is a pretty safe rule for life, but especially at hill climbs...

If anyone EVER takes a flare to a hill climb again. So glad a member of the crowd sorted them out. Complete idiots. 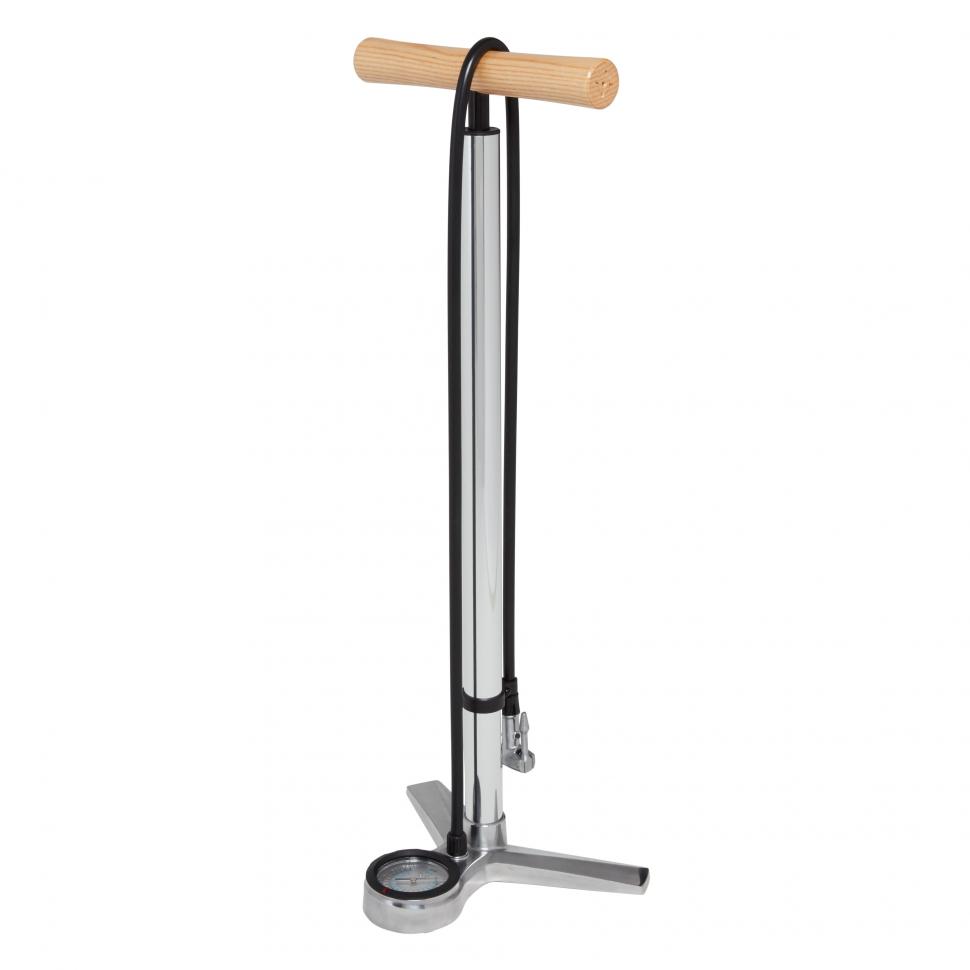 EcoTrax (£24.99): This entry-level pump is capable of pressures up to 120psi. It has a 1.5” gauge and an auto-select pump head. The smaller size of this pump makes it ideal for home or travel use, says TruFlo.

Easitrax 4 (£34.99): Available in three colours, this pump caters for pressures up to 160psi and features a 2.5” gauge, a larger steel base for improved stability and an auto-select pump head.

Maxtrax 4 (£39.99): This pump has all the features of the Easitrax and adds on an easy-reach hose attachment, making it a better option for bikes in workstands or mounted on car racks.

Supertrax (£54.99): With a 3” pump and an easy switch to change between high volume/high pressure modes, the gauge displays the 1 to 40psi range in 1-digit increments that should make it easy to find the exact pressure you’re after for inflating both gravel and road tyres.

Classictrax (£84.99): Pictured above and finished off with a polished aluminium barrel, traditional wooden handle and die-cast aluminium base, this is definitely the stylish option. It has an integrated 2.5 inch gauge and can inflate up to 240psi making it a great option for use at home, the workshop or even the velodrome. The twin-valve pump head also has an air bleed button to help hit pressures exactly.

Chucking in a Peep Show GIF is always going to go down well with us...a few popular guesses in the replies saying Elia Viviani and Omar Fraile will be making an appearance later on. We'll see...

Number one has already been announced...it is German national champion at under-23 level, Kim Heiduk. He joins the already confirmed signings of young talents: Aussie wonderkid Luke Plapp, American prospect Magnus Sheffield and young Brit Ben Tullett on the team next year. Let's see who the other three riders are...

01 November 2021, 11:01
Cycling kit straight out a gallery...Stolen Goat's new Adventures with Art collab with the Tate 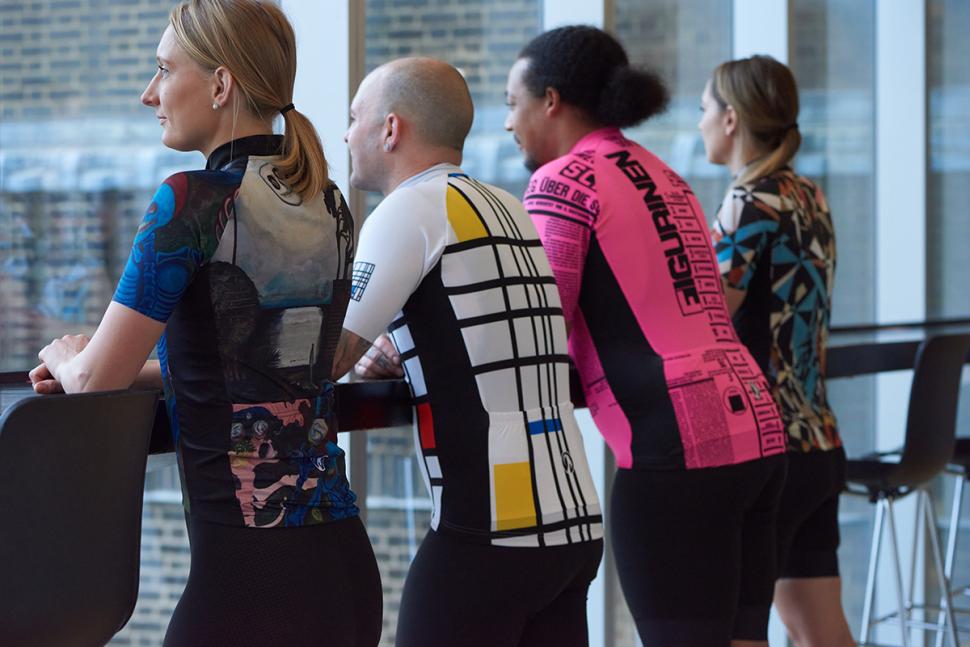 You can now buy cycling kit and accessories printed with artwork from the Tate archives.

Already well-known for its loud and colourful designs, Stolen Goat partnered with the Tate for this new Adventures with Art collection.

“From the exploration of hue, tone and intensity in the work of Jean Spencer, to the audacious departure from the conventional in the early geometric works of David Bomberg. This collection is a union of cycling and artistry,” says Stolen Goat.

The packaging for the jerseys in this art-y collection is also sustainable as it makes use of the paper used to sublimate the design onto the fabric.

“Usually, this paper would be discarded or recycled in the manufacturing process – but we’ve had each paper trimmed to size to wrap the jersey it was used to create,” Stolen Goat explains.

Each order also comes complete with a postcard, featuring a photograph of the artwork and information on the title, date and medium used to create it

Oleg Tinkov, the former owner of WorldTour outfit Tinkoff-Saxo, has been convicted of tax fraud in the US and fined $500m, on top of a suspended one-year prison sentence. The Russian is reportedly worth £2.2 billion and formerly owned the cycling team that attracted big names such as Alberto Contador and Peter Sagan.

Tinkov's problems began in 2019 when he was indicted for hiding stock market gains. He was arrested in 2020 and paid bail of £20 million. Official documents state Tinkov was "sentenced today for his felony conviction for filing a false tax return."

As required under his plea agreement, prior to sentencing, Oleg Tinkov, aka Oleg Tinkoff, paid $508,936,184, more than double what he had sought to escape paying to the U.S.

Treasury through a scheme to renounce his U.S. citizenship and conceal from the IRS large stock gains that he knew were reportable. This includes $248,525,339 in taxes, statutory interest on that tax and a nearly $100 million fraud penalty.

Tinkov was additionally fined $250,000, which is the maximum allowed by statute, and sentenced to time served and one year of supervised release. 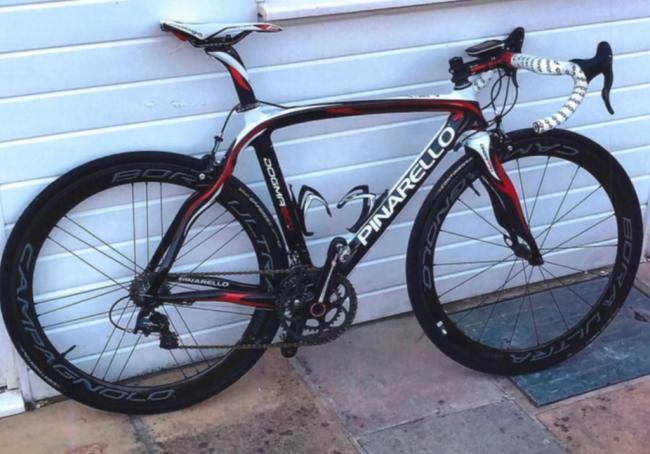 A cyclist was assaulted during an attack near the Welsh border last week, West Mercia Police has revealed. The rider's Pinarello Dogma (pictured above) was stolen during the attack at around 1.30pm last Monday (October 25) on the A438, near the border between Herefordshire and Powys.

The bike is extremely rare and police ask anyone who sees it for sale to please get in touch officers would also like to hear from any drivers who were travelling on that stretch of the A438 at around the time of the incident who may have dash-cam footage.

Anyone with information can visit West Mercia Police quoting incident 515i of 25 October. 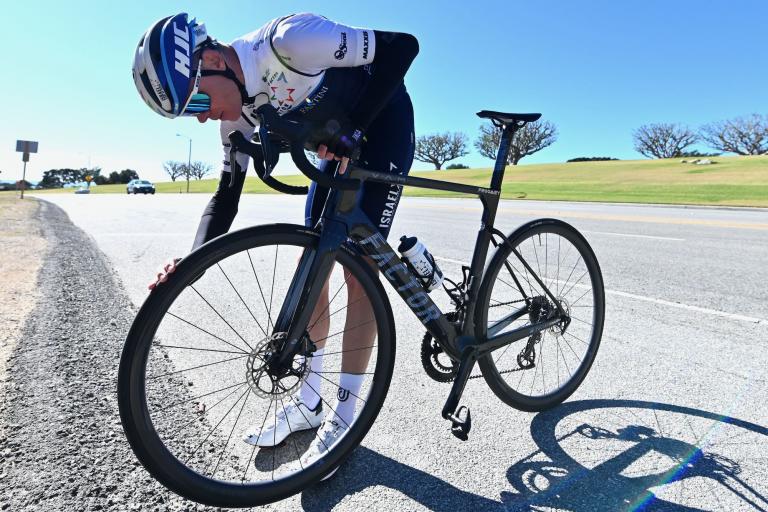 Chris Froome is all aboard the disc-brake hype train

The four-time Tour de France winner has changed his tune after suggesting the the technology wasn’t quite there earlier this year
16
01 November 2021, 09:49
Halloween costume of the year?

If you've got any leftover spooky season energy check out the latest road.cc Podcast where we talked about the scariest thing that has ever happened to you on the bike? (Plus cycling with your cat, because why not?)... If you were too busy trick or treating here's some of the top stuff on the site over the weekend...

Cyclists from across the UK and beyond are headed to Glasgow for the start of the COP26 climate change conference.

The husband of a pedestrian killed by a cyclist has claimed that ministers are scared of the "cycling lobby" as he campaigns for tougher laws on cyclists. Matthew Briggs is calling for cyclists to be subject to similar laws to motorists causing death by careless or dangerous driving.

And our bike at bedtime is the new limited edition Cinelli Nemo Alessandro Mendini gravel bike...

Phil Gaimon spotted the blunder in the background of Facebook's rebranding last week, one of the many bizarre home decorations that had people questioning why one of the biggest companies in the world couldn't do better? I mean why was there BBQ sauce next to framed photos?

Is Zuck using a bottle of BBQ sauce as a bookend?

Is he talking about “Meta” or “Meat”? pic.twitter.com/8L2hWSBaJp

Anyway, to us, the more important question is: who set up Mr Zuckerberg's bike and has he actually ridden the thing? Of course it's probably naive to expect anything in the video to be genuine Zuckerberg possessions instead of not-so-carefully selected props...

At least it gave the cycling community a laugh...

All those billions and he can't even buy a spirit-level...

The Facebook, sorry Meta, CEO apparently used to enjoy cycling, until he broke his arm after forgetting to unclip. In a 2018 interview in the New Yorker, Zuckerberg said he'd ditched the cleats and now does all his cycling on Peloton.