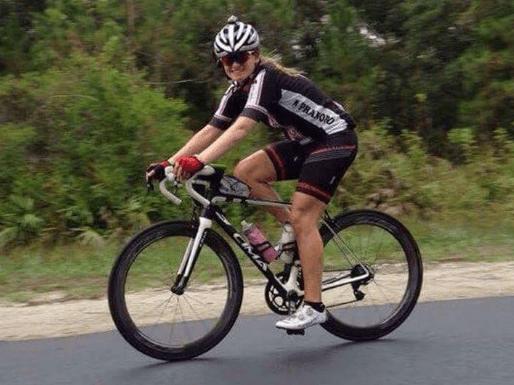 24-year-old American sets her sights on Tommy Godwin’s record, set in 1940
by Simon_MacMichael

Amanda Coker has set a new record for the greatest distance ever ridden in a year by any cyclist, male or female, after riding 86,573.2 miles in 12 months – and now has her eyes on eclipsing Tommy Godwin’s record of riding 100,000 miles in the shortest time.

The 24-year-old’s 12 months of riding, which finished on Sunday, saw her smash the Guinness World Record under Ultra Marathon Cycling Association Rules of 76,076 miles previously held by Kurt Searvogel by more than 10,000 miles.

It was riding with Searvogel at Flatwoods Park close to her home in Tampa Bay, Florida that inspired Coker to undertake her own attempt at the record.

Since setting off on 15 May 2016, Coker rode an average of 237.19 miles a day, steadily increasing her daily mileage throughout the year.

On Friday, with two more days of the year to go, she rode 302 miles, breaking her previous daily record of 277 miles.

But to borrow an analogy from cricket, her final day’s ride was very much one of batting for the average as she put in 237.5 miles.

Besides beating Searvogel’s record, set in 2015, she also knocked Billie Fleming’s record for the greatest distance ridden by a woman in a year out of sight with months to spare.

Perhaps the most remarkable part of Coker’s story is the fact that she only returned to cycling in 2015 after sustaining a brain injury when she was hit by a driver while out cycling with her father in 2011.

Her riding was confined to laps of a circuit at Flatwoods Park, leading some to argue that her record cannot be compared with the 75,065 miles ridden by Tommy Godwin in 1939.

But it’s an astonishing achievement, and British rider Steve Abraham, who earlier this year set out on his third attempt at the Year record, has given Coker his full backing.

In February, he wrote: “I don't think she has it as easy as lot of people think. The circuit she rides is known locally as ‘The Windy Woods’, because it isn't that well sheltered from the wind.

“The problem with that is the wind. Any wind over 5mph lowers the speed too much.”

Ian Dille from Bicycling.com joined Coker for a day’s riding last week as she came to the end of her 12 months of riding, and had no doubt that she is “for real” as he wrote about her endeavour.

And now, she wants to carry on riding to hit 100,000 miles. The record is currently held by Godwin, who had set off on his Year attempt on 1 January 1939 and eventually finished his ride after hitting six figures in May 1940.