The future of round-town transport from Giro, Canyon, Vaude & more
by TR McGowran

Road racing pushes bikes to get lighter and nominally faster, a Watt or two at a time. But innovation in urban and commuting bikes and gear is far more diverse than the single-minded pursuit of sleek composite speed. Style, practicality and sheer novelty are the order of the day here, and you don't have to choose just two.

The commuter market is so big now, as more people take to their bikes to get to their destinations, manufacturers are addressing their needs and producing kit for every type of rider out there.

You don't have to look like a fell walker on a bike or a pro rider on your route to work; technical gear is well disguised to fit in most wardrobes and the same is happening with town bikes.

You can match your bike to what you are wearing or vice versa, an old fashioned bike to go with your vintage togs to a neon rocket to match your Lycra or maybe have something in leather like Look's custom cow shod carbon flat bar machine. The choice of footwear for clipless pedals that go well with jeans is looking much better. I like the style of a road shoe but dainty shoes only look good at the end of tight fitting legwear and once you reach a certain age, anything tight fitting should be out-lawed.

Look-style cleats in town aren't great, they are hard to walk in and wear very quickly unless you are a master of track standing so that forces us to look at the mountain bike shoes. They tend to be chunky soled with unnecessary tractor like tread and holes for studs if you should ever need them walking on the pavement. Then there are touring shoes - boring!

Traditional looking cycle shoes which always remind me of Camper trainers are slowly increasing and have largely been produced by high end bike cobblers like Quoc Pham.

Quoc has  a couple of new models that are more casual-looking resembling an Adidas Stan Smith, in low and high top versions.

Giro has also released a smart shoe called the Republic which will go with their smart new commuter clothing line. It is available in a range of colours, including a white version and one in suede. The perforated sides should help ventilate your efforts yet a solid toe box for better weather protection and to help keep their shape and look like they will be more comfortable for those with wider, squarer feet. The other nice feature is the replaceable rubber treads, something Sidi also do on their high end mountain bike shoes. It’s a nice touch for those who need that extra justification for spending lots on a pair of shoes. For the more more sporty look and something I see as becoming more than just a fashion statement there are the garish coloured shoes over in the mountain bike enduro market. They look like a good option for town with good performance features and the ability to walk but with less chunky tread than a normal mountain bike shoe. Again Giro had some nice bright coloured examples and also Vaude, better known for their backpacks introduced a new range of 'out-doorsy' SPD shoes and boots for those who like to travel in Merrells should prove popular. 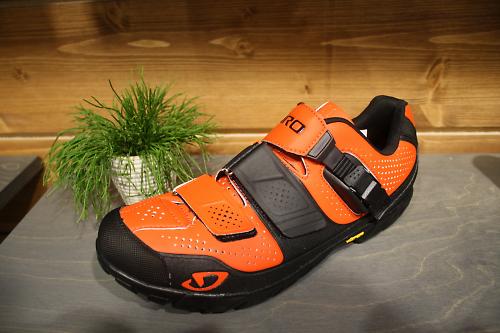 Or if you can't afford a new pair of snazzy shoes how about these awesome shoe covers from Sidi. Sorted For a peek into what Canyon thinks the future might look like, they had a really slick looking concept bike that they say will be in production soon with very few changes. It definetely ticks the right boxes. It is sleek and has all the features necessary for a town bike integrated within the design: mudguards, lights, grips, locking thingy. It wasn't electric either so at least Canyon must still believe that we will be able to move our legs in the not too distant future. It was also in flat grey colour, like primer, which will bring out your fluoro accessories nicely. Integration is what hopefully we will see more of, modular design add-ons rather than the antiquated bolt on racks and brackets we have now.

Lights built into handlebars and seat posts will help sharpen the aesthetic of future builds; a few manufacturers had these on display over in the Taiwan isles. 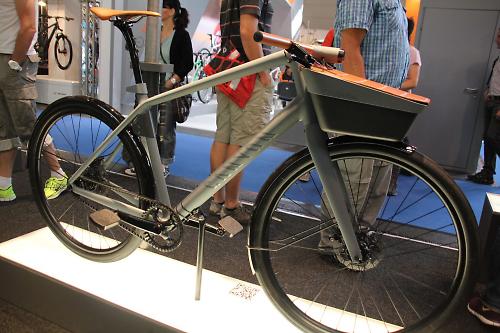 if you want to use a bicycle to do more than just get you around then you will need to carry stuff, and bike luggage has been given a face lift too.

Pannier bags don't just come in boring plain black nylon any more. Thule had a fluorescent yellow range that would make the cycling paramedics look twice. What I want to see more of was aerodynamic luggage and new ways of attaching it. Thule did have some very neat and compact bags that mount on your seatpost with about 10 litres of space, about half the size of a small backpack, enough to carry spare under garments and a waterproof or a snack for Mat Brett. I think these will be popular on the early morning power/Strava commute into the city.

Everyone had a smartphone carrier.It looks like we will never be able to escape the boss or the spouse out on a ride; if you get one for Christmas from the loved one then they might be thinking you are having an affair.

Basil have stepped into the commuter arena too. They don't just do bags to carry your organic veg in, they have a full range of businesslike bike luggage including a front handlebar bag that can help display your iPad, yes iPad, under a protective waterproof screen. You could knock out a few emails waiting at the lights or catch up on the last episode of Breaking Bad while on the move.

I saw handlebar iPad mounts a couple of years ago and they reminded me of those massive TV remote controls you get for old people sold in the back of the Sunday Times magazine. 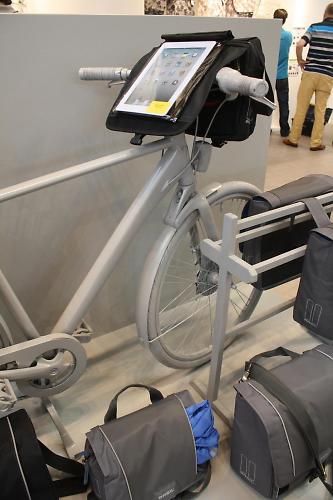 A few years ago nearly every manufacturer had a one-gear wonderbike on display. That fad has gone but like the fashion cycle of skateboarding, the hardcore remain and one brand that is still waving the flag of fixed gear bikes is Bomb Track. Their small but well formed range of fixies included an alloy track bike and tough 700c steel bike with tall riser bars and a 26 inch wheeled freestyle bike for the hardcore nut jobs; there was even one fitted with pegs! Word has it that they will be coming to our shores soon, let's hope they get a wiggle on. Wink, nudge, etc. 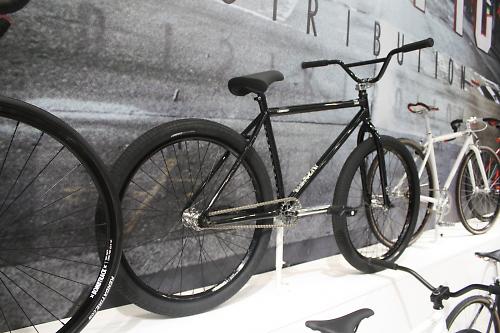 Despite all the carbon and day glo graphics and tech that litters the halls of Eurobike, the urban market still likes to keep an overall retro vibe. German retro bike outfit Garage 271 had their handsome 1930's roadster remake model, the Challenger and a very cool cruiser prototype with lightning bolt shaped extra tube under the top tube, in chrome. I think we are going to see a few copy cat versions of this which is a kind of copy of a clunker but made for the road not dirt. 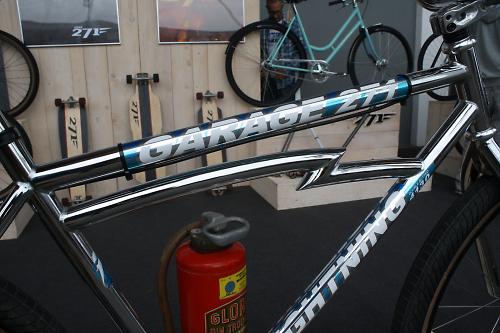 Giant's town bike, the Seek, is mixing a retro look with a subtle modern twist. It has the nice matt paint job and it also has big balloon tyres like a beach cruiser. Could this be the start of big tyres on town bikes like the fat bike craze over in the land of mountain bikes? I think 45mm or bigger slick tyres on a 700 wheel will roll into next year’s ranges. The Seek had a novel protective plate along the top tube like a chassis number plate you would find on a car but it wasn't just there to look cool, it also prevents dings from when you are locking it up. Neat. 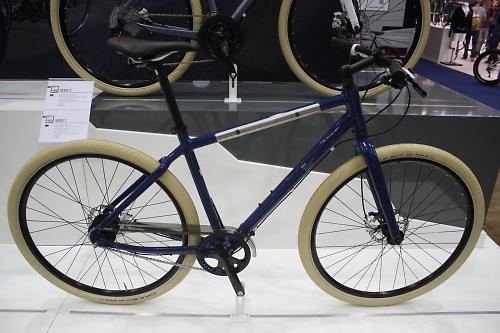 Keeping things British when everything else is so European is what Cooper has managed to do rather well with their special edition models and their collaboration with dapper British tailor Hackett. Elegant subtle colourways on chrome and dressed with smart vintage looking luggage. Look out for a range of expensive 'clothes you can wear on a bike' from Hackett too. I'm thinking more stage coach than band wagon. 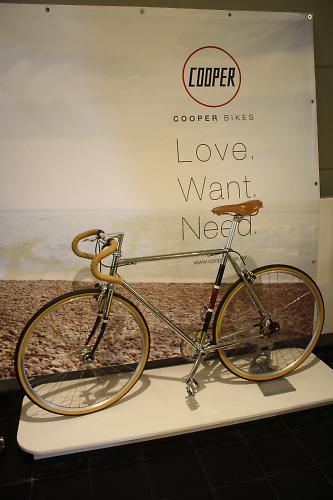 I like collaborations, they are a great way to ascertain where a brand positions itself, but they are more often with car manufacturers like BMC and its crazy priced Lamborghini bike. Don't get me wrong, I would love one, and I would be very happy with one, I would even settle for just the Lambo. Please. Or the cash equivalent.

Charge bikes do it very well, they've cross-pollinated with the likes of Carhart, Oakley and Conran and I think we are going to see more next year as brands get creative.