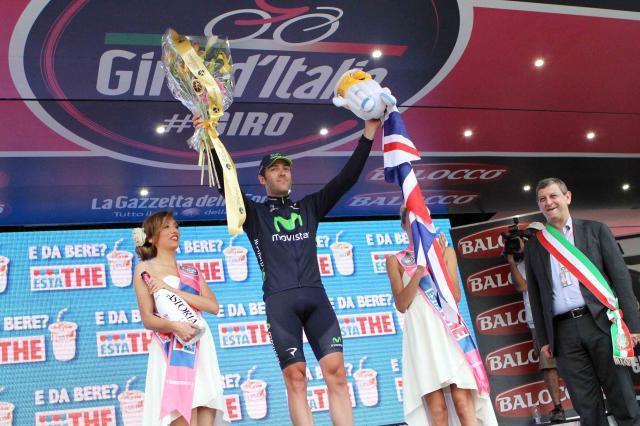 British riders give contrasting views on the practice
by Alex Bowden

Following reports that the Tour de France is considering abandoning the use of podium hostesses, Giro d’Italia organisers RCS Sport have said they have no plans to follow suit. Race director Mauro Vegni said he thought that the changes are just a “temporary trend.”

Speaking to SBS, Vegni said: "RCS Sport believe that in this specific moment it is more of a temporary trend to remove podium girls from sport events.

"As long as those girls are treated with respect and carry on their job in a professional manner, there is no reason for changing the hospitality process.

"RCS Sport recruit them through agencies specialised in hospitality and events, such as trade fairs, exhibitions and other sporting events.”

There were contrasting views on podium hostesses from two British riders.

Team Sky’s Luke Rowe said:  “They’ve always been there; it’s quite an historic thing when you go on the podium, you get a kiss off a podium girl.

“I think the whole sexist thing around the world has gone a bit crazy, everything is growing out of proportion. I don’t think it’s necessarily exploiting them because it’s their choice to do it and it gives someone a job. On the flipside, if you had podium guys is that right?”

Alex Dowsett said he didn’t think the practice was necessary.

“It’s not coming from a feminism, sexism point of view, I just don’t actually know what value it adds to an event.

“To be honest, I wore the yellow jersey at the under-23 Tour de l’Avenir and Bernard Hinault presented me the jersey and zipped that up. I think having someone like that is a lot more significant because of what they have achieved.”

Kaitlin de Kort, a model and former podium hostess who met her husband Koen de Kort (Trek-Segafredo) through her work, feels the issue is not the role itself, so much as how hostesses are treated.

“I agree there are certain times where companies have dressed girls inappropriately and sexualised them but I don’t think banning them is the solution.

“Hostesses should be dressed appropriately, with style and respect. I have seen too many girls being objectified by companies dressing them in next to nothing. This, I have a problem with.

“There were times that I did question outfits I was made to wear. We were made to wear very skin-tight, short outfits, which yes, did make me feel objectified. As I got older, I had a voice and would not work for companies that did this. Your agency needs to monitor this and not send girls to these types of jobs.”