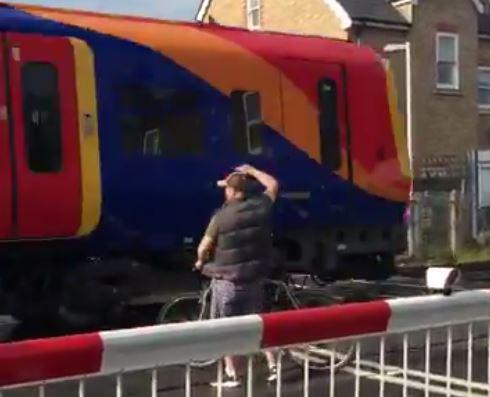 £2,000 reward offered to track down man who jumped level crossing gate with his bike

The charity Crimestoppers is offering a £2,000 reward to track down a man who jumped over a level crossing gate in south west London and told an onlooker who pleaded with him to stop, "I don't f*cking care, mate."

Footage of the incident, which happened in North Sheen last month went viral after it was retweeted by the broadcaster and cyclist Jeremy Vine on Twitter.

The level crossing at North Sheen today. Mate, the barrier is there for a reason. pic.twitter.com/LDlm2nLFRU
(via @laughingcow4)

The London Evening Standard reports that the reward is being offered because the train driver, who sounded its horn as it missed the man by inches, has suffered from psychological trauma.

Dave Hunter, head of operations at Crimestoppers, said: “This man could have caused himself serious injury or even death.

“His actions were incredibly dangerous. Someone will know who he is and we hope they will see that there is no excuse for this behaviour.

"The barriers are there for a very good reason.

“As an independent charity, Crimestoppers offers a safe way for people to give information about crime.

“We won’t ask for your personal details - you won’t have to give a statement to police or appear in court," he added.

"We just need to know this man’s name.”

The reward will be valid for three months and is only applicable to information shared with Crimestoppers, who can be contacted, anonymously, on 0800 555 111 or online at www.crimestoppers-uk.org