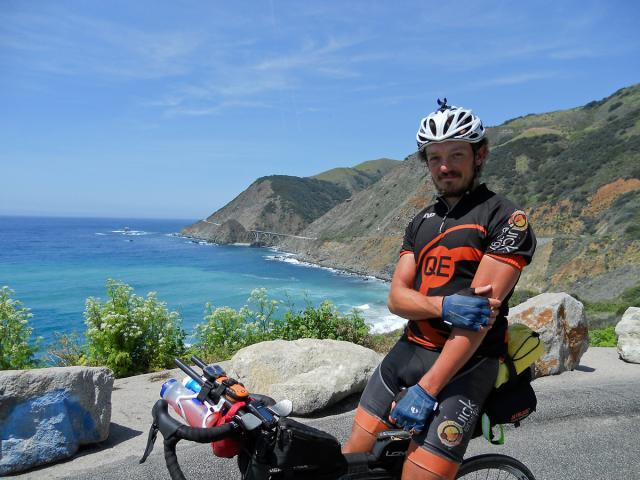 Juliana Buhring remembers her "mentor, kindred spirit" and above all, "friend," Mike Hall

“Had he not gotten me into unsupported adventure racing I would not be here," she said...
by Simon_MacMichael

Juliana Buhring has written an emotional tribute to Mike Hall, who was killed a fortnight ago today while competing in the inaugural Indian Pacific Wheel Race, and whom she described as a “mentor and a kindred spirit,” but above all, “my friend.”

Writing in Outside magazine, Buhring – like Hall, aged 35 – told of how they first met, how he had inspired her, and of the moment she learnt of his death during the coast-to-coast race across Australia she was also taking part in.

Hall was lying second in the race behind the Belgian rider Kristof Allegaert when he was struck from behind by a car near Canberra at around 6.30am on the morning of Friday 31 March.

Buhring was towards the back of the race at the time, having re-started the journey across the continent after an allergic reaction forced her to return to the start in Fremantle, Western Australia.

She heard the news of Hall’s death through a text from fellow ultracylist, Billy Rice.

“I rolled numbly along for a few more miles, in a state of shock and disbelief,” she wrote.

“Then it crashed into my gut like a sucker punch, knocking the air right out of my lungs, and I convulsed into hard sobs. It couldn't be true.

“Not Mike. Mike was immortal. The strongest of us. A legend in the world of ultracycling. He was my mentor and a kindred spirit. But most of all, he was my friend.”

Buhring, the first woman to set a Guinness World Record for the quickest circumnavigation of the wold by bicycle, said she first met Hall in 2012 in Bristol, where both of them were guests at the Bespoked show.

“We chatted about the loss of loves, the loneliness of the road, and the feeling of never quite being able to settle into a life of normalcy,” she said.

The following year, she was one of the riders who took part in the inaugural Transcontinental Race.

“When Mike decided to put on the Transcontinental Race across Europe, from London to Istanbul, in 2013, it became the race that launched ultra, unsupported road racing into the mainstream and birthed a growing community of bikepacking ‘crazies’ and their addicted following of ‘dot-watchers’ around the world,” she said.

“Had he not gotten me into unsupported adventure racing I would not be here, somewhere in the middle of Australia. Likely none of us would be.”

“He wanted to get people riding, to encourage people to get out of their comfort zone and have an adventure. He constantly pushed me to explore my own capabilities and limits, to take it one step further. He was the bar that I wished to raise myself to.”

Organisers of the Indian Pacific Wheel Race cancelled the event as soon as they became aware of Hall’s death.

Buhring said: “Riders were making their way to Sydney for a memorial tribute ride to Mike, scheduled for Sunday morning.

“I hitched a ride to Adelaide and caught a late Saturday night flight in to Sydney.

> One thousand cyclists ride in Sydney in memory of Mike Hall

“The street in Sydney was packed with hundreds of cyclists by 7:00 a.m. Only 11 of the 70 ‘Indy Pac’ racers had managed to get there in time and we huddled together, overwhelmed after so much time alone on the road.

“We rode in silent procession to the Opera House, each absorbed in our own world of emotions. Kristof Allegart, the Belgian ‘terminator’, climbed the steps and left a bouquet of flowers. Then we stood, more than 500 strong, in silence.

“The silence stretched into minutes as we each said goodbye to the man who had inspired thousands around the world to ride their bikes,” she added.

She said that afterwards, she “needed closure, a way to say goodbye,” and travelled to the location where he was killed with freelance photographer and journalist Troy Bailey, “the last person to see Mike alive before that fated morning.”

She said: “I wanted to know what Mike’s state of mind had been before the crash. Had he been happy, at peace?”

Bailey told her: “When I caught up with him, he was just coming up on the second climb into Cabramurra and we actually stopped and had lunch.

"He was in really good spirits. I asked him what his thoughts were about trying to track Kristof down and Mike just kinda said, 'Yeah, he got away from me last night and I didn't have it in me to chase him down, so I needed to have a rest.'

“But he was totally fine and in a good place. His exact words were, 'I don't need to win this thing'."

A fundraising page on Just Giving set up to support Hall's partner, Anna, and his family has so far raised  almost £80,000. You can donate here.