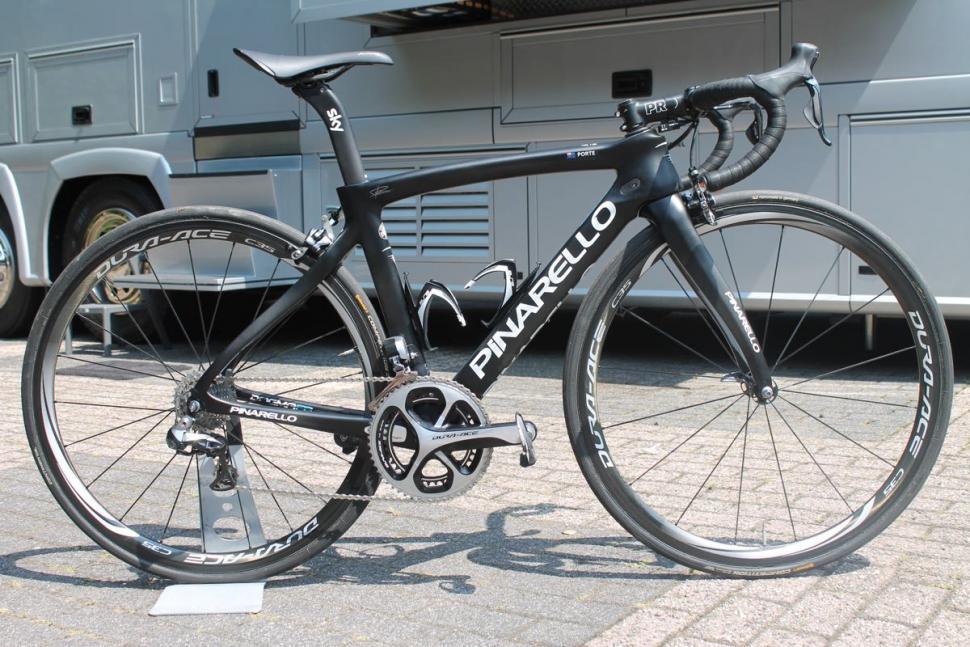 Tour de France 2015: 6 of the most interesting bikes

All the major bike and component manufacturers use the Tour de France to show off their most advanced race bike technology and every team wants to use those designs to gain every advantage possible. Here’s our pick of the most interesting tech on show in this year’s race.

The Trek Madone 9 Series was launched just ahead of the Tour de France, Trek Factory Racing riders having first raced the bike during the Critérium du Dauphiné. 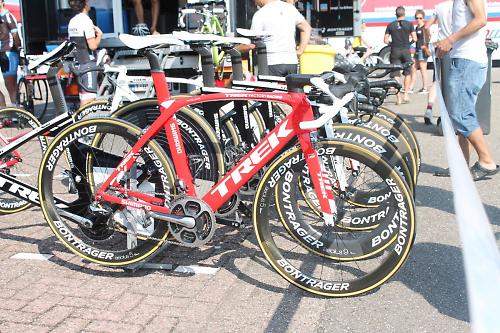 This bike is most interesting for its use of what Trek calls an IsoSpeed decoupler. The design comprises on an outer aero seat tube, and a skinnier inner seat tube. The two are rigidly bonded only at a point just above the bottom bracket, with a pivot between them at the top tube junction. 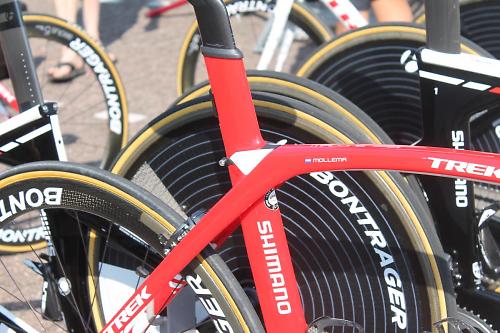 The idea is that the inner seat tube can flex to provide a degree of comfort. It’s technology that Trek first introduced on its Domane a couple of years ago.

The Madone also features loads of integration with the front brake, for example, designed to integrate with the fork, and the battery for the Di2 electronic shifting hidden inside the down tube.

This is the brand new Look 796 that we told you about last month. It hasn’t been officially launched yet so details are scarce, but the 796 has a front brake that’s integrated into the fork. The brake isn’t just sheltered by the fork, the brake arms sit within the fork legs/crown.

Rather than being mounted in a conventional position on the seatstays, the rear brake is mounted behind the bottom bracket 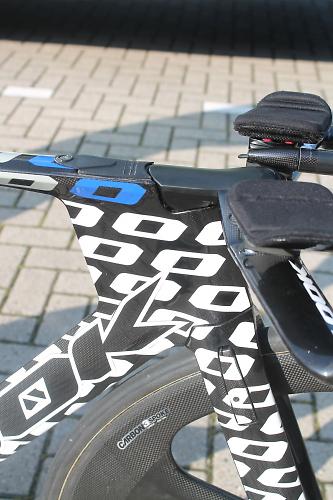 The 796 has a pan-flat top tube that leads into an integrated stem. It sits within the silhouette of the frame so as not to increase the size of the bike’s frontal area.

The only wire in sight is the one that runs from the end of the driveside chainstay to the rear mech. It looks like Look route cables and wires through the proprietary handlebar and into the stem, and then on into the frame.

The tube profiles are very deep, as is usually the case with time trial bikes, in order to minimise drag. 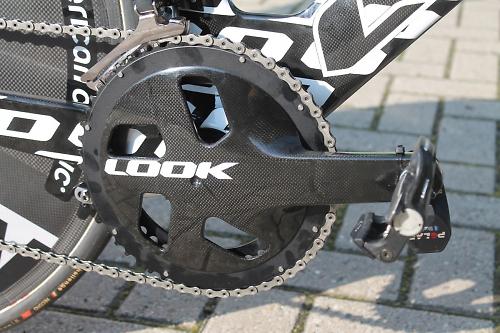 The chainset appears to be an aero version of Look’s Zed design and the American Classic Carbon TT 3 tri-spoke front wheel is one that we’ve not seen before.

Stage 4 of this year’s Tour saw the riders take on the pavé so FDJ broke out their cobbled classics’ bike, the Lapierre Pulsium, which features an elastomer in the top tube that’s designed to improve comfort. 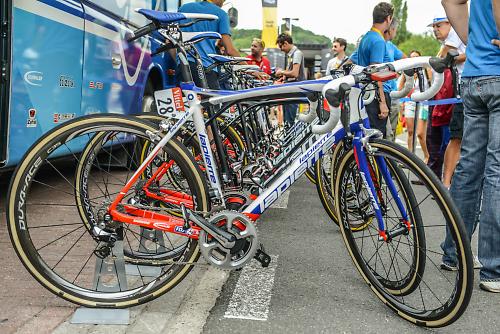 This bike has been around for over a year but it’s particularly notable in that the top tube divides in two before the junction with the seat tube. The lower section is split just in front of the junction and there’s a small elastomer ring in there that’s intended to absorb vibration from the road surface. 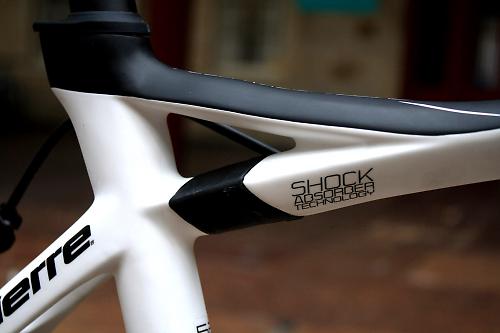 The upper strut is designed to flex enough for the elastomer to compress by a maximum of 3.5mm while acting like a brace to keep the frame laterally stiff.

Lapierre claims that the unique top tube design leads to increased grip and stability on rough roads and less physical stress on the rider.

Lotto-Soudal’s sprinter Andre Greipel has won three stages in this year’s Tour de France on the Ridley Noah SL which was first revealed about a year ago. 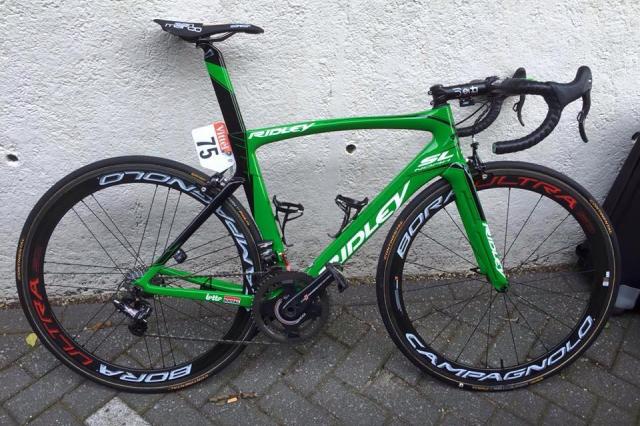 A key feature of the Noah is the use of moulded strips at certain areas of the frame. Ridley calls this its F-Surface treatment. Raised strips are sited at the leading edges, the idea being to delay flow separation and keep the air ‘attached’ for as long as possible. 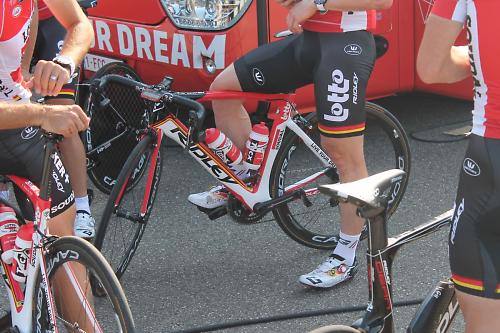 The thinking is that when air separates from the surface a small area of low pressure is created and that produces drag. The longer the air remains attached to the surface, the lower the drag. The idea of the F-Surface is to trip the passing air into turbulence, shifting the separation point further along the tube profile.

Another important feature is the F-Splitfork. Two slots run vertically on each fork leg, one above the other, so each leg has a small gap down the middle.

The idea here is to allow air to flow through these slots, reducing the air pressure between the fork legs and the wheel, again to reduce drag.

The Pinarello Dogma F8 is designed to be both lightweight and aerodynamically efficient.

Frame elements are made to Pinarello’s FlatBack profiles. Like many other manufacturers, Pinarello takes an aero-shaped tube profile and chops off the trailing edge. This is intended to maintain most of the tube’s aero performance while saving weight and keeping within the UCI’s regulations. 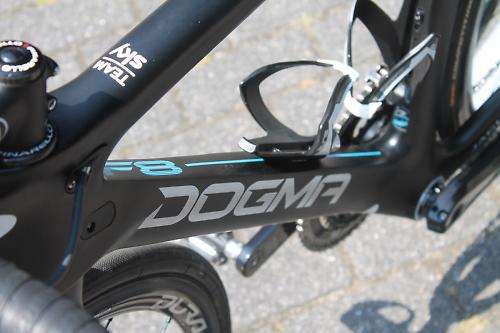 The Dogma F8 also incorporates other aero features like a fork crown that’s integrated into the frame, a down tube that’s shaped to hide the water bottle from the airflow, and a rear brake that’s hidden by the seatstays. 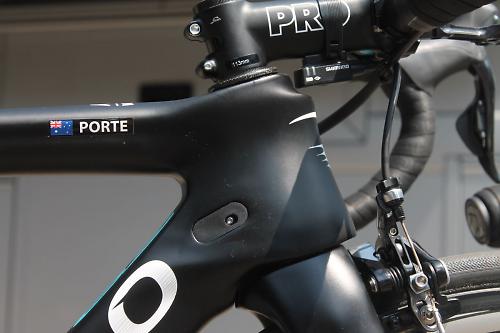 The frame is made from Toray T11001K composite and weighs around 860g in a 54cm size, according to Pinarello.

The seat tube, down tube, top tube and rear triangle are all built asymmetric because the driveside of the bike has to handle different forces from the non-driveside.

It’s not so much the frame or the fork of AG2R’s Focus Izalco Max that’s particularly noteworthy, it’s the fact that the team are using SRAM’s yet-to-be-released wireless shift system. 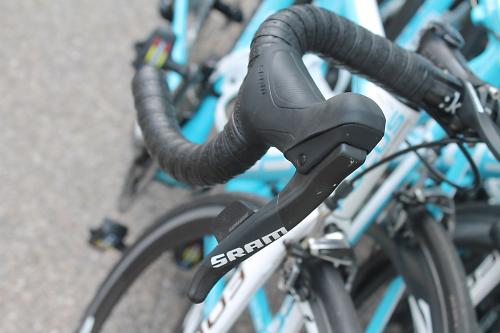 Shimano has offered its Di2 electronic shifting for several years now and the same is true of Campagnolo and its EPS systems, but SRAM has yet to release anything similar. That looks set to change in the not-too-distant future. 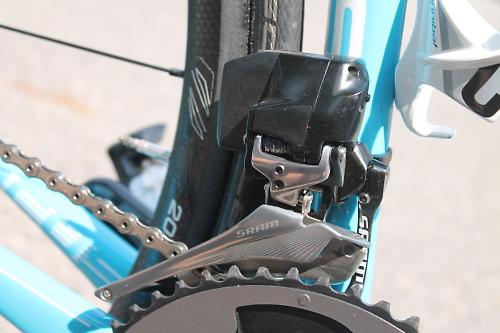 The difference is that while Shimano and Campag both use a central battery and connect their individual components with wires, SRAM’s system is cable-free. Each component is powered by its own small battery. 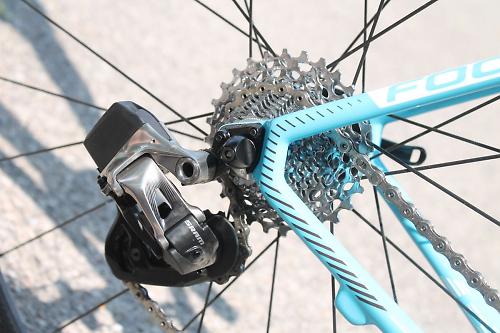 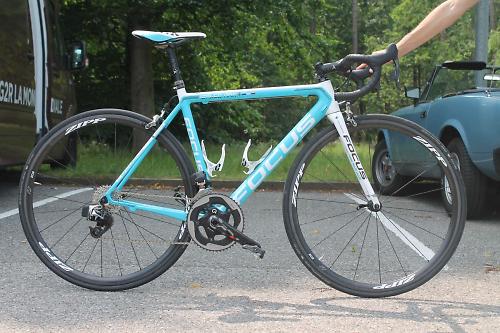 SRAM’s wireless groupset looks pretty much like a finished article rather than work in progress, so we’re expecting a fullscale launch soon.