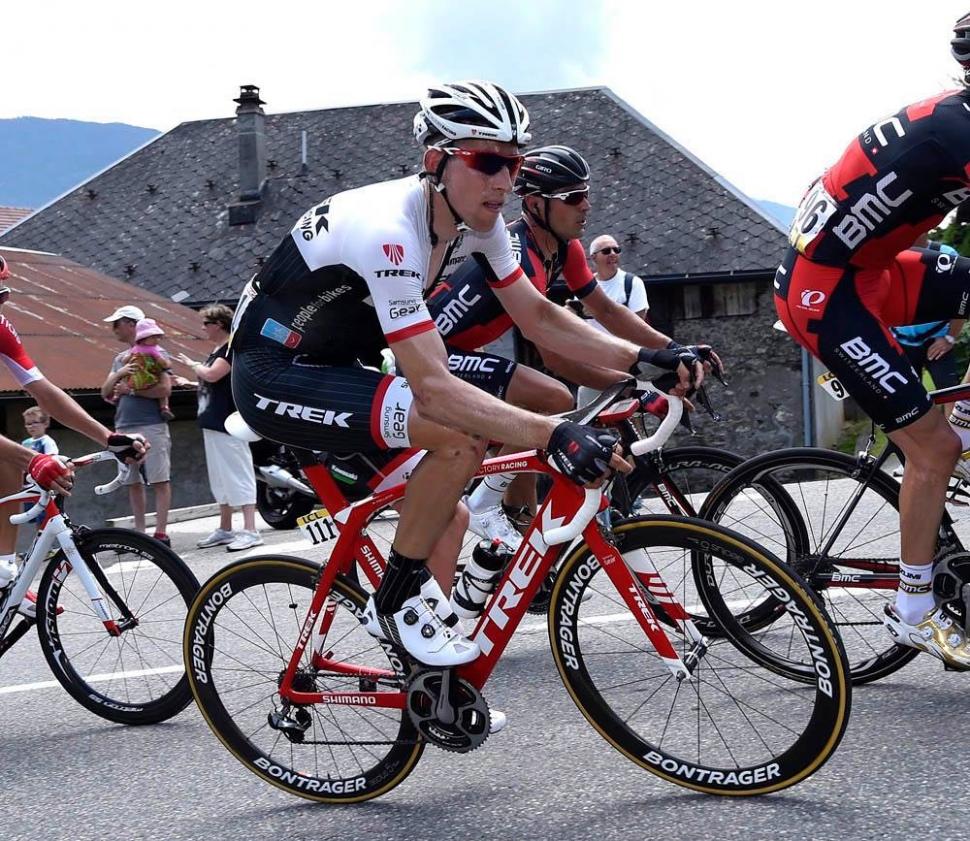 Trek is about to launch a new Madone 9 Series road bike which members of the Trek Factory Racing pro team are currently riding at the Critérium du Dauphiné. It looks like the bike incorporates Trek's IsoSpeed technology to improve comfort.

Trek is currently saying nothing about the new bike but we know it’s a Madone 9 Series because that’s the only model from the US brand that has recently been added to the UCI’s list of approved frames. For the same reason, we know that the bike is equipped with a Madone KVF full carbon E2 fork.

Trek has a history of officially unveiling new high-end race bikes just before the Tour de France, so that looks likely again here.

What details can we glean in the meantime?

Well, when Trek launched the Emonda last year it made clear that its road bike lineup would be divided into three for the foreseeable future: the Emonda for those prioritising light weight, the Domane for those after comfort, and the Madone for those wanting aerodynamic efficiency.

The designers have clearly moved the aerodynamic technology forward with this new Madone.

Check out the down tube on the individual rider (Bauke Mollema) shot. It looks much deeper than on the current Madone, presumably for improved aerodynamic efficiency.

It appears as if the front brake is positioned in a recess in the fork, and the brake calliper looks unlike any that we’ve seen before. We’re guessing that it’s a proprietary design from Trek’s in-house Bontrager brand.

The UCI list says that the fork is E2, and in Trek parlance that means that it has a standard 1 1/8in upper bearing and a 1 1/2in lower bearing. The idea, of course, is to add stiffness for precise cornering.

The UCI list also describes the fork as ‘KVF’. That stands for Kammtail Virtual Foil and means that the profile is aerodynamically shaped but with the back end chopped off square to save weight, improve handling, and stay within UCI equipment rules. It's a shaping concept that Trek first introduced on its Speed Concept time trial/triathlon bike.

Even more interesting is the junction between the top tube, the seat tube and the seatstays. There’s something unusual going on there and we’re guessing that it has something to do with Trek’s IsoSpeed technology that's already in use on the Domane range.

In brief, IsoSpeed is a ‘decoupler that isolates the movement of the seat tube from the rest of the frame’ – Trek’s words. It’s easiest if you just watch the video:

By the look of things, Trek is adding something similar to the new Madone.

Look closely and you can see that Trek has moved the Madone’s rear brake from underneath the chainstays back up to a traditional position on the seatstays. We don’t know the brand’s reasoning for that. The new bike also features an aerodynamically shaped seatmast. 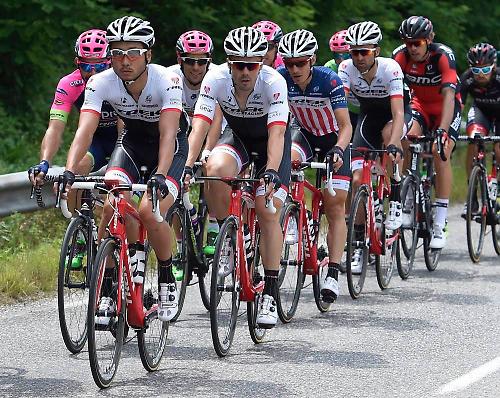 Look at the second Trek bike in the group shot and you can see just how small the frontal area of the handlebar is. Go back to the individual rider shot and it’s clearly a one-piece bar and stem.

What you can’t see are any brake cables and the only Di2 wire on show runs from the back of the chainstay to the rear mech. It looks like everything is internal, including the Di2 junction box.

That’s about all we can make out for now. We’ll keep our eyes peeled for more details over the rest of the race.