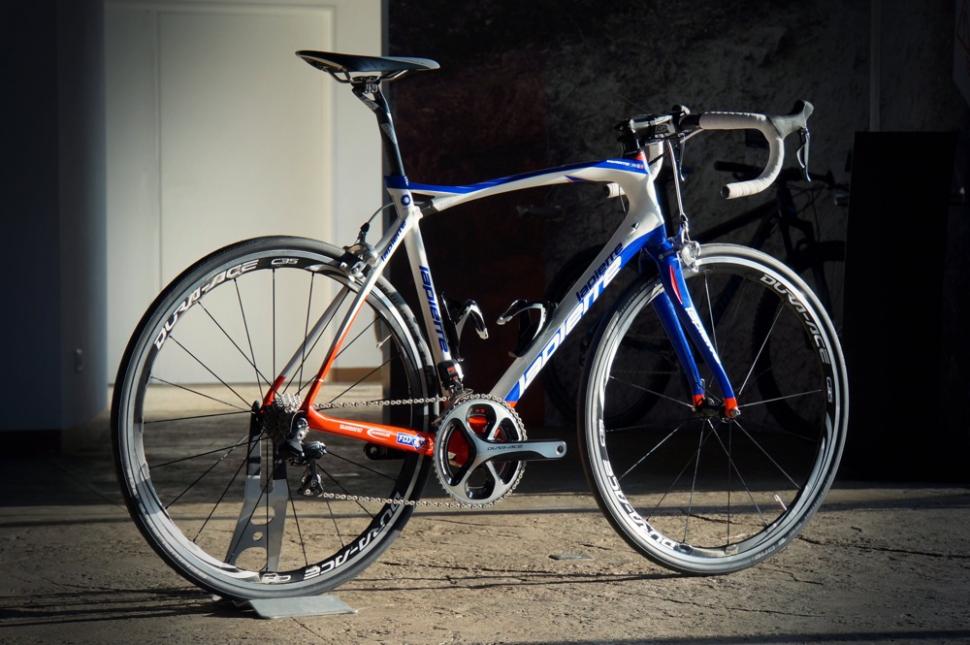 Lapierre is launching a new endurance bike called the Pulsium that uses an elastomer in the top tube designed to improve comfort. The bike saw its first real racing at the Grand Prix E3 Harelbeke last weekend with FDJ.fr riders putting it to the test on the streets of Belgium.

Many brands have an endurance road bike in the lineup these days, designed to be more comfortable than a standard road bike. Specialized has the Roubaix, for instance, Trek has the Domane, Merida has the Ride, and so on. Sponsored pro teams use these bikes, or have the option of using them, for the Classics, particularly those that take in cobbled roads.

The most noticeable feature of the Pulsium is the elastomer ring in the lower of the two joints between the top tube and the seat tube. Lapierre says that it acts as a shock absorber to dampen vibration from the road.

“Thanks to the elastomer ring, the new construction with specific carbon layup and the endurance geometry, the Pulsium is a frame that cannot be beaten at absorbing uneven terrain and preserving its rider’s energy,” says Lapierre.

Although the shock absorbing feature is in a similar place, the design is very different from that of the Trek Domane. There, the seatpost is able to move independently of the top tube and seatstays. With the Pulsium, the different elements are still connected, just with the addition of that elastomer.

You know how much we love a performance statistic here at road.cc and Lapierre doesn’t disappoint on this front. The French brand says that the Pulsium offers 27% more vertical flex than the existing Sensium. It claims that this results in more grip and stability on rough roads and less physical stress for the rider.

Lapierre says that the curved top tube flexes more easily than a straight one while the curved and narrow seatstays act like leaf springs for better impact and vibration absorption at the back end.

Up front, the carbon layup of the fork is designed to increase the flex capability and the absorption of vibration. A larger than normal offset (50mm) is, again, intended to dampen vibration from the road.

Lapierre says that all the carbon fibre that it has used in this frame is 40 ton tensile modulus or below, with 24 ton and 30 ton fibres being used for better resistance to impacts and increased vibration absorption (there it is again!).

The chainstays are 4mm longer than those of the Xelius EFI and the same as the Sensium’s. Lapierre say that this provides stability and shock absorption.

The rear brake comes with an adaptor so you can run either short or long reach calipers. Go for long and you can use tyres up to 32c.

The seatpost clamp is integrated into the frame. The seat tube bulges out behind the seatpost to accommodate a wedge system, the idea being to provide a more aero solution.

Lapierre says that it has integrated its Power Box technology into the Pulsium. In short, that means the lower elements of the frame – the head tube, down tube, bottom bracket and chainstays – are designed for stiffness while the upper elements – the seat tube, top tube and seatstays – are designed for comfort. In terms of lateral stiffness, Lapierre says that the Pulsium is equal to the Xelius EFI.

“It offers incredible vertical flexibility while keeping the lateral rigidity that’s indispensable for a race bike destined for the UCI World Tour,” according to the brand.

The Pulsium will be in the shops from July but Lapierre is not releasing details on builds or prices yet.