We’ve already published a news story on the new Madone that explains the key design features, so check that out for all the details. 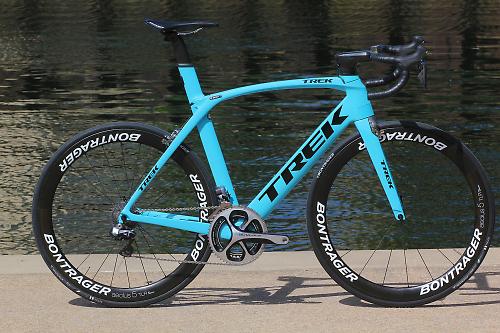 In brief, the key things you need to know are these:

• Trek says that by using Kammtail Virtual Foil (KVF) tube profiles for the frame tubes, fork legs and seatpost it has been able to produce the fastest aero bike out there. 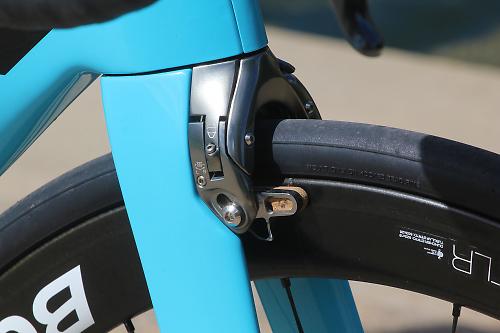 • The new Madone features a huge amount of integration including proprietary brakes, fully internal cables/wires, and a hidden Di2 battery and junction box if you go for electronic shifting. 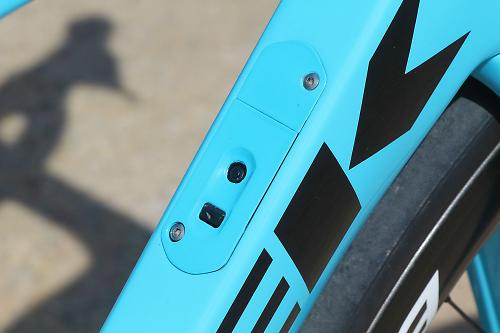 There are many other technical features to this design so do check out that article for the full picture. I spent a couple of days with Trek at its HQ in Waterloo, Wisconsin back in May to check out the new Madone, get the full story from the designers, and ride the bike. My Garmin says we rode for 1:20hrs on the first day and 3:30hrs on the second day. That second ride was fairly hilly with 1,300m of elevation gain. It was mostly rolling countryside with a couple of longer climbs thrown in. 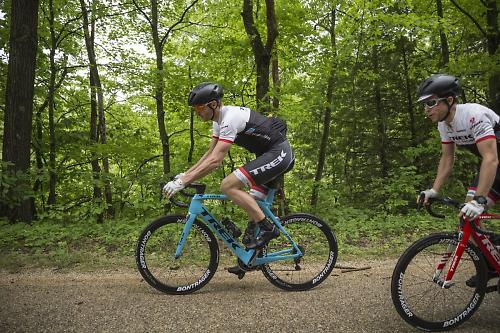 What I can’t tell you about from that ride is the Madone’s aero performance – that’s impossible. I’d suggest you check out the Madone Whitepaper that Trek has produced for all the details there (if it’s not already there, it’ll soon be published on Trek’s website www.trekbikes.com). It tells you how Trek went about the design process and how the engineers arrived at the finished product. 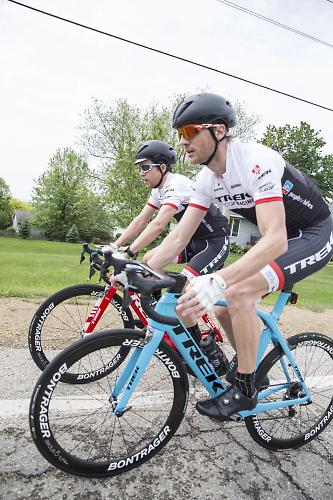 I can tell you about the IsoSpeed decoupler. This is a system borrowed from the Domane that allows the seat tube to move independently of the rest of the frame.

Let’s be honest, some aero road bikes can feel pretty harsh because of the aspect ratios of the tubes. Deep-section tubes often don’t flex much at all so you feel every little irregularity in the road. 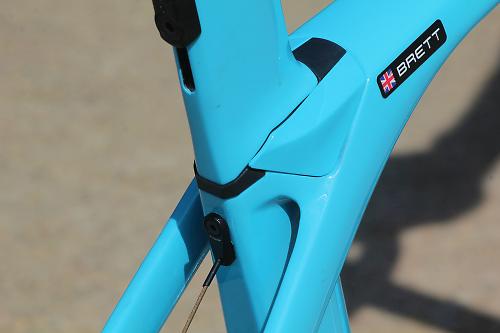 To cut a long story short, the IsoSpeed decoupler works. The amount of saddle movement you get from IsoSpeed isn’t huge, but it is appreciable. There’s just a small amount of give there that keeps the ride feeling smooth and takes the edge off bigger hits. Cast all thoughts of mountain bike suspension from your mind. It’s nothing like that; not even close. It’s just a touch of cushioning to cancel out road buzz and round off the spiky bits.

If you want a figure, Trek claims that the new Madone offers “an incredible 57.5% improvement in vertical compliance over the nearest competitor”. Everyone loves a marketing figure, right?

Personally, I found the Madone to be really comfy, especially for an aero bike. I’ve not had the chance to ride it all day long, but I felt good in the saddle at the end of that 3:30hrs ride I mentioned. The 25mm Bontrager R4 tyres doubtless helped there, and there’s enough room for you to fit 28s if you want an even larger chamber of air between you and the road, but the IsoSpeed system is certainly doing a job. 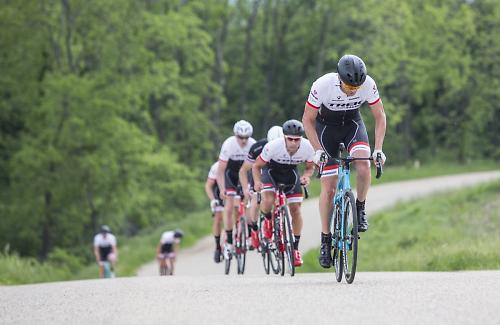 The Madone whips up to speed very quickly. The 58cm bike I was riding, built up with a Shimano Dura-Ace Di2 groupset and Bontrager Aeolus 5 TLR wheels, weighed in at 7.0kg (15.4lb, without pedals). Trek’s Émonda is lighter but, as you probably know, aero beats weight in most situations (yes, it’s more complicated than that, but let’s not get caught up in that debate here). The point is, the Madone is quick off the mark and it climbs well, the huge bottom bracket barely budging when you get out of the saddle to eke out a bit more power on the steep sections. 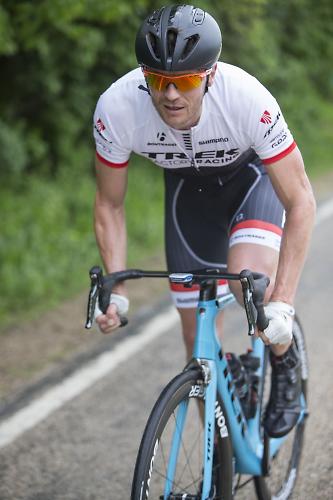 I’d say that the bike is perhaps an even more impressive descender. Any bike can go downhill well in a straight line but the Madone is also a class act through the high-speed bends, offering excellent accuracy and a really controlled feel. I don’t think that I found its limits on our two rides. 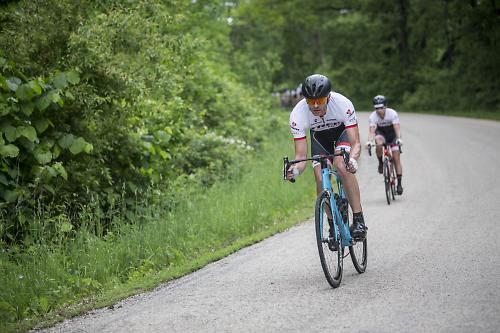 Bontrager’s direct-mount centre-pull brakes felt good too. The bite on the carbon-fibre rims wasn’t as strong as you get with aluminium, but that’s always the case. Our rides were dry so I can’t comment on the performance in wet conditions, but I always felt in total control here. 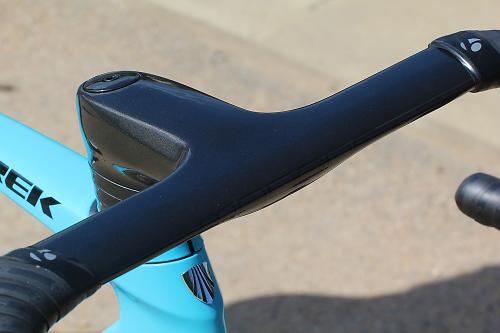 One other component that’s worth mentioning is the combined handlebar and stem. As you can see from the pictures, the profile of the top of the bar is super-thin, so the frontal area is small. I think it looks super-cool but I did wonder whether riding with my hands perched up there would be uncomfortable. It turns out that’s not the case. You get a big palmful of bar to hold on to and the trailing edge – the bit your thumb hooks round – is squared off rather than pointed. I wouldn’t say it’s quite as comfortable as a round bar, but it’s not going to bother you. 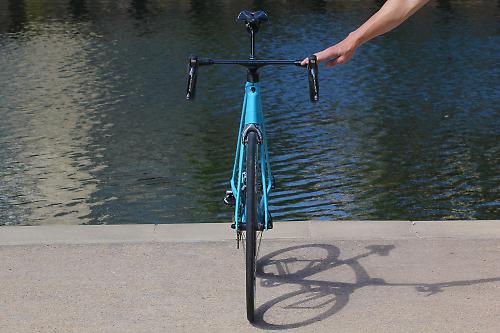 You can see hardly any cables/wires on the new Madone; they’re all hidden away internally. The same is true of the Di2 battery and junction box if you opt for a model with electronic shifting, although you can still access the button that fine-tunes the shifting via a little window in the down tube. If you opt for a bike with mechanical shifting you get a barrel adjuster located in that position instead. If you want to bring the brake pads in closer to the rims, though, that’s an Allen key job; you can’t do it on the fly. 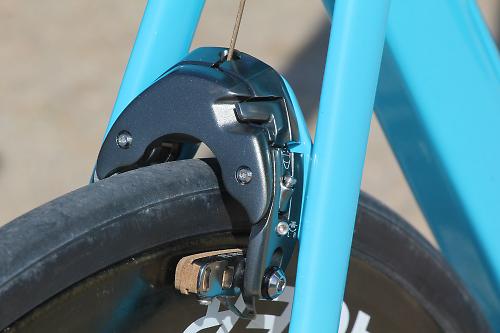 The Madone that I rode was put together through Trek’s Project One custom bike programme although it’s pretty much the same spec as the Madone 9.9, which also comes with a Shimano Dura-Ace Di2 groupset and Bontrager Aeolus 5 wheels. That bike retails at £9,000. The difference is that I had my frame painted in road.cc colours rather than going for a standard finish.

Go to our other story for other Madone 9 Series prices.

So, my initial ride impressions are very positive. I think that Trek has produced a peach here. How easy it is to maintain, I’ve yet to discover. Changing a brake cable looks complicated, but perhaps I’ll be surprised. We now have this bike at road.cc for a full test, so I’ll cover maintenance stuff in that, once I’ve got my fingers oily.

In the meantime, go to www.trekbikes.com for more details.