We had a long old schlep up to Harrogate last week to have a look round the 2010 products that distributor Zyro will be bringing in. It was definitely worth the trip: as well as seeing a bunch of good-looking new stuff, they thoughtfully provided air hockey and table football based entertainment as well.

Some of this stuff we'll cover in more detail later, and all of it is on our testing wishlist, so as soon as the products come in (a lot of the things we saw were samples) we'll put it through the road.cc grinder and tell you how it performs. Anyway, here's a quick rundown of the things that caught our beady eyes. 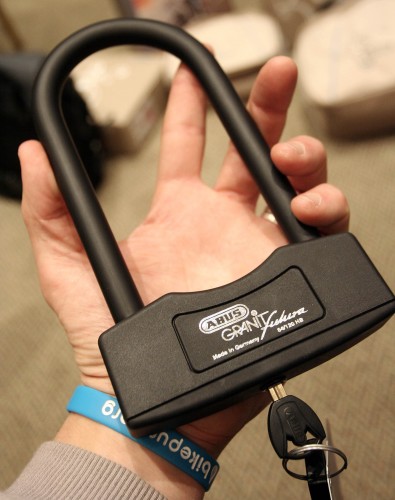 Abus had plenty of new stuff on show. First up was the genuinely tiny Futura U lock, which is designed to fit in a hipster's pocket. We can vouch for the first, but we haven't been at it with the persuader yet so we'll wait and see on the second. Colour is also playing a big part in next year's lock range with plenty of the chain locks, including the Ionus and the combination Tresor (which we'll be testing) available in some nice bright shades. If you're looking for a few hefty locks to secure the contents of your shed then for an extra 10% on top of the normal price Abus will make up as many locks as you like with the same key combination so you don't have to fumble around with a big bunch of keys that look the same.

Abus are also growing their range of helmets. It's good to see companies bringing their top end technology down to the kid's market: lids such as the Super Chilly (which we'll be testing soon) feature in-moulded shells and adjustable retention systems, as well as an LED light in the adjustment knob. They're also making a proper fully featured race lid for kids, the Chaox. 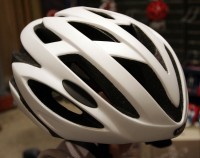 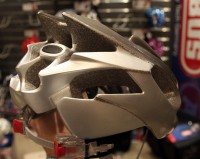 On the road side there are two nice-looking lids at the higher end. The S-Force is a more rounded profile whereas the more expensive Tec-tical is more agressive and also features an Aluminium skeleton inside the mould for extra strength. For commuters the Urban-I has a less sporty shape and a visor to keep the rain out of your eyes. 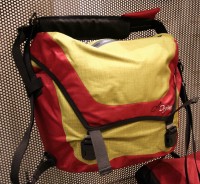 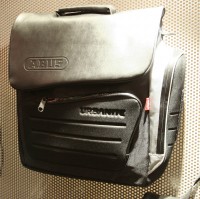 Abus have been working hard on their bags too: There's a new messenger bag, the Dryve, made from a fully waterproof nylon fabric. Abus have redesigned the clasp so it's easy to adjust the strap length but hard to accidentally release it, and you get a waterproof phone pouch with a window, which is a nice touch. There's also a range of city bags, the Urbanites, which are designed to hold your laptop and prawn sandwiches as you swan around the city. Ladies are catered for with two very classy looking ranges which have great touches such as stowaway handles and separate lock compartments. 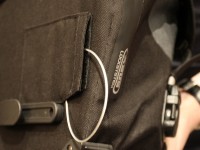 Altura had a bunch of new clothing and bags to show us. Unfortunately it was a bit dark in the clothing room so we don't have any pics to show you but the big news is that Altura are extending their range upwards with a sub-brand, ergofit. The top shorts will be £100 and has the mix of 3D liner, compression fabrics and contoured fit you'd expect from a high-end short, they look the real deal. There's tops to go with the new higher end stuff, plus a nice black and white retro effort (not in Merino though). Also new is the Transformer top, a lightweight windproof that has a zip-off sleeve and back panel section which turns it into a jersey. More versatile than a normal jacket with removable sleeves, it looks just the ticket for chilly summer mornings. We'll be running a full story on the new Altura clothing range soon. 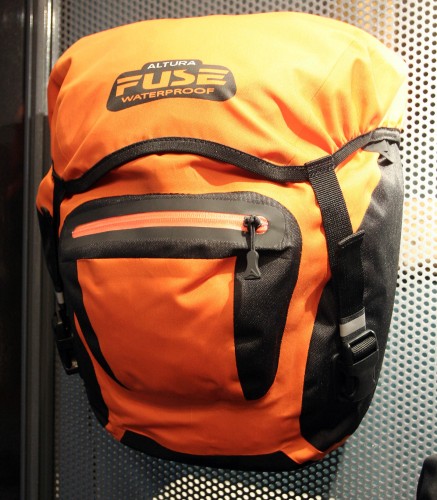 Bag-wise Altura are sticking with the low-end, high-volume bags and twisting further up the range. New for this year is a range of waterproof bags that use an ultrasonic welded technique to seal the fabrics together. They're very light and waterproof, and come with Rixen and Kaul fittings. The top end Fuse bag will retail for £110 (42 litre) or £100 (32 litre), below that there's a simpler Arc bag and a new version of the Night Vision using the same technology. 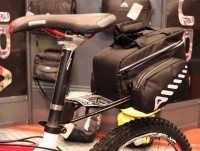 Altura showed us their new Post Pack too which looks like a great option for carrying small loads on Audax/Sportive rides, or on any bike that doesn't have pannier fittings. The bag has an integrated frame like last year, which clips on to a mount fitted to the seatpost. It's a bit like a more compact quick release pannier rack,. There's a sleeker aero bag this year and a Night Vision version too.

Cateye had a few new computers on show. The Adventure has a pressure-based altimeter which can keep track on your climbing and also gives you a gradient readout, although like we said at the launch, if you're compos mentis enough to read the numbers then it clearly isn't steep enough. 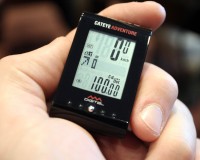 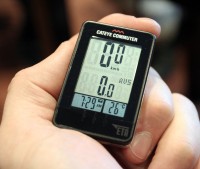 The ETA commuter computer was the other big news - as well as offering a carbon offset function for all you muesli-munching environmentalists out there, there's also an ETA function: once you've done your commute once you can commit it to memory and it'll give you an estimated time of arrival based on your speed, and a bar graph across the middle of the screen showing your progress. Sadly it doesn't run to a Garmin-esque race yourself function, but it is only a fraction of the price. Cleverly it includes a calendar function so you can view your total commuting distance month by month or week by week, and you can lock the backlight on for those winter commutes in the dark. It'll be available from April. 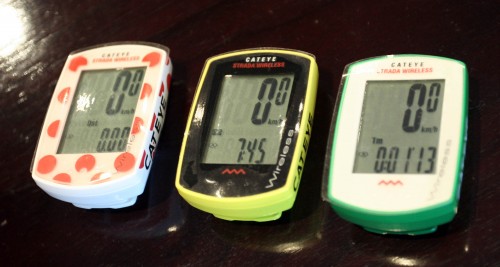 The Strada continues to be a big seller - this year you (Jo) can have it in pink, and also in green, red polka dot and yellow. Not that that has anything to do with a certain race in France in July. Oh no. They're 'jersey-themed', apparently... 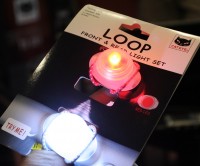 Light-wise Cateye showed us the EL-020 hybrid, which has an integrated solar panel with a dedicated battery as well as an AA backup. You can run the light from either power source and there's a blue glowing strip to tell you when you're on solar. They also had the excellent loop lights which are bigger than most backup lights, hard to accidentally switch on and visible from all angles. The Orbit spoke light was another nice product: it looks like a reflector, so you're unlikely to have it nicked, but switched on it has an orange glow that gives you good visibility from the side. 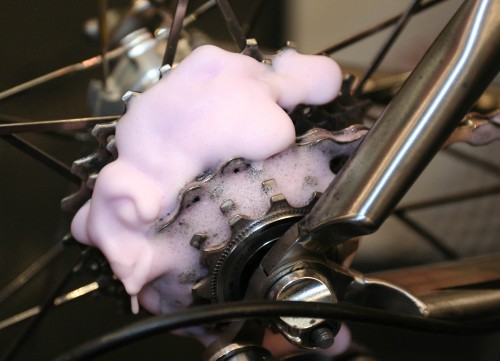 Big news from Fenwicks was their FS foaming degreaser, which was natty enough that we committed it to video, keep you eyes peeled for that one. There's some changes to the range other than that: the FS1 bike cleaner gets an ergonomic new bottle, and Fenwicks are making a spray lube and 'frame and shock finishing spray' to keep your steed looking snazzy. Lube-wise there's three in the range now: dry conditions, wet conditions (with added long chain polymers for extra tenacity) and all conditions which falls between the two. 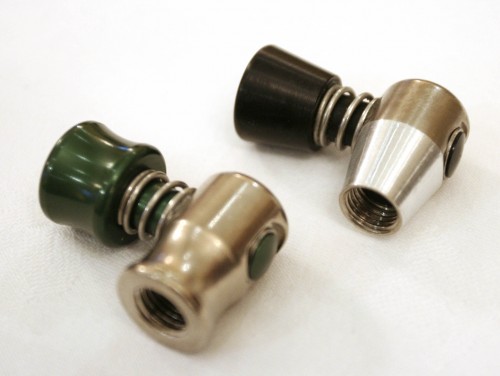 Innovations had a new version of their Air Chuck Elite on show, which has slimmed down considerably for 2010 – not that it was ever likely to weigh you down that much. They also now make black anodised CO2 cartidges which are a stylistic improvement over the shiny metal ones, even if there's no functional advantage.

They also showed us the Proflate 16, which has a couple of neat touches. The first is a pressure lock: when you fit a cartridge and break the seal, a pressure switch pushes up a small locking mechanism so you can't unscrew the holder and release all the gas. There's also a dust cover that also acts as a lock to the main trigger: unless you've got the cover open (ie the Proflate is on a valve) you can't inflate, so it won't accidentally go off in your pocket. The trigger is very sensitive too, allowing you to release a bit of gas to make sure the valve is connected properly before you got at it full pelt. 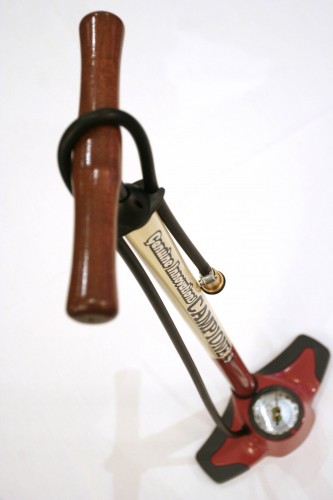 Last up was the Campione track pump, a nice retro offering with a long stroke and a big, easy to read gauge. 100psi into a 20c tyre took just 17 strokes, and the pump is rated to track pressures for all you board-treaders out there.

Big news from Powerbar was their Natural Energy bar, which comes in a range of flavours and is a slower release product than the traditional bars, made from all natural ingredients. It's a low fat bar – the fats coming from the seeds in the bar, so they're good fats anyway – and the bar is fairly soft, held together with a glucose syrup. Mr Powerbar assured us that it didn't go hard on cold rides either. 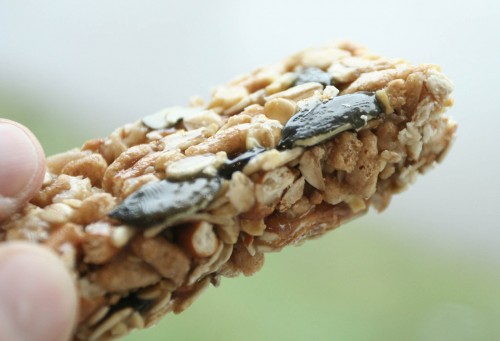 Favourite flavour among the assorted road.cc and Singletrack guinea pigs was probably the Sweet 'n' Salty flavour, which bungs a bit of pretzel and some sunflower seeds into the mix so it's a bit different to a fruit/chocolate based bar, and a nice change. That slow release energy helped us on the sapping 5hr drive back from Harrogate, too... 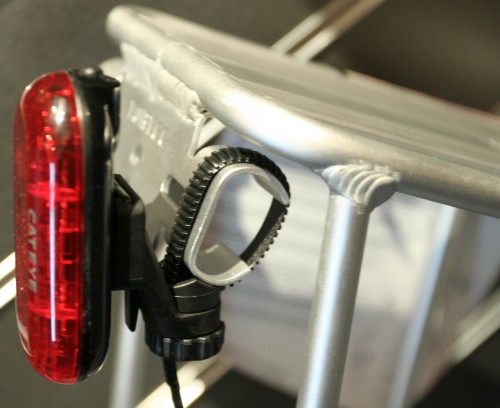 You'll probably know Tortec (if you know Tortec) for their racks, and they've got some new ones this year. Most interesting was the new light bracket they're fitting to all new racks. It continues to offer the bolt fixing that dynamo units use, but on either side of that there's an Aluminium section bent into a loop that's designed to hold any rear LED with a flexible clamp (for example most Cateye units). It's a simple and clever solution and it allows you to fit two or even three LEDs on the back of your rack for extra visibility. 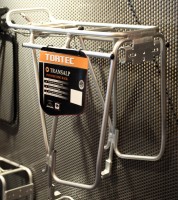 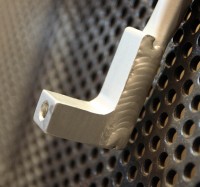 Tortec also showed us their Transalp rack which is designed to work with disc brake equipped bikes. The rack has a right angled strut at the bottom which locates the rack further out from the dropouts and avoids fouling the disc mechanism. We were a bit worried that the design would mean extra stress on the dropout, but Tortec assured us that they'd tested them to the standard 25kg load with no issues.

As well as racks, Tortec are diversifying a bit - there was a couple of alloy bottle cages, the dearer one being designed to hold bigger bottles (and bottle batteries). It was a sturdy thing indeed with a 6mm alloy frame. They also had a couple of neat storage hooks for the garage/shed complete with a built in plate to keep your wheel off the wall, not that that's much of an issue in your garage or shed.