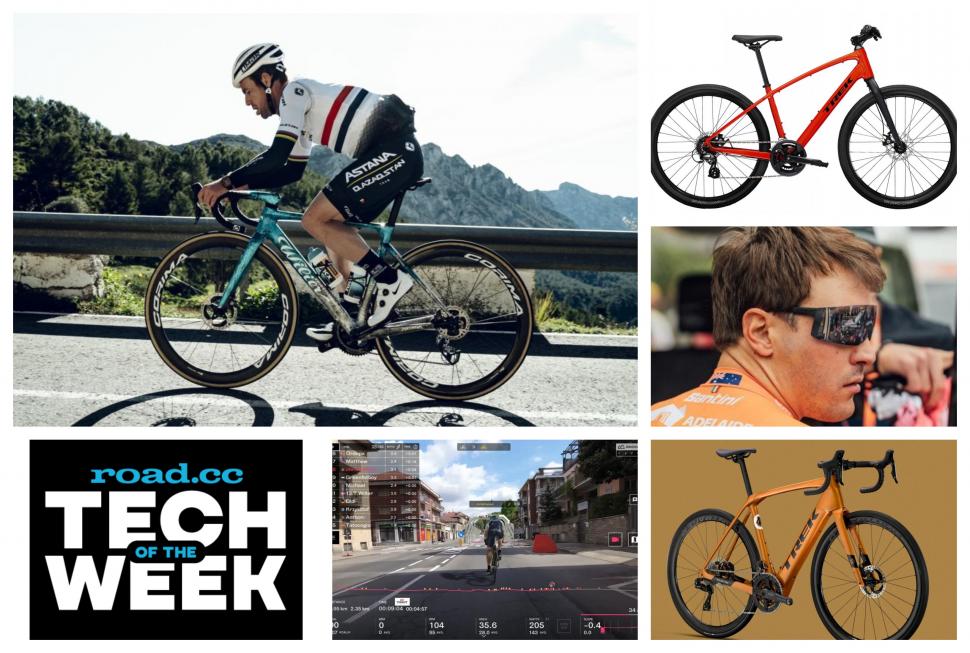 Take a look at all of the week’s tech news from Trek, Giant, BKOOL, Van Rysel and more
by Mat Brett

We need to let you know about updated bikes from Trek, a just-introduced Giant delivery service, unreleased glasses from Poc, and a rowable bike that was soundly panned on the BBC’s Dragons’ Den, but we’re kicking off with Mark Cavendish’s new Wilier and his mysterious Nike shoes...

Everyone now knows that Mark Cavendish will be racing for Astana-Qasaqstan in 2023, and here are the first pictures of him on his new Wilier Filante SLR team bike… complete with Nike-branded shoes that aren’t in the Nike range. 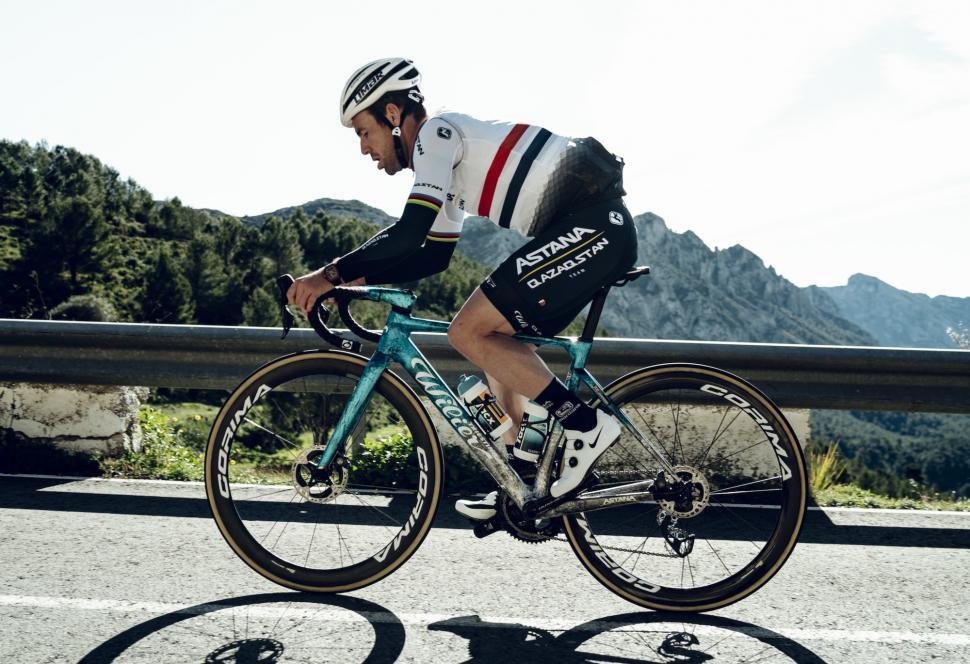 Astana-Qasaqstan riders choose between the super light Zero SLR and the aero but still lightweight Filante SLR for road stages.

The Filante is the gorgeous model that won the Money No Object award road.cc Recommends Bikes of the Year 2021/22.

> Read our review of the Wilier Filante SLR 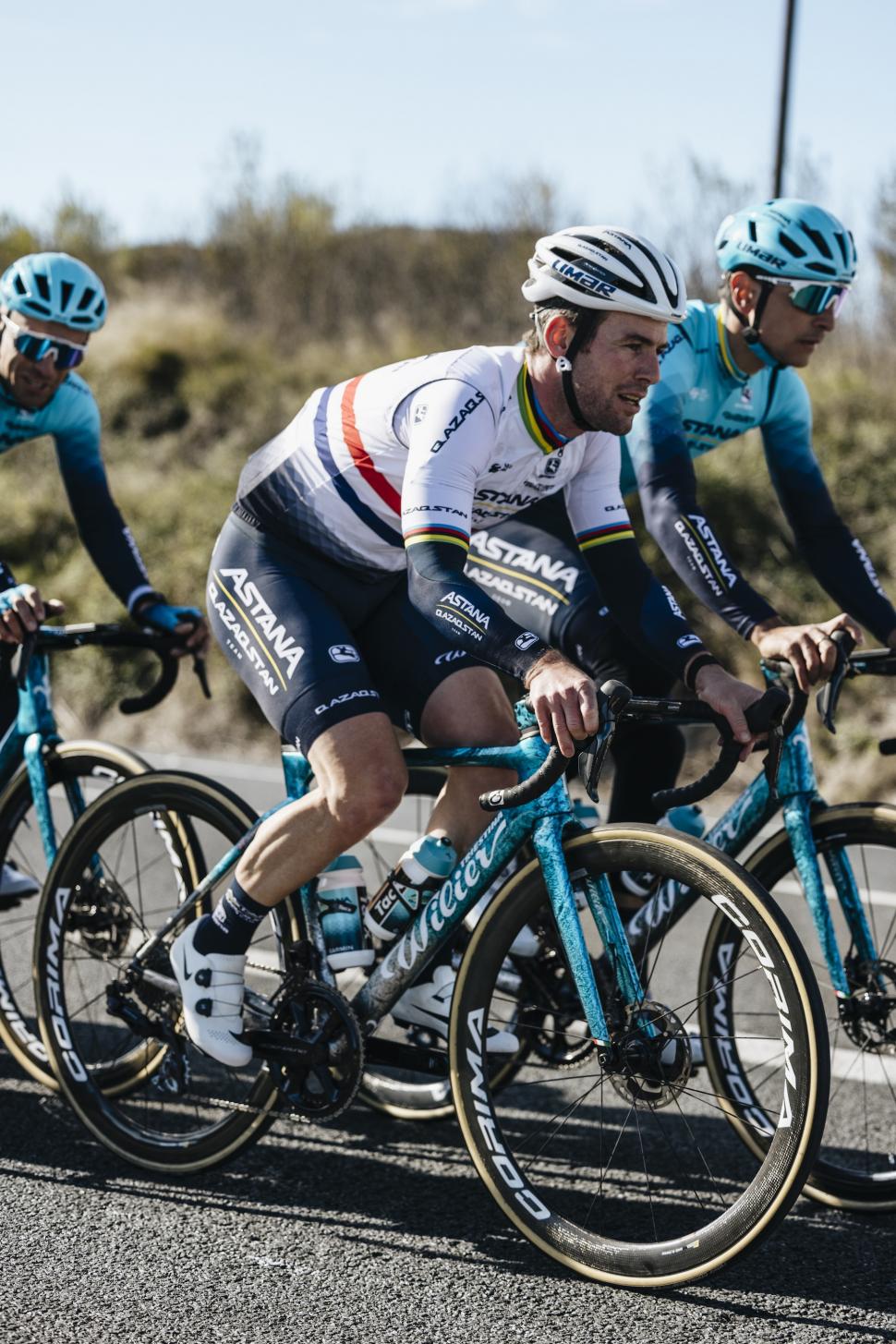 Astana-Qazaqstan’s Wilier Zero SLR and Filante SLR race bikes have been given a ‘chrome-plated graphite’ finish for 2023. We’d say these are the coolest-looking bikes in the WorldTour this year. Astana-Qasaqstan riders use Shimano Dura-Ace R9270 groupsets – with SLF Motion Speed System pulleys on the rear derailleur – and wheels from French brand Corima.

What about those shoes, though? Cav has an association with Nike going back years. While at Deceuninck-Quick-Step for the past couple of seasons, the veteran sprinter rode in Specialized shoes but it looks like the switch to Astana-Qazaqstan has freed him to go back to racing in Nikes. 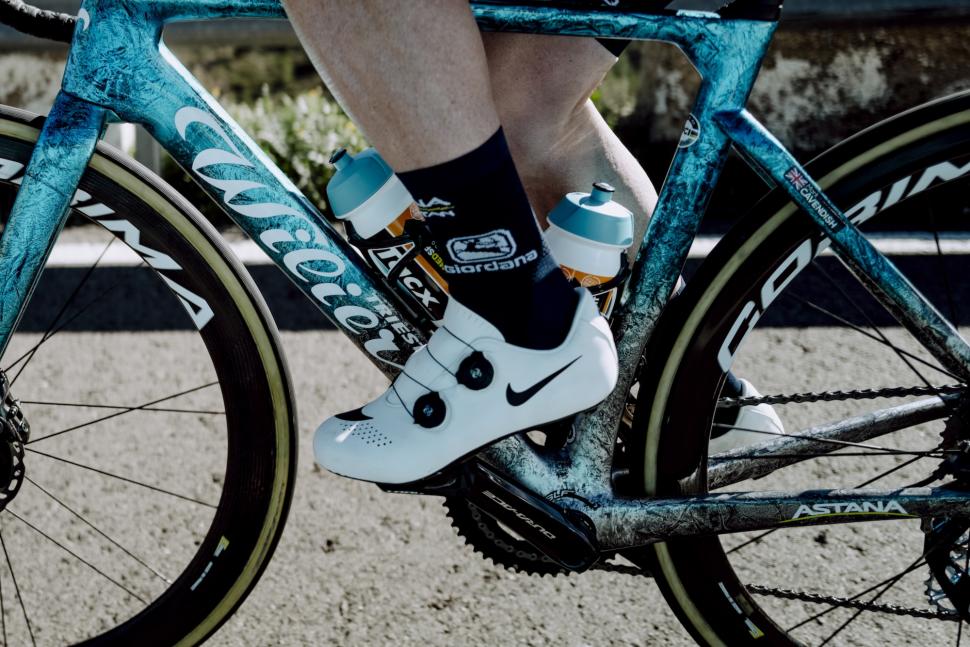 Although Nike has made road cycling shoes in the past, the shoes on Cav’s feet aren’t in the current range. In fact, the current range covers indoor cycling only. Rather than trying to promote particular products, Nike sometimes uses high-profile athletes simply for brand awareness.

This has been the case in the past when Cav’s Nike-branded shoes were actually DMTs given the Swoosh treatment. Although the graphics are different and there are holes in the upper above the toes, these dual-Boa shoes look like the ones that Cav was wearing back in 2018.

Everyone is obsessed with whether Cavendish can beat the record for the most individual Tour de France stage wins that he currently holds jointly with Eddy Merckx (34). We’re interested in that too, but we also want to know whether we’ll ever be able to get hold of a pair of those shoes.

Get a new Giant bike delivered to your door

Giant and Liv UK have launched a free direct-to-consumer delivery service. You can now buy bikes from the brands’ websites and have them delivered to your home free of charge. 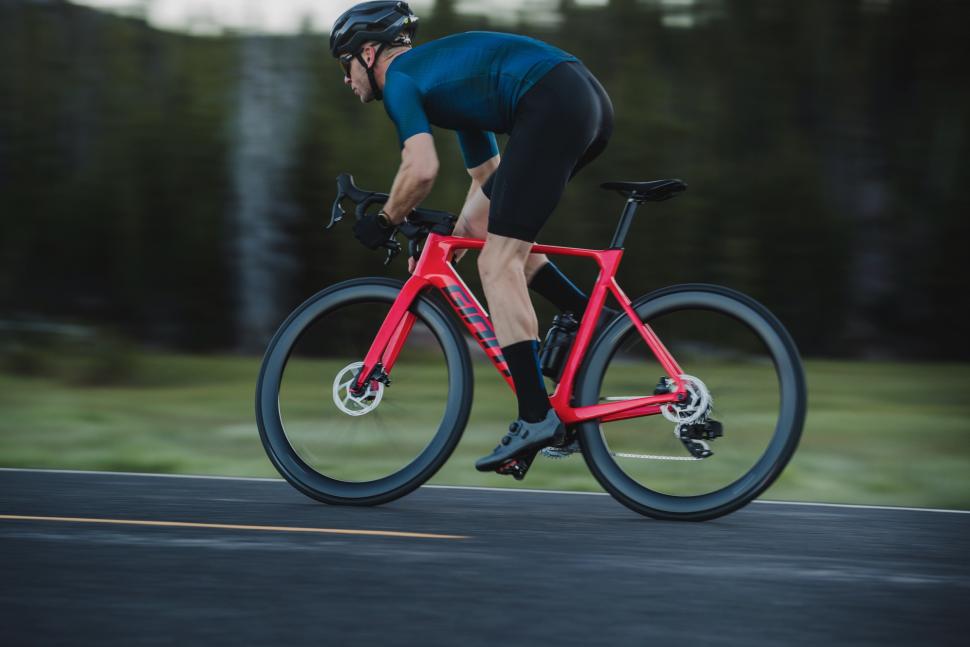 “The new free service puts customer choice first,” says Giant. “All orders will connect consumers with their local retailer for service and support, plus the Giant Rider Support team will be on hand to assist.”

This seems to be the direction in which the big brands are moving. Specialized UK introduced a similar service last year, for example.

Bikes will be delivered in a dual-branded Giant and Liv bike box “with instructions to take you through a simple step-by-step guide to help unbox the bike, set up the bars, fit pedals, and set saddle height, followed by some pre-ride safety tips”.

“Convenience is at the heart of the new service, giving consumers the choice and flexibility to suit their shopping needs,” says Giant. “Delivery will sit alongside the existing Click & Collect service to meet the demands of today’s consumers.”

If you’d rather use Click & Collect, that system allows you to have a bike delivered to your nearest bike shop.

Trek has launched an updated Dual Sport range with a fully redesigned frame that allows for larger tyres to help on rough roads, along with cables that are now routed through the head tube and frame. We must say, they look really cool for bombing around on and off-road. 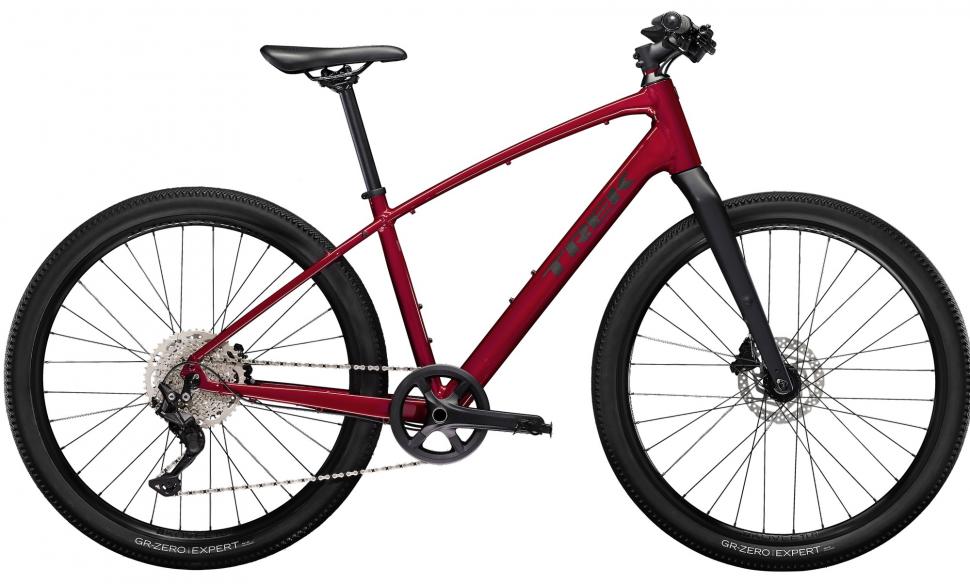 “Eliminating the suspension fork used on the previous generation, Trek employs a carbon fork that pairs with the new, lighter frame to drop the weight down a whopping 4.2lb (on Dual Sport 3 model, £975),” says Trek.

“This light weight elevates manoeuvrability, so it’s easier than ever to handle on rough rail trails and dirt paths, while the carbon fork works to absorb chatter from the ride, reducing fatigue and elevating comfort.”

You also get mounting points for frame bags, racks, fenders, panniers, and so on.

Instead of the 700C wheels and 40mm tyres of previous generations, the new Dual Sport comes with 27.5in wheels and 2in/50mm tyres intended “to soak up potholes and rough roads while elevating confidence-inspiring traction”. 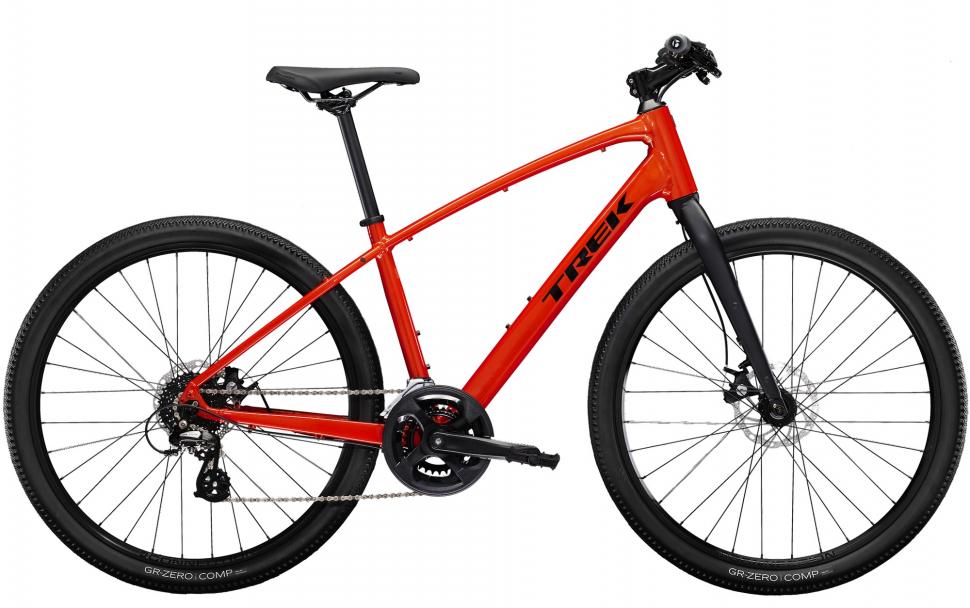 The range opens with the £690 Dual Sport 1 and contains models equipped with mudguards, racks and kickstands.

Talking of Trek – as we were – the US brand has introduced new paint schemes to its posh Project One custom bike programme. 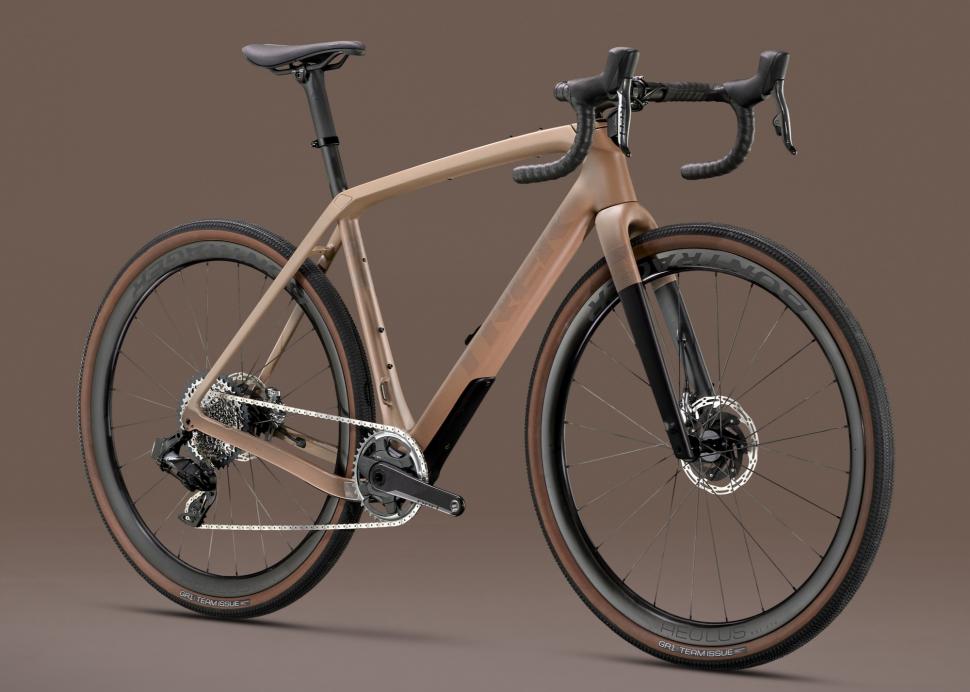 The Designer Series Driftless paint scheme (above) is said to be inspired by Trek’s home state of Wisconsin’s Driftless region. It is only available on Trek’s Checkpoint gravel bike. 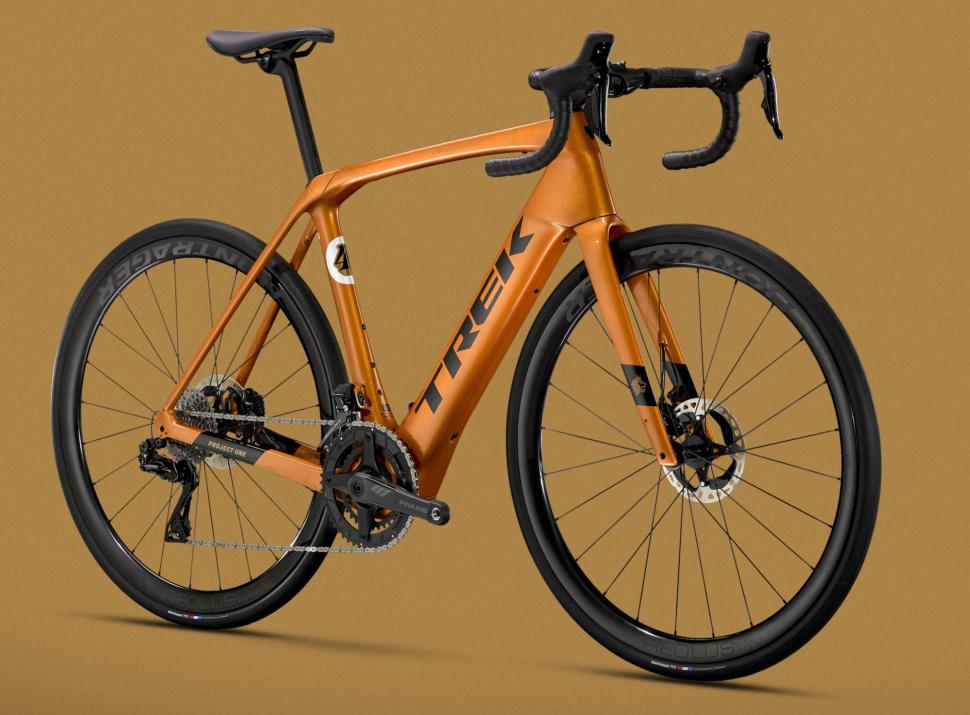 Trek’s Designer Series Formula Fast apparently takes inspiration from Formula One and rally car racing “with bold colours and details that teeter back and forth between modern and nostalgic”, according to Trek. This one is available only on the Domane and Domane+ bikes. 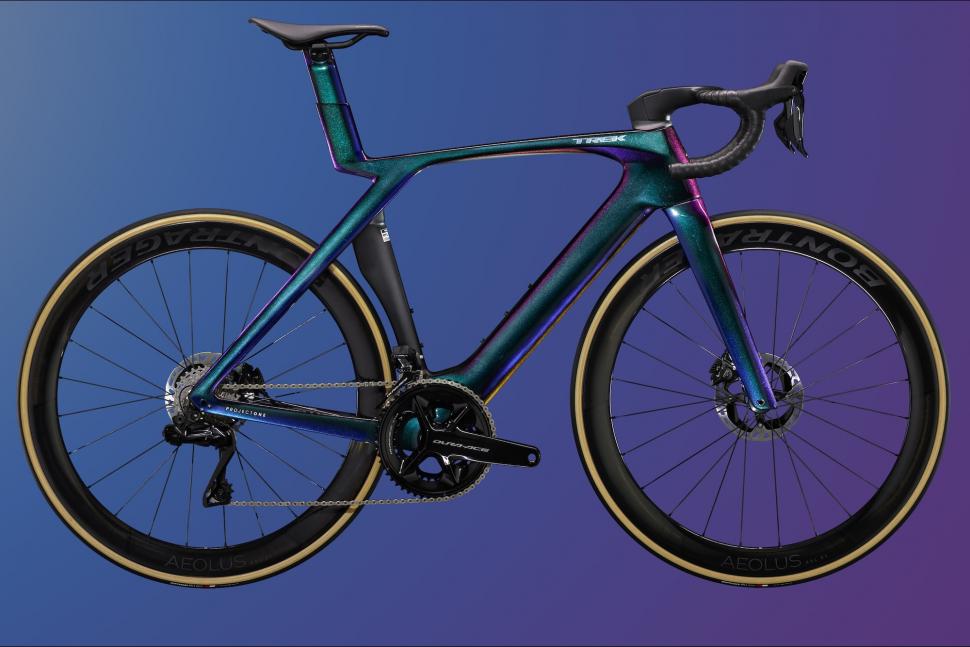 Meanwhile, you can now get this Trek's Collector’s Edition paint scheme on the Madone road bike. It’s available in nine metallic colour combinations.

Hurry if you want to ride the virtual Giro d’Italia

The third round of the virtual Giro d’Italia is currently being hosted by online platform BKOOL.

> Find out how to get started with BKOOL

“The Giro d’Italia Virtual ENEL is a virtual cycling experience created by BKOOL and RCS Sport, which allows its participants to compete on the same routes of the stages from the last edition of the Corsa Rosa,” says Bkool. 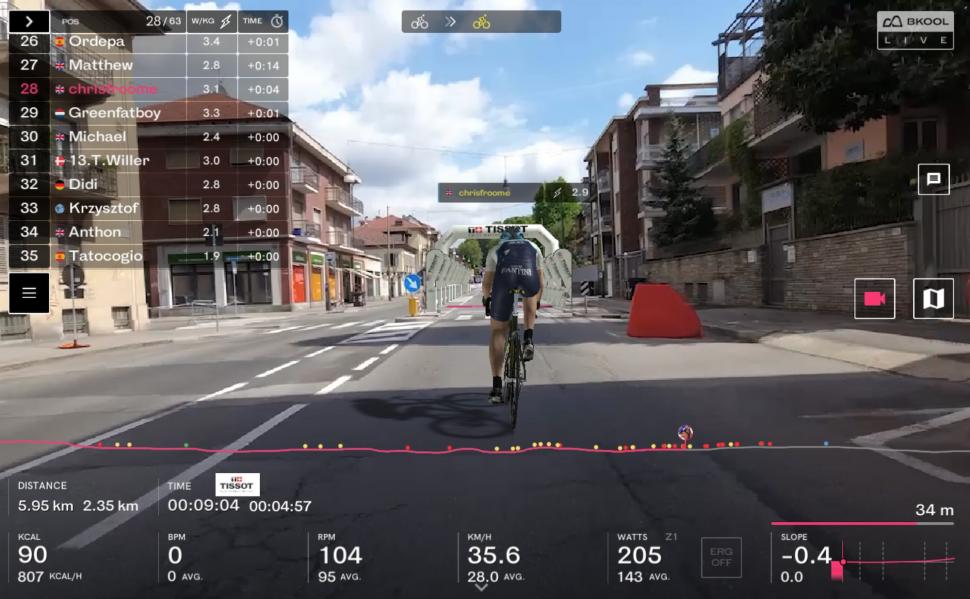 In order to ride the stages of the Giro d’Italia Virtual you need a smart trainer or a smart bike, and a BKOOL subscription, and you can get a 30-day free trial at girovirtual.com. There are five stages, the first of which runs until 22nd January 2023, so you need to hurry for that one.

“All of the routes correspond to sections of the actual stages from the last edition of the Giro d’Italia, which BKOOL users can experience first-hand thanks to a new very realistic simulation technology, with HD video images and 3D elements, fused together for a truly immersive experience,” says BKOOL.

“As well as riding with thousands of cyclists on the actual stages of the Giro, the event participants take part in special prize draws for prizes including cycling nutrition packs or event VIP tickets for actual RCS Sport races, such as the Milano Sanremo or the Giro d’Italia 2023.”

...and now you know as much as we do. Check out this Instagram page and you'll see a bunch of high-end Van Rysel road bikes too.

It looks like Van Rysel has done a lot of work with its more premium offerings recently. What's going on? We don't know. Maybe the brand has plans to support a high-level team – but that's pure speculation. It certainly seems to be moving in a more performance-focused direction.

There’s BIG new eyewear on the way from Poc

Poc will soon be launching some huge new shades, judging by what’s currently being worn by members of EF Education-EasyPost in the Santos Tour Down Under. 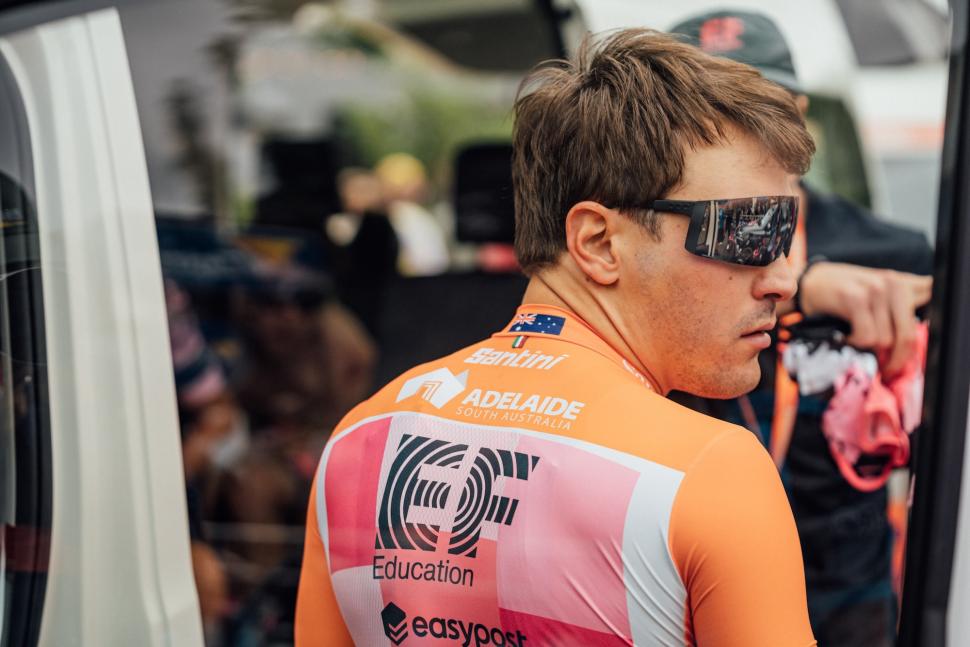 > Check out 10 of the best cycling sunglasses

Poc already offers a large range of big, big glasses, and these ones certainly follow that trend. They feature a single lens that curves close to the face. We’ve no details yet – not even a name – but will keep you updated when we hear more.

The hard-nosed investors on Dragons’ Den are a notoriously critical bunch but inventor Rupert Cattell can’t have been expecting the excruciating reception he received for the RoadRower this week.

> Check out the RoadRower on BBC’s Dragons’ Den

The RoadRower is a bike that you row rather than pedal mainly aimed at rowers who want to add variety to their training. It’s a pretty clever design but none of the Dragons was tempted to invest. Not even close. 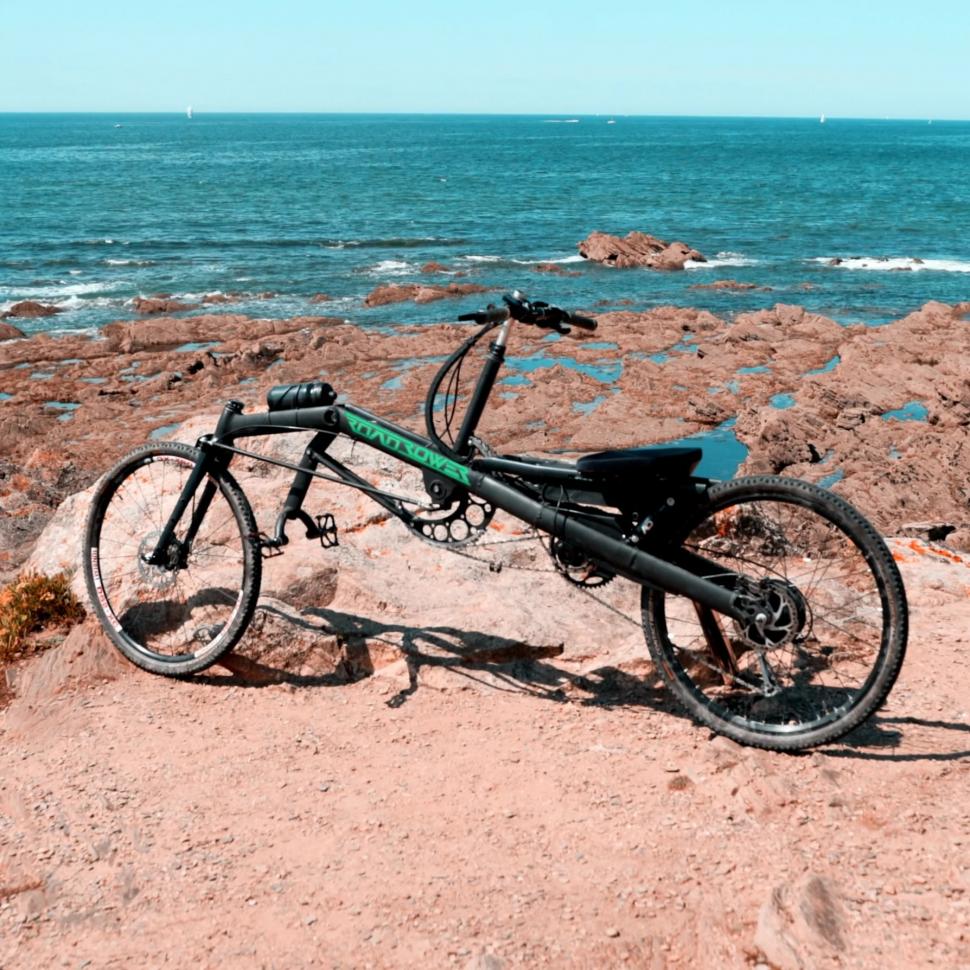 “There are some things that aren't meant to be, and that’s one of them,” said entrepreneur Peter Jones. Ouch! That's straight to the point, then.

We covered another bike you can row on road.cc a few months ago, but it’s not related to the RoadRower that featured on Dragons’ Den. The Goebike was looking for investment on Kickstarter but it failed to meet its funding target.

If you disagree with the Dragons, delivery for the RowerRoad is expected in March 2023, but you’re looking at a price of £5,000 plus VAT. 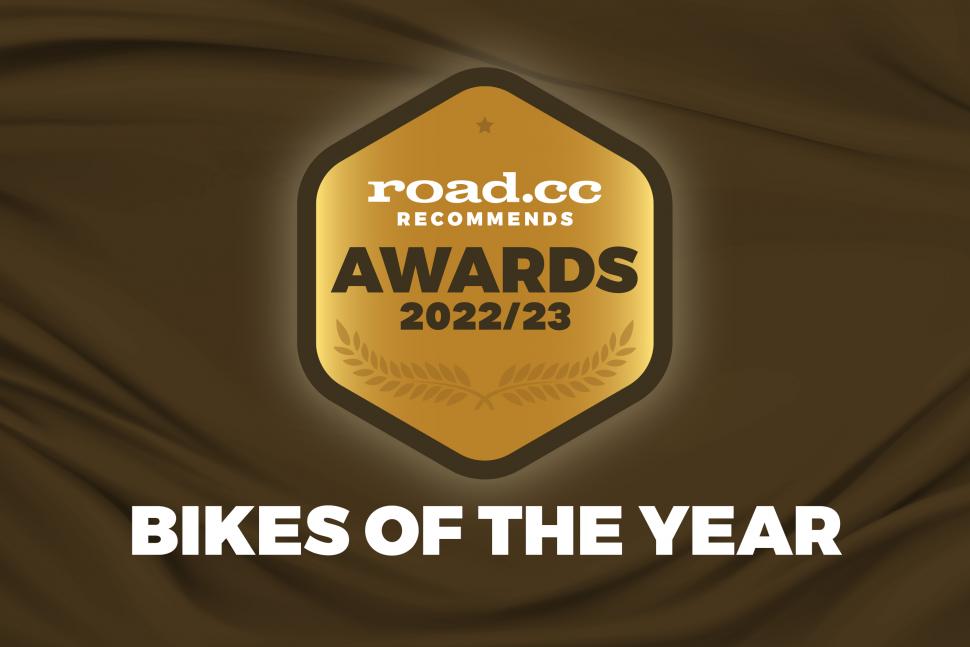 The big news here at road.cc is that we've just revealed the road.cc Recommends Bike of the Year 2022/23.

We won't ruin the surprise but head over there to find out which bike won, along with the others in our top 10.

You can also check out the individual road.cc Recommends Bike of the Year categories: electric bikes, commuter bikes, gravel bikes, and road bikes.

In case you missed it earlier in the week...