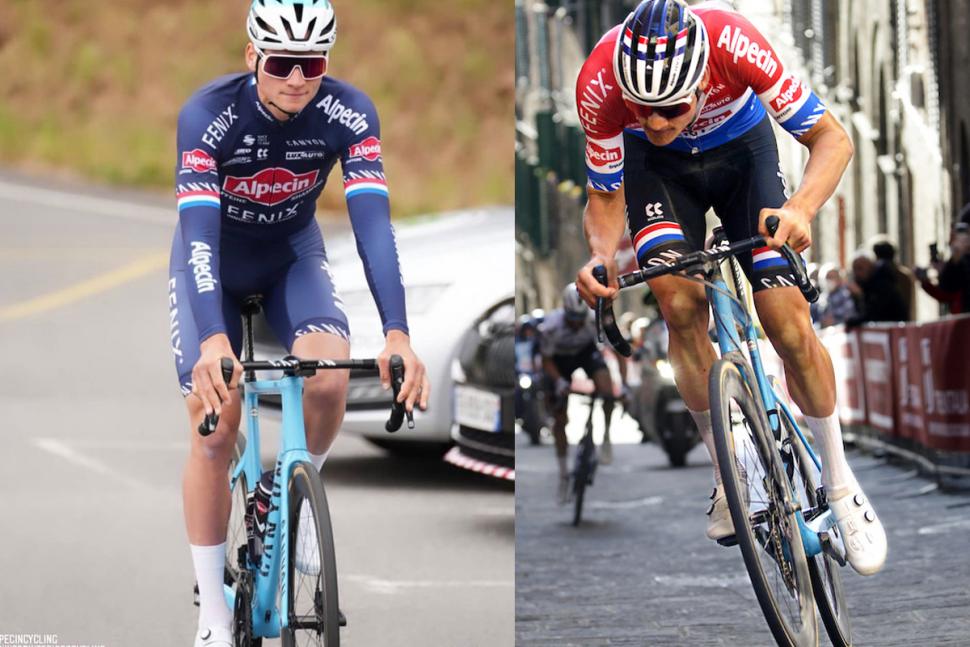 Well, it looks like Mathieu van der Poel’s bike has been sorted anyway. Does that mean it's good news for new Aeroad owners?
by Liam Cahill

Canyon owners will be pleased to know that a solution to the issues surrounding the CP0018 Aerocockpit looks to be just around the corner, as Dutch superstar Mathieu van der Poel has been spotted riding his Canyon Aeroad CFR with the correct handlebar.

The picture, shared on the Alpecin-Fenix team’s Instagram page, appears to show Van der Poel riding an Aeroad where the cables are routed tidily down the head tube, as they were when the Aeroad was released back in October 2020.

Canyon’s sponsored riders, of which Van der Poel is the most notable, were forced to use modified versions of the 2021 Aeroad CFR that the mechanics had drilled holes in, allowing for the cables to enter the frame.

This meant that the riders also had to revert back to the older Aerocockpit design which routed the cables externally.

The sight of Van der Poel using the CP0018 Aerocockpit will not only allow his fans to rest easy, knowing that he’s saving as many watts as possible; it will also be music to the ears of 2021 Aeroad CFR and CF SLX owners, who have been unable to ride their bikes since Canyon issued a stop ride order.

> Mathieu van der Poel's broken Canyon Aeroad bar could have been caused by collision with car, claims his father

The email telling owners to cease riding their bikes was sent out by Canyon after Van der Poel broke a set of the bars in the Le Samyn semi-classic. Rumours regarding the cause of the failure ranged from a particularly nasty impact on the final cobbled section of Le Samyn through to Van der Poel’s dad blaming it on a crash in Kuurne-Brussels-Kuurne a few days prior.

In the email sent to Aeroad owners, Canyon says a “reinforced” replacement handlebar is set to be available in July so we hope that Canyon is on track to meet this target.

Whatever the cause of the failure, Canyon users have been left with bikes that they are unable to ride, and there is still the question as to whether the issues with the carbon seatpost that were unearthed in February have been fixed. At the time, Canyon told road.cc that a solution was being worked on and that this was due “sooner rather than later”, but it has since suggested that a solution isn’t expected until autumn.