Faster, more capable and comes with bigger clearance thanks to double dropped chainstays
by Liam Cahill

The new gravel racer features dropped chainstays on both sides to give increased tyre clearance of up to 700×40 mm or 650×54 mm. This, 3T says, improves the capability of the bike while a tyre-first approach to frame design gives a claimed reduction in drag.

3T’s Exploro first launched in 2016 as the first aero gravel bike. It was revolutionary at a time when gravel riding as a discipline was still in the growth phase and it still, arguably, blurs the lines between road and off-road bike.

Designer Gerard Vroomen says that the new Exploro RaceMax can accommodate both racers and ‘max’ riders, hence the name ‘RaceMax’. The latter is those of us that have no intentions of winning a gravel race, but just want to get home before dark, or simply maximise their riding options.

The way that 3T has gone about meeting the demands of these two rider tyres is pretty simple. They say that the frame has been aerodynamically optimised for use with tyres that a gravel racer would normally use, around the 35-42mm mark. Max riders can bump the tyre size up to 61mm WAM, though the stated tyre clearance is 54mm. 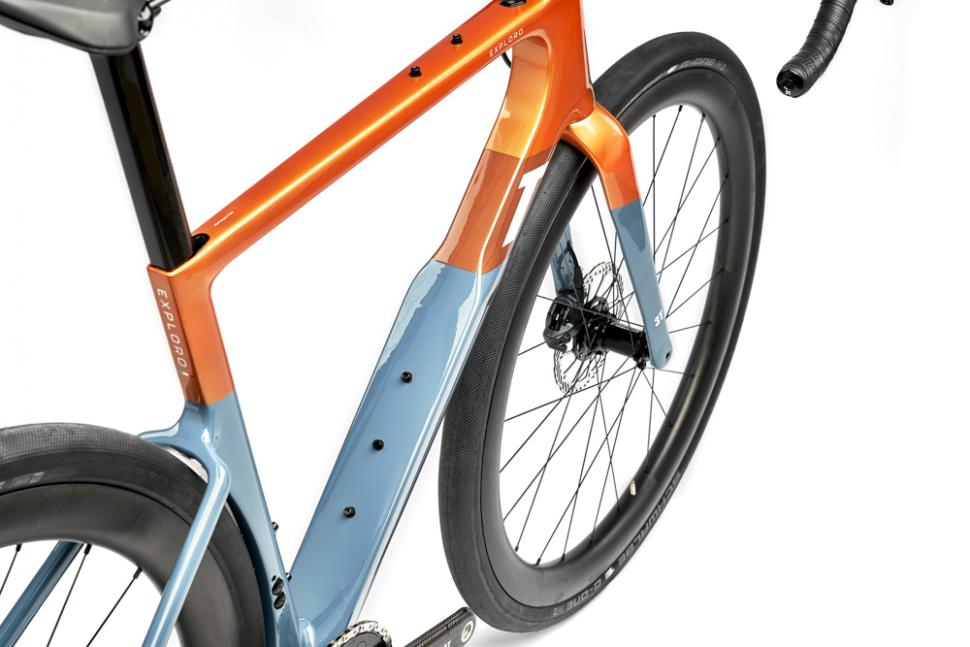 While 3T says that it has optimised aerodynamics, we’ve not seen any figures to support their claims. What we can see is a huge downtube that starts out at 46mm as it leaves the headtube and expands to a whopping 75mm a third of the way down. This, 3T claims, matches the width of the water bottle and helps to divert the airflow around the bottle. Up front, the front tyre sits even closer to the fork and down tube than before.

The flat-mount callipers are positioned for use with 160mm rotors, presumably because most riders are now switching over to use the slightly larger rotors for more stopping power. It’s a move that we saw from Vroomen’s other recent design, the Open MIN.D.

There are also some small changes like the move to a fixed derailleur hanger as found on the 3T Strada. This replaces the system on the older Exploro that some users were not a fan of. The Hang Loose could fall out when the rear wheel was removed, though Mat Brett had no such issues when he reviewed the Exploro Ltd frameset.

It’s also good to see that the new 3T Exploro RaceMax gives you the option of running a 2x setup should that suit your riding better.

So what is RAM and WAM? Initially, I was hoping it was a tribute to a certain band, but, slightly disappointingly, RAM and WAM is 3T’s way of measuring tyre size. RAM stands for ‘Radius As Measured’ with WAM meaning ‘Width As Measured’.

3T says that tyre width is not constant and is affected primarily by three main factors. The first is the inner rim width. Second is tyre pressure and finally is the accuracy of the stated size provided by the tyre manufacturer. These factors, 3T claim, can impact on both the width and the radius of the tyre. 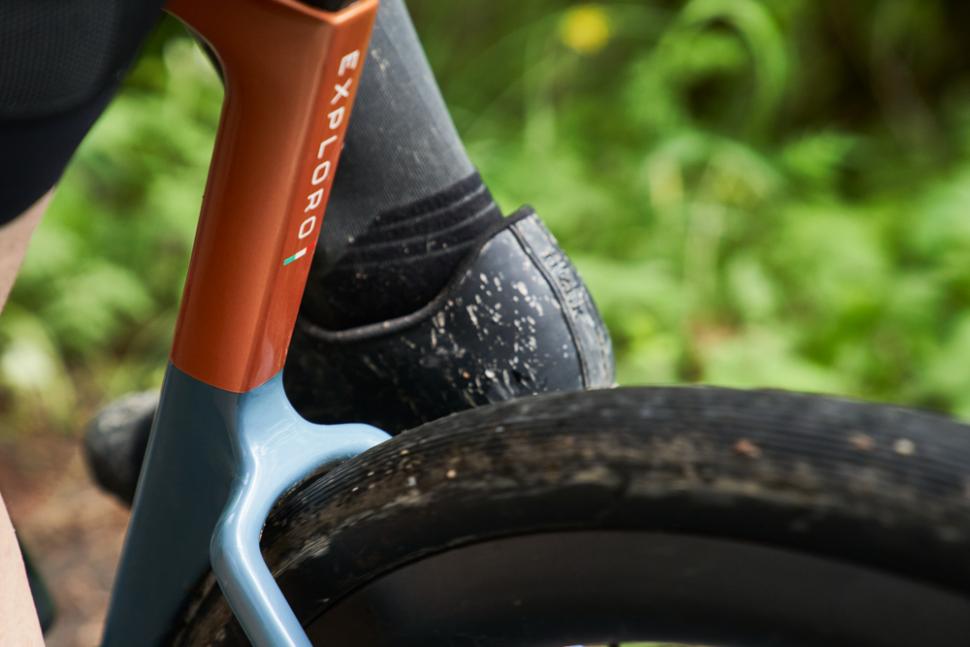 After testing three sizes of the popular Schwalbe G-One gravel tyre on four different rim widths, 3T showed that the RAM differed when each tyre size was mounted on different rim widths. This, 3T says, matters quite a bit when you’re trying to get a close fit between the tyre and the frame for those all-important aero gains.

Similarly, 3T has a graph for WAM, showing that as the internal rim width increases, so does the measured width of the tyre.

Why does this matter? Well, 3T says that when they tested a range of tyres, they found that the majority sat in a narrow band of radius measurements. This allowed 3T to design the new Exploro RaceMax frameset around that group of tyres, getting the frame closer to the tyres for improved aerodynamics.

Small changes to the geometry 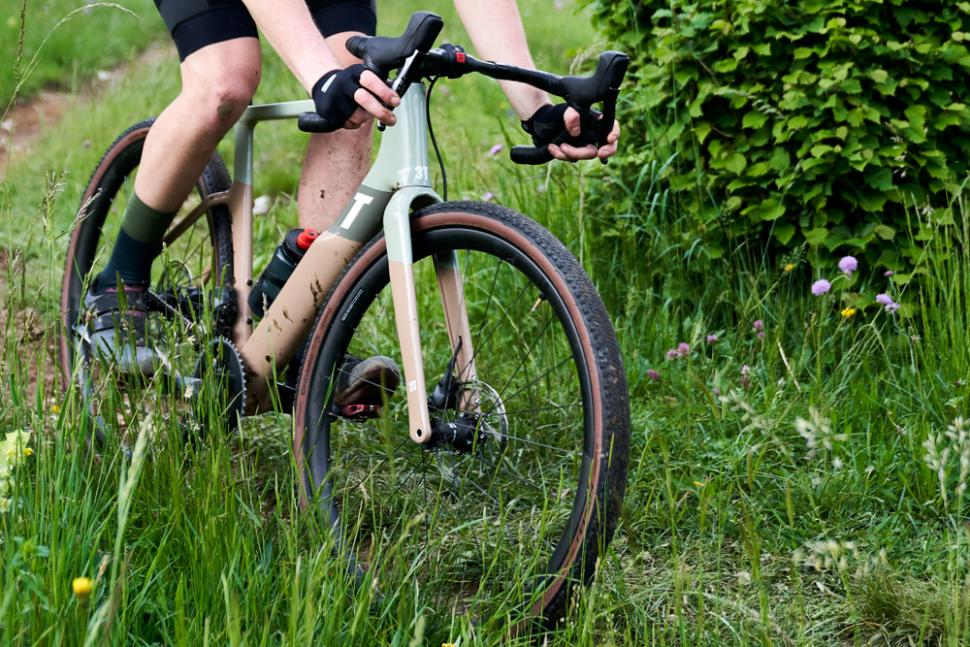 The geometry of the Exploro has been tweaked with this new RaceMax and there are also two more frame sizes, taking the rider height that will fit the Exploro RaceMax down to just 4’8”. The other sizes now have more overlap in terms of rider height.

Generally, the length of the Exploro has remained unchanged, though the RaceMax sits slightly higher with a small increase in the stack. This, 3T hope, should give a less aggressive position for more comfort on long gravel rides. 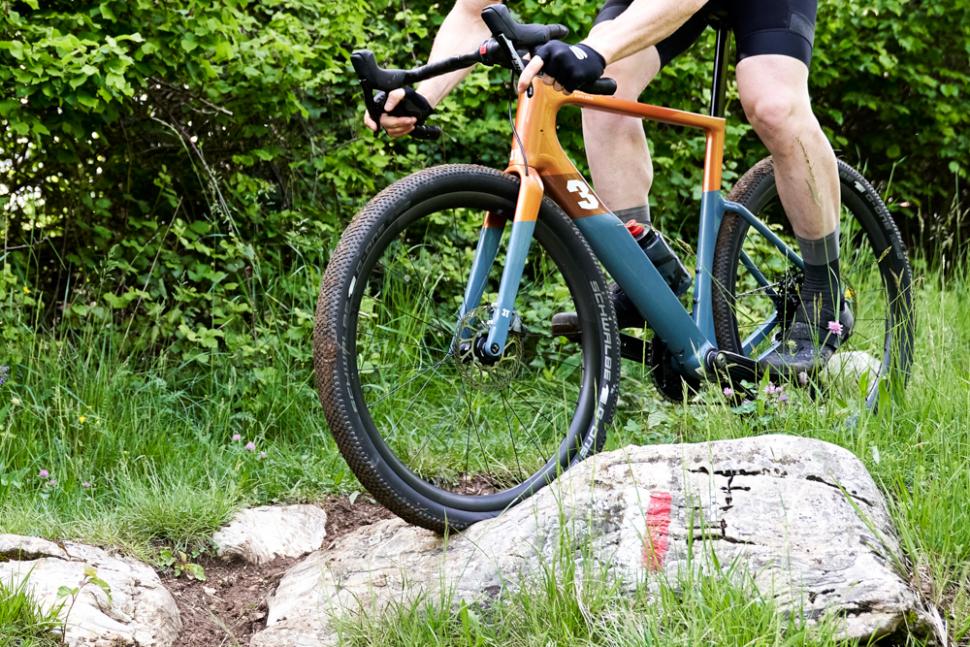 The chainstay length also says the same at a very short 415mm rear centre. This is paired with added bottom bracket drop which should give a more planted feel. We’ll be very interested to see what, if any, difference these changes make compared with the older Exploro.