We've got some early samples featuring Pearl Izumi's new PI Dry waterproof fabric, and quickly tested the waters before sending them off for review...
by Jack Sexty

Pearl Izumi are claiming that their new PI Dry technology is a game changer in waterproofing. The PI dry fabric has permanent water resistant technology that actually coats each fibre on the outside layer, so the garment remains water repellent underneath without saturating.

The treatment coats individual fibres, instead of just the surface of the garment, and Pearl Izumi say this means the fabric will retain its water resistance for much longer. In fact, they say that after 100 washes 90% of the performance should be maintained, whereas the industry standard is 80% of performance after just 20 washes. The breathability is also improved by combining the fibres into yarns, and water repellency is maintained under stretch so you can achieve a better fit compared to traditional hardshell fabrics. When it is wet, you simply shake it dry. 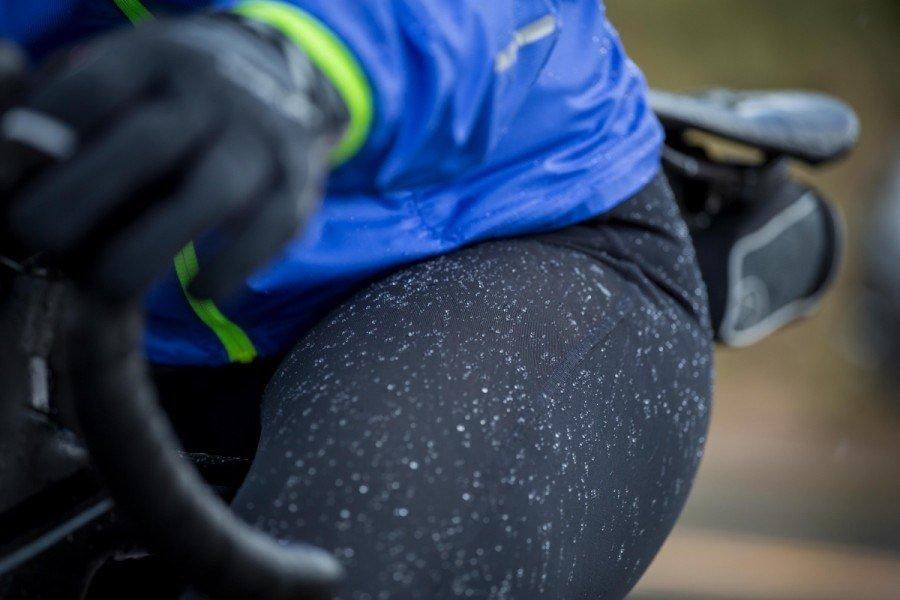 They have a three-year exclusive deal to use a new hydrophobic fabric technology, and it will initially be used in a range of bib tights, leggings, leg, arm and knee warmers, but we expect Pearl Izumi to roll it out onto more garments eventually. We don’t have UK prices yet, but in the US the tights will cost $140-195, with knee warmers $45 and arm warmers $35.

There are other water repellent technologies out there that we’ve tested, and have tested well, such as Castelli’s Nano Flex and Lusso’s Max Repel No Rain, and our initial impressions is that PI Dry looks like it fits the bill. We’ll be putting some miles into the new gear as the temperatures get cooler next month, so look out for our reviews soon...