7
10
Well-priced light with decent all-round performance bar a few niggles, and you can choose your own lumen outputs
VLS system gives adjustable lumen outputs to suit the situation
Various mounts and accessories included
Decent value
Band-on mount not ideal on rough roads
Possibility of scrolling through flash modes to get back to constant
No illumination of the button
Weight:
169g
Contact:
www.raleigh.co.uk
How we test

The Moon Vortex Pro 1300 has seen a boost in lumens for 2020, and while that impacts burn-times a bit, the adjustability of the VLS system means that you have total control over the balance brightness levels and battery life. With plenty of accessories in the box, the Moon is quite the performance bargain too.

This year Moon has increased the output over last year's model by 200 lumens, up to 1,300, which gives it some serious punch for use on the darkest of lanes. The beam is quite torch-like (as you can see in our beam comparison, above), with a focused 17° spot surrounded by a flood of 84°, which is wide enough to pick up the verges when in the lanes.

The cool white colour of the LED gives good contrast, easily allowing you to pick up potholes and road defects in the distance while travelling at speed.

My only real criticism is that for a light I'm using to see by, I'd like to have a mount that is fixed in position on the handlebar rather than the rubber band solution used for the Vortex. The band does enable you to fit it quickly to a range of handlebar diameters (22-35mm), but on rough roads it can vibrate about a bit. Also, it's a pain if you accidentally nudge the light, especially after you've got the angle just right. 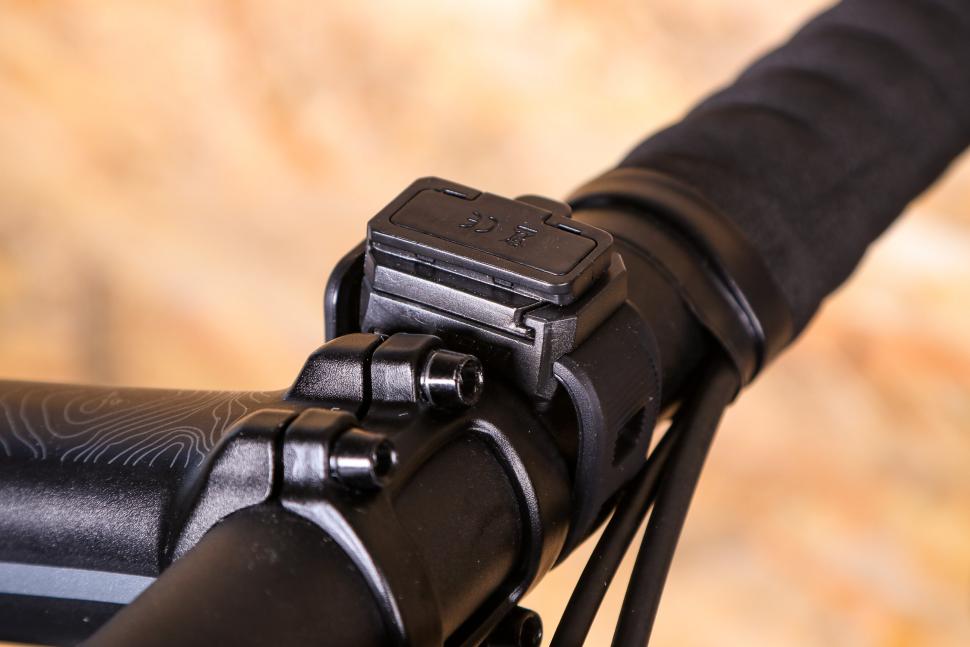 In the box, you also get a helmet bracket which works well, especially off-road. About 40 per cent of my miles at the moment are on gravel and I found the Vortex Pro useful as a second light, especially through the twisty bits or when travelling through tree-lined routes with low branches.

You also get a wired remote control which connects to the light via the USB-C charging port. I've found that being able to change modes while keeping your hands on the hoods makes life a lot easier. I use the Ravemen PR1600 on my winter road bike, and being able to switch between dipped/high beam easily when interacting with oncoming traffic is great.

Moon has judged the length of the cable well – it reaches from the hoods to the light while following the contours of the bar, so it'll sit nicely under the bar tape.

Right then, that's how to flick through the modes, but what options are there?

There are three steady modes and four flash. 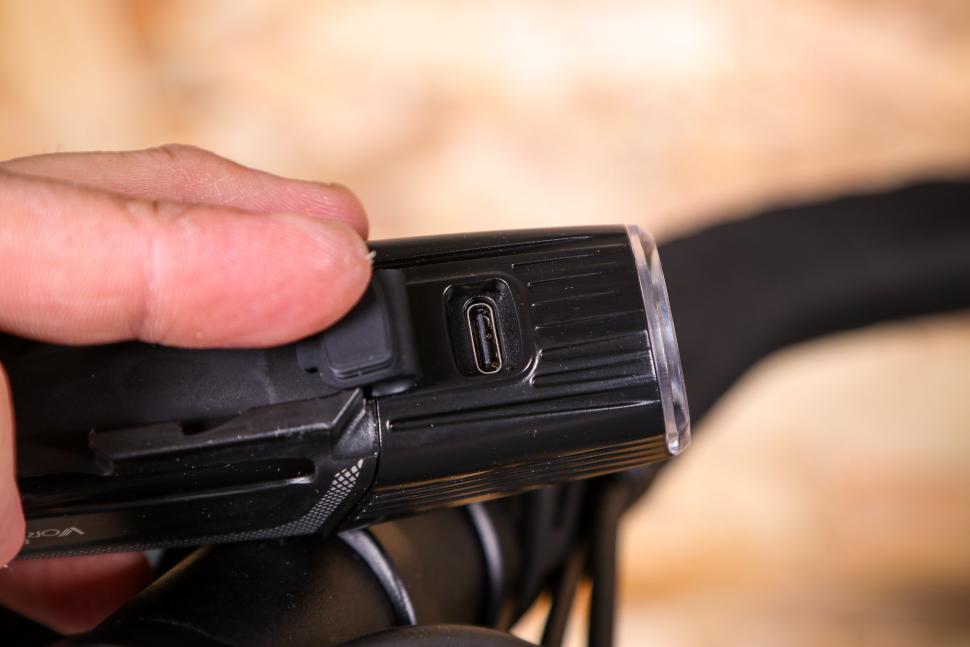 The flashing modes are a basic 'flash' of 100 lumens, a steady flash which keeps the LED on low all of the time with a 200-lumen pulse over the top, a 400-lumen day flash, and for emergencies the Moon will flash an SOS message. Moon claims burn-times for the four flash modes of between 54hrs and 132hrs.

On top of these standard settings, though, the Vortex Pro comes with a Variable Lumen System (VLS) which lets you set your own lumen output (between 20 and 750 lumens) for each of the modes bar Boost and SOS.

Press and hold the power button in whichever mode you want to tweak, and you'll see the LED start to get brighter or dimmer, and once you are happy, let go of the button. The mode will stay at this VLS setting until you remove the battery to reset it.

One of my pet hates is having to scroll through flashing modes to get back to the brightest setting, and while the Vortex Pro isn't immune to this, you can get around it.

To get to Boost mode from any other mode you just need to double-click the button or remote; double-click again and you are returned to the previous mode, so you can go from one of the constant modes to Boost and back without having to go through a disco-flash-frenzy on an unlit road.

For main road work I find that the 1,000-lumen (Mode 1) is overkill, so using the VLS I changed the 100-lumen Mode 2 up to around 600 lumens and then flicked between that and Boost, like a car's dipped/main beam setup.

One thing that is a bit annoying is that when changing modes using the light itself, the button isn't illuminated. I could work out where it was roughly, as it's just in front of the mode/battery life display, but I couldn't see it and it is difficult to feel through gloves. 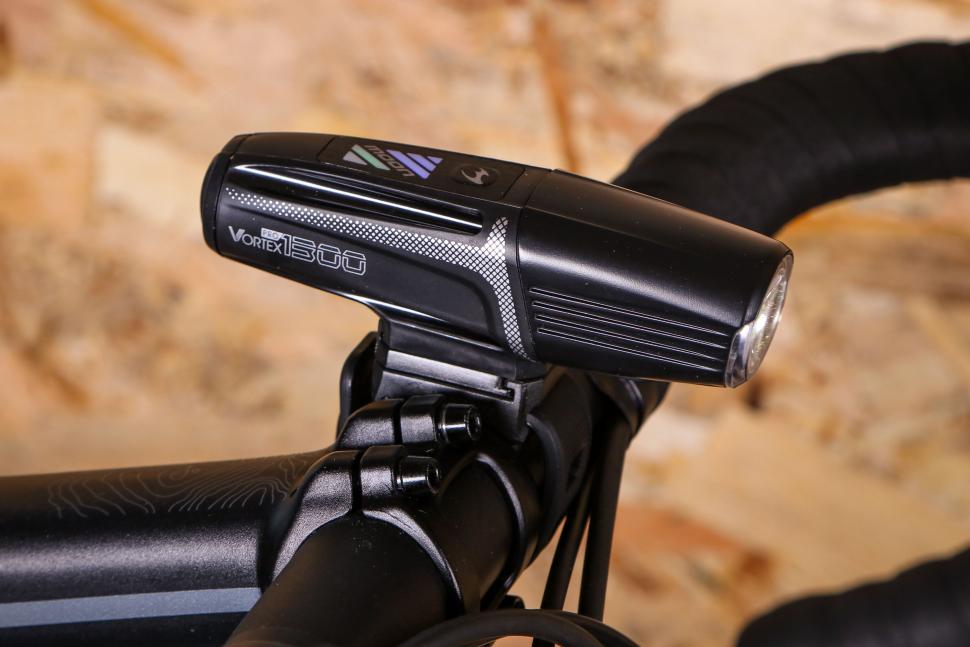 Using the VLS does bring with it a little bit of guesswork when it comes to battery life, but the indicator keeps you informed, showing you how much juice you have left. The battery is removable, so with a spare you can double your ride time with a mid-ride switch-a-roo.

If you are a commuter and need to stuff your lights in your bag, then the Vortex Pro can be locked to stop accidental turning on.

When it comes to money, I'd say that the Vortex Pro delivers a lot for its £79.99 rrp. It's a well made and robust unit, and with IPX5 (up from IPX4 on the previous model) waterproofing, it'll stand up to heavy rain (and the bathroom shower test) without issue.

It's the same price as the Ravemen CR1000 which comes with lower overall output and shorter battery life in like-for-like modes. And while you also get a remote control, there's no helmet mount.

Lezyne's Macro Drive 1300XL is a touch more expensive than the Moon at £85. You don't get as many accessories, but it is a very well-made light. One of the biggest niggles is that you have to scroll through all of the modes on Lezyne lights to get back to the one you want. You can get around this with Race Mode, which gives you 1,300 lumens on high and 150 lumens on low, but 150 lumens just isn't bright enough. If Lezyne could deliver something like the Moon's VLS system to give you, say, 500 or 600 lumens, it'd be a winner. Especially as the burn-times are very impressive.

Overall, there are a couple of little foibles that stop the Vortex Pro being perfect in my eyes, but as a package, it's a well-priced, well-made light with clever design ideas like the VLS.

The Vortex Pro is a capable front light with a maximum output of 1,300 lumen.

Decent instructions come in the box.

Burn times are pretty good considering the lumen output, and they are achievable too. Charging takes around 3.5-4hrs.

The band mount can move around the bar on rough roads.

When you look at the opposition, like the Ravemen and Lezyne I mention in the review, you'll see that you are getting a lot more for your money with the Moon. At this price most lights have little niggles, but the Moon goes some way to counter those through its design and ease of use.

Would you consider buying the light? Yes, it's a good price for such a clever light.

The Vortex Pro balances good illumination with battery life, and the VLS gives real adaptability, it's clever. A move to a more secure clamp would bring it in line with some of the opposition, and I'd like to see a way of keeping flash and constant modes separate when scrolling through, but it's still a good light overall.