One thing you certainly can't criticise Lezyne's lights for is value, and this Macro Drive 1300XXL lives up to that, costing just £85 for a 1,300-lumen output thanks to the new Tri-Focus optics, plus it has some decent battery run-times too. It's solidly made, so should last well, with the only real downside being the odd choice of modes used in the Race mode.

With its CNC'd aluminium alloy body, the 1300XXL certainly feels a quality bit of kit in your hands and it stands up to day to day use and abuse for commuters or those who train a lot during the winter. Dropping it or crashing with it mounted to your handlebar will see it just shrug off any damage, maybe a scratch to the paintwork at worst.

Heavy rain isn't an issue either. We've had some biblical days of rain lately and the rubber cover that hides the USB charging point has been totally resilient to everything the weather can throw at it – as well as the bathroom shower for good measure. 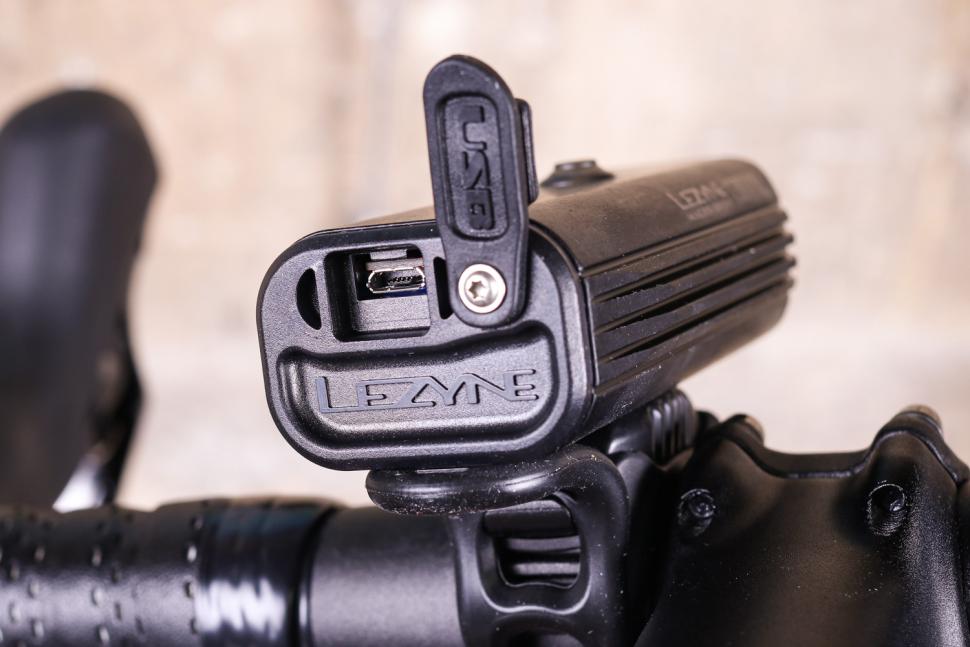 Fitting it to the bike is an easy job as it just uses a rubber band style mount which wraps around many different diameter handlebars. To make fitting easier you need to twist the light by 90 degrees to allow you to do the band up before twisting the light back into position. While the bracket is attached to the light firmly, being able to twist it from side to side isn't ideal in my eyes. It doesn't happen often, but on really rough roads the light can vibrate and start to twist slightly so its illumination isn't necessarily going straight ahead.

That isn't the only issue with the bracket either. Wrapping a rubber band around a tube is fine for rear lights or those to be seen by. If they rotate around the bar/stay a bit because of vibration it isn't really an issue, but on a high-powered light to see by, you want to set its angle and leave it there.

I've said this in many Lezyne lights reviews... I just wish the company would use a proper mount that bolts tight to clamp the handlebar. Once you've got it set up it's there to stay, even if you keep removing and refitting the light itself.

As it stands, the 1300XXL can vibrate around the bar, or when you push down on the button to change the mode you can end up angling the light further downwards and have to readjust it.

Bracket aside, the beam pattern that the Lezyne puts out is pretty decent. Where most of Lezyne's bigger lights always had two LEDs, another has now been added centrally and above. This gives a much brighter spot without affecting the wide beam spread achieved by the other two.

There is still a bit of light bleed out of the top of lens, so you need to angle it slightly below level to avoid blinding oncoming drivers and be a bit sensible about which mode you are using. Get it right, though, and you get a good depth of light travelling down the road in front of you while lighting up the verges and giving good peripheral vision which helps you take everything in at speed.

The 1300XXL has five static modes and two flashing – well, one flash and one pulse.

Both the Flash and Pulse modes put out 150 lumens and have a battery life of 42hrs and 39hrs respectively.

In use, those burn times were easily achievable and when recharging you can get from flat to fully charged in the claimed 3hrs using the mains. It'll take a little longer using a PC or laptop.

The light has a mode memory, so will turn back on in whatever mode you turned it off in. All you have to do is press the on/off button for two seconds. 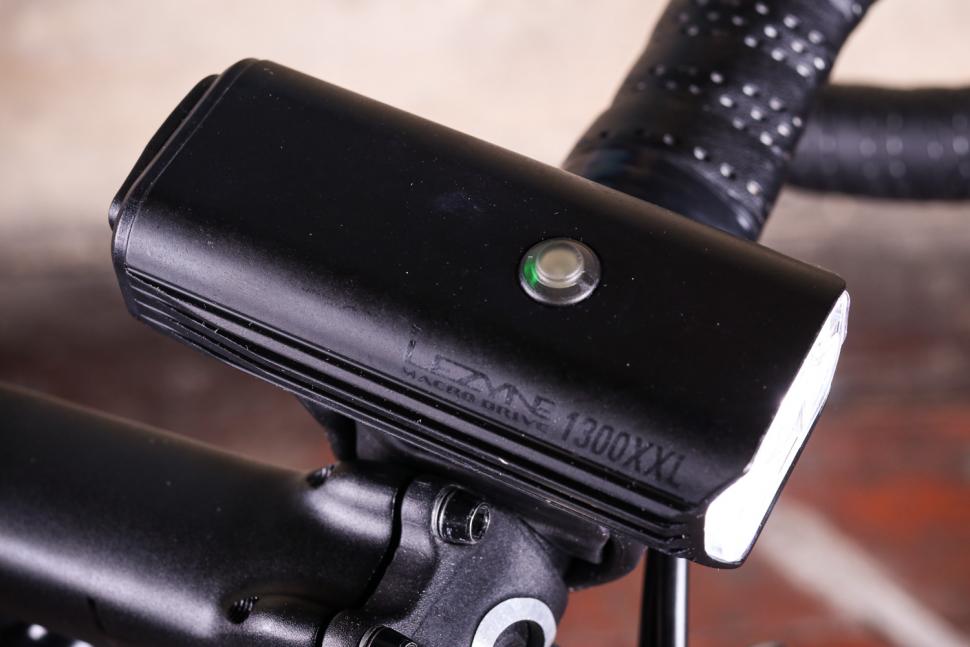 Now, it's not just Lezyne that is guilty of this, but having to scroll through the flashing modes on a dark road to get back to a brighter setting is just idiotic, but that is exactly what you have to do here. Say you are riding out in the countryside, blasting around the lanes with the brightest Boost mode on at 1,300 lumens, a mode you can use a fair bit because that 2.5hr burn time is pretty impressive. You see a car coming towards you, so you dip it down to Blast (800 lumen) or even the next one, Enduro, to be sociable. The car passes and you want some more illumination, but to achieve that you have to go through at least four other modes including flash and pulse to get there.

To give it its due, the 1300XXL does have a Race mode. Press and hold the button for five seconds with the light off and it'll switch over: you now have just two modes to choose from, Boost and Economy, and you can flick between them like a car dipping its lights. The Boost is fine, but the Economy just isn't bright enough. It puts out just 150 lumens, a big jump between the two, which takes time for your eyes to adjust to.

As Emma said of the Micro Drive Pro 800XL, which swaps between 400 and 150 lumens in Race mode, the lower setting isn't bright enough.

Here, the 450-lumen Enduro mode would make so much more sense in real world use. That sort of output is fine for riding on wide open main roads without traffic around, so you could really spread that battery life out, just using the Boost mode for technical sections.

Alternatively, various programs would be an option, like those found on Exposure's Strada SL. Yes, it is a lot more money than the Lezyne at over £200, but what about the Moon Meteor Storm Dual front light? It has the same output as the Lezyne, gives you various modes that you can toggle between for 'high' and 'dipped' without going through flash, plus the lumen output of each of those modes can be completely customised. You get a proper bracket too, and a wireless remote for an extra fiver!

It does show that while the Lezyne isn't expensive, it is up against some very good opposition for similar money.

Overall, there is a lot to like with the 1300XXL, but it falls short on details like the mode choices and bracket.

Lezyne says, "The Macro Drive 1300XXL is a new high-powered LED cycling light offering up to 1,300 lumens of output. It features our Tri-Focus optics, which creates a brighter center spot in a large wide-angle pattern. It's constructed from machined aluminum and has cooling fins that optimize performance. The light is micro-USB rechargeable and it can run for up to a massive 148 hours on a full charge. A versatile strap secures it to a variety of handlebar sizes, and it's available in Black, Matte Black and Silver. Remote Switch compatible."

If you want a high-powered light with decent battery life it's a good choice, as long as you can live with scrolling through modes while riding.

There is only one button so it is pretty easy to use once you have familiarised yourself with it.

Not as stable or secure as a proper clamp.

Very good burn times for the output, and charging is pretty quick too.

In terms of lighting performance it offers a good beam.

Not bad, but others are hot on its heels.

The beam pattern is good and the battery life allows you to do some quite long rides after dark.

Having to scroll through flashing to get back to higher settings.

For what you are getting in terms of output and build quality, it is a good price, although others like the Moon Meteor I mention in the review offer even more for the money. The likes of Cateye, Giant and others are delivering very good lights below £100 too.

Did you enjoy using the light? Yes, if I just left it in one mode.

Would you consider buying the light? It depends on what deals are around.

Would you recommend the light to a friend? I'd mention it but highlight its flaws.

There is a lot to like here. Power output, battery life and build quality are all impressive and at decent money too. I just wish Lezyne would reconfigure the modes or make them customisable like some others.