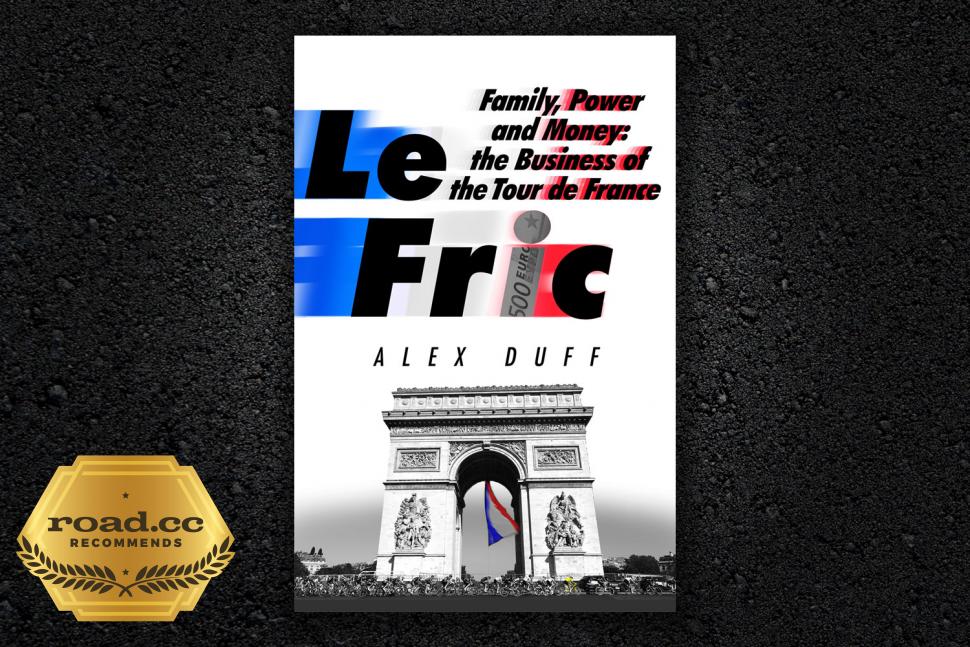 Here's a rarity: rather than yet another book about the race, Le Fric by Alex Duff looks at the Tour de France from a different perspective; focusing on the company behind the famous event, it's more about the business side than the actual racing. It's a welcome new approach.

Does any race give rise to more books than le Tour? Easy answer: no. A question that would be harder to answer is this: are there any angles that haven't yet been explored in some way? It appears so.

Look at what has appeared in recent years: obviously there are regular histories of le Tour, whether they're the official version, the unofficial version or a more data-driven tome entirely. Even the iconic yellow jersey warrants its own treatment, and of course there is the inevitable compendium.

There are a few publications specific to a particular Tour, be it an extended report of the 1976 race, a collection of paintings from the 2014 event, or an annual reviewing the centennial Tour. And you can forgive 'G' for wanting to capitalise on his 2018 victory.

Next up are publications where someone has actually made an effort to come up with something different, such as maps of Tour routes or the official route maps (which are not the same thing), or even a cartoon treatment.

Then there's the range of books that are not specific to the Tour, but simply want to piggyback on the name: to put it another way, they would be perfectly valid works without the Tour association, but probably wouldn't sell quite as well. Choose from a bit of science, a list of 100 climbs, or a better illustrated list of 20 climbs.

There are more, but you get the idea – so I will finish with the least credible of the lot, the Official Tour de France Training Guide, which isn't even particularly good.

Perhaps it shows just how hard it is to find something new to write about le Tour that is also worthwhile: Duff solves this challenge by not really writing about le Tour at all! Instead, he turns his attention to the Amaury Sport Organisation (ASO), and 'the secretive family that owns the race.'

Duff's approach is to look at le Tour's 'changing relationship with money or cash – le fric – during the era of newspapers, television, and the internet.' This includes discussion about cycling's 'feudal business model formulated a century ago.' Most other sports have changed, but 'to defend [cycling's] prize asset, the family leans on the state and a Gallic distrust of foreign intervention.'

That's all true, but it doesn't make it sound terribly exciting. Perhaps a better way is to view this as 'the first book to unravel how ... one Parisian family gained and maintained control over the world's most famous bicycle race.' I reckon that sells it a bit better, but still doesn't really do full justice to what the book delivers.

The Amaury family's business interests first became entwined with the Tour de France in 1944, when Émilien Amaury agreed to help Jacques Goddet by using his 'influence in the provisional Government' in exchange for 'a 50 per cent stake in L'Auto's treasured asset – the Tour de France.'

The history of the race is well-documented, but its effect on what became the ASO is less well-known: 'for most of the last century ... the Tour de France was a money-losing marketing vehicle to promote a portfolio of newspapers the family owned.' That's because le Tour has not always been the 'economic behemoth' that it is now, but rather 'a national festival with a cast of riders from Western Europe.' Today, the family's 'media business is more beleaguered then ever,' and it's the sporting events that bring in the profits.

Things started to change in the 1980s. The key ingredients that eventually led to today's commercialisation and globalisation were TV rights, the American market, and Jonathan Boyer. Along the way, the ASO were also bringing other events into the fold; although now covering several other sports, cycling dominates.

There are numerous well-documented moments in the history of le Tour where you know that top-level discussions would have been taking place behind the scenes – because of threats to le Tour's reputation, finances, even existence. Now we can get a bit more insight into what really did go on.

Take the time in 2008 when the ASO decided to take 'all of the family's races out of the ruling body's jurisdiction'. In other words, show the UCI who's boss. Or in 2011, when the main cycling teams were approached to set up World Series Cycling – a concept that has been touted (and sometimes even achieved) in other sports. Essentially, if any proposed change requires the ASO to relinquish some power in order to succeed, it won't happen on Marie-Odile Amaury's watch.

>  The best cycling podcasts – mountain, road and gravel bike chat you need to listen to

In such cases, it was surprising to see the lengths to which the family would go to protect their interests – and revealing to see how the current structure of the sport lets them get away with it.

Another example is the Armstrong years, viewed here from the perspective of what effect it had on various companies, including le Tour: I wouldn't want to read any more about Armstrong's doping history, but I did enjoy hearing about the business implications of his rise and fall. Again, a new angle on a well-documented story.

There is a lot here that I wasn't aware of, which is of course the whole premise of the book. What we don't know is if there is more that hasn't been said (at least not yet): you would probably need the Amaury family's full involvement if there were more to be revealed, and 'the family prefers not to be in the public eye'. However, 'Jean-Etienne Amaury was polite and helpful,' apparently, so it sounds like there was some level of assistance.

On balance, I feel this detachment could be an advantage: Duff has unearthed a huge amount of information by other means, and that lack of official endorsement has probably allowed him to delve into areas that the family might not have welcomed. On the other hand, it does limit the amount of financial detail on offer: one disadvantage of investigating a private company is that they don't have to make much public.

Le Fric brings new insight to the Tour de France, in much the same way as The Medal Factory did for British Cycling – despite the amount that has already been written about both of those institutions.

From the Publisher: "The fascinating and unknown story of the Tour de France's ever-changing relationship with money and power – and the enigmatic family behind it all. It started with a cash drop by an English spy in occupied Paris in 1944. Reserved for Resistance groups during the war, the money reached Émilien Amaury, an advertising executive, who was tasked to help France return to a free press once liberated. He soon launched a newspaper empire that – unbeknown to him – would own the rights to run what would become one of the greatest sporting events in history."

"Le Tour, once a struggling commercial phenomenon, began to rise in popularity across much of western Europe in the glum years after the Second World War, lifting the mood of the hungry and despondent French. But with the increased interest in the event, exacerbated by the creation of television and the internet, came several cultural threats to national heritage. Multiple attempts to wrest power and profits from the latest generation of the Amaury family – who still own the race and take tens of millions of euros home in dividends – have followed, but not without a fight.

"Fast-paced and fastidiously researched, Le Fric illustrates how moments off the bike at the Tour de France are every bit as gripping as the battle for the yellow jersey."

It's a lot of new information about an event that has already been covered extensively elsewhere.

Not quite as much financial information as you might expect from a business-based book.

There aren't many books that cover the business side of our sport, let alone ones of this calibre. It's a welcome addition to the Tour de France-related bookshelf.