5
10
Okay but not great photo collection from the hundredth Tour de France
Weight:
2,296g
Contact:
www.bloomsbury.com
How we test

I was looking forward to reading Rouleur magazine's Centenary Tour de France annual. If anyone was going to do the 100th edition of the world's most famous cycle race justice you would put money on Rouleur right?

Such an annual represents just how far cycling has grown as a sport and a business in just the past ten years. The very idea has a cyclic 'Grande Boucle' feel to it all by itself: it's an annual, published by a magazine created by a clothing brand to mythologise itself, covering a race created to push sales of a newspaper. As such Rouleur's Centenary Tour de France annual is perhaps the most eagerly awaited publication of the year, even if someone at Rouleur doesn't know the difference between a hundredth edition and a 100-year anniversary. Well does it deliver? Er, not quite.

Rouleur's editor Ian Cleverly starts the book with an email sent out four months prior to the race start to a select band of seven photographers announcing that between them they will be tackling the race of all races and bringing back amazing images to complement written pieces on each stage of the Tour. So far so good. However, cycling is one of the most quixotic and frustrating sports to photograph and the Tour de France the most self important and difficult event of the year for those trying to cover it. In football, by contrast, photographers toddle along to an enclosed ground where all the action will be taking place, set up a wide angle camera behind a goal and then snap away with a long lens as captive performers dance around in front of them.

When you're covering a race on a closed road that covers at least 100 miles a day with no access to a motorbike chauffeur, location and timing are key. Access to the riders before and after is essential. The laziest cycling photography is at the end of the race where you can 'press and pray' and spunk 12 frames a second on a long lens shot and send the best shot of Cavendish gurning over the line off over the wire before he has mounted the steps of the bus. 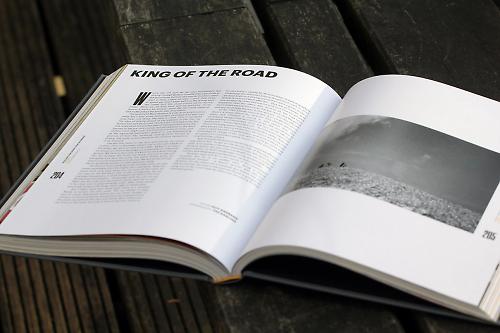 The hardest cycling photography is a meld between riders, spectators, scenery and action that passes you at 30mph and dares you to freeze these different elements in pleasing groups of two or three. It's all about access and planning. You would expect a magazine of Rolueur's calibre to have the triple A passes and the experience to pull all this off. Judging from the quality of the photography, they didn't.

There are a few good days. Geoff Waugh and Taz Darling deliver, although Photoshop plugin film filters should perhaps be used more sparingly. Grain is sometimes not gritty and retro but invasive. Robert Wyatt provides a solid set of images too.

But flicking through, the general impression is of opportunitiies missed. Out of 148 pictures only perhaps five are great images that will stand the test of time. Many others bear no relation to the stage they are about and often have lacklustre written pieces to match. The section on Ventoux is just shocking in its insouciance. A shot of a few fat blokes with microphones, Christian Prudhomme's backside hanging out of a fast moving car and a bit of craggy mountainside with two TV cameras on it does not convey the nature and events of that particular stage and nor does the accompanying written piece.

Some images would have been better left in colour whilst others that would have suited black and white are rendered up in glorious faux Instagram shades. Further reading does not change the first impression. There is a lot of poor photography from good photographers in here.

How can I judge what is 'good' and 'poor' photography you ask? Of course Rouleur has built its avant garde reputation on what could be called the 'significance of the mundane'; the cropped Sidi clad foot here, the patch of wall with a discarded flag and the shadow of a passing rider there.

Unfortunately there is a fine line between mundane shots loaded with extra meaning and mundane shots that are just mundane. Rouleur's pack of photographers have all used the set Rouleur approach here: two parts Henri Cartier-Bresson with a little Martin Parr thrown in. The problem is Henri C-B allegedly set up more 'decisive moments' than he ever stumbled upon and Martin Parr is a one trick pony lovingly replicated by everyone with a camera phone and fill in-flash. The occasional shot of a grizzled patron or an abandoned wheel can set the stage, but when such shots actually become the stage there is something lacking. I don't expect Rouleur to want to drop in dreary flat long lens peloton shots - that's what the news snappers are for - but some Bert Hardy level action shots were totally possible with the talent on hand. When a story on the loveable Carlton Kirby features only the back of his head and the only shot of the eventual winner Froome is of him seated seen through a tinted window at rest it's just not good enough. It's putting the art before the sport.

Cleverly talks about not being able to collect accreditation for one stage and being denied access for himself and two photographers but when access is granted at the end of the Tour the shots are very poor. Geoff Waugh's work on Voigt and Van Poppel aside, Cleverly would have been better off tasking all the photographers to shoot all the stages as a team and picking the best shots from the pool of talent - rather than treating them as auteurs and gifting them the poisoned chalice of single stages. No-one delivers great work every day - especially on foot in the moving circus of pro cycling.

On the whole the writing is better than the photography but it's a mixed bag too. Richard Williams writes well as does Geoff Waugh and Cleverly on Mr Kirby but shoe horning the inevitable Apocalypse Now quote into a story (not the Napalm one - the other one about not getting off the boat) isn't good.

Not as bad however as telling a story about Iljo Kiesse winning after his chain came off during the Tour of Poland when it was the Tour of Turkey.

Of course, the whole endeavour may be so achingly cutting edge that it's just me that doesn't get it, but what my emperor's new clothes detector tells me is the game plan for this annual didn't quite match the dream and it shows. Such is life.

Rather apt in this case, the best quote from Apocalypse Now is when Kurtz asks Willard, 'Do you think my methods are unsound?' and Willard replies, 'I don't see any method at all.'

Okay but not great photo collection from the hundredth Tour de France.