In contrast to Jan Cleijne's Legends of the Tour book, Le Tour de France: The Official History takes a more conventional approach to telling the story of the race, although it still has some worthwhile points of difference to comparable books (of which there are a few).

First of all, with this latest edition it becomes the most up-to-date printed history available – for now at least. The book is essentially the same as you would find in the altogether more lavish package The Official Treasures, but Official Treasures has not been updated since 2013, and costs £30 more.

A second point of difference is its status as the 'official history'; this seems to be primarily about paying money in a licensing agreement rather than giving the ASO (the Tour's organiser) editorial control, or gaining access to hitherto unknown secrets of Le Tour – but the result is certainly worthy of the ASO's endorsement. 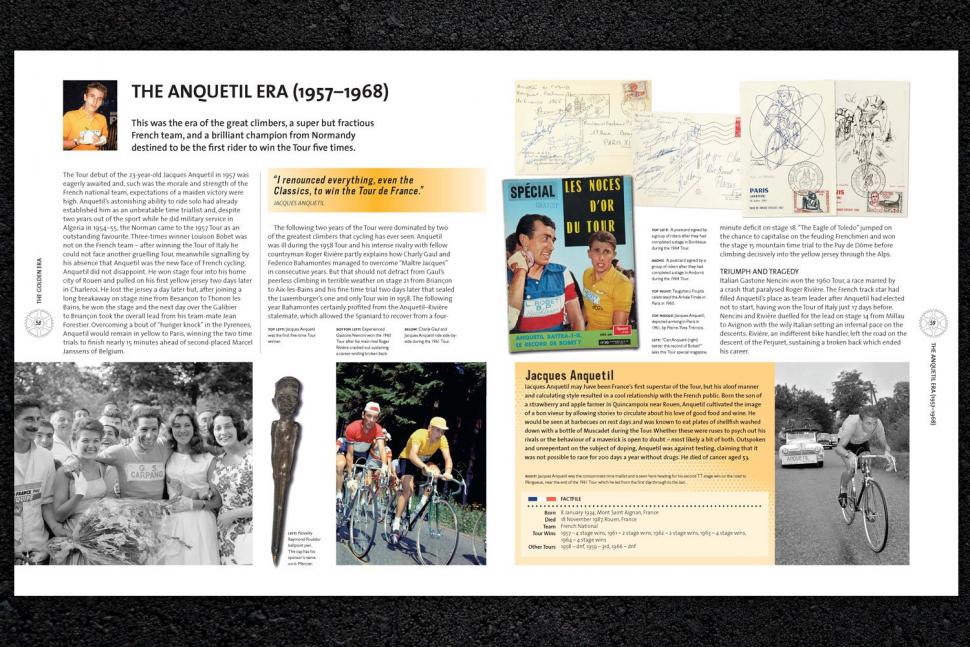 Each edition of the book brings in new authors to provide the updates, and this time respected British journalists Luke Edwardes-Evans and Andy McGrath add to the good work already produced by the main author, Serge Laget, and the previous contributors.

As you might expect in a book of this length, you don't get a detailed account of each stage – or even of each race. Instead, each chapter groups together a number of years under self-explanatory headings, such as 'The Merckx Era' or 'The British Era', and tells the story of the Tour both on and off the bike. There is plenty of material for both aspects, especially when politics were involved. 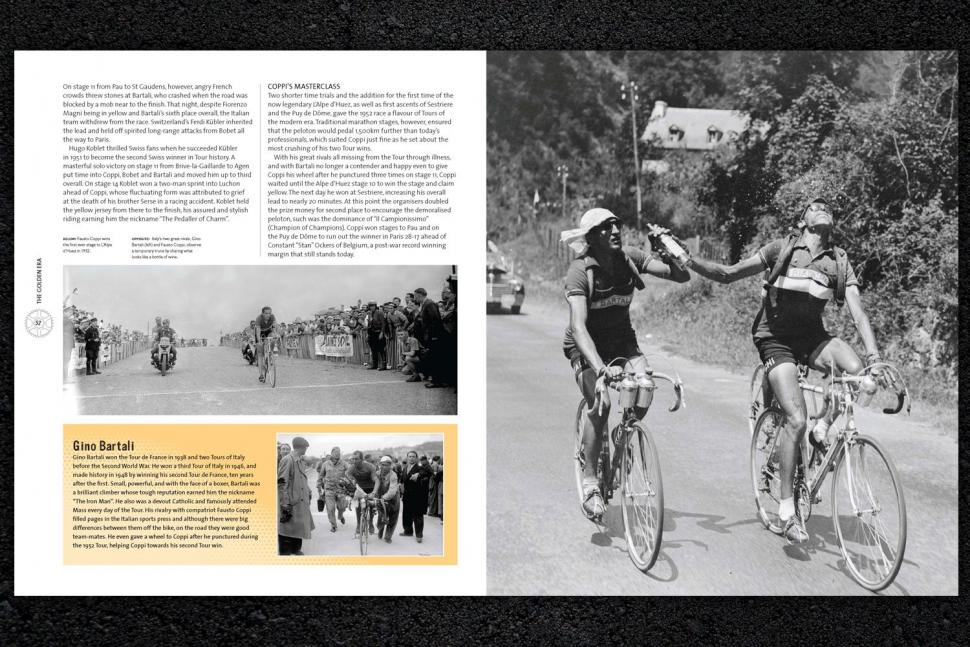 For example, in the chapter called 'Wartime Hiatus', we learn that l'Auto (the newspaper that started Le Tour) was closed down by the government because it was deemed to have collaborated with 'the occupiers' during WWII, which meant that the government owned the rights to run the Tour – but chose not to in 1946. Instead, two rival newspapers each ran a shorter stage race: La Course du Tour de France and Ronde de France.

Neither event was using the Tour de France name, and neither appears in the official Tour de France results – but they are important because the team behind the more successful of the two, La Course, won the rights to organise a 'proper' Tour de France the following year.

Within the space available, the Official History can only take you so far with that story, but if you were interested enough to find out more – such as in Feargal McKay's more detailed, non-illustrated and altogether drier book – you would discover that the winning team included Émilien Amaury (the 'A' of ASO) and Jacques Goddet, two names that would help to shape Le Tour for many years to come.

While some of the more controversial topics from the Tour's history are mentioned, there is little detail about them. For example, the 'decision to break all ties with the world governing body (UCI), and bring in officials from the French federation to run the race under national rules' in 2008 is one of many examples of the longstanding power struggle at the top of the sport, and is worth a chapter to itself.

The Tour benefits from being one of the most photographed cycle events, giving book publishers a good selection of images to choose from. An impressive number are duly included here: all are credited to Presse Sports/Offside Sports Photography, and we are given much more variety than the familiar racing shots. The non-racing images range from the predictable – such as posters, newspapers, and cartoons – to the unexpected – stamps, licenses, coins – but all are relevant to the Tour, and provide interest beyond the racing. After the chronological overview of the event, there are chapters that focus on the stories behind some of the race's well known icons, such as the jerseys – including the short-lived Combination jersey – and significant mountains. The biggest climbs may have been included since 1910, but the 'Hors Catégorie' label given to them was only actually introduced in 1979.

> Essential reading for every type of rider

A quick overview of the bikes used in the event covers the well-known stories about the organisers providing a standard bike to all riders in 1930, the refusal to allow derailleur gears until 1937, and rounds off by extolling the virtues of disc brakes, 'with numerous pro teams expected to roll out on the new bikes with discs for the 2017 season'.

Further chapters about team sponsorship and the publicity caravan are examples of how the book goes beyond the racing to give a more complete picture of Le Tour. The book finishes with several pages of 'Records and Statistics', which acts as a reminder about the lack of consistency in the treatment of drug cheats in recent Tour results: Lance Armstrong's results are shown with an asterisk, because 'the UCI decided not to reallocate his titles', yet the asterisk beside Alberto Contador's 2010 victory are because he 'was stripped of his victory and Andy Schleck was named as the winner'. The earlier victories of (for example) Bjarne Riis, Jan Ullrich and Marco Pantani don't get an asterisk or a comment.

This book gives a good overview of the Tour and its history, and will suit the needs of all but the most committed follower. However, anyone using it as a starting point to go in pursuit of greater detail will find that there is no bibliography to help them.

* We have five copies of Le Tour de France: The Official History to give away – check out our Facebook page to see how one could be yours...

Le Tour de France is a celebration of one of the world's most famed annual events. Generally considered to be the greatest test of endurance in the sporting world, the Tour de France covers more than 2,200 miles in just over three weeks, climbing high into both the Alps and Pyrenees on a journey around France and briefly into neighbouring countries before ending on Paris's infamous Champs-Élysées.

This brand new edition, with new features and stories, comprises an authoritative narrative account of each major era up to and including the 2016 Tour with more than 300 photographs, some dating back to the nineteenth century. There are features on the superstars and memorable moments for each era. The photos include souvenir brochures, period newspapers, posters, stickers, postcards and items of correspondence, together with action shots of all the major stars both in the saddle and associated with what is universally known as Le Tour.

At £20 it's not bad value, and even better deals are often available.

Does its job well, and will suit most people's needs most of the time.