Tour de France: Climbs from Above

In Tour de France: Climbs from Above, Richard Abraham takes a selection of the major mountain climbs that often play a key part in deciding the outcome of the Tour de France, and explains why they have been so decisive, and who has made them so decisive. This is all illustrated with a mixture of photos and 'new technology' satellite images. The result is a little different to the other books about Tour climbs, and it will enhance the viewing experience of certain stages come July.

Climbs from Above is the first book to come my way this year to leverage the Tour de France name. First published in 2016, this second edition updates a few of the stories and pictures, but otherwise little else needed changing.

The book promises to feature '20 notorious Tour de France Hors Catégorie climbs', but in fact you get reduced coverage of an additional three. The bonus climbs are Col de Sarenne, which provides a quieter and more scenic route to the Alpe d'Huez ski resort than the better known approach; the Col du Lautaret, which is on a relatively fast and busy road but is a necessary stepping stone when approaching the Col du Galibier from the south; and the Col du Soulour, which is either an intermediate lump on the way to Col d'Aubisque when approaching from the east, or a relatively easy extension to it from the other direction. 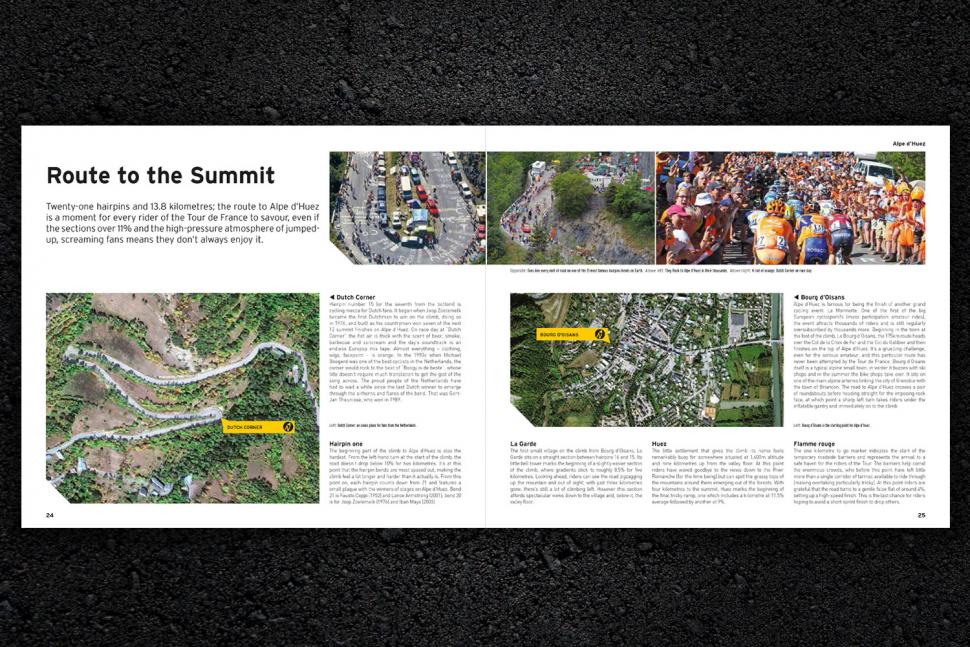 For each climb you get the basic information and statistics, a gradient profile, a condensed history of the role it has played in le Tour – and a brief biography of some of the riders who made history on its slopes. This is complemented by a good selection of well-chosen pictures. Most of the images come from the Offside photo agency, so you may have seen a few already in other publications.

What sets this book apart from any similar ones about Tour de France climbs is the use of 'Google Earth's high-definition satellite imagery' – the very same that many of us use on our computers. A similar format was first used by the publishers for a book about Formula One circuits, and it does make a strong visual impact. For each climb, the race route is superimposed onto the satellite image, along with gradient details for every kilometre. 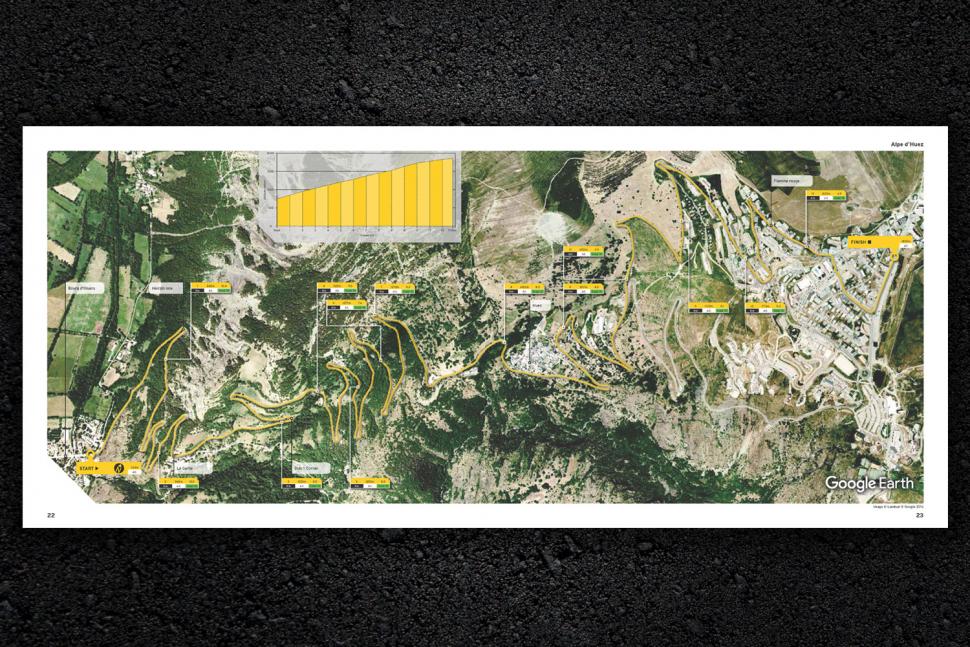 While the use of satellite imagery is different, it is not always an improvement when used in print. If you actually wanted to plan your own trip, a normal map will serve you better by providing more information about road numbers and place names; if you want to zoom in on the satellite image for greater details then a computer is required.

I would say that this book might not supply all the information that you need if you were making plans to tackle the climbs yourself – I would still use Daniel Friebe's Mountain High for that – but few books would do as good a job of inspiring you to undertake the challenge in the first place.

With Abraham being limited to 20 (plus 3) climbs, only the most important ones could be included. The principle he worked to is that all of these climbs have received the Hors Catégorie (or HC) grading. I think he has made a good selection, and it would be hard to think of a climb that was more deserving than any of those featured – with one qualification. If you wanted a wider selection then little can beat Simon Warren's 100 greatest climbs of the Tour de France.

My one exception would be Col de Portet, which is making its debut in stage 17 of this year's Tour. It is fully deserving of its HC status, but was announced too late to make it into this book.

Once the peloton has seen Col de Portet then Pla d'Adet might not seem so bad; it is in the book, but the latter will surely be joined by (or even replaced by) the former in a future edition. Both climbs share the first 7km and 665 metres of climbing up to Espiaube; it only takes another 3.5km and 200m of climbing to reach the Pla d'Adet ski resort, whereas the altogether more challenging road to Col de Portet takes another 9km to climb a further 725m.

> Buyer's Guide: 24 of the best books about bikes and cycling

One cautionary note is that a climb's grading can depend on the direction from which it is approached and where it is positioned in a stage. While some climbs will always have HC status (typically those that can only ever be used as mountain top finishes), others might be promoted or relegated occasionally.

Take Cormet de Roselend as an example: it is in the book, and if the race route went straight to the top it would normally be HC. However, this year stage 11 of le Tour is taking a detour to the Col du Pré on the way up, meaning that it takes the HC status and Roselend falls back to a second category.

Another example from the book would be the Col de Peyresourde, which only achieves a category one status this year, presumably because of its position early on stage 17 – and by early, I mean the first 13.5km.

I noticed that some of the distances seemed to be slightly different from what I remembered when planning routes over these climbs. I can understand why this is the case for Alpe d'Huez, where both the start and finish points are debated, but it can have a knock-on effect on the average gradient claimed. The range goes from 13.1km in Friebe's book, through 13.2km in Warren's book, 13.8km in this book, 14.5km in Chris Sidwell's Tour Climbs, to 15.2km in Rapha's The great climbs of the Northern Alps. The official TdF distance on the stage profile promises 13.8km – which also matches the local tourist office.

Let's try one where there is less opportunity for debate, the Col de la Madeleine. We will have to look at the southern approach from la Chambre, as Abraham only ever gives information on one side of a climb, even though le Tour often uses the other side – as it does this year: 19km says both Abraham and the Tour's official website, with 19.2km from Warren, and 19.3km according to Sidwells, Rapha and Friebe (although they still manage to be 0.1% apart on the average gradient).

If you are watching others racing up these climbs then these differences of opinion won't really matter to you, but if it is you on the bike then any unexpected extra distance can be demoralising. I have always found that the kilometre boards along the roadside are very reliable, so perhaps they should be your definitive guide.

With an extensive index to help you find your way through the wealth of facts, figures and stories about le Tour, this book would make an ideal companion for anyone wanting be better informed about the most significant climbs to appear in le Tour. It can justify its claim to be 'the definitive visual companion' to the race for the handful of HC climbs that will be used each year.

Make and model: Tour de France: Climbs from Above by Richard Abraham

Experience the thrill and intensity of the Tour de France's most challenging climbs using the breathtaking photography of Google Earth. In Tour de France: Climbs from Above with Google Earth, 20 notorious Tour de France Hors Catégorie climbs - ascents that are beyond classification - are illustrated using Google Earth's high-definition satellite imagery.

There are more than 220 photographs, providing a unique aerial guide to the twists, turns and topography of each climb and the beautiful surrounding mountain geography. Written by cycling journalist and author Richard Abraham, the Tour de France: Climbs from Above with Google Earth explains in authoritative detail the history and challenges of each legendary ascent and is the definitive visual companion to the Tour de France's greatest climbs.

The chance to look at some old friends in a new light thanks to satellite images.

The limited number of climbs that are covered.

A worthwhile addition to books about the Tour de France.