Legends of the Tour by Jan Cleijne

Legends of the Tour

8
10
Jan Cleijne's book is quite unlike any other history of the Tour de France, and all the better for it
Weight:
527g
Contact:
headofzeus.com
How we test

I must admit that I was less than excited when I heard about yet another history of the Tour de France, but Legends of the Tour is different: it is in strip cartoon format, which – to my knowledge – makes it unique. There has been at least one previous attempt to depict a single Tour through the medium of painting by Greig Leach, but never a complete history.

Dutch author Jan Cleijne's book speeds you though the entire history of le Tour, focusing only on the major events. Not surprisingly, coverage appears to be superficial, except that there is a lot more of interest to be found in the pictures.

I do think that the book will work much better if you already know a bit about le Tour, as then you can really savour the drawings and appreciate all the little references included in some of the illustrations. For example, Didi The Devil appears, though he is never actually mentioned.

A little knowledge is also essential if you want to be able to recognise everyone featured: the likenesses may be good, but – as I found – that is of no help if you don't know all those involved. 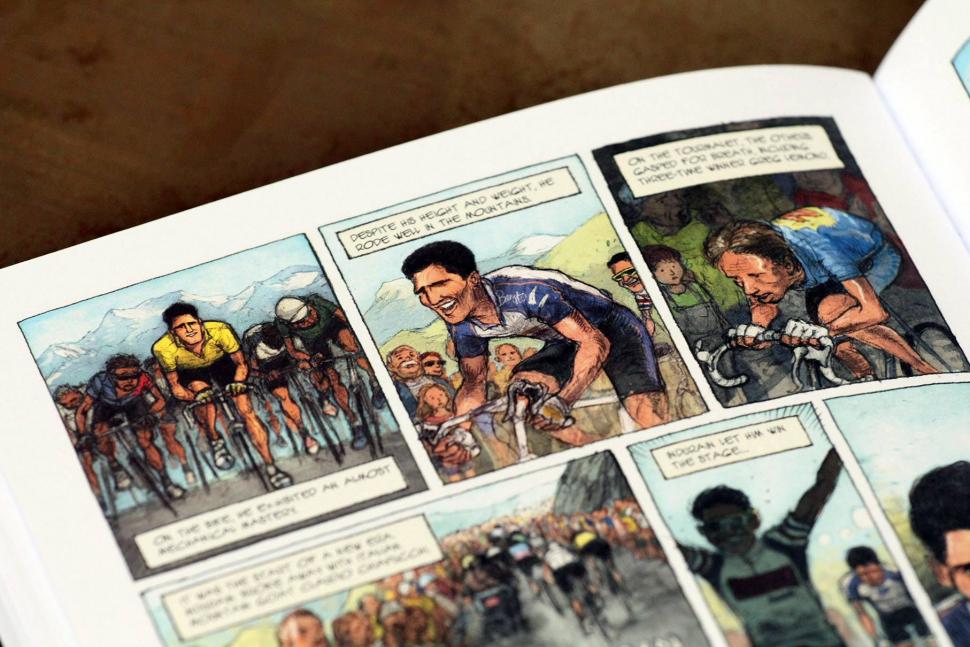 As you can see here, the headings of the 10 chapters give a pretty good idea of what the focus is going to be: there can only one subject in The Cannibal chapter, and would Mont Ventoux be about anything other than Tom Simpson?

I thought that with pictures of wind tunnels, aero bars and disc wheels, the chapter called Top Gear was heading off into the world of new technology, but it is about a different type of scientific advance: the arrival of EPO into the peloton.

This is followed by drawings of something that does not sound promising, but which marks an important moment for the sport: Christophe Bassons during his contract negotiations. He is used to represent the sport fighting back after the Festina affair. Bassons is renowned for riding clean, which cost him money and ultimately his career: 'Bassons had been offered a choice of two contracts...with doping or without doping. He rejected the EPO contract and settled for ten times less pay than his teammates.'

Cleijne describes himself as 'an illustrator, comic strip maker and amateur racing cyclist'. The book appeared in his native tongue as Helden van de Tour in 2013, then was updated and translated into English in 2014 with the help of a grant from the Dutch Foundation for Literature; I recall that it gave similar support to The Rider when known as the Foundation for the Production and Translation of Dutch Literature. As a 'graphic novel', it is the pictures that dominate, with relatively few words on offer – which is perhaps why the Dutch Foundation was happy to fund translations into German, Danish, French, and Spanish as well.

There are some minor errors – which maybe crept in during the translation – for example, the story about Wim van Est crashing and falling down the side of a mountain in the 1951 Tour has been told many times: his team used all their spare tyres to create a rope to rescue him, but then had to retire from the race through their lack of tyres. The translation refers to the use of 'inner tyres knotted together', but it is probably referring to tubular tyres.

This book has been out for a few years now, and even with the last update to the tables of results at the end of the book (in 2014), Cavendish's stage win tally is 'only' 25, with Froome on one overall victory: both of those scores could become even more out of date this year. However, no one is going to buy this book for the results, and in my view they just risk dating the book faster than is necessary.

This book should be appreciated as a work of art more than as a history of le Tour: it may not take long to just read it, but appreciating everything that is going on in each picture will take a while.

Jan Cleijne's book is quite unlike any other history of the Tour de France, and all the better for it

Make and model: Legends of the Tour, by Jan Cleijne

From Head of Zeus:

"Frame by glorious frame, this beautiful graphic novel captures the essence of the Tour de France – the grit and the glory. Since Maurice Garin's inaugural victory in 1903, hundreds of thousands of kilometers have been covered in pursuit of the yellow jersey and few of them have been without incident or drama. Here are the Tour's legends: Eugene Christophe welding his bicycle back together at the foot of the Pyrenees in 1913; Bartali V Coppi, 1949; Poulidor shoulder-to-shoulder with Anquetil on the Puy de Dome, 1964; Tommy Simpson's death on Ventoux, 1967; Lance Armstrong's domination and disgrace; finishing with Bradley Wiggins' and Chris Froome's victories back-to-back victories for Britain in 2012 and 2013."

Title: Legends of the Tour

A new and different way to cover the history of le Tour.

If you don't have sufficient knowledge you won't appreciate every reference and subtlety.

Very different and very good – and a good complement to any other book about le Tour.