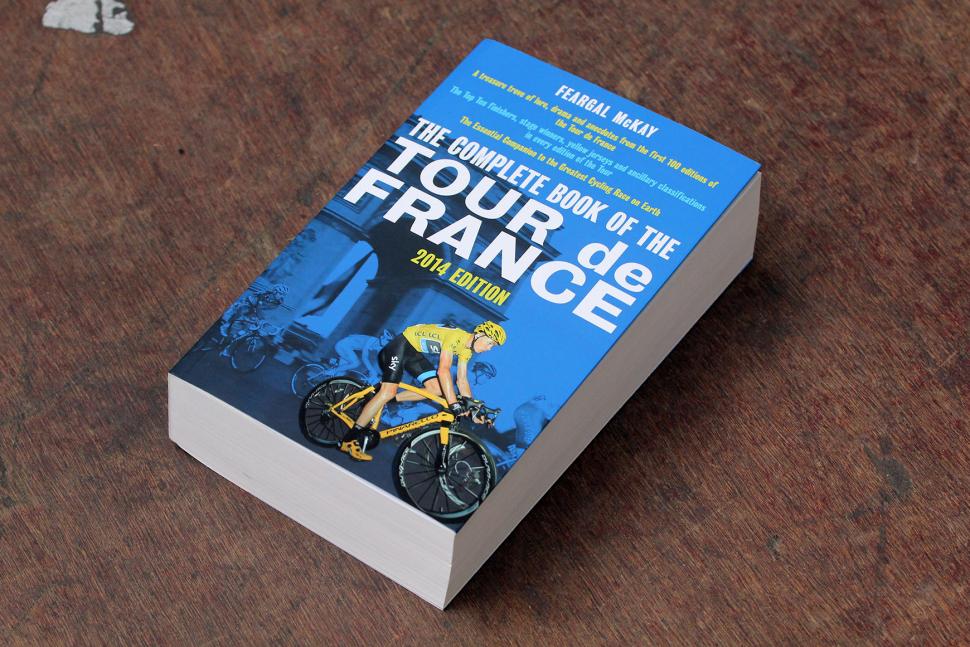 The Complete Book of the Tour de France

The Complete Book of the Tour de France by Feargal McKay

7
10
Brings a lot of useful information together in one convenient package, though there's little new here
Weight:
953g
Contact:
aurumpress.co.uk
How we test

Claiming to be "the essential companion to the greatest cycling race on earth", Feargal McKay's Complete Book of the Tour de France is a substantial book that gives some key facts and figures for the first 100 editions of le Tour, along with a necessarily brief narrative about each race.

While le Tour may indeed be the greatest cycling race, one could dispute the claim that this book is essential, or even complete. It is however a very convenient record of past races, and it certainly contains a lot of the facts and figures that such a race produces. Here are some examples of what you get:

- The name of every stage winner and yellow jersey winner for every day of every race
- The basic time and distance statistics for every stage
- Where relevant, a note of any major climbs on the stage, and who led the race over each one
- The top 10 riders in the final general classification
- The final winners of whichever other jerseys or competitions were being contested in that year (which has varied over the years), including the team prize
- Last but not least, the winner of the Lanterne Rouge (couldn't resist that one!) Incidentally, should such a competition really have a 'winner'? How about the 'holder' of the title?

The facts continue at the back of the book with some further information, such as which individual and nation has won the greatest number of each jersey, the greatest number of participations in a cyclist's career, or the region of France to host the greatest number of Grand Departs. Given that the book came out just before the 2014 race, it became out of date almost immediately, and will only become more so. The book is referred to as the 2014 edition, but there have been no previous editions, and there are no definite plans to produce a new edition immediately.

As you can imagine, after 100 editions of the race there is a lot of data available. However, in order to make the book "more than a dry compendium of names and numbers" there is also a three or four page summary of each year's race. The extensive bibliography is evidence of considerable thought going into those few pages. However, since "the story of each tour could easily fill a book on its own", this narrative has to be selective about what can be covered, and the issue of doping gets a great deal of that coverage.

The author's stance is that "doping did not begin with the Festina affair and end with Lance Armstrong". Matters may be improving, but we are not at the point where "not every stunning performance is immediately met with questions about doping." Equally, just as it seems that you can't talk about cycle racing without mentioning doping, you certainly can't refer to doping without mentioning Lance Armstrong.

Throughout the book Lance's name remains, but it has been crossed out (using a single strike-through), with a note that the position has been "vacated" with no other name given. Others have been similarly erased, such as Albert Contador and Stefan Schumacher, but in most cases there is a replacement name. One of those replacement names is Alejandro Valverde. Has le Tour got it right with this policy, or has it got itself into a muddle because we did not know all of the facts at the time, and probably still don't have the complete picture?

Each year's race has a chapter to itself, and every chapter has a title – and those titles could be the basis for a whole new game called 'Guess the year'. It would be quite a task to encapsulate each of the 100 races into a handful of words, but the job has been done well. Some are obvious, such as Death on the Mountain for 1967. Others are almost ambiguous, such as The Big Con: 2005 was the year chosen for that one. I thought that something to do with 8 seconds would be a certainty for 1989, but since Thirty-Eight seconds had been used for 1968 they went with A Game of Chess instead.

Brings a lot of useful information together in one convenient package, though there's little new here

Make and model: Aurum Press The Complete Book of the Tour de France by Feargal McKay